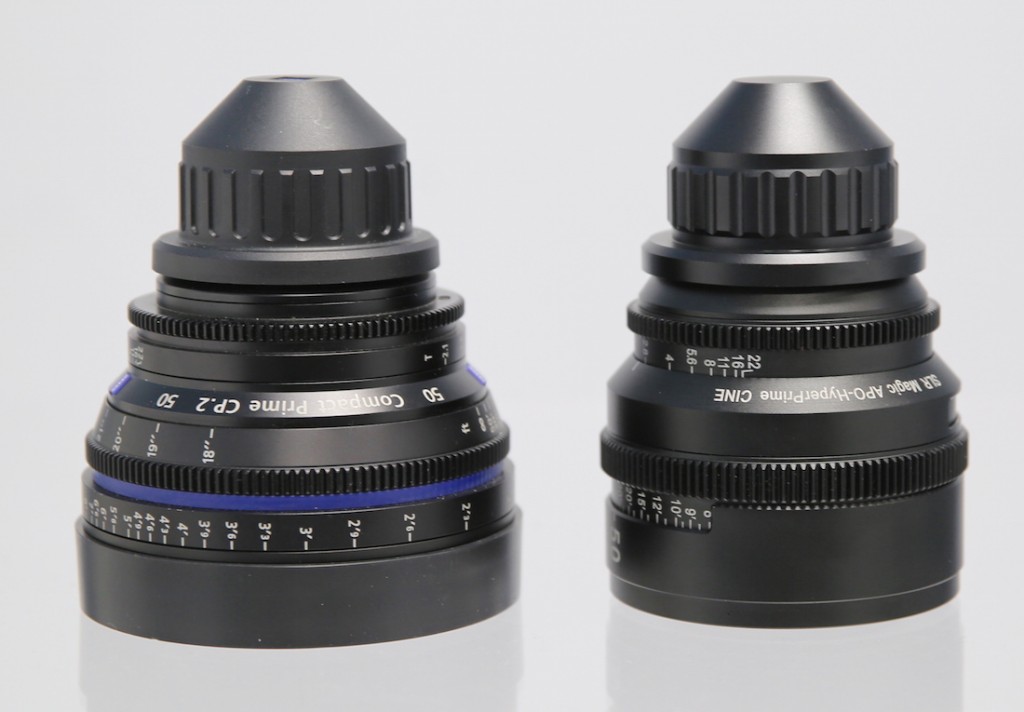 About a year ago, Andrew from SLR Magic came and spent a couple of days in our lab, testing some of the SLR Magic lenses and getting input on improving the optical adjustments on their lenses. At the time Andrew made it clear their company wanted to up their quality and compete with the better lenses on the market. He contacted me a couple of weeks ago to let me know he was sending a copy of their new 50mm APO T2.1 Cine lens for optical bench testing.

During our conversation it became very obvious that Andrew was very comfortable this new lens was going to test very well. You know me, there’s nothing I like better than using our optical testing equipment to crush the comfort right out of a manufacturer, so I was pretty eager to take a look at this lens.

While this isn’t a review, I will say the SLR Magic lens was mechanically well made with smooth, steady resistance focusing and aperture rings and had a nice compact size. As an apochromatic lens, one of its major advantages is that longitudinal chromatic aberrations are neutralized, so out-of-focus highlights in both the foreground and background remain color-neutral. But this lens is also designed to be high resolution, capable of shooting excellent 6K images, so some MTF testing seemed in order.

We will compare the SLR Magic 50mm T2.1 with a couple of similar lenses: the Zeiss 50mm T2.1 and the Leica 50mm f/2 APO Summicron-M. While I don’t know what the final pricing on the SLR Magic 50mm will be, I assume it be similar to the Zeiss CP.2 (about $4,000) and certainly less than the Leica (over $8,000). Let me note that we tested a single copy of the lens, so I can’t make any comments on sample variation.

As you can see in the MTF comparison below, the SLR Magic lens definitely is holding its own with the Zeiss 50mm. In the center of the image they are nearly identical at lower frequencies, while the SLR Magic lens is actually a bit better at higher frequencies. The Zeiss holds it’s higher frequencies a bit better in the middle 1/3 of the image. The SLR Magic is superior in the absolute edges. (Remember, the 20mm distance from center we show would be at the very edge of 35mm full-frame edge image. If you are shooting a smaller sensor the outer areas of these MTF charts don’t matter to you.) 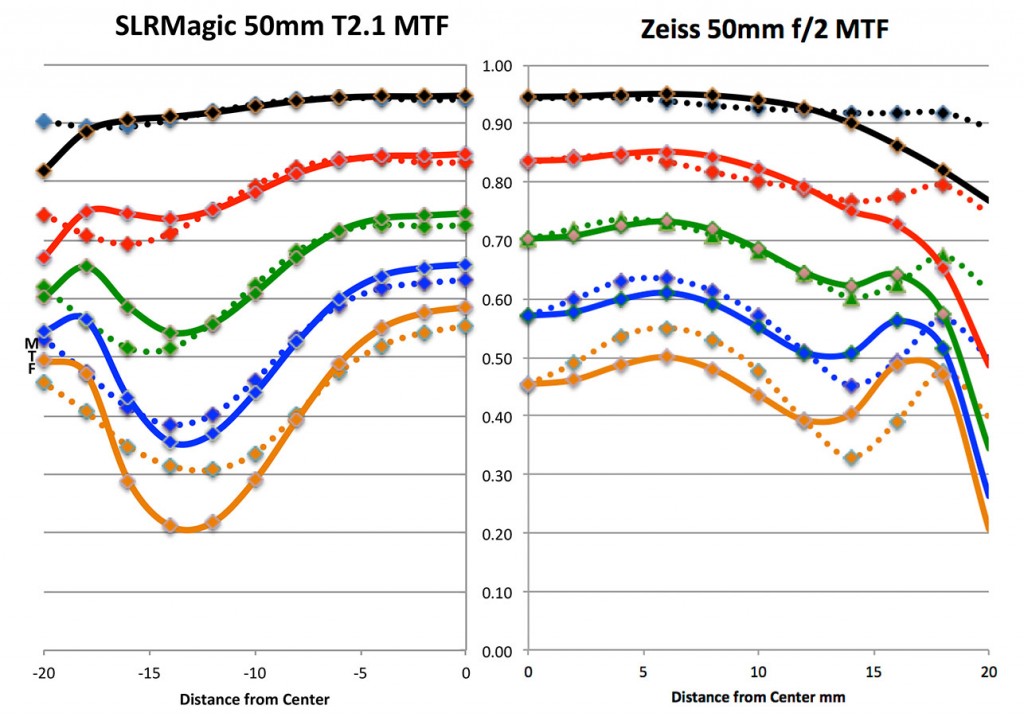 The 50mm Leica Summicron-M f/2.0 is arguably the best 50mm lens we’ve tested, particularly at higher frequencies. When we compared the SLR Magic to the Leica, the results shocked me a little – not that the Leica was better, but that the SLR Magic lens was actually fairly close to it, except at the higher 40- and 50- line pair/mm frequencies. That’s an outstanding performance. 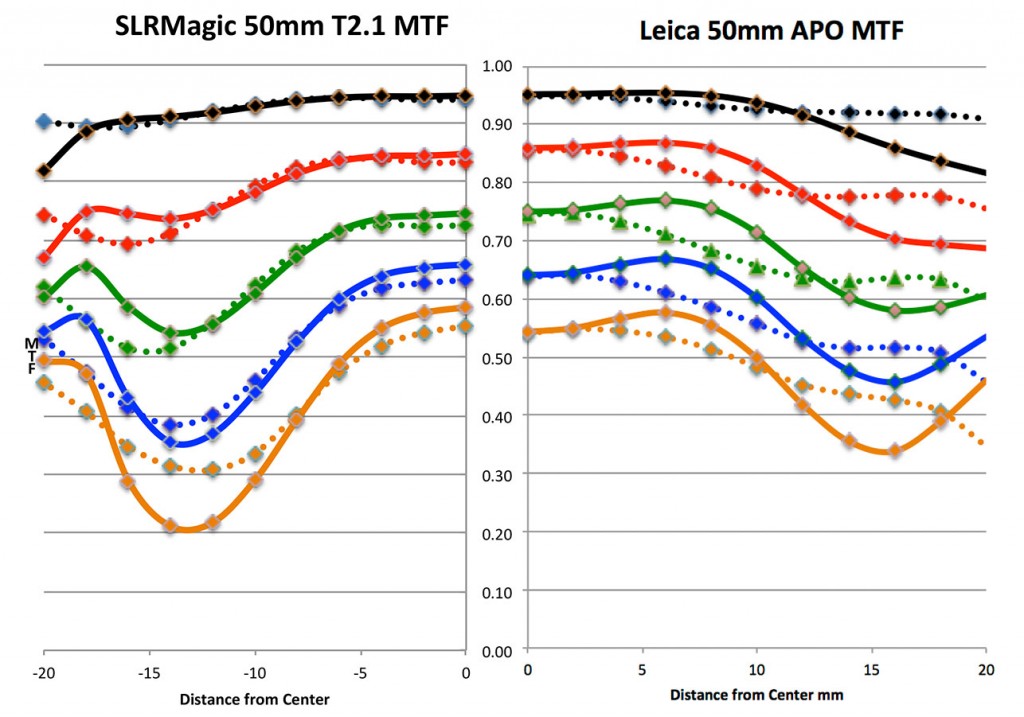 As long as we had it on the machine, we did field curvature maps of the SLR Magic 50mm, too. They were very nice, with tangential and sagittal fields very similar, as you would expect from the MTF curves. The field curvature demonstrates that this lens is designed to give a nice flat field from edge-to-edge with just a tiny bit of ‘mustache’ curvature. This particular copy had just a very slight amount of tilt in the field (0.01 degree), which is excellent — we don’t think anyone could notice less than 1 degree in an image. 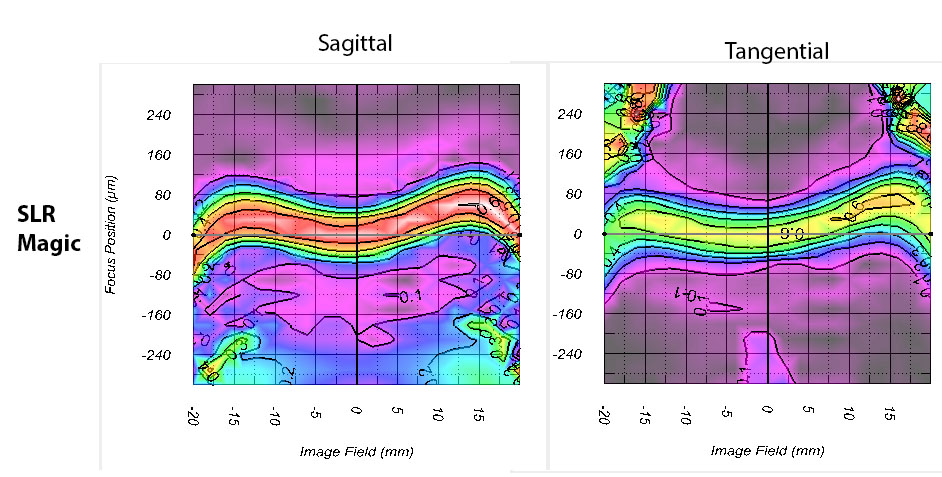 A Bit of Summary

This is not a lens review but since we are able to do these tests and most reviewers can’t I thought them worth putting up. When we met with SLR Magic way back our primary input was on methods to minimize copy-to-copy variation. Testing one copy doesn’t give us any insight into the progress they’ve made there (although I completely agree with the steps they’ve taken and am optimistic). However, the perfectly flat field with no tilt in this sample gives some evidence that things are looking good. With many lenses almost every single copy has some tilt.

Until final pricing is established there’s no way for me to say if this lens is a bargain or not. But assuming the price is reasonable, it certainly provides excellent image quality from an MTF standpoint. Some early reviews indicate the goals of the APO lens in removing color aberrations have also been met. It looks to me like SLR Magic has upped their game quite significantly here.