We’ve finished, mostly, our fairly long series of articles on SLR prime lens variation. We started with prime lenses for several reasons. They are much quicker (and quicker is a relative term here) to test than zooms. They are simpler lenses and we expected that meant they would have less variation. We learned a lot doing the prime lenses and now feel we’re ready to start looking into the more complex of zoom lenses.

Before we get ready, there are a few things that have to be mentioned. Many zoom shooters like to say their zoom is ‘as good as a prime’. It may be, depending upon what focal length you’re using and what lenses you’re comparing. It’s really unlikely if you are picky, but it may be true if you compare the right zoom to the right prime at the right focal length. Modern zooms are amazing lenses and the more I learn about optics, the more amazed I am that they can be as good as they are.

But there are some general realities of zooms that I want to put out here before we get started. If these facts raise your blood pressure and make you get all worked up, then there’s probably no reason to read further – you’ll just get upset. But if you’re the kind of photographer that wants to know the strengths and weaknesses of your tools so that you can use them best, I think you’ll find this stuff useful.

Remember, as always, that these results are from an optical bench, not from an Imatest or DxO lab. That means they’re going to be different than what we, or others, have previously published for a couple of reasons. First, this is a test of just the lenses, not the combination of camera and lens. These results aren’t influenced by comparing one lens on a certain body and another lens on a different body. Second, the optical bench tests at infinity focus, not 10 to 20 feet where most Imatest work is done.

Today we’re comparing the Canon 24-70mm f/2.8 Mk II L, the Tamron 24-70mm f/2.8 VC, and the Nikon 24-70mm f/2.8 AF-S lenses. As we’ve been doing, the MTF curves are the average of 10 copies at each lens, with each copy tested at 4 different rotations. Each lens is tested at both ends of the zoom range and in the center of the zoom range. (BTW – I’ve tried a couple of different ways to present this data. Please give me any input you may have. But if you’d rather do direct comparisons, all these curves will also be up on The Digital Picture’s MTF  Comparison Tool.) For those of you reading on small screens, I’m afraid you may have to scroll back and forth a bit to see all three MTF curves, but putting them three abreast makes the comparison much easier.

A couple of things should be readily apparent. First, all three of these zooms are weakest at 70mm. For the Canon and Tamron lenses, some things are better at the wide end and some better at 50mm, but overall the Tamron is probably at it’s very best at 50mm. At all focal lengths the Canon is slightly better than the Tamron, but it’s a pretty close match. The Nikon is an older design and it shows. In the center at wider focal lengths, it’s as good as the Canon and right in the center at 50mm it’s the best of all. Off-axis, though, it has more astigmatism than the other lenses. At 70mm it just isn’t as good as the other two, dropping MTF quite a bit more than the other two lenses.

I think the MTF graphs do a lot to illustrate one reason there are so many ‘which lens is better’ arguments on the internet. Someone shooting the Nikon 24-70 at the middle of the zoom range and concentrating on subjects in the center of the lens is going to say they’re lens is awesome. Someone shooting it at 70mm may well think it’s not so great. But another reason for those ‘which lens is better’ arguments is sample variation, so let’s look at the consistency numbers for those same lenses.

Overall, I’d say things met my expectations. Just looking at the consistency numbers it becomes apparent that there’s more variation at 70mm for all three lenses. There’s practical value in knowing that both variation and resolution are weakest at 70mm. A lot of photographers have other lens options in their bag they might consider when they’re going to be shooting in that 70mm range. I think it’s also worth remembering not to generalize your lens. These 24-70mm zooms, like every other zoom we’ve tested, do NOT perform the same throughout their entire range.

The way in which copy-to-copy variation occurs is also interesting. Notice that the Canon varies as much in the center at 70mm as it does across the rest of the frame. This means the Canon, at 70mm, is varying quite a bit in overall resolution rather than having a soft corner or side. The Tamron tends to have less center variation and more variation as you get away from center.

In general, though, this group of zooms did as well as I would have hoped, and particularly well at the wide end.

I generally present a lot of complex data. I want people to be able to see exactly what we did, how we did it, and show everything we saw; at least within reason. But I do realize that is overwhelming for a lot of people. They don’t want to try to decipher MTF curves. With that in mind, we’re going to start presenting some simpler summary charts. Like most summaries, they’ll be easier to compare. And like most summaries, they’ll leave out a bit of data. But I do think they’ll be helpful for a lot of people.

Below are 2-D MTF curves for the same lenses we tested above. This gives a good idea for how good the resolution is across the entire field of the lens, except the very tip of the corners (our MTF bench doesn’t quite reach there). For each lens, at each focal length, we’re showing 10 line pairs/mm on the left and 30 line pairs/mm on the right. (The rectangle in the center represents and APS-C size sensor.) 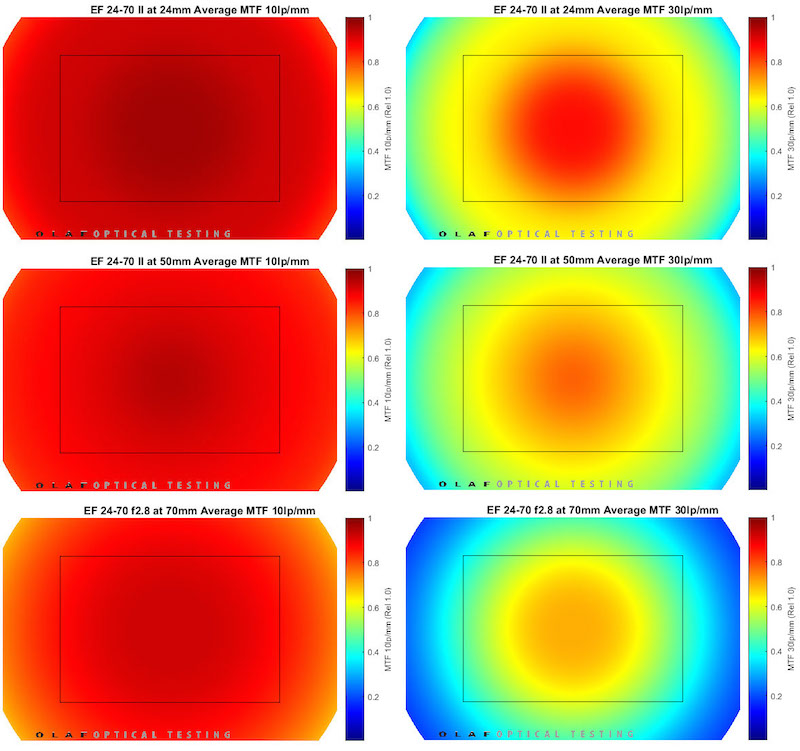 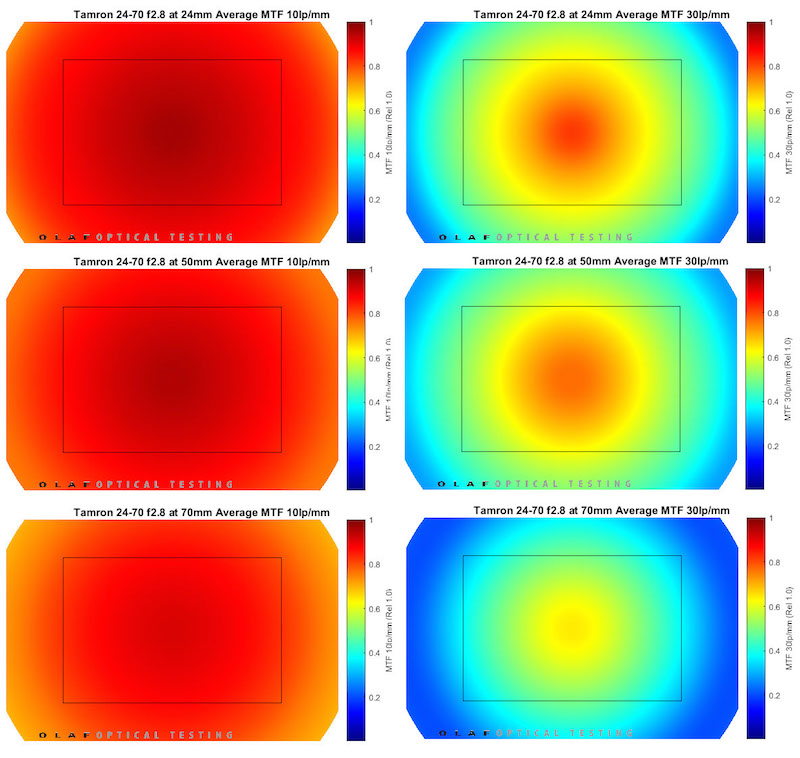 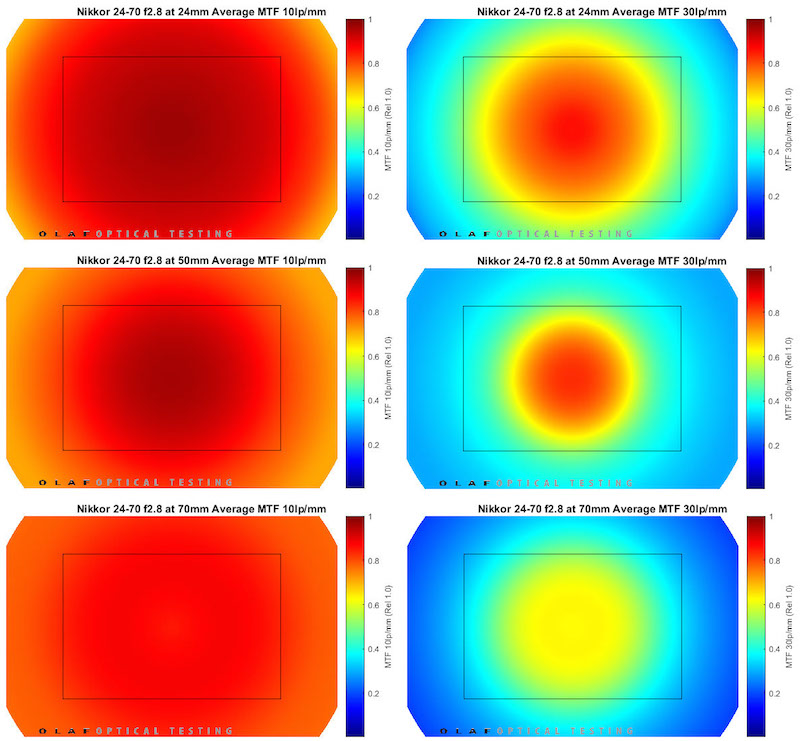 I want to emphasize that while graphs like this are nice, they do leave out a lot of data. For example, these show the average of sagittal and tangential MTF, so you don’t get any information about astigmatism. They only show 10 and 30 line pairs / mm. Still, they are a nice, quick way to roughly compare lenses. We’ll be using them going forward, and The Digital Picture will also be putting them up as an option in their Lens Comparison Tool.

We have also looked at putting this up as 3-D graphs. Below is the Canon 24-70mm at 50mm and 30 line pairs/mm for example. I’m not sure I’ll be using this very often, but it’s pretty so I thought I’d get your input as to whether you like it. 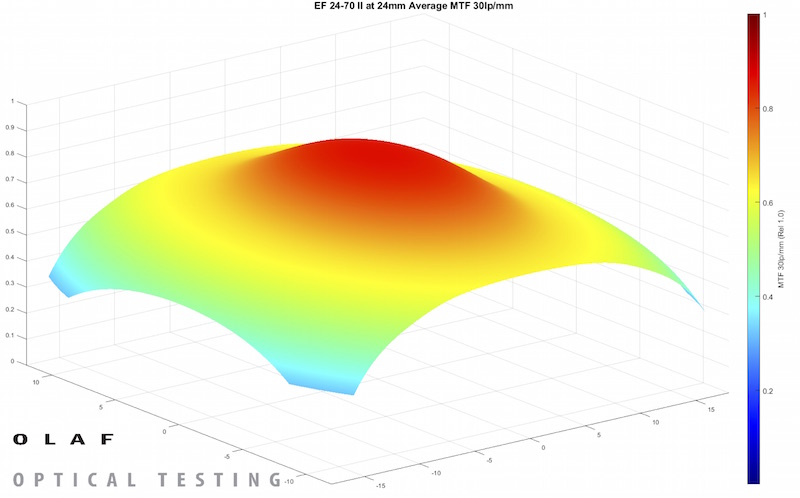