Like a lot of people, we were pretty excited to get our hands on the new Nikon 24-70mm f/2.8E ED AF-S VR lens. Compared to the other brand’s 24-70mm zooms, the original Nikon 24-70mm f/2.8 ED AF-S wasn’t quite as good at the outer part of the frame, and just wasn’t as good at 70mm. I expected the new lens would be at least correct those problems.

As always, this is an optical bench test of 10 copies of the lens. The MTF curves we present are the average of the 10 copies, each tested at 4 rotations. I would like to reduce the number of fanboys that are going to glance at the graphs and then head straight to the nearest forum without passing GO (by “go”, of course, I mean actually having a basic understanding of what we’re doing here) and tell everyone I just said a bunch of stuff I didn’t say. Again. So in case you don’t understand why these results are going to be different from that other site that said this was the greatest or worst lens in recorded optical history, let’s summarize.

If you don’t understand all that, or you want to know ‘so what’s the rating score’, you’ll be better off not reading this and going to a site that knows everything. If you do understand that this is a limited test that gives different data compared to what review and testing sites write about the lens, read on.

‘Glass in the path’, between the lens and image sensor is a variable that sometimes has a big effect on the image quality of a lens. With certain lenses (those with wide aperture and a short exit-pupil distance) it makes a big difference. In other lenses (smaller aperture and longer exit-pupil distances) it makes very little difference. It is our practice to check each lens to see if glass is needed to give the best MTF results. Testing with glass in the path is a bit more difficult and time-consuming, so if it makes no difference, we perform the tests without it. The other 24-70 zooms, including the previous Nikon 24-70 f/2.8 AF-S did just fine with no glass.

The new version did better with 2mm of optical glass in the imaging path. This is absolutely not a negative or positive thing since the sensors in Nikon cameras already have that glass in place. I mention it only because I try to be completely transparent as to our testing methods.

So let’s get on to the results and see how the new Nikon stacks up against the old one and the other recent 24-70mm f/2.8 zooms.

At 70mm there is no question the new lens (left) is significantly better than the old version (right). At 10 and 20 line pairs it clearly has higher MTF, even in the center of the image. Off center, it’s dramatically better at all frequencies. The old version has a bit higher MTF at the highest frequencies right at the center, but that’s the only place that isn’t improved on the new lens. 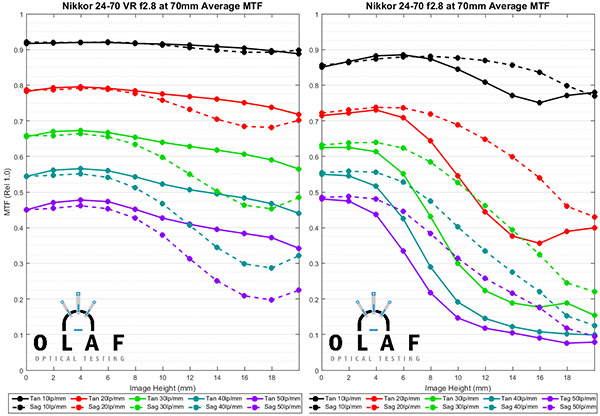 At 50mm (hold on to your hats, fanboys), it become pretty clear Nikon has made a design choice with the new lens, and the design choice wasn’t ‘let’s make it look great for the bench testers’. They’ve given up the absolute best center resolution in exchange for good resolution across the entire image field. So in the center 1/3 of the image, the old lens had better MTF results, but across the remainder of the field the newer lens is far superior. Not just that the resolution is better, but there is very little astigmatism, which the old lens had in spades.

I’m certain there will be screaming about ‘not as sharp’ both from Nikon shooters and from other brand fanboys who will gleefully visit the Nikon boards. But this seems to have been Nikon’s design philosophy lately. The will give up some absolute center resolution to get a nice corner-to-corner image. Lenses are always a trade-off, always. And this is a great example of that. 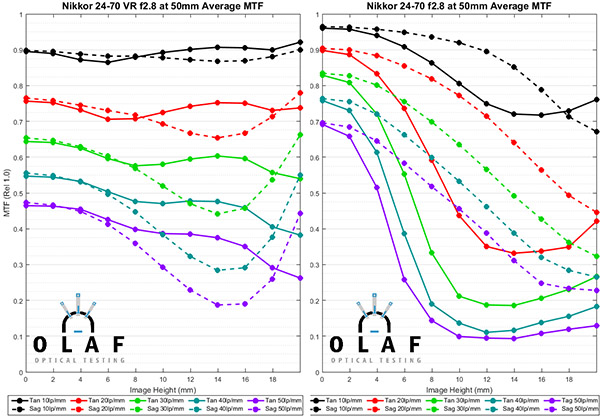 At 24mm what we see is similar to 50mm, although not quite as dramatic. Center resolution is slightly decreased compared to the old version, lateral resolution is improved, and astigmatism is reduced. Actually, the area of greatest astigmatism is also shifted out towards the edge of the image, wherein the old lens it was about 2/3 of the way from center. The new lens is dramatically better at the very edges of the image. 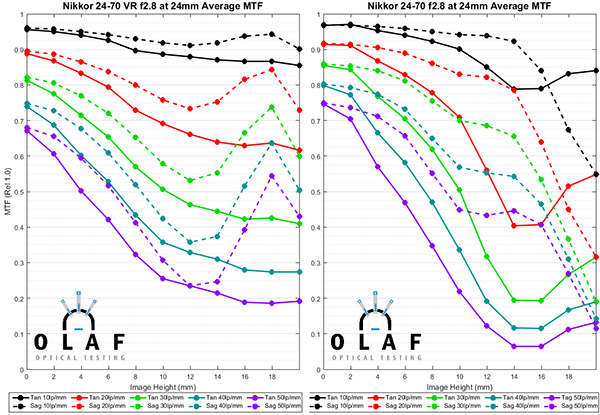 24-70mm zoom lenses tend to be just average lenses as far as consistency. All of them seem to have a fair bit of copy-to-copy variation, which isn’t shocking. These lenses are retrofocus at 24mm, changing to telephoto as you zoom out; they tend to have extending barrels rather than internal zooms, and they are complex optically. All of those ‘features’ means there are a lot of things that can vary from one copy to another. The Nikon 24-70 f/2.8 VR isn’t really any better or worse than the others we’ve tested (Nikon, Canon, and Tamron); it’s similar to the others as far as sample variation.

The logical comparison, of course, is with the Tamron 24-70 f/2.8 Di VC since many Nikon shooters will be choosing between these two lenses and because both have vibration reduction. I’ll add the Canon 24-70 f/2.8 Mk II to the comparison since we’ve called that the MTF gold standard of 24-70 zooms. We’ll compare by focal length like we did above.

At 70mm, where historically all 24-70s have been weakest, the Nikon VR is at its best. While it’s not quite as good as the others in the very center, it’s quite close. Away from center, the Nikon really is awesome, and better than either the Canon or Tamron in the corners and edges.

At 50mm, as mentioned in the Nikon comparison, we see Nikon’s design difference. It’s not quite the center resolution of the other two lenses but is the best out on the edges. At 50mm, it shows more astigmatism in the middle third of the image than the other two, but that’s still very well controlled.

At 24mm, we again see what we saw at 50mm. Center resolution isn’t as good as the others two lenses; it’s been traded for a very flat field that gives the Nikon the best edges of the group.

Well, this will be a bit different, but my conclusion is that for those of you interested in this lens, optical testing probably shouldn’t sway your decision very much. It tells you that if you want the absolute best center resolution at the mid and wider ends of the lens, then you probably don’t want the new Nikon 24-70 f/2.8 VR. And it also tells you that this lens has been designed to be about things other than absolute resolution. It’s about having a flat field with very equal sharpness from side-to-side, and fairly equal sharpness throughout the zoom range.

Whether you love this lens or don’t care that it exists will depend on how you think the pictures look. The MTF charts suggest that it should have nice bokeh, a very smooth image with good sharpness from side-to-side, and may actually give you images that look a little different than those made with the other 24-70 f/2.8 zooms. The MTF charts suggest it, but only actual images are going to show it. The real keys are going to be how you like its size and the way it handles, how much of an advantage the VR makes for your kind of shooting. Those are all things you’re going to see in real-world test reports and reviews and they’re what will make up your mind about whether this is a worthwhile upgrade for you.