The audio from an interview recording truly is the single most important piece of media you capture. Without a clean, quality recording of your interview subject’s testimonial, your story is lost. No amount of b-roll or text on screen will create the same amount of emotion, drama, or interest that a real person can create when speaking from the heart.

As beginner videographers expand their kits to include audio gear, and photographers start to transition over to the dark side (if they only knew the power, of video production), there’s a lot that needs to be learned about the gear and techniques needed to properly capture audio. Interviews and testimonials are often the backbones to many documentary and corporate video projects, so learning about audio recording is vital to a successful production.

There are three ways to capture audio in an interview setting: using an on-camera mic, clipping a lavalier (or lav) mic onto your talent, and by using a shotgun (sometimes called a boom) mic just off-camera. In the article below I’ll explain how each of these mics are different, the proper techniques for using them, and offer some suggestions on makes and models. 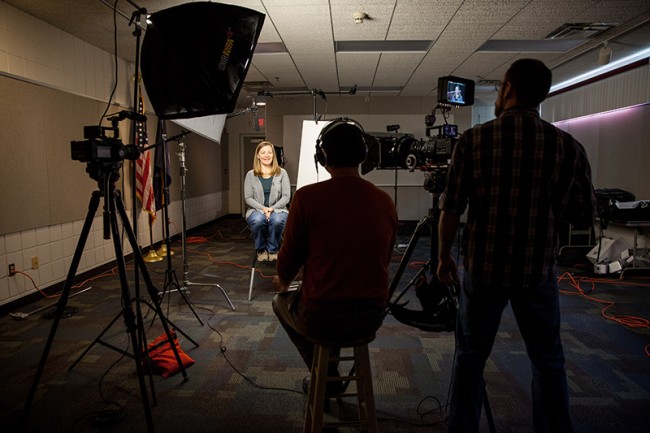 Recording Audio From an On-Camera or Built-in Source

Just about every video camera has some kind of microphone built into it, but I would never rely on it for an interview. At best, they are good for reference audio or providing some background NAT (natural sounds) as it will pick up noise from an entire set, with your interview subject sounding very distant. 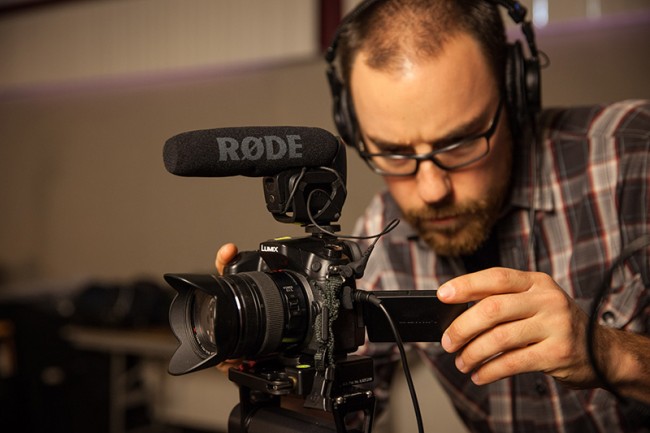 A step up from the built-in mic is using a camera-mounted shotgun, like the Rode VideoMic Pro, which is great for DSLR shooters. For cameras with XLR inputs, shorter shotgun mics like the Rode NTG-2 or Sony MKH-60 would make a good choice. Camera-mounted options are great for run-and-gun operations where you don’t have the time to mic someone or budget to hire a boom operator. However, if you’re doing seated interviews, using a mic that is on your camera is simply not the best choice, because it’s so far away from the source of audio (your subject’s mouth, in this example). Whenever you can, you should try to get your mic as close to the source as possible for the punchiest, cleanest recording.

Lavaliers (or “lav” mics for short) are small mics that get clipped onto your subject’s clothes; usually onto the edge of a jacket or between buttons on a button-up shirt. They are easy to set up, and will capture very usable audio when placed about six to eight inches from the talent’s mouth. This is how I mic 90% of the interviews I shoot. 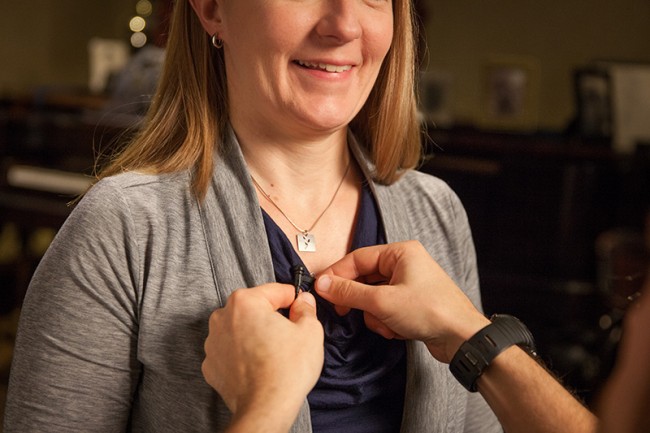 Lav mics might not provide as much tonal range as a similarly priced shotgun mic, but their convenience makes them an industry standard for interview video shoots.

Recording the signal from a lavalier microphone can happen in one of three ways. 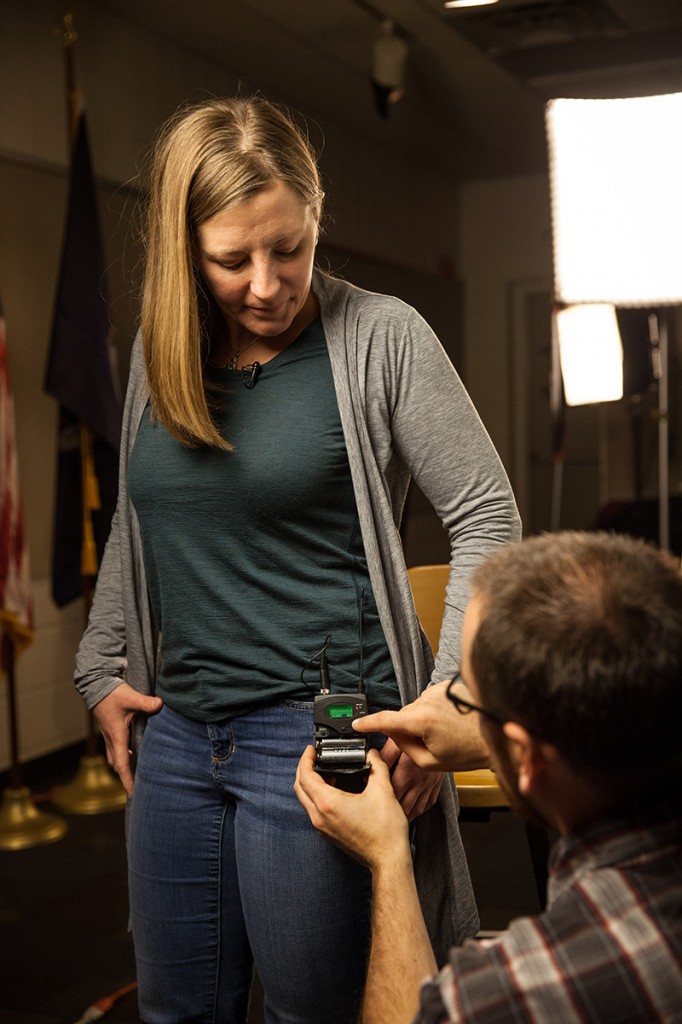 1. Wireless Transmitters and Receivers
Wireless packs are the most common method of capturing the audio from interviews. The lavalier plugs into a belt pack transmitter, which sends a wireless signal to a receiver that plugs into an audio input on either your camera or audio recorder like the Zoom H4n. Wireless packs are great for convenience, but be careful to use only batteries that are at full strength and select frequencies that are clear of noise and signal interruptions. The Sennheiser G3 series are the standard for most crews I’ve worked with, and I myself have owned the older model of these for years.

2. Wired Directly into the Camera
Wired lavs like the Shure SM93 will plug directly into your camera’s XLR port, and can offer a cheaper alternative to using the wireless method described above. If you’re in an area where there is a lot of radio signal traffic, this might be a safe choice to avoid unwanted dropouts. 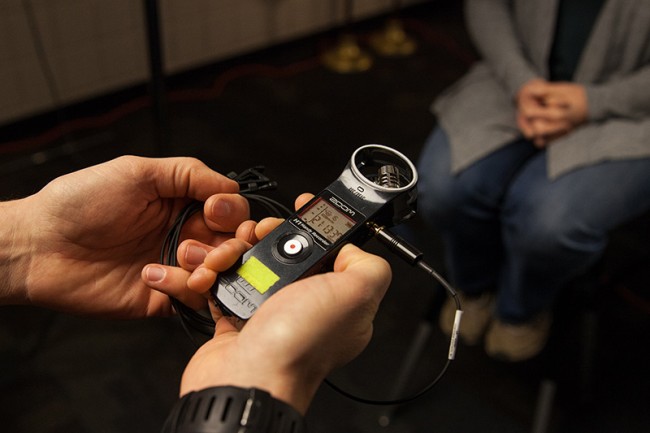 3. Plug into a Stand-Alone Recorder
If you don’t mind syncing up your audio in the edit, using a “second system sound” is an easy, albeit sometimes risky, way to record your audio. I like to use a Zoom H1, as it’s incredibly small and very simple to use. You plug your lav directly into it, set the levels, hit record, and it will follow your subject wherever they go. 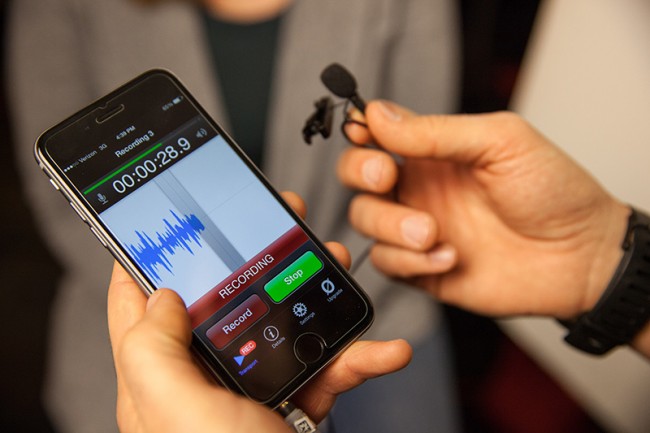 A newer, perhaps cheaper option for some, is to use smartphones. The Rode SmartLav+ is specifically sold for this purpose, as it works (and only works) with a smart phone jack, and can be controlled by an app.

The downside of stand-alone recorders is that you aren’t able to actively monitor the signals during the recording. This means that if the battery dies, the mic clip moves or something else happens to ruin the audio, you might not realize it until you’re back at home editing!

Most wireless kits will come with a basic lavalier microphone. This will get you an OK recording, but upgrading from a kit model to something like a Countryman B6 or a Sennheiser ME-2 will give you a bump in sound quality. 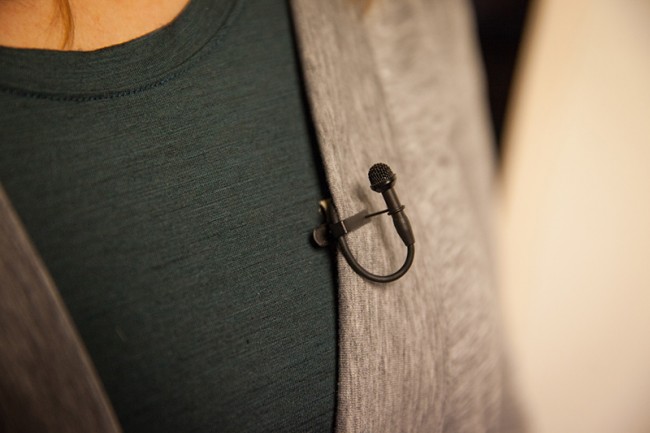 Techniques for Clipping a Lavalier Microphone

In most interview settings, it’s completely acceptable to see the actual microphone itself, but you should try and “dress” the mic to make it look presentable. This often means hiding the cable inside the subject’s shirt, and making a loop in the cable just below the capsule. The loop actually serves two purposes; it makes the mic placement look neat, and it also creates a small amount of slack in the cable, which will help eliminate contact noise if the mic cable is accidentally pulled or rubbed.

Making the loop is simple to understand, but can be tricky to master, especially when you are in someone’s personal space. First, let your subject know if they need to run the mic up their shirt or not, and be professional about it. Hand them the mic, and ask them to pull out about three to four inches from the top of their shirt or between a pair of buttons. Once they have, take the capsule and use your clip to affix it to an appropriate place, about six to eight inches from their mouth.

Open the clip back up, and run the cable back through it in a “U” shape. On the backside of the clip, create a much smaller, upside-down “U” by catching the returning cable into the end of the clip. Use some double-sided spike tape as needed to keep it seated and in place. It can help to practice on a friend, so don’t be discouraged if you don’t get it right the first time. Try to keep the mic pointed in the direction of the talent’s mouth, and keep it clear from rubbing on their clothes or hair.

Shotgun mics, or “boom” mics, as they are called when mounted onto the end of a boom pole, are rod-shaped microphones that are great for capturing interview audio. Shotgun mics are directional, meaning they capture more sound from what they point at, and less from the sides. This is a very general explanation of this style of microphone, as not every shotgun mic is created equal. They can have different pickup patterns from one mic to the next, which is worth looking into before selecting the proper mic. 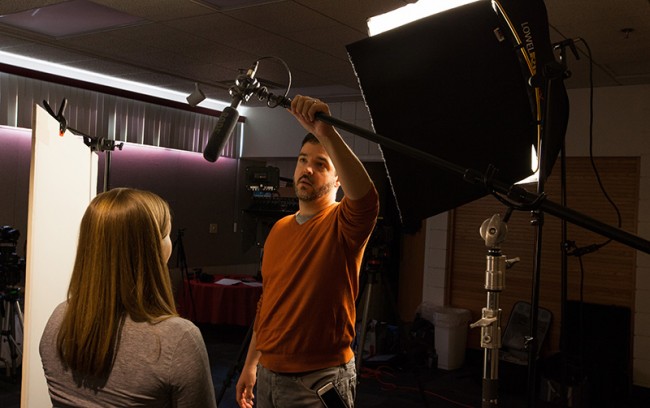 For controlled interviews, a cardioid or super/hyper cardioid style of a microphone is typically used. The Rode NTG2, Rode NTG4+, Sennheiser MKH-416 and Sennheiser MKE 60, are all solid choices for a quality shotgun mic for interviews. 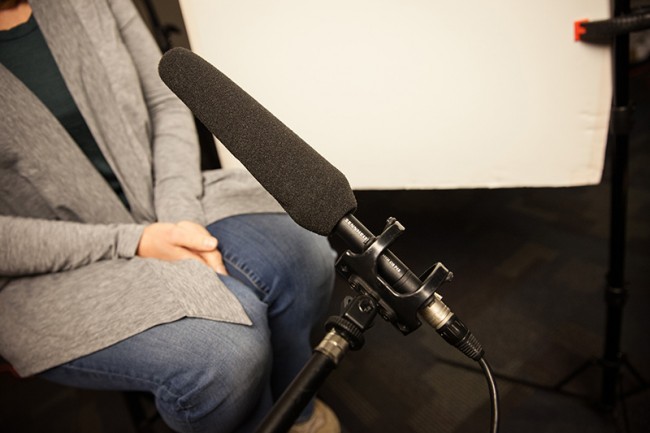 No matter if your interview is a seated one, or captured handheld while on the street, the most important thing to do is to get the mic as close as possible, without it entering your frame. The closer the mic is, the stronger the speaker’s signal will be, which means you’ll get significantly less background noise.

I prefer using a C-stand with an Auray pole holder to sit my K-Tek boom pole in, and positioning it just outside of the upper part of my frame, with the mic pointed directly at the space in front of my subject’s mouth. This will get a great sound, and can be a bit less intrusive to the subject than having to clip a mic onto their clothes. 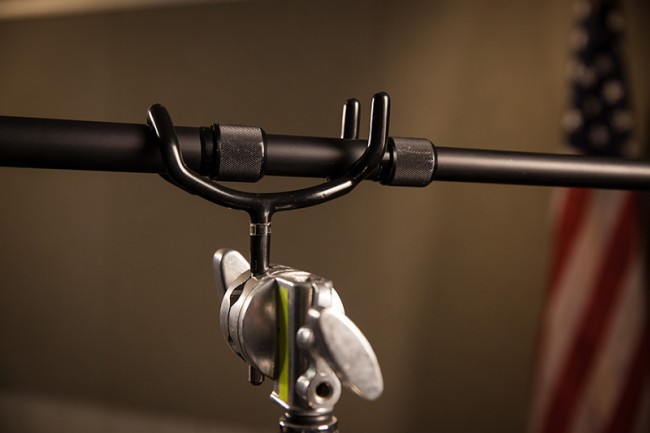 A Few More Things to Know

Use both shotgun and lavs for your interviews! Best case is you can pick (in the edit) whichever mic sounds better, or if you get signal loss/interference on one mic, you can pick the other without having lost the clip. Building in redundancy is smart if you have an important interview.

If you’re working outside, get “dead cats” for your mics to help eliminate wind noise. They work wonders, and you can get them for both lavs and shotguns.

Pickup patterns are different for each mic, but generally come in one of four patterns: omni, cardioid, hyper cardioid, and shotgun. Don’t get confused by the “shotgun” pickup pattern, as not all shotgun mics have the shotgun pattern.

Also, make sure you invest in a decent set of headphones. In a pinch, you can use earbuds, but a quality pair of studio-grade headphones are well worth the price to monitor your audio, which after all, is the most important piece of your interview shoot.

Tweet
Posted in Equipment
Leica SL: A Hate/Love Story
The Biggest Product Announcements at CES and Their Availability for Rental