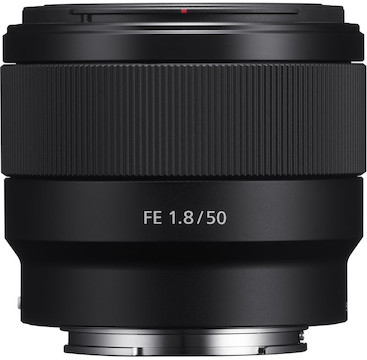 Sony has cranked out a bunch of new lenses lately, and one of their latest got my attention: the FE 50mm f/1.8.  It did so for a couple of reasons. First, I wasn’t expecting it, since they already have the really good FE 55mm f/1.8 ZA lens in their lineup. Second, I’ll admit I expected them to suffer from the inevitable comparisons with Canon’s ‘nifty fifty’ the 50mm f/1.8 STM lens.

The Canon lens is small, inexpensive, quite sharp, and has some of the lowest copy-to-copy variation we’ve ever tested. Copy-to-copy variation has been a weakness in the FE lineup. While Sony was clearly making progress with that I wasn’t sure they were ready to take on the reigning variance champion. The sony lens is a little larger and more expensive, but then again, if you shoot Sony FE you’re kind of used to ‘a bit more expensive’ lenses and at $250 this is a really affordable lens.

As always, I remind you that this isn’t a review of the lens, simply a lab test of multiple copies on our optical bench to assess MTF and variation.

Well, we’ll go with the logical comparison first, the Canon 50mm f/1.8 vs the Sony 50mm f/1.8. The Sony actually does better at the lower frequencies, indicating it’s probably a more ‘contrasty’ lens, while the Canon is better at higher frequencies, so it may have superior fine detail resolution. Both are really quite good, though, and I should really use ‘different’ rather than ‘better or worse’ to compare them. 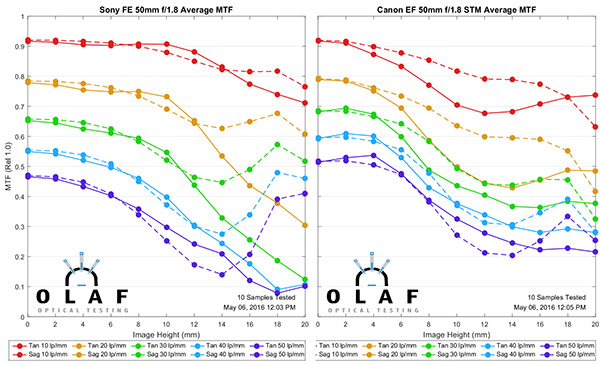 Of course, a lot of Sony shooters want to see the FE 50mm vs 55mm comparison. There’s quite a price difference and while there’s a lot more to a lens than MTF curves, people probably want to see what the MTF differences are. 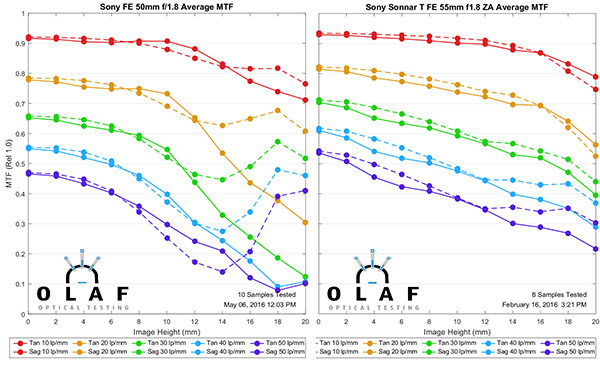 The 50mm is a very good lens and quite a bargain at the price. But there are reasons the 55mm costs more. It’s clearly better across the field than either of the ‘nifty-fifty’ lenses. But the usual rule of ‘increasing resolution is increasingly expensive’ does apply. You get a better lens, but you pay a lot more.

This is the portion of the test where I just expected Sony to not compare very well. But guess what? The copy-to-copy variation on the FE 50mm f/1.8 is superbly low. Remember, the Canon 50mm f/1.8 STM is the standard against which all other lenses are measured. It’s amazingly consistent. The Sony is very close to that. In some ways (center sharpness variation) it’s actually a bit better. So hat’s off to Sony, they’ve made an FE lens that from a copy-to-copy variation standpoint is as good as anything on the market. 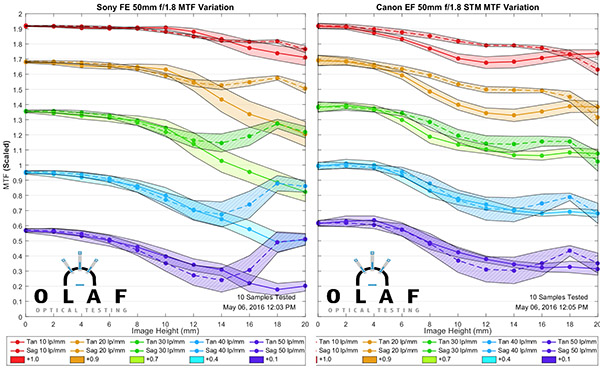 Let’s show you how good by comparing the variation of the new 50mm with the 55mm, which has a lot of sample variation. (I’ll go ahead and add, because desperate fanboys continue to ask, the variation for 55mm lenses is the same now as it was then.) 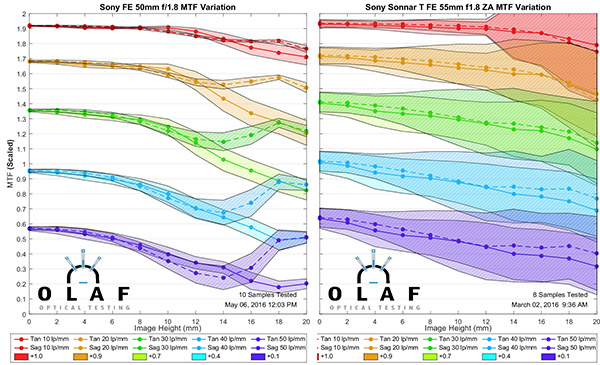 To summarize, then, if you buy a 50mm f/1.8, chances are it’s going to be just about like every other 50mm f/1.8. Sure, there will be a few bad copies, there always are. But they’re very consistent.

We’ll probably tear one of these down soon and take a look inside to see if we can determine just why sample variation is so low. The Sony is a ‘unit focus’ lens with no separate focusing element, if I read their release information correctly, which may have something to do with the lower sample variation.