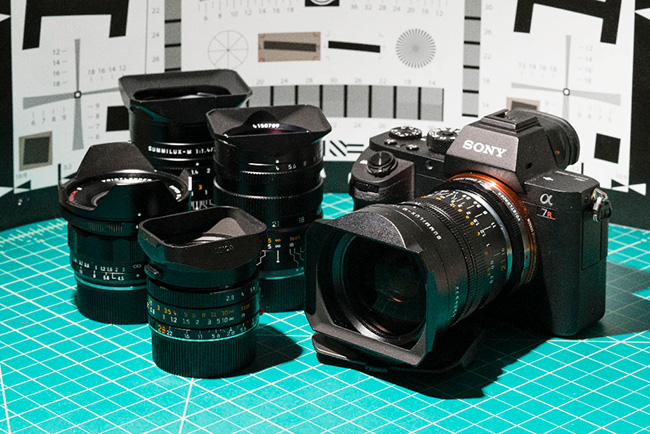 It’s been known for some time that wide angle M mount lenses have issues on Sony mirrorless cameras because of the way the sensors are designed, but there’s never been a very good list of what lenses work best, much less a visual reference to see how bad things can really be. So I took it upon myself to fix that. This isn’t a comprehensive list, but it’s at least all the M mount lenses we stock that are shorter than 35mm. This includes Leica, Voigtländer, and Zeiss lenses in our inventory. Below you’ll find images I took with a Leica Typ 240 body and a Sony a7R II body with Voigtländer M mount to E mount adapter. To keep things compact, I’ve cut the corners and centers out of test chart images to show the impact on corner sharpness and/or color shift that the Sony sensor has, compared to how the lens is meant to perform on Leica bodies. In each sample, you’ll see the Leica image on the left and Sony on the right, with wide open performance on top and stopped down to f/8 on the bottom. Because of the higher resolution on the Sony a7R II (7952×5304), I resized the original images to match the M Typ 240 (5952×3968) before cropping for convenience in showing side by side images. The effects of the sensor stack are still plainly visible even at the slightly reduced resolution.

To draw some quick conclusions from the above images, every lens we stock is affected to some degree, but there are at least a few I would consider still very usable wide open. The Voigtländer 15mm f/4.5 Heliar III, Leica 16-18-21mm f/4 Tri-Elmar, Leica 21mm f/1.4 Summilux-M ASPH, Leica 28mm f/1.4 Summilux-M ASPH, and Leica 28mm f/2.8 ASPH Elmarit-M II are all what I would consider good enough at maximum aperture, with the Tri-Elmar being the absolute best of the bunch, and the Summiluxes very close behind. Almost all of the tested lenses improve corner performance when stopped down to about f/8, where a lot of these lenses really shine for landscape work anyways. One curious thing to note, though, is that often when stopping down, you can improve corner performance by adjusting your focus so that the center isn’t at its sharpest, but still within the depth of field. Check out this example from the Zeiss 15mm f/2.8 at f/8: 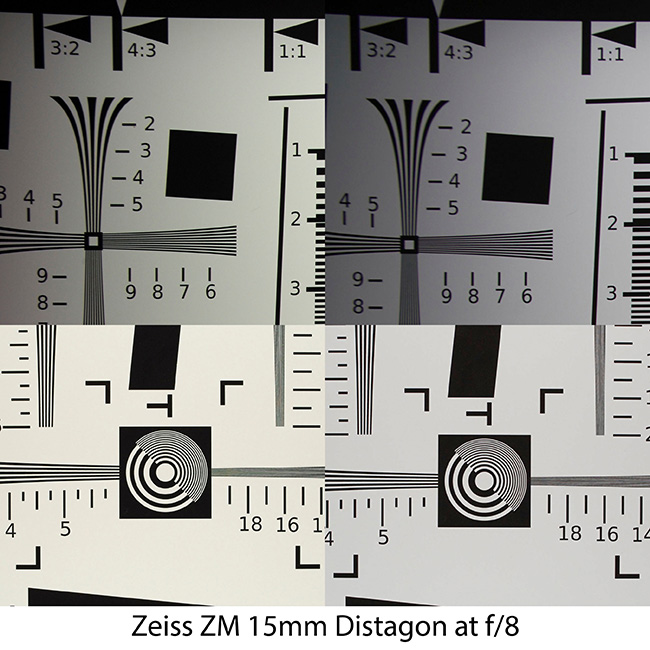 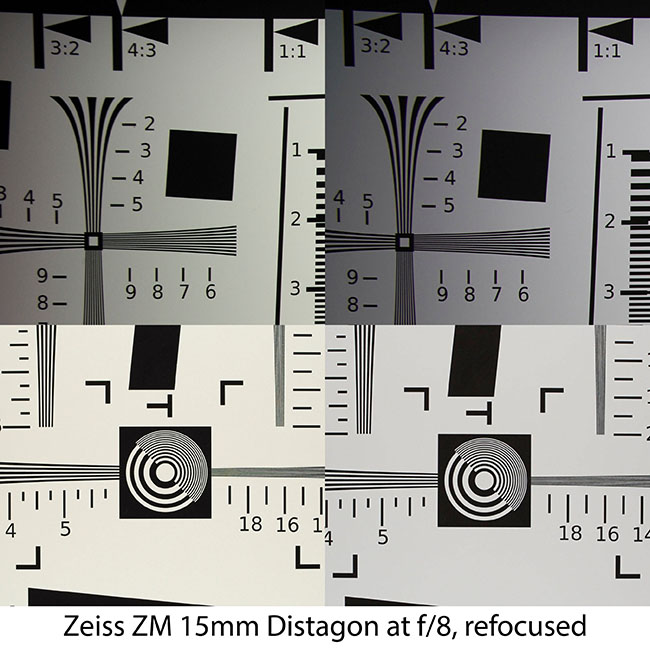 On the left is the corner and center when I focused on the center, and on the right is the corner and center when I focused on the corner. There’s negligible difference in the center, but a world of difference in the corners. This is at chart distances of only three or four feet, so at infinity, the results may not be as positive. That’s something to keep in mind for all of these lenses. At or near infinity corner performance on Sony bodies will diminish some as the rear elements of these lenses get closer to the sensor. The Tri-Elmar and 21 and 28 Summilux are still top performers, even at infinity, though, and they’re my regular go-to lenses for wide work on Sony bodies.

So is it worth it to even try adapting these lenses? Well, with the still limited lens options available for Sony a7 bodies these days, I would say…maybe. New E-mount options seem to be coming out all the time, like the Voigtländer 10mm f/5.6 Hyper-Wide Heliar and 15mm f/4.5 Super-Wide Heliar, as well as the Zeiss Batis 18mm f/2.8 and 25mm f/2. These are great options, and much more reasonably priced compared to offerings from Leica. If you already have an M mount system and are looking to try Sony, this list I’ve made is meant for you. If you’re a Sony owner looking to find some good wide angle alternatives, now you have a visual reference for your best options. And let’s be honest, nothing looks as good as that 21mm Summilux, and for $7400, nothing else really should.