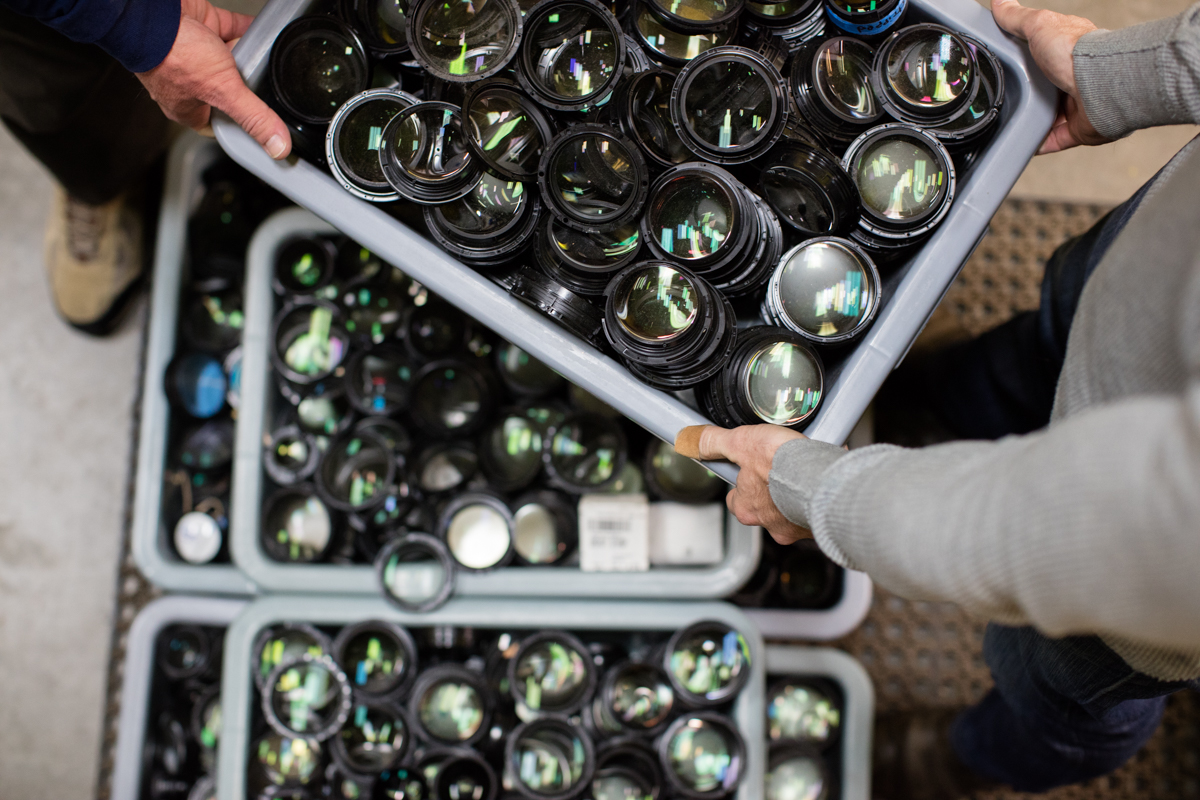 The internet is an interesting resource. Once you’ve put a reference up, it’s there forever. Over time, things may change, but that 10-year-old article doesn’t. A few weeks ago someone used some old articles I’d written (1, 2, 3) as a reason why he doesn’t use protective UV filters. They claimed I had said there was no need to use UV filters.

That’s kind of what I said, but so compressed as to be inaccurate. What I really said was this:

But at that time (2010 to 2013) I wrote those posts, that meant I didn’t use UV filters very often because it usually wasn’t worth the money. Front element replacements weren’t that expensive, and high-quality UV filters were expensive.

A Bit About My Qualifications

As with every article I write, there will be three or four comments saying, “I’ve had 20 different lenses and never had this problem.” Good for you. I take care of around 20,000 lenses at any given time. About 15,000 of those never had a problem either. You do the math. So I write about the problems that occur so you can be forewarned about the problems that may occur with your lenses. Forewarned is forearmed.

We replace front elements in lenses for cosmetic reasons every day. Every. Damn. Day. Sure, they’re rental lenses and maybe don’t get babied as much as your lenses do. You may get lucky and never deal with any of this. But it’s always good to make an informed decision about what precautions you want to take. In this particular case, basing your decisions on 6 or 8 year old data can be a mistake. 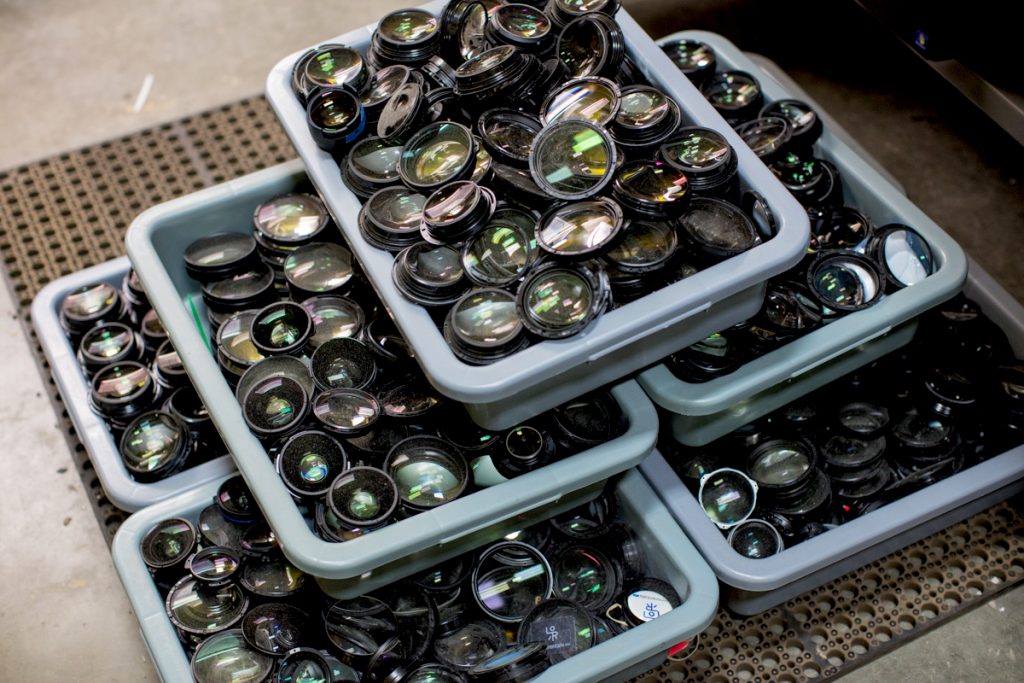 There Has Been a Big Change

I’ve always said to evaluate the cost-benefit ratio of whether you want to use a protective filter. Now the price has changed so that change should be factored into the equation. (BTW – the costs I’m giving as examples below are our costs. Your prices may be different. But we’re a really large repair customer based in the U. S. so by ‘different’ I mean ‘yours will probably be a bit more expensive.’)

My point here is not to provide a list of what every manufacturer charges for every front element. You can call or email them if you want to know. It’s not that one manufacturer has really high prices and another doesn’t. They all have some high and low-cost lenses. For example, manufacturer X has front element replacement costs that range from 9% of the lens price to 33%. If there’s a general rule it’s that lenses released 5 or more years ago are reasonable cost for front element replacement, newly released lenses are expensive. There are exceptions, of course. And so I’m clear, it’s not that the cost goes down over time. Unlike sale prices, repair prices don’t go down after the lens has been out a while.

So, front element replacement costs, particularly on new lenses, are higher than they used to be and some lenses are breathtakingly higher. There are some real reasons this is so. These new, sharper lenses often have front elements that are unique glass types, nano-coated, highly aspherical and a lot of other things. Manufacturers are pulling ever trick out of their bag to make lenses sharper and better. One of those tricks is that front elements, which often used to be simple, protective elements, got fancy. ‘Fancy’ is the optical word for damned expensive.

Some of the increased expense is just poor planning. Let’s pretend, for example; the manufacturer thought, “Well, this front group is so difficult to adjust optically that the service center can’t do it. So instead of making the front element a part, let’s just make the entire front group of lens elements a part so that we can adjust it in the factory, and the service center can just replace the whole group.” I have talked to manufacturer’s lens designers who had absolutely no idea the front element was more likely to need replacing than other parts (we replace more front elements than all other parts combined). That’s not what they do; they design lenses.

Does This Really Matter?

But if you plan on selling your lens at some point, it does affect resale value significantly. We make this decision every day: The lens has a small scratch on the front group, is it worth the price of replacing it? A few years ago we’d spend $100 on a new front element and get $150 more in asking price for the used lens. These days the math is different. It’s not worth spending $250 on a new front group to get a $150 higher selling price.

Of course, there’s a positive for people who buy used lenses. A small front element scratch means a bargain lens for sale that will function just fine.

So does this mean you should put a UV filter on all of your lenses? No. I still recommend looking at the cost-to-benefit ratio for the specific lens, and considering what you’re going do with it. If it’s a lens for studio portraiture only, why bother? If you shooting surf at the beach, then you better wear protection.

In most cases, a lens hood (actually mounted on the lens, not left in your bag) provides plenty of front element protection. Wide-angle lenses are a unique case, though, since those hoods don’t provide much protection. But if you are outdoors and your lens is exposed to dust, sand, water, or other things lenses don’t like, then a hood doesn’t provide protection and UV filter is probably worthwhile.

How Much Does A Filter Impact Image

Well, if you buy a $30 filter, then it can impact the image a lot. Waviness in the thickness of glass, poor coatings, poor quality glass, even shiny metal in the mounting ring can cause problems. If you choose to buy a cheap filter, you’ll probably see effects if you look critically; although it won’t be in every shot. You may see some effect on absolute sharpness, but you’re far more likely to see effects from light flare, ugly bokeh, ghosting, and reflections.

A high-quality filter is made from good optical glass, flat to within 1/4 wavelength, and multicoated on BOTH SIDES. It’s expensive, but it doesn’t have much effect on image quality at all. (When you do your filter shopping, make sure the filter is coated on both sides; some cheap filter makers multicoat one side only, then advertise it as multicoated). A good filter should avoid most (not all, but almost all) effects regarding ghosting, flare, and reflection. It shouldn’t affect sharpness even at the highest level of measurement.

Here’s an example of a Canon 50mm f/1.2 lens tested on our optical bench to demonstrate there’s no sharpness penalty with an excellent filter. First the lens with no filter at all. 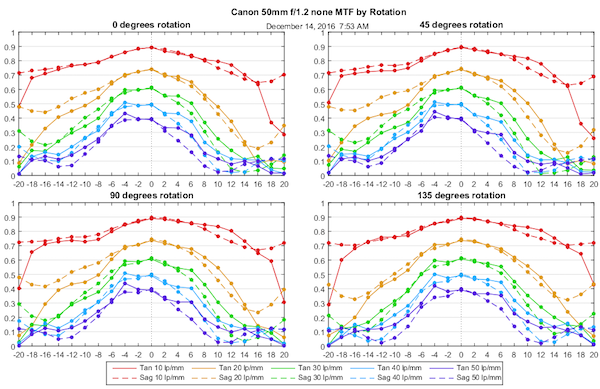 And then tested with a high-quality UV filter in place. 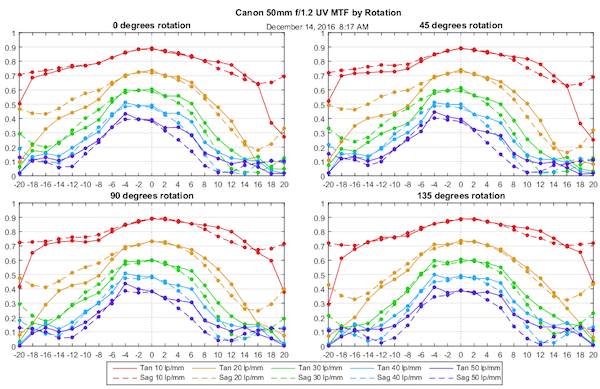 There are no effects on MTF from the filter, either on or off axis. This doesn’t mean there might not be a bit of ghosting if you’re shooting street lights at night or star trails, etc. But it won’t be often, and you can always remove the filter if you notice that happening in a particular shot.

So Do I Recommend Filters Now?

Not necessarily, no. I support common sense and looking at the cost-to-benefit ratio. But if you have one of the newer lenses, especially if you know the front element has Nano-coating, is aspherical, or is just expensive to replace, then I’d certainly at least have a filter available. I’d especially recommend it if you expect you might sell that lens someday; even a minor scratch is probably a 10% price reduction on the retail market. If you say they’ll pry that lens out of your cold, dead fingers, then I wouldn’t worry so much.

I also really recommend you look carefully at the filter threads and front element BEFORE you mount a filter on the lens, especially if it’s an ‘ultra-thin’ filter. Several lenses we know of have slightly projecting front elements, and some ultra-thin filters can actually touch the center of the front element causing a scratch if the filter is tightened all the way down.

While I’m on the subject of touching the front element, though, those nice new thick lens caps a lot of manufacturers use these days, the ones with the big spring-loaded squeeze release handles, are a problem for some lenses, especially when they are 82mm wide. There’s a lot of plastic underneath that cap, right over the center of the lens. If the lens cap gets pushed down in the middle, it can scrape the front element. I know: glass is harder than plastic. But coatings aren’t. And a coating scratch is just as visible as a glass scratch.