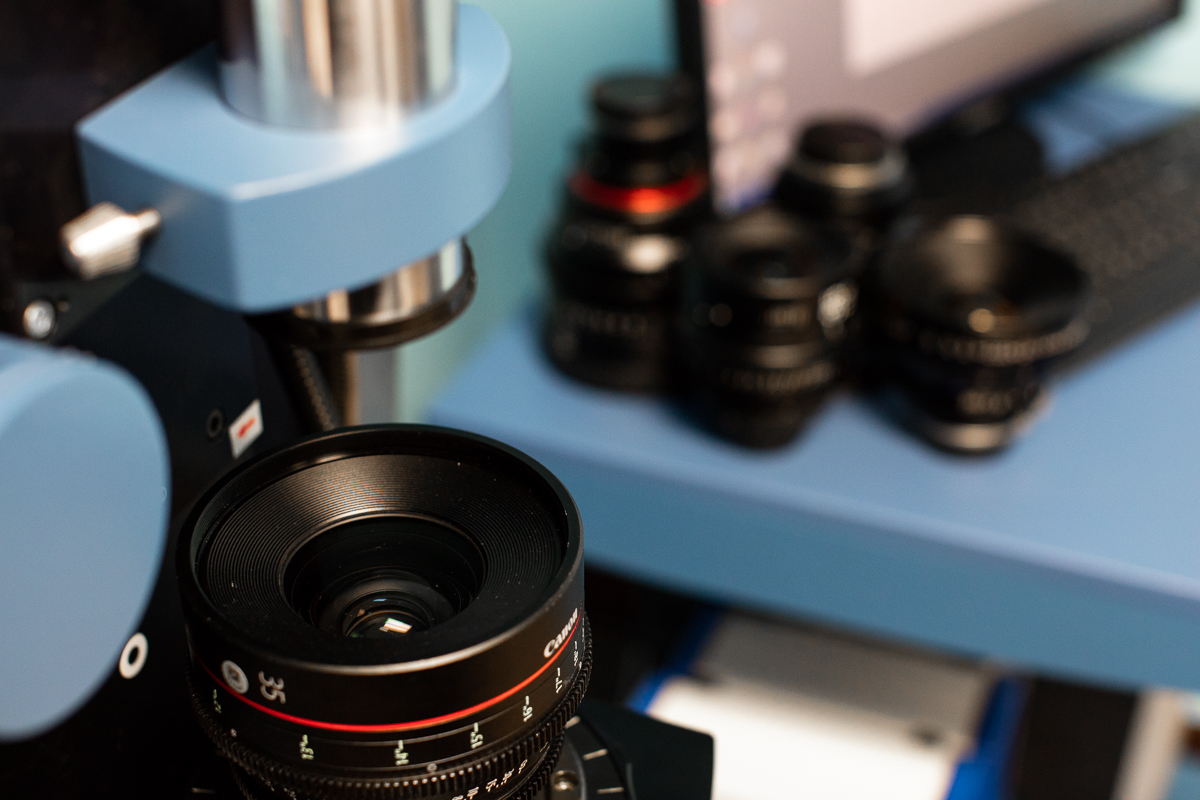 You have been patient, my friends. You have made it through the first article, where we looked at how MTFs improve stopped down and saw it was a bit different for every lens. You enjoyed the second article, where we looked at the Best Individual Focus MTF (BIF MTF) which showed how good the MTF could be at different points from center to edge if you focus at that point.

By the end of this third article, you will be able to use terms like “the BIF-BAF point”, “the VLOR”, and the modestly named Roger’s Point to both amaze and intimidate your online forum of choice for months to come. It’s like an early Christmas.

In more concrete terms, we’re going to work with all that data we get with the MTF versus Field versus Focus test to show you something that may also be useful for certain types of imaging; the times when you want as much of the image in focus as possible. That might be a landscape, a group photograph, architectural shooting, or anytime you just want the best overall sharpness possible, and don’t want to shoot stopped-down very far.

Let’s go back to the MTF v Field v Focus curve I used in the last article, the Zeiss CP.2 50mm Super Speed lens at T5.6. 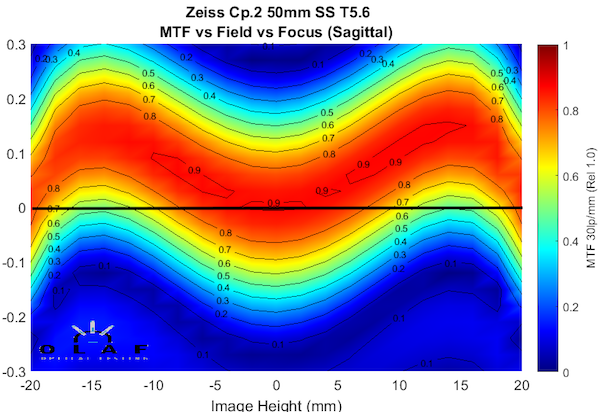 In that article, I pointed out that the normal MTF, which is measured along the black line across the center of the image didn’t show how sharp the lens could be at each position, if we refocused the machine to the sharpest position for each point. That’s the difference between the standard MTF (left, below) and the Best Individual Focus MTF (BIF MTF; below right.) 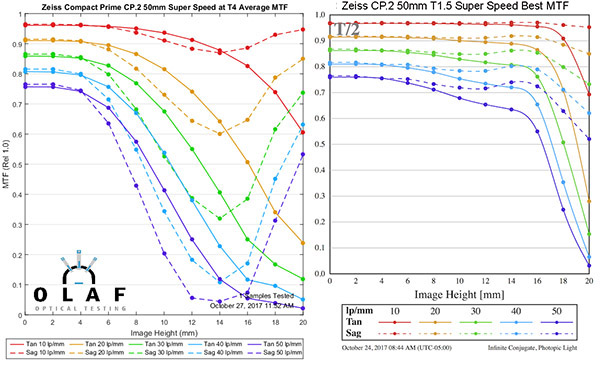 When we take the measurements for the BIF MTF, we also get the exact focus position used to get the sharpest MTF at each point. We can plot that out, too. 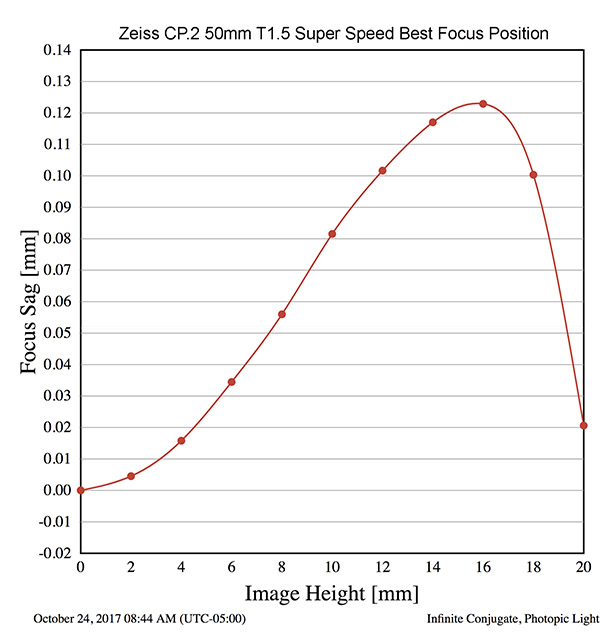 If you scroll back up to the MTF v Field v Focus graph, you can see the best focus position is similar to the curve of one side of the lens (the red area is the area of maximum sharpness). We can run a few more calculations and determine the focusing distance gives the best mean MTF from one side of the field to the other, which we do in the graph below. 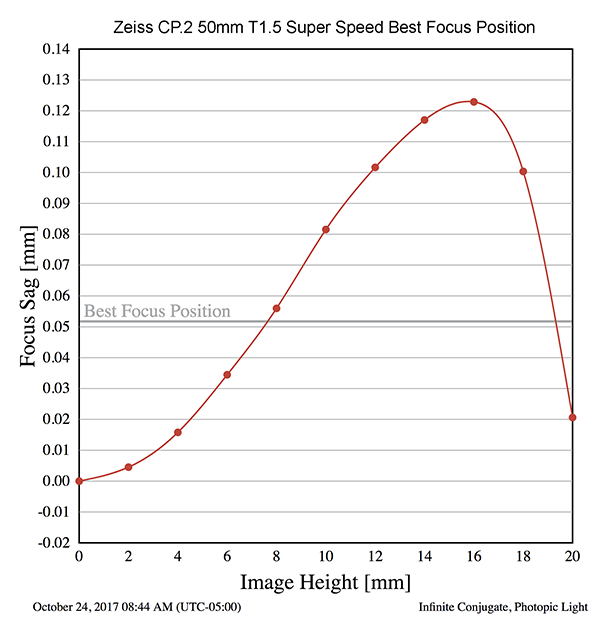 To give a more intuitive picture, I’ll draw a second bar across the Field graph from above in green, at +0.052mm. 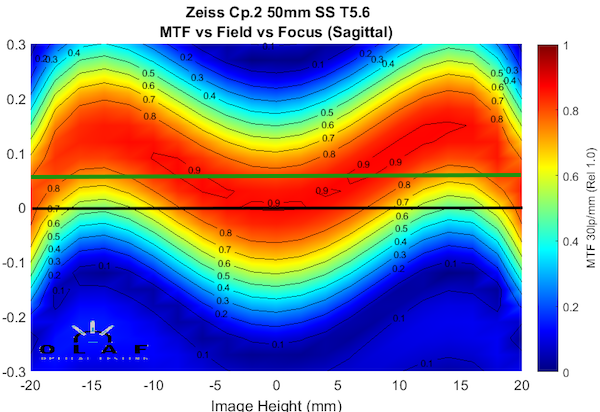 As you can see, the image will be a bit softer in the center, but reasonably sharp from side-to-side. This Best Average Focus distance is different for every lens but is easily measurable.

Of course, if you’re thinking ahead, you’re probably saying, “Well, that’s cool sciencey stuff, but how the hell am I supposed to set my camera to focus the equivalent of 0.05mm in front of center focus?” It’s easy; we go back to that ‘best focus’ chart and find the point where ‘Best Individual Focus Distance’ (red curve) crosses the “Best Average Focus Position” (gray line). This, of course, is the soon-to-be-famous BIF-BAF point. 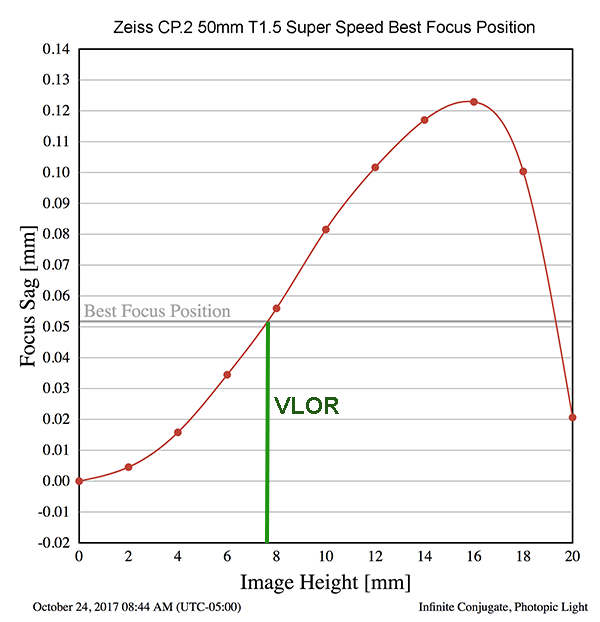 The VLOR points to a position some distance between the center and the side edge of the image (we can call this, oh, I don’t know, Roger’s Point). If you focus your camera at this point, you will be focusing at the Best Average Focus Position, for edge-to-edge sharpness.

A full-frame camera is 17.5mm from center to side. In the case of the lens above, focusing your camera just over 1/3 of the way to either edge (+/- 7.5 mm from the center) will work. You can do it by choosing an AF point in that area or manually in live view. Obviously, you’ll estimate a bit; you might pick 7mm or 8mm but that will be pretty close.

The distance from center for Best Average Focus will vary for each lens. It may also vary a little bit in some lenses depending on aperture (because field curvature can change slightly with aperture) but that difference is probably too small to matter for this technique.

Yep. Obviously, it isn’t magic. We’re trading a little bit of center sharpness to get a larger part of the side-to-side image reasonably sharp. Let’s see how it works.

We took a Zeiss CP.2 50mm SS off the shelf and ran its standard MTF, side to side. It’s really sharp for +/- 6mm from the center(about the middle 1/3), then it falls off pretty steeply. 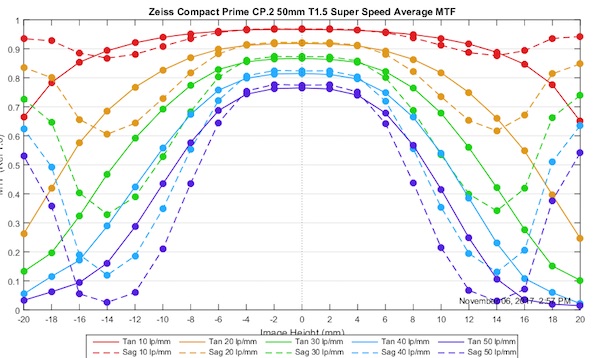 Then we focused 0.05mm further than the best center point focus and ran the MTF again. 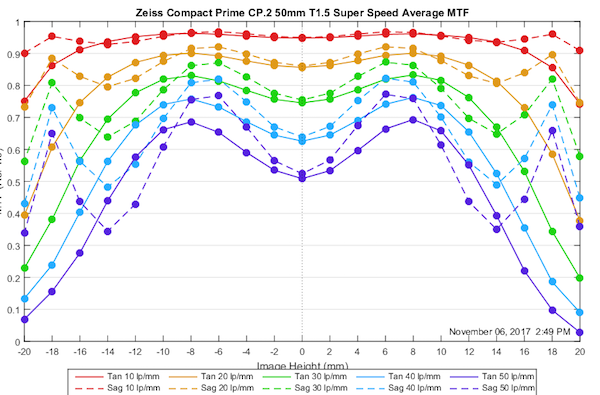 You can see now that the best MTF is at about +/- 6 to 8mm from the center, just as predicted. The center isn’t quite as sharp, particularly at the higher frequencies (fine detail) but an MTF of 0.5 at 50 lp/mm is still good. Out at 10 to 14mm away from the center, the image is now usably sharp (high-frequency MTF > 0.3).  With center focus, this area had almost lost the high-frequency MTF. With Best Average Focus, the center 2/3 of our image is now reasonably sharp, where with center focus only about 1/3 of the image was.

If you want to look at it another way, here are the Full Frame MTF Displays at 40 lp/mm, which is a pretty high resolution. Red we consider unacceptably soft, yellow is borderline. 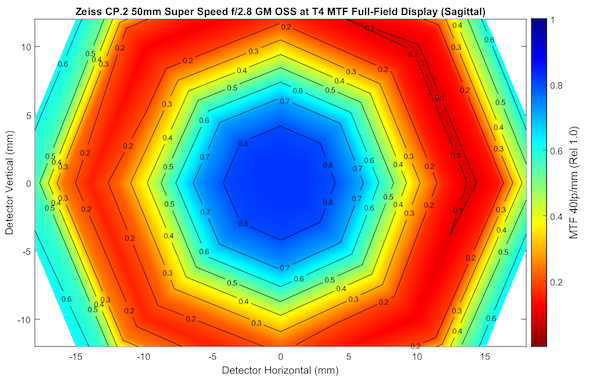 The FFD shows it nicely. We’ve sacrificed the center sharpness from excellent to good, but now have the entire image in the acceptable category. This was at T4; things would be a bit better at T5.6. 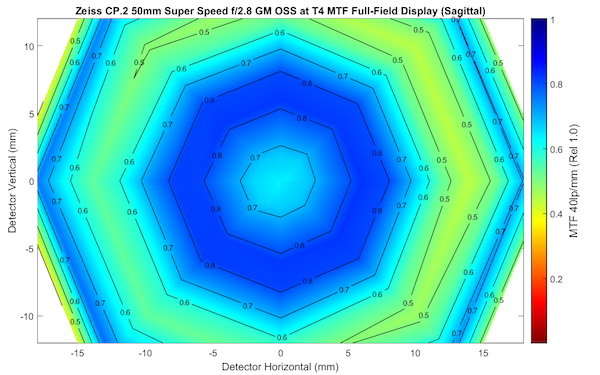 Again, it’s not a tool you’d want to use for all photography. But when the goal is to get as much side-to-side sharpness as possible, it’s a nice trick to have. It could be useful for landscapes, group photos, architectural shots, and some types of street shooting at any rate.

I tried the same test on the Sigma Cine 85mm T1.5. I wasn’t sure that this would make a difference since this lens stays pretty sharp so far from center. I was also interested in this lens because the Roger’s Point was way out at 11mm from center, more than half-way to the edge, which is fairly extreme. Because this lens is so good at T4, I dropped the aperture down to T2.8, so we had a narrower depth of field.

The difference is more subtle, but it’s there. Follow the 0.9, 0.8, and 0.7 MTF lines out, and you’ll lens has a higher MTF at each frequency away from the center. Here is the standard MTF on top, and the Best Average Focus MTF (BAF-MTF) below. 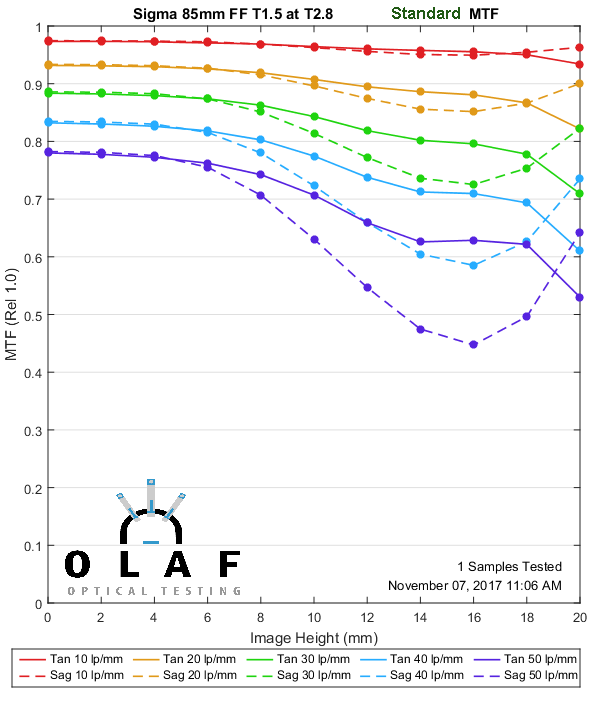 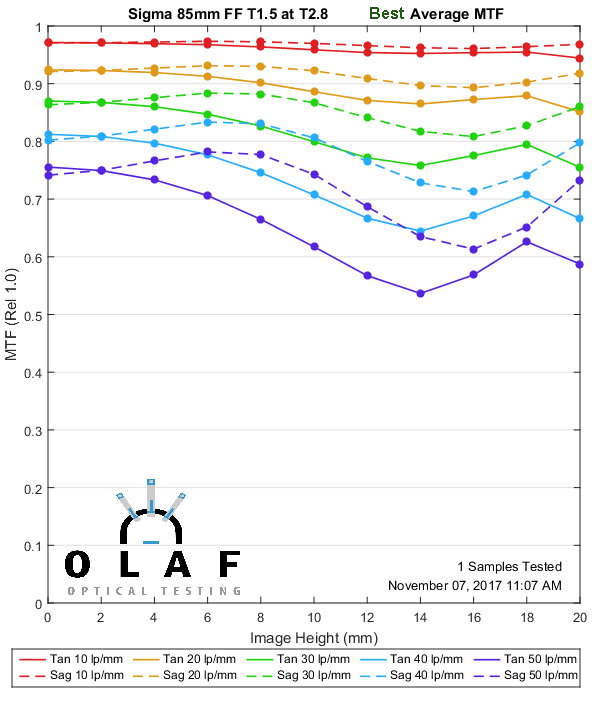 It’s more apparent if I use the Full Frame Display MTF. I’m doing this one at a higher frequency, 50 lp/mm, because the Sigma 85mm T1.5 can handle that, which many lenses can’t. Again, center focus MTF is on top, BAF MTF on the bottom. 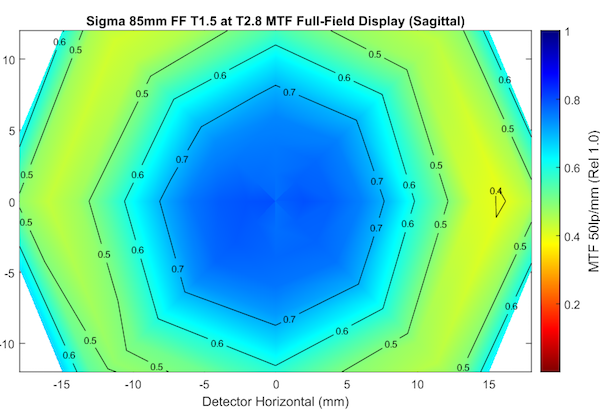 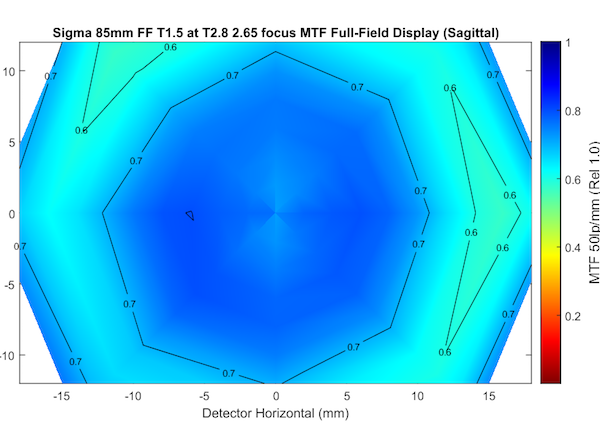 I’m not going to (at least right now) show you the MTF curves for every single Cine lens we’ve tested. I’m just going to put up a table of the focus position that will give you the Best Average MTF. One of the questions I have is, do people really want the BAF MTF curves? I think the field curvature graph and BAF Position would be sufficient.

If people really want to see it, we could either just show the BAF Position and the VLOR graph (scroll way back up). And I guess we could show give the BAF MTF curve for each lens. Personally, I think the FFD MTF graphs (the colored circle showing the image field) are best for that purpose.

Until our software upgrades are finished, none of this is automated, though. So, for now, I’m just going to give you the BAF Positions for the Cinema Primes we’ve tested. (They are the same for the photo lens version of each lens.) Since a full frame sensor is 17.5 mm from center to side, it should be fairly easy to estimate where to focus to obtain BAF. You don’t need to count mm, we ran these a bit to either side, and there was no detectable change, so ‘just short of halfway to the edge’ or ‘about 1/4 of the way to the edge’ is accurate enough.

I’ve made the table sortable so you can look for a pattern, but I don’t see one myself.

I have no idea. I can see it being a sometimes useful tool. If I did a lot of weddings or group photos, I’d keep the BAF in the back of my mind. It’s kind of counterintuitive to focus on the 3rd lady from center, but it might keep everyone in even focus in the group photo. For landscape photographers it might help when just stopping down isn’t getting everything as sharp as you want. Or perhaps to let you get the shot at f/8 instead of f/16.

Whether that means there’s enough demand for us to publish either the BAF number or the focus curve graph when we do reviews, I don’t know. A lot of times you could probably eyeball it by looking at the MTF v Field v Focus graphs. So I’ll wait for your input on making that decision.

But I think it’s an excellent example of lenses are tools, and the more you know about the tool you’re using, the better you’ll be able to use it. Knowing how far from center the BIF-MTF stays sharp, and where the BAF MTF point is are useful things, no matter how geeky the technique we use to find them is.