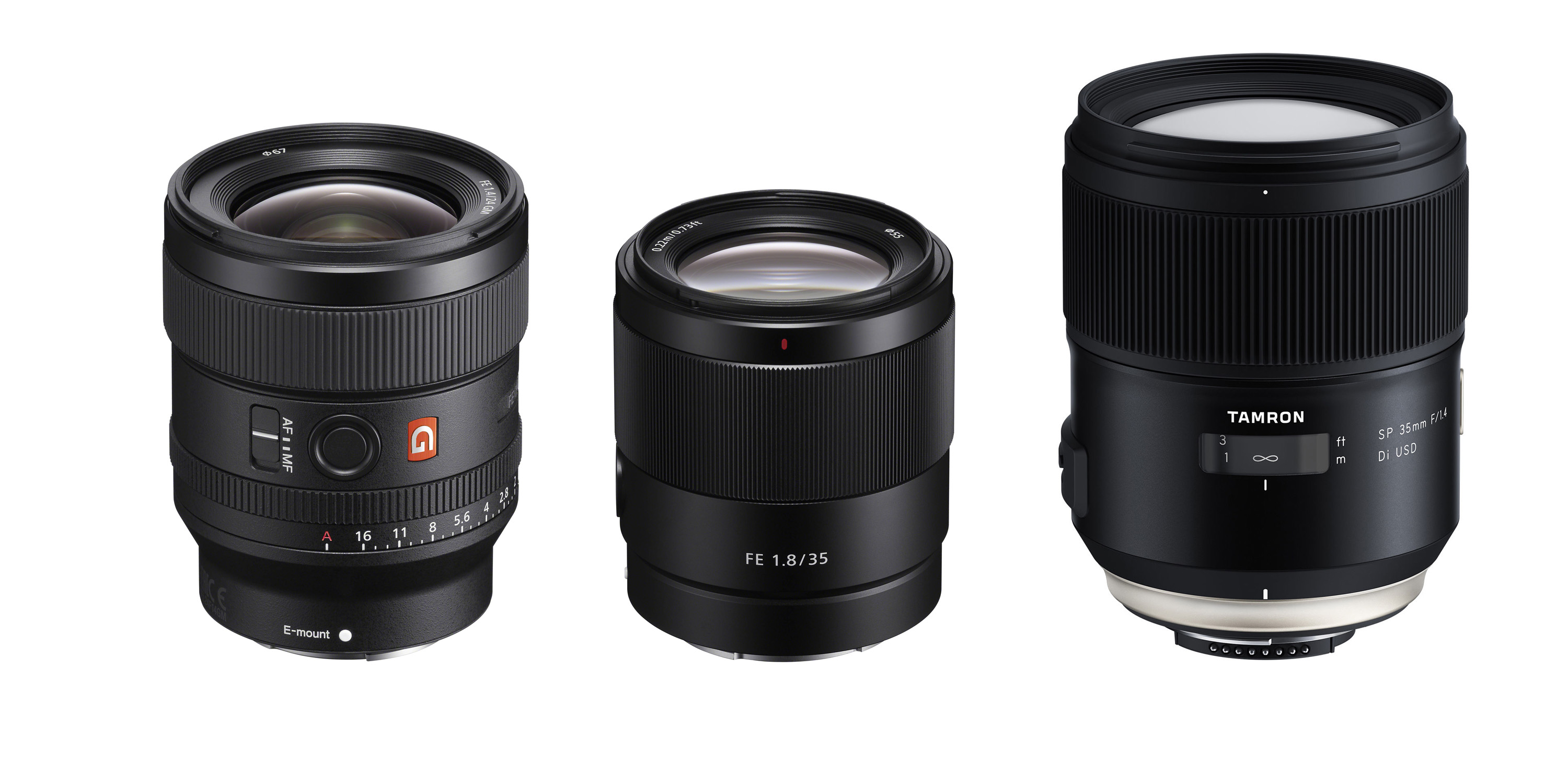 Most of you MTF junkies are aware that I’ve published all of our prime lens MTF curves in a series of articles by brand, and that I said I would just add new lenses to those articles. I recently tested a series of new prime lenses, though, and thought they were also worth putting up together because I think it’s a good illustration of recent trends.

Of course, the Sony Fanpeoples have already launched their usual conspiracy theories about “Roger won’t publish the 24mm test results because he doesn’t want to acknowledge how it kicks everyone else’s 24mm ass.” Wrong, oh ye internet conspiracy theorists. The Sony 24mm f1.4 GM has been available for a while, but honestly, we’ve had trouble keeping enough in stock for me to test it.

I was able to grab the first shipment of Sony 35mm f/1.8 lens right before they shipped out. The Tamron 35mm f/1.4 SP was kind of lost in the shuffle; we’ve had some but it took a while to rotate 10 copies over to the lab to test. And, full disclosure, I wasn’t banging on tables to test it because Tamron always makes good, but not best-in-class, lenses.

From the moment this lens was released, Sony shooters have lost their usual understated decorum and declared loudly it was the best 24mm lens ever made in the history of the universe. 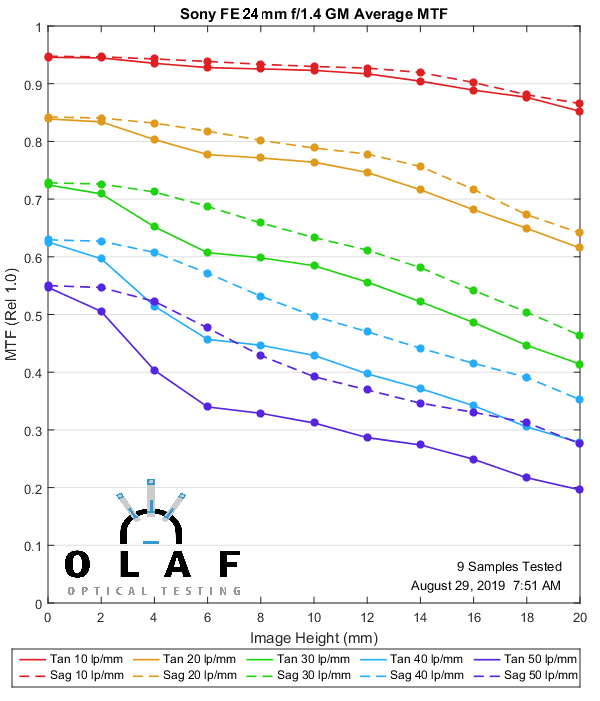 At first glance, you may be a little underwhelmed by the MTF, but let me point out that 24mm f/1.4 lenses are almost always the most difficult primes to design and make and don’t generally have great MTF curves. So I think some comparisons are appropriate here. 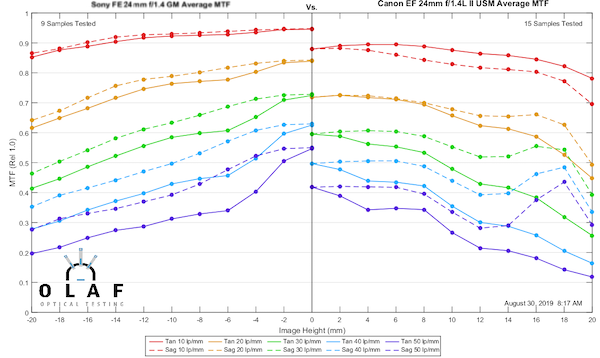 Even comparing the Sony to the Sigma 24mm f1.4 Art, the Sony is clearly better. This is the best 24mm lens we’ve tested. 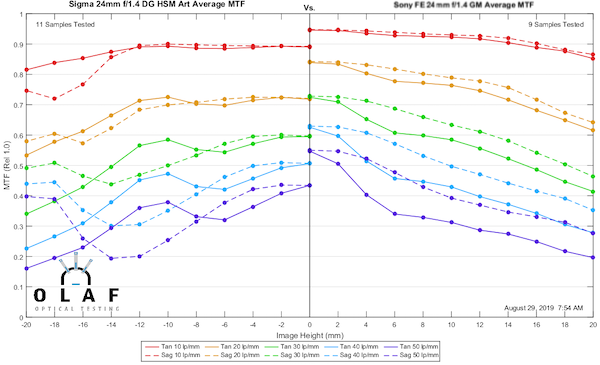 Just for a reality check, though, let’s remember the Canon is a pretty old design, and the Sigma, while not quite that old, was one of the first Art lenses. There has been a lot of improvement in lens design in the last few years, especially with regards to aspheric elements. For that reason, I would like to compare the new Sony to a new 24mm, but really there aren’t any. I did a comparison with the Sigma 28mm Art instead, which is a recent design. Let’s remember, though, that a 28mm lens is expected to be significantly better than a 24mm lens, because of optics and stuff. 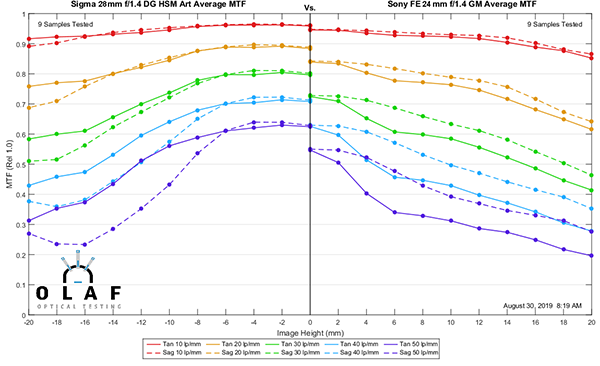 The Sigma is better, but I would call it ‘the difference between a great 24mm and a great 28mm better’. And to be really clear, the Sigma 28mm Art and Zeiss 28mm Otus are the best wide-angles, period. Overall, I have to say the Sony 24mm f1.4 GM is the best 24mm made right now and really a world-class optic. I must also point out that the price of the GM is lower than the Canon and about the same as the Sigma. No Sony Price Penalty here; this is a great lens at a reasonable price. 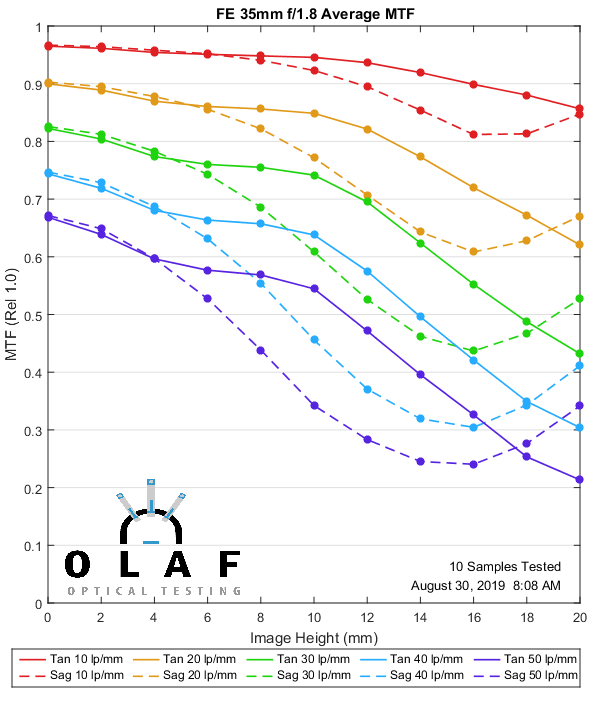 At a glance, that is obviously a pretty good MTF chart, but let’s do some comparisons again. First up we’ll compare it to the Canon 35mm f/2 (and remember for MTF f/2 is an advantage over f/1.8). The Canon has a lower price, but the Sony is better at f/1.8 than the Canon is at f/2. 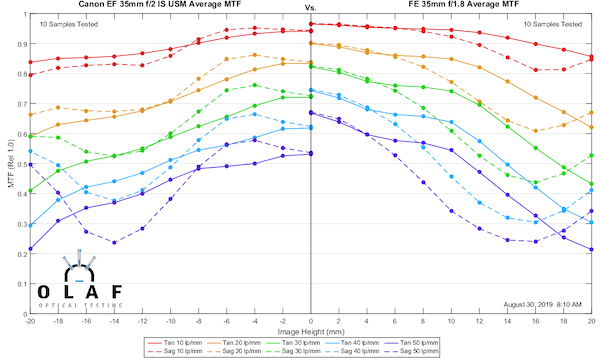 For the next comparison, we’ll match the Sony 35mm to one of my favorite bargain lenses, the Tamron 35mm f/1.8 VC. Again, the Sony lens is clearly better. 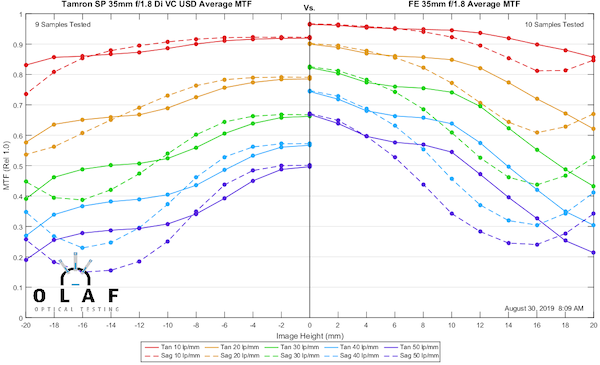 Like the 24mm, the Sony 35mm f/1.8 is exceptionally good. There’s no question that Sony has been cranking out one excellent lens after another lately, and this is coming from someone who ravaged the first, and many of the second, generation Sony FE lenses.

Speaking of first-generation FE lenses I despise (nice segue, eh?) let’s compare the f/1.8 with the Sony 35mm f1.4 ZA, the lens that probably sold more Canon-to-Sony FE adapters than any other. Sure, f/1.8 has an MTF advantage over f/1.4. But what you have here is a clearly superior $700 lens kicking the crap out of an inferior $1,500 lens. Also please realize if you leave a comment about how awesome your 35mm ZA is, we will all realize you mean ‘because I don’t have to use an Instagram filter to smooth my skin before I post my 800-pixel selfies’. 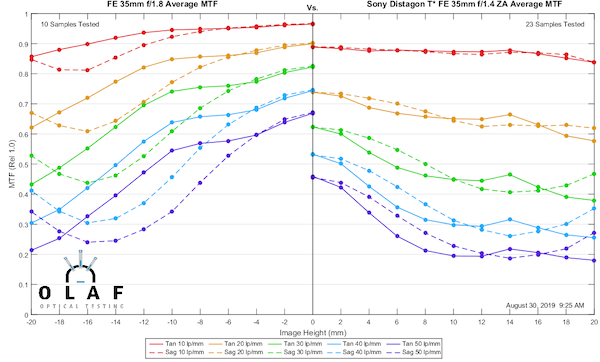 OK, well so far, we’ve seen Sony kick the crap out of the competition (even when the competition is Sony), but it’s time to look at the lens I expected to be ‘pretty good at an excellent price’. The Tamron wins at most initials in the name, which I know is important to them, but other than that I expected this portion of the post to be about ‘worth the money’. 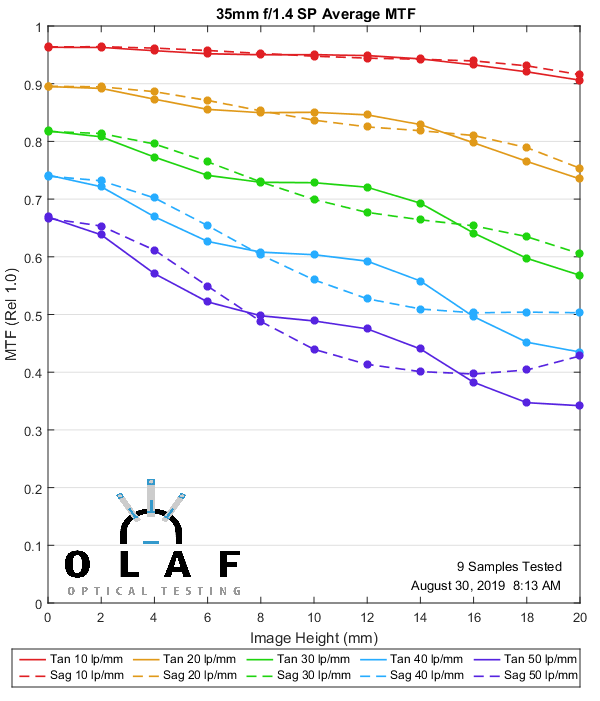 What I got, though, was DAMN THAT’S GOOD! Great center sharpness, maintains sharpness well out to the edges, very little separation between sagittal and tangential lines. So I put up a quick comparison to the excellent Canon 35mm f1.4L Mk II lens. The $900 Tamron is clearly a bit better than the $1,500 Canon, which makes it better than the Nikon 35mm f1.4 G or Sigma 35mm f1.4 Art. 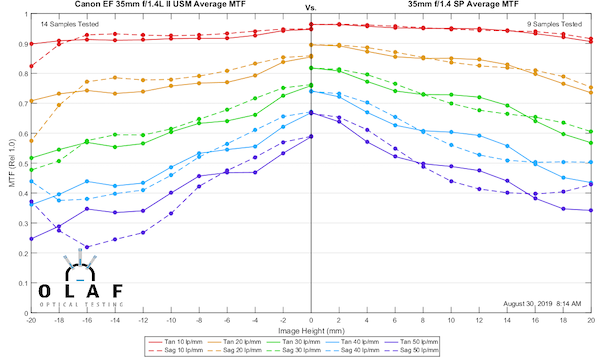 Since I’d just sung the praises of the Sony 35mm f/1.8 lens, I decided I’d compare those two, even though the Tamron isn’t available in FE mount. As always, the f/1.8 lens has an advantage over the f/1.4 lens. Despite that advantage, it’s absolutely a draw in the center, but the Tamron is a bit better in the outer half of the image. So move over Sony, you were the 35mm king for about a day and a half; the time it took to run the Tamron tests. 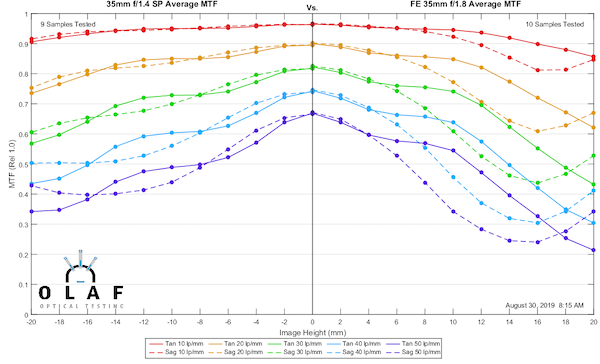 As always, what I present you is just resolution testing. I don’t check the bokeh, how well it autofocuses, or anything else that really matters. Just resolution.

As is so often the case, my expectations were, uhm, less correct than they might have been. I expected the Tamron to be a nice lens at a good price. Instead, it is, for the moment, optically the best 35mm lens you can get, and at a price that should make you want to get it.

I thought the Sony 35mm would be better than the old 35mm f/1.4 ZA lens, mostly because that bar was set so low. It was better than that, it’s a superb little lens. Even though it sets new price highs for an f/1.8 prime, I’d definitely say it’s worth the money.

The Sony 24mm f/1.4 GM was as expected. It’s the best 24mm on the market for any brand and it’s priced reasonably for what it is.

Yes, I made up that word since I’m concluding the conclusions with some speculations. Feel free to use it, though, I think it’s a great word.

For the last 2 years or so, we’ve been seeing a number of lens manufacturers make some amazing jumps in image quality. Sigma’s 28mm and 40mm Art lenses are far better than the older 24mm and 35mm Arts. It seems every Sony lens made recently is leaps and bounds better than what they turned out a few years ago. Tamron is suddenly tossing out world-class lenses. (I’m not going to bring Canon R and Nikon Z lenses into the discussion because of different mounts.)

We know some strides have been made in creating better and more complex aspheric lenses in larger sizes and with more accuracy. I would assume the improvements in aspherics are also reflected in more accurate shaping and polishing of non-aspheric glass. And I know that there have been strides made in optomechanics; placing the elements more accurately and refining how to adjust those elements for the best optical quality.

The bottom line is that you can generally be fairly sure, at this moment in time, that a lens designed more recently is going to be optically superior to one designed a decade or more ago. In 2010 we were all waiting for the next sensor with higher resolution. Those sensor resolution jumps seem to be slowing down now; but perhaps lens resolution jumps are going to take their place.