Review of the Sony RX100 VII 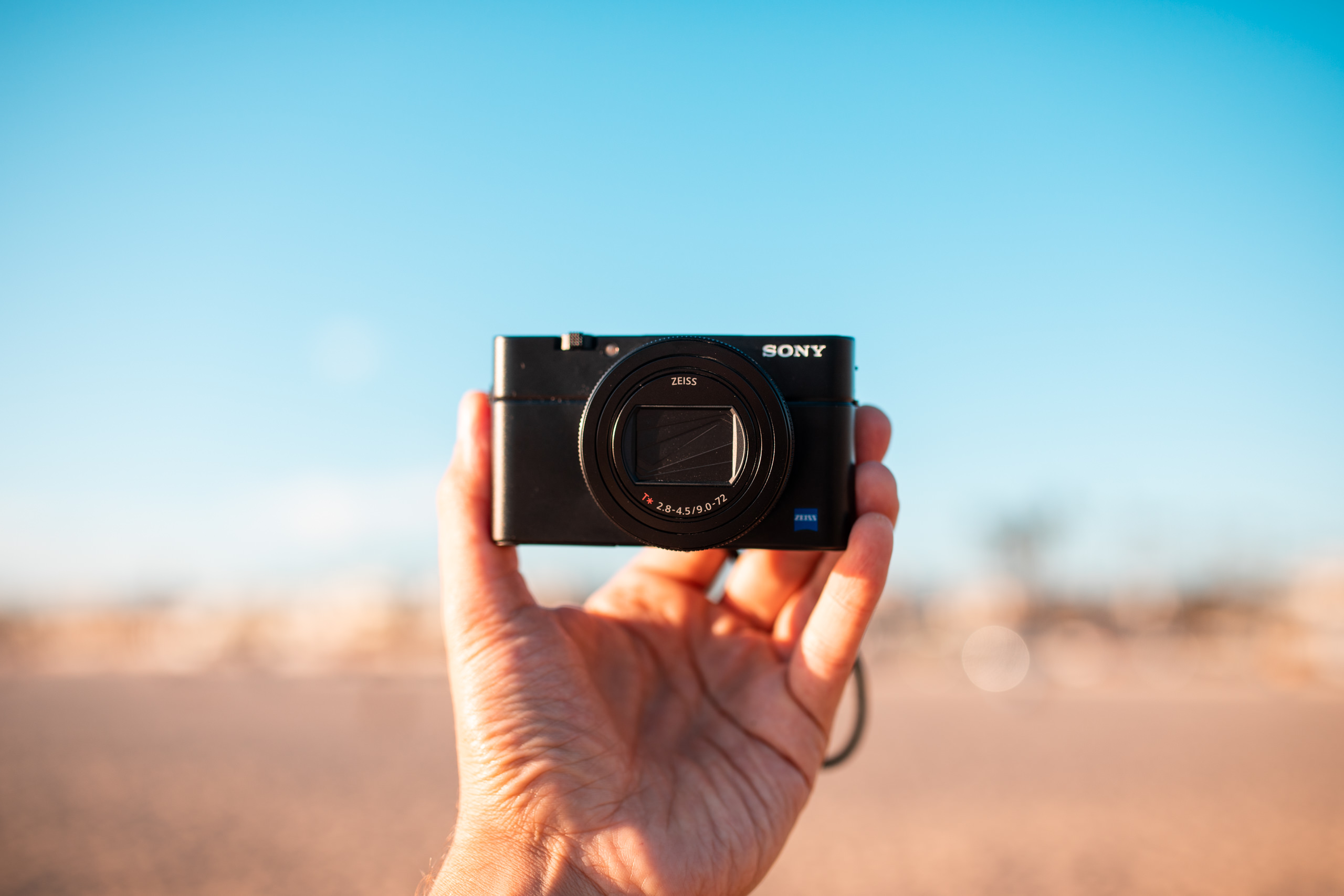 It’s no secret in the photo/video world that Sony is doing everything they can to set the standards for meaningful progress and innovation. I’ve also watched as they have given quality attention to the social space of photographers and made unprecedented leaps to partner with the creators that use their gear. Suffice it to say, I respect the Sony game, and even if I don’t prefer all of their equipment, I think they are doing great things for the industry as a whole.

For an upcoming campaign I am shooting, I was/am in the market for something simple, but versatile, to cover some video needs, such as daily vlog, highlights, b-reel. It HAD to be compact – there is no way I was considering taking another full-body camera with lenses. Traveling light and inconspicuous are not peripheral qualities in equipment, sometimes they are the dealbreaker based on how mobile I need to be. After asking some friends who have much more experience than I in the video arena, there was some consensus – the Sony RX100 Mark VII. 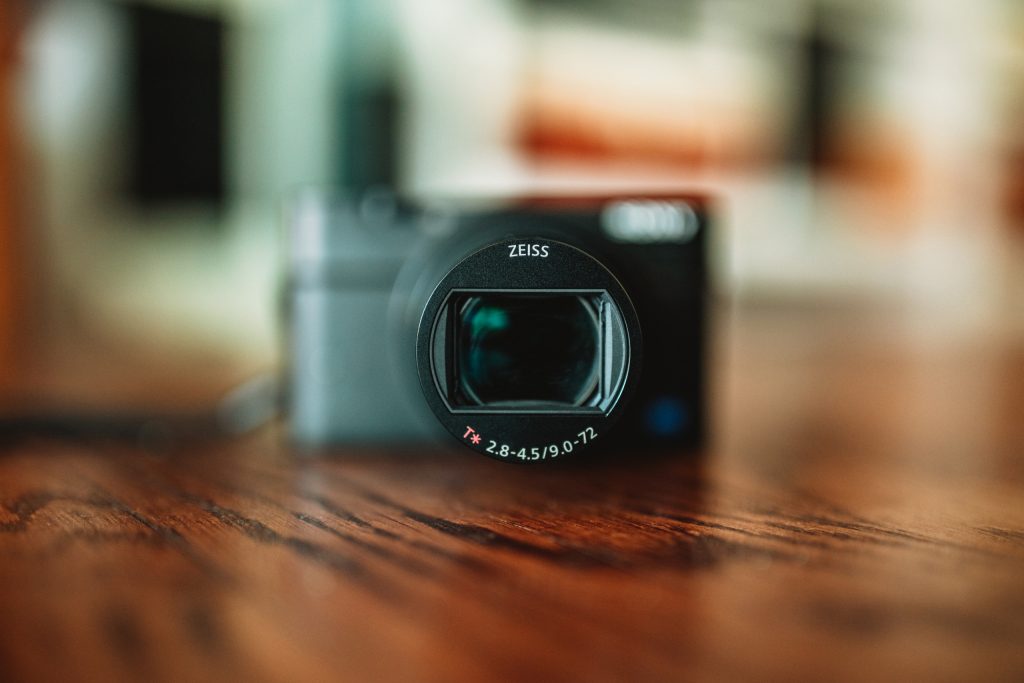 I’ll share throughout my tactile and primary impressions, but I’ll try also to emphasize the technical aspects that move the needle in case you are in the same boat and needing/wanting to add a new piece of gear to your bag. Here is my report card for the Sony RX100 Mark VII. 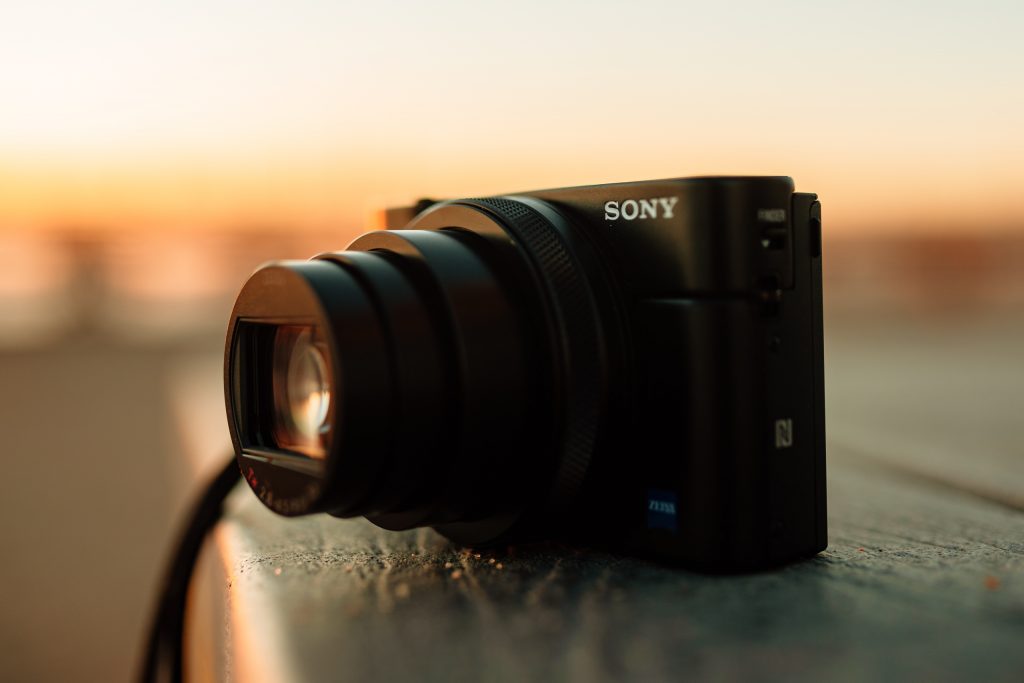 For those of you who are hobbyists with tiny mouse hands, this might be the only camera you would ever need. I can’t imagine there is a millimeter of spare space inside this camera’s casing. It is small but very compact and very sturdy, nothing about it feels cheap. No need to add it to your bag when it could just as easily be added to your pocket. The (-) is strictly because for me to use it with ease-of-mind, I have to use the wrist strap, so for my taste, it might be a bit too small. 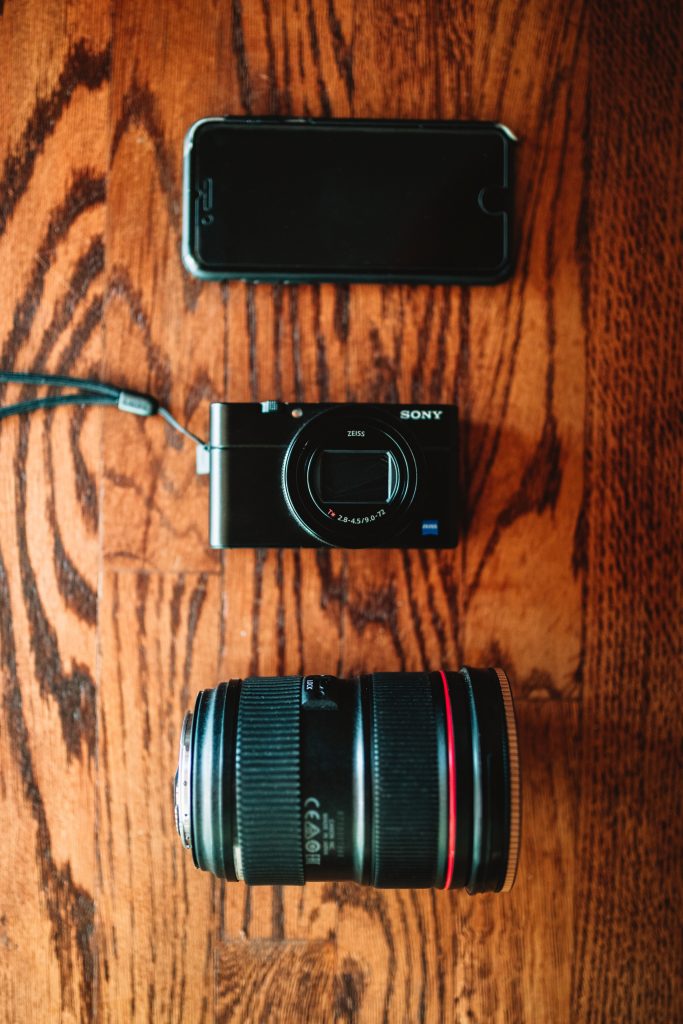 This is where Sony, across the board, is looking like a High School senior playing against the freshmen. From the super sticky (0.02-sec!) AF, it’s 357 autofocus points, to the quality and length of the zoom, to the variety of video formats, color profiles, low light performance, on and on. I had this camera a week to review and feel like I only just got a small taste of what I’m sure it can do. The way it was able to track with a breaking wave and somehow find the contrast points fast enough to get each point of mist was a new experience for me. 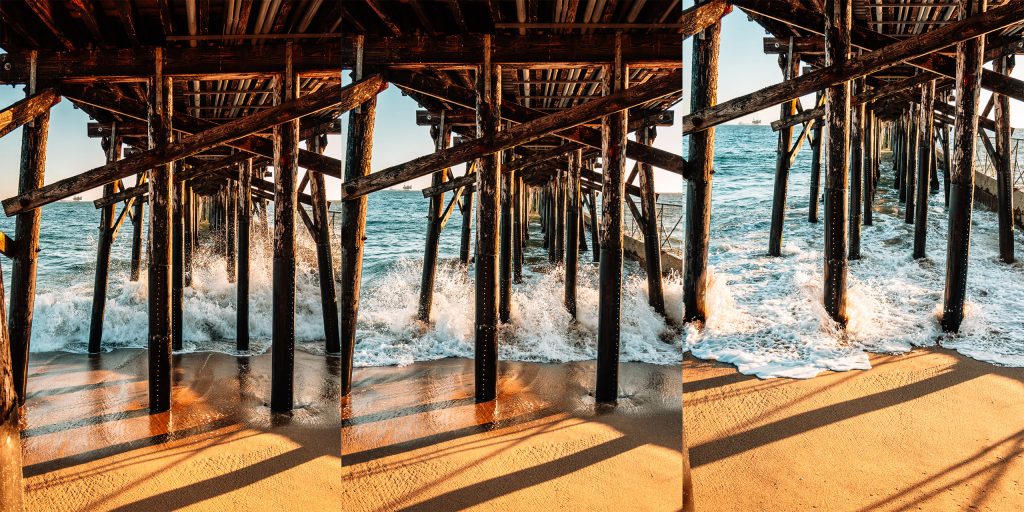 Watching the autofocus track this wave as it crashed in and locked focus in real-time to snap off its 20fps shots effortlessly was a thing of beauty. The dynamic range is impressive, but had some less than pleasant results in the color channels for anything not correctly exposed. The Sony 1” type 20.1 Megapixel CMOS sensor lives up to the Sony name. But, this isn’t a camera I would use for high-quality client work – then again, this is a compact camera, and making that statement might be obvious. That being said, with good light, it stood side by side to my Canon 5D Mark IV and had very similar results. I shot this at 35mm and all the same settings across the board in Raw and processed using the exact same settings. 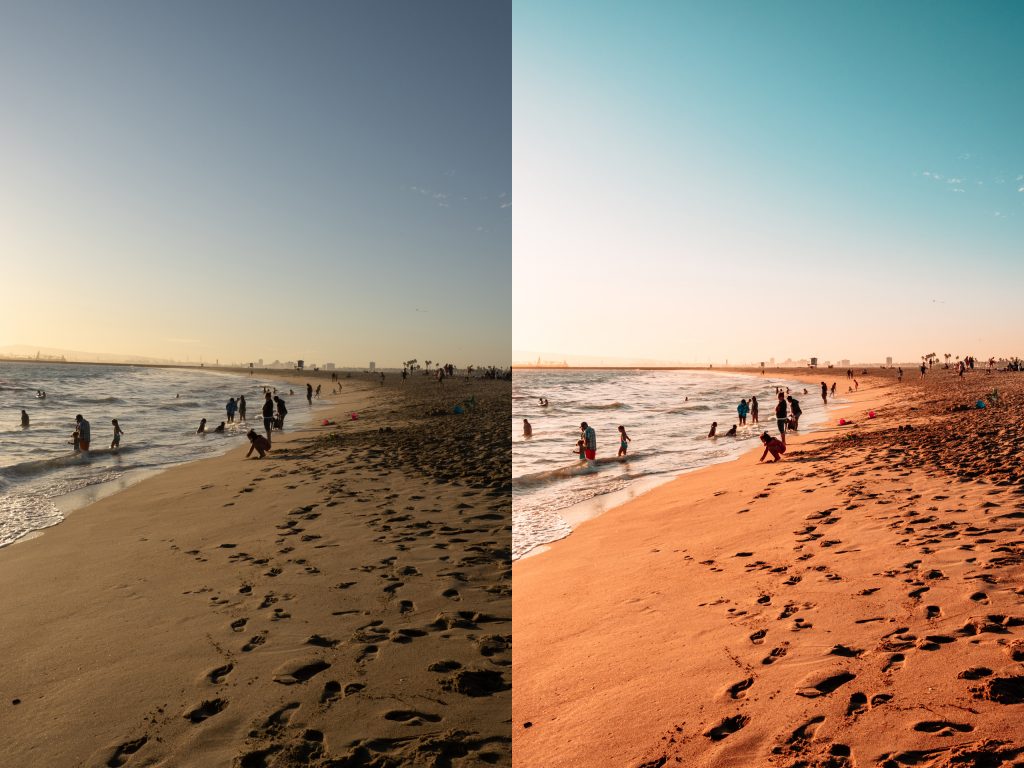 And here is the Canon 5D Mark IV. 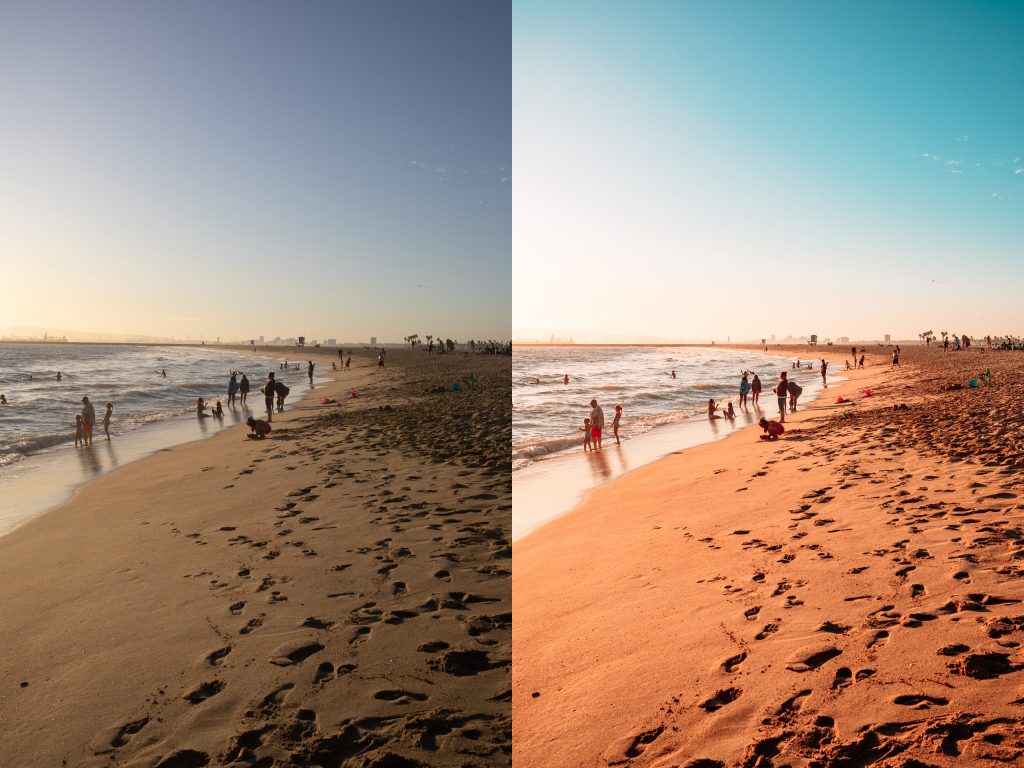 I was also impressed with the Sony RX100VII’s ability to recover the underexposed image. The overexposed example I have was less pleasant a result, with the color becoming very muddled, but the underexposed corrected shots, even with very noticeable grain, weren’t half bad. This first example went from extremely underexposed to as exposed as I could correct while still usable. The second shot shows an over/underexposed comparison. 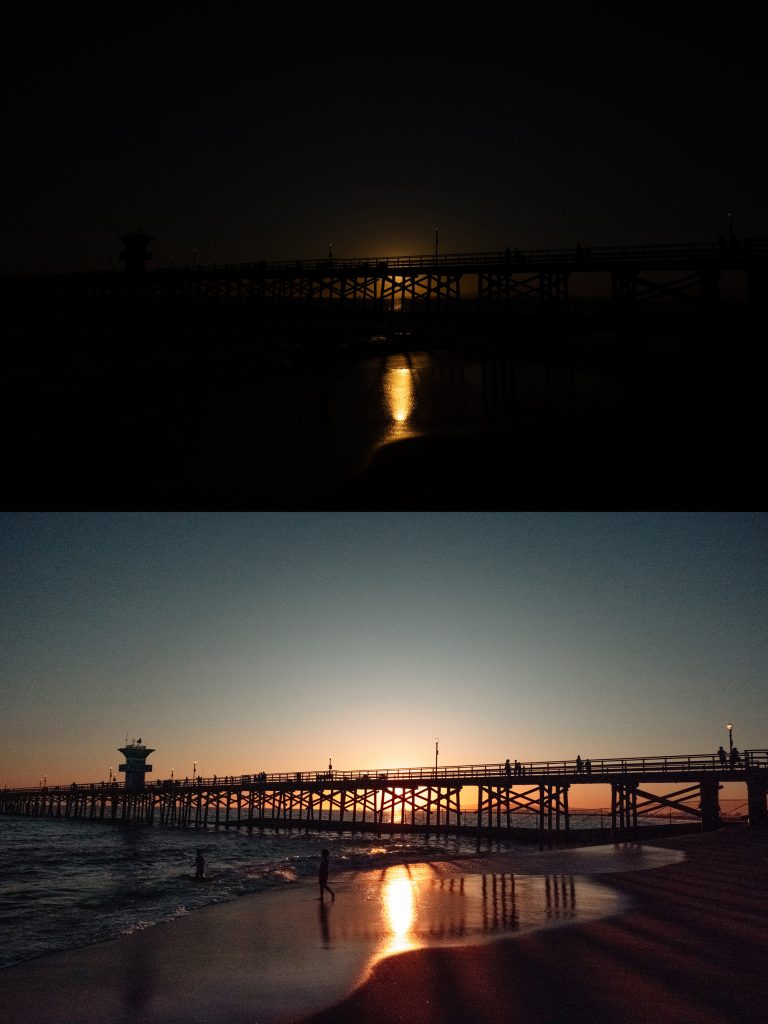 The noticeable difference came in the finer details of the quality of color in the highlights and shadows and the overall sharpness of the image at 100% crop, but at $1200 it’s already less than just about any lens I have in my bag. 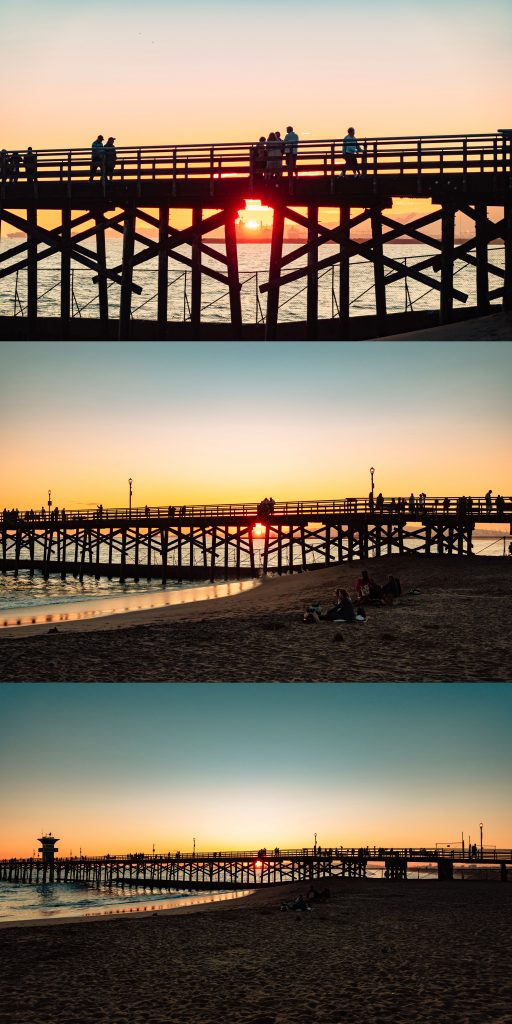 This was my foremost curiosity when trying the camera out. I turned it around on myself with its 180-degree tiltable display monitor and watched the realtime Eye-AF track with me perfectly. It may not be able to overcome the discomfort I feel with filming myself, but for those of you who that’s not an issue, you’ll be able to get yourself in focus every time effortlessly. It has enhanced image stabilization with 4k recording, so getting high enough resolution video and usable video is effortless. With how much I love the post-processing creativity its sLog2 and sLog3 profiles were one of my main interests. I wanted to be able to have as much freedom as I feel editing RAW camera shots as I do with my video, and this felt close. Sony’s Log profiles were very flexible in Davinci Resolve and Adobe Premiere Pro. I graded a short video and placed them side by side with a few different looks; you can watch here.

The 120fps for HD video is ultimately what I was searching for. 60fps is great, but for b-roll shots to cut between on recap videos and highlight videos, this absolutely does the trick. The onboard Image Stabilization is also a life-saver. With how small this camera is, it moves quite a bit more in my hands than other larger cameras. Getting a handheld shot that is worth keeping takes a little more effort, and that’s where the onboard IS steps in and helps, and there are even multiple enhanced SteadyShot options to make it even easier. 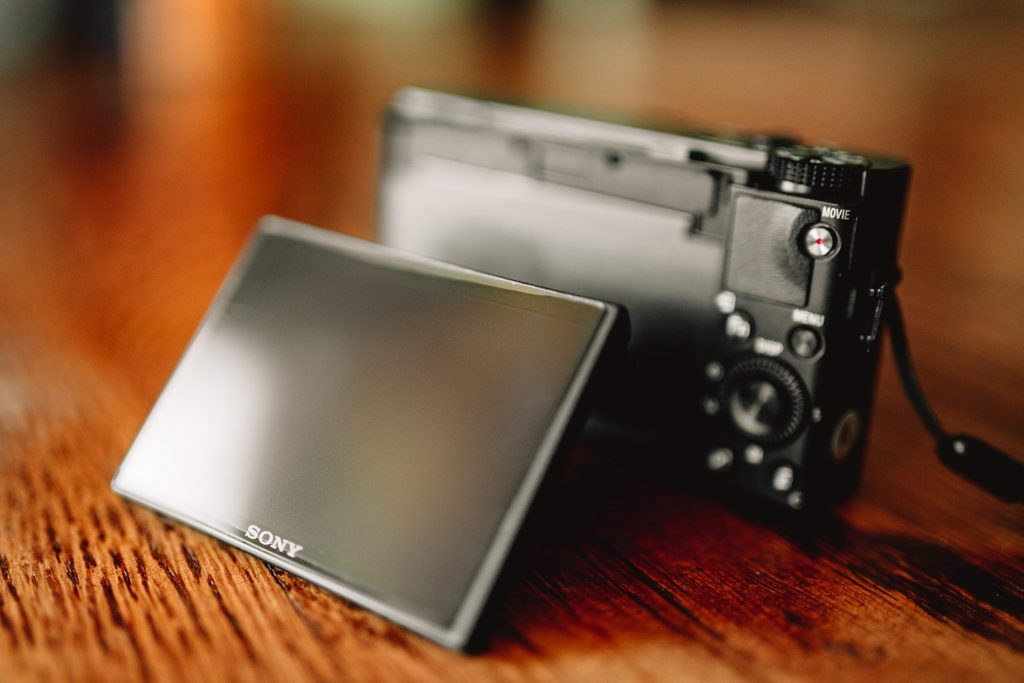 Take this grade with a grain of salt because I’m not a native Sony user, I’m sure someone else with more foreknowledge might be able to step in and understand it easily and quickly. In my case, I was frustrated with navigating the menu to adjust the ISO so frequently when shooting in manual – and I like the option to adjust ISO, aperture, and shutter speed as quickly as possible as a run and gun shooter. I tried and failed to get the sLog color profile only to apply when I switched to video and then revert back to ‘none’ when shooting RAW photos with no luck. I’m sure with another month of use, this grade might end up a B or B+, but with big hands and fat thumbs, I’m not sure I want to do minor surgery every time I need to get a new menu option while I’m shooting. It could be an old-dog-new-tricks scenario with me for how long I’ve shot with Canon DSLR’s, but it was also not impossible to go out on my first night touching this camera and come back with a couple of video clips and photos that I liked.

If I had weeks to use all of the top compact cameras on the market, this grade might be way underscored, and with respect I give others I’ve known to review this, it may be on top of the pile by a long shot. For the video use, I would look for as a complement to my photo work, which I would stick with the camera I have, the Sony RX100VII was perfect. If I wanted to travel extraordinarily light or had to leave my bulky camera back at home for a hike/climb, this would do the job. The other intangible benefit you get with Sony equipment is their willingness to keep improving the products by making software/firmware updates available to those that have their gear – meaning if they can give you a slight upgrade on the existing technology, they will. That’s cool. If I was vlogging, needing a dedicated b-roll camera, or mostly showing off my work online or on the phone, this could be plenty for you. It does it all and does it all either well or very well.

Ryan Longnecker is an outdoor travel and landscape photographer based in Long Beach, California. Over the last 16 years, Ryan has pursued creative careers from music to creative direction and has landed in photography, design, and social media strategy. His passion is to work alongside anyone who is bringing beauty and hope into the world, making it a little less cynical and more beautiful all the time.