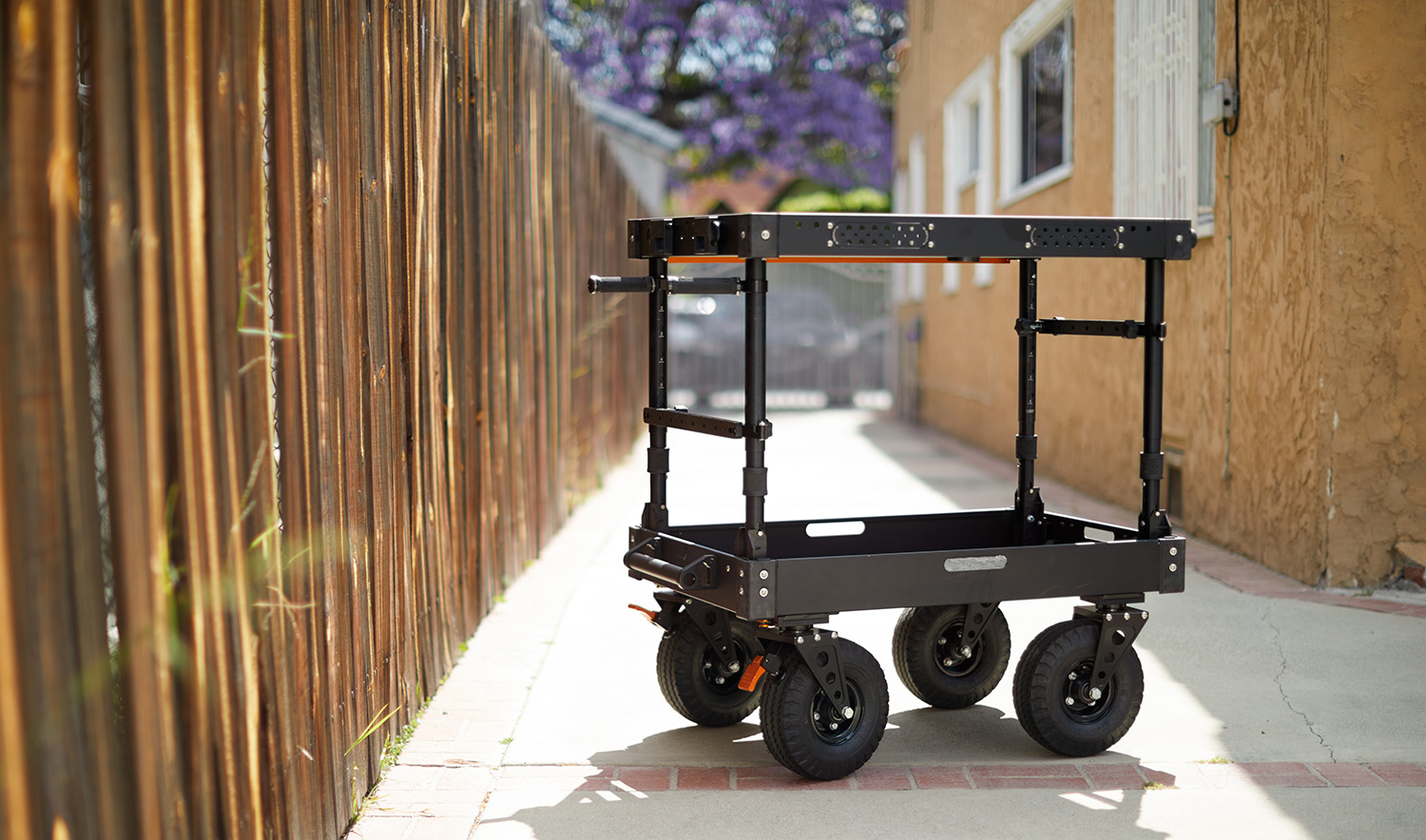 Eventually, when working on set as a videographer or even photographer, you’ll be placed in a position where you’re deadly confident in your skills with the camera, and your confidence to get the job done will rely solely on your skills in time management and organization. No longer will you focus on whether you should use a 35mm or 50mm, and be more concerned on where that extra stinger or two might be, and how quickly you can scrub footage to assure you got a good take. When you reach this point, you’ll find a desire to build out a production cart, or battle station as I like to call it, to work both on location and in the studio. And if you’re reaching that point, perhaps it’s time to start looking into the Inovativ Voyager Evo Production Cart.

While a review on a production cart might not sound like the most exciting thing in the world, I’d like to remind you how much of nerds we are here. We’re often tediously testing multiple copies of lenses to chart their variance, so I’d like to hope that maybe a review on a production cart would also get a read. And while a hero story of it being the sharpest in its focal length might not exist in this written piece, I still find myself showing more appreciation from my production cart than anything else that sits in my studio.

The Voyager EVO is a production cart from California-based company Inovativ. Founded in 2010 by Pat Blewett, Inovativ got its start from a growing frustration with cheap and poorly made equipment carts commonly used on sets and in the workforce. After meeting with a fabricator to build an equipment cart for his own personal use, Pat had the idea to start his own business manufacturing these carts for other friends, and Inovativ was born. Their personal story personally reminded me of Lensrental.com’s own story of humble beginnings, as described in a recent podcast episode. And so, I was quickly excited to see what Pat Blewett had to offer with the Inovativ Voyager EVO cart.

The Voyager EVO Production cart is a full-fledged cart that comes in three different sizes – 30″, 36″ and 42″. For this review, we’re going to focus on the version we have in stock at Lensrentals.com, the 36″ Voyager Evo cart. The Inovativ 36″ EVO is a production cart with a load capacity of 600lbs, in its 68lb frame, and is modular by design allowing you to attach monitors, baby pins, laptop plates, and anything else you might want to throw at it. 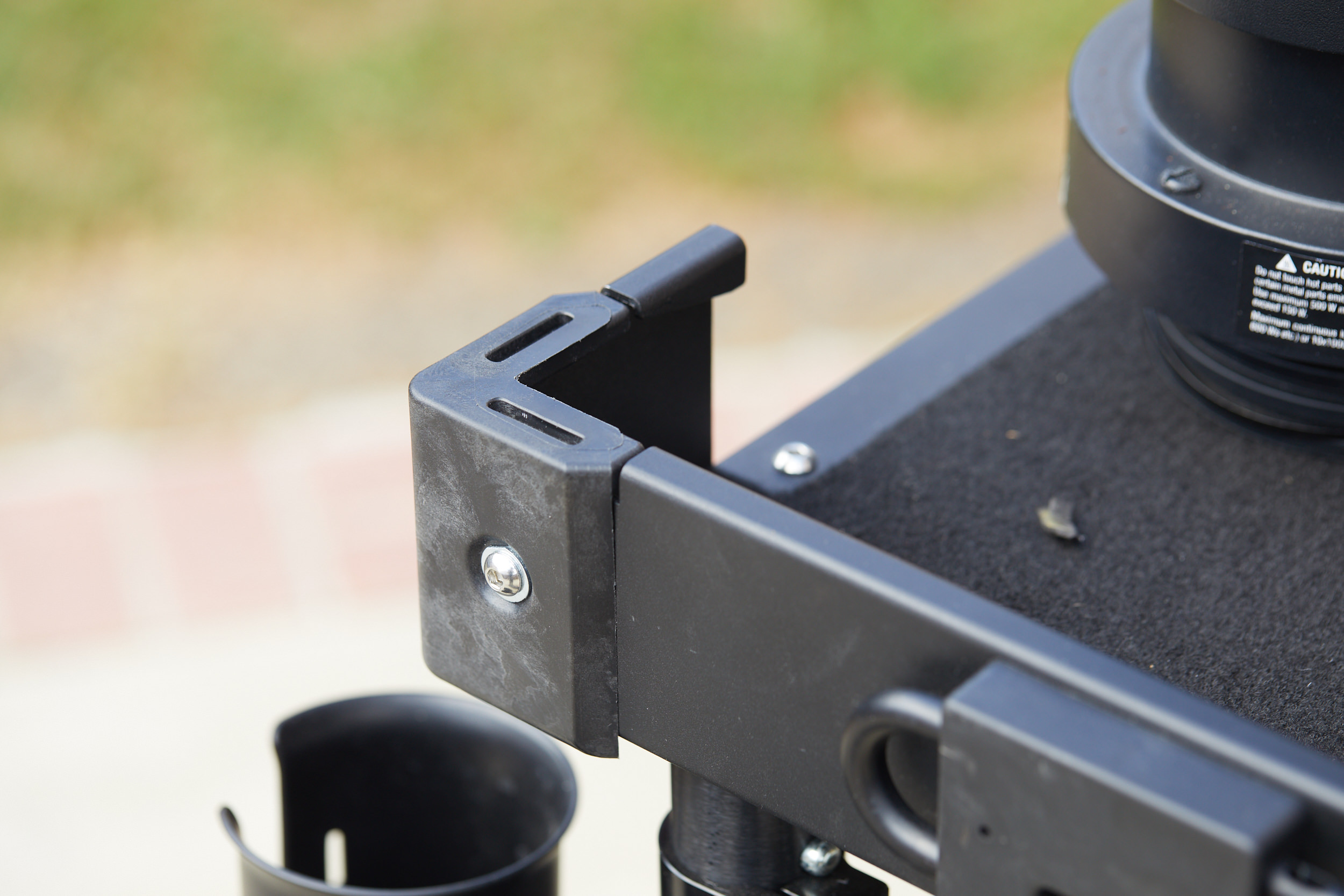 The design practicality doesn’t stop there either. The Inovativ Voyager EVO is designed to work in a large variety of situations, with risers built into the cart allowing for 10″ of adjustments in height in 2″ increments, locking foot brakes for uneven terrain,  and 360-degree rotation on all four wheels, giving you flexibility when moving the cart into tighter locations. The four built-in rail plates give you a large variety of 1/4-20 and 3/8-16 threaded holes, offering creativity of mounting options on the cart. 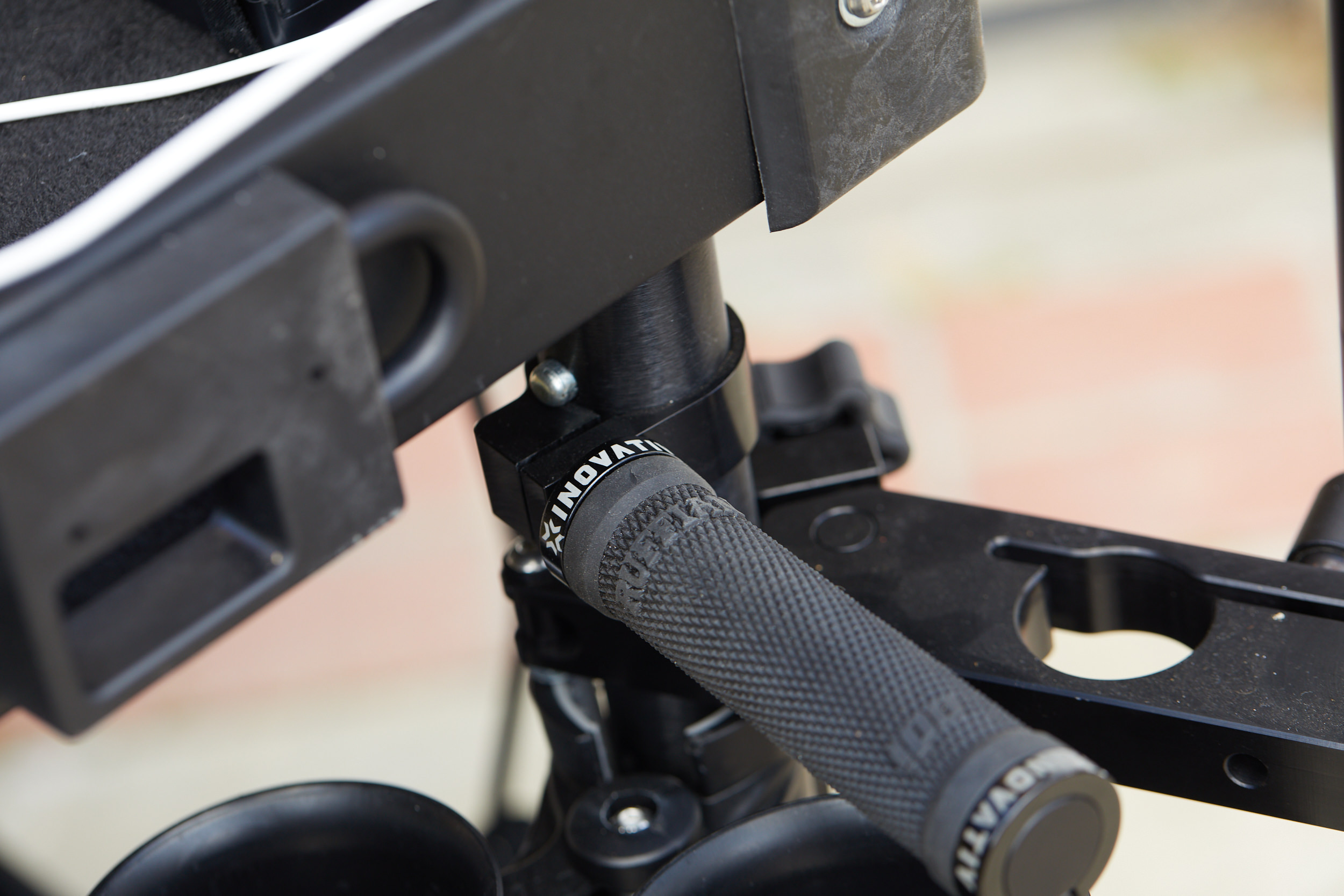 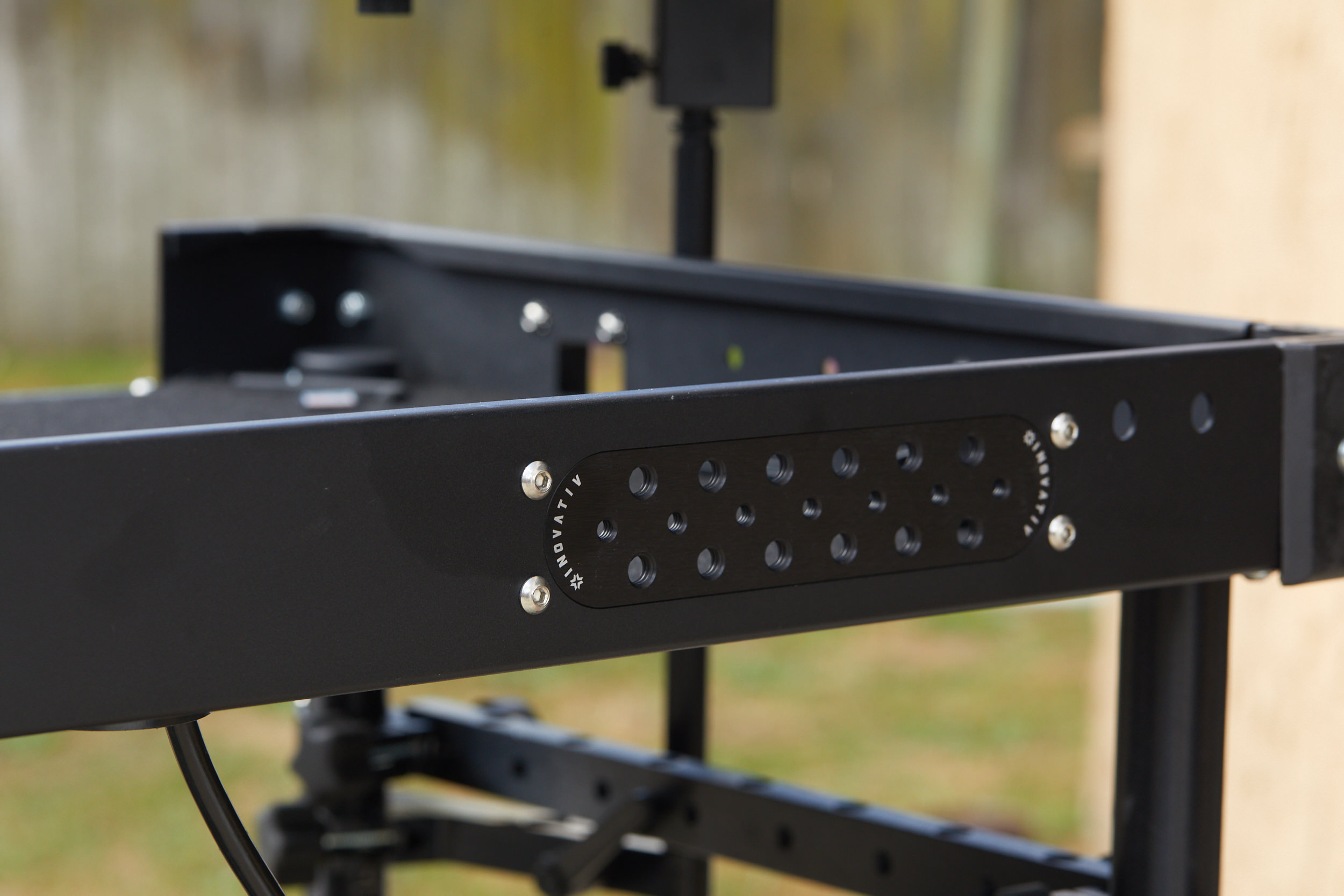 Perhaps most impressively, though, is how the Inovativ Voyager EVO can break down and stow away in a matter of just a couple minutes. By design, the Inovativ Voyager is built to collapse on itself when not in use, making it incredibly easy to transport from one location to the next. No longer are you in need of a grip truck to bring your equipment to the next location, when now it all can sit firmly in the trunk of a midsized sedan. It also gives us the ability to carry them within our inventory and ship them wherever you may be. 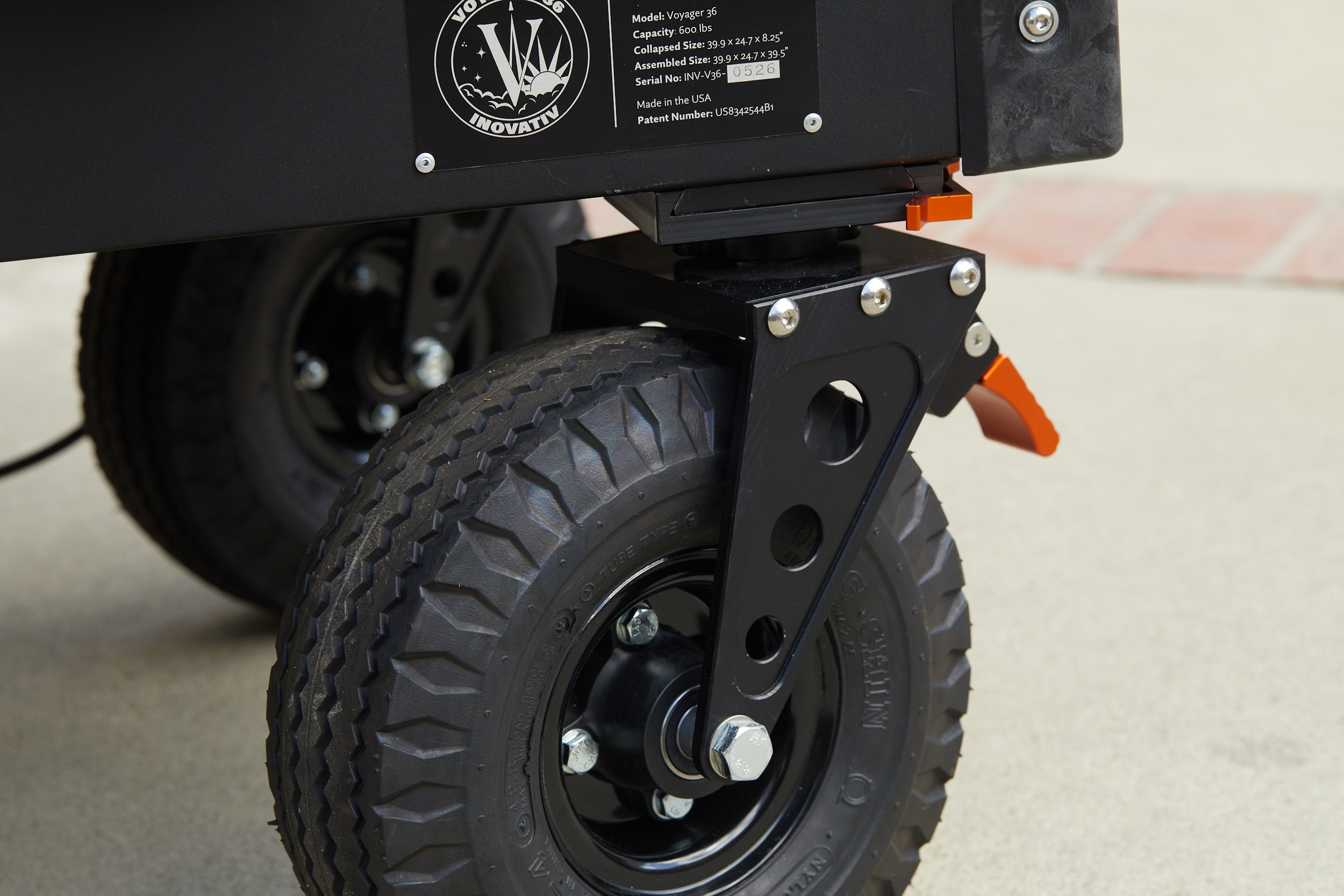 The Inovativ Voyager EVO cart is built with long hard-working days in mind. Constructed of aluminum, nylon, and steel, the cart itself is incredibly robust in design. With large 10″ air-filled wheels, the system feels more like the next rover built for Mars, and less like a cart for photo and video production. Most importantly, its collapsable design seems to have been done with zero sacrifices on the build quality of the cart as a whole. The machined crossbars add rigidity to the cart, and the spring locking design makes sure everything stays in its place. At no moment whatsoever does the cart sway in its rigidity, and with a little practice, it is taken apart and stowed away in 120 seconds or less. 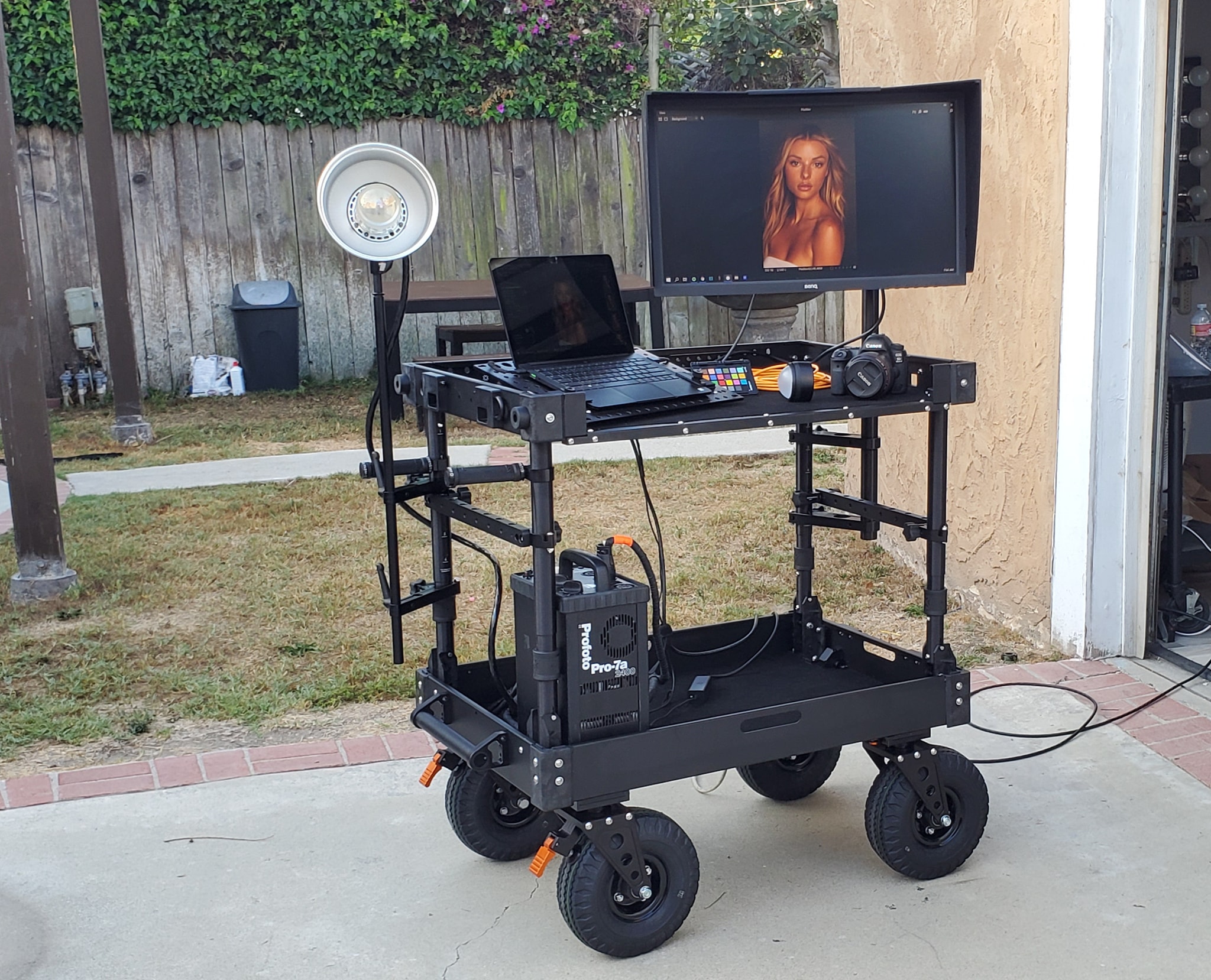 The accessories for the Inovativ Voyager Cart share the same design integrity as the cart itself. For me personally, my go-to accessories are the 5/8″ baby pin system, along with the DigiPlate Pro for my laptop, and the Boa Monitor arm. As a studio photographer by trade, I tether on every shoot that I do, which is a topic I’ve discussed previously on here. Their pairings give me a studio workstation on wheels that can find a home within my personal studio, but with the mobility and freedom to pack in my car and move across town.

Working with the Inovativ Cart

To say that the Inovativ Voyager Cart is easy to work with would be a bit of an understatement as a whole. Fundamentally, the reasons are obvious; it’s essentially a tabletop on wheels with mounting points all over the system. But everything the Voyager EVO does, it does with such simple elegance that makes it impossible to frame as just a simple tabletop. When I first started looking at the Inovativ carts, I wrote them off as something way too expensive for what they are, and something that served a practical purpose, but was way out of my frame of budget. After using an Inovativ cart on set for the first time (through the use of a rental studio having one a couple of years ago), it quickly became apparent that I wouldn’t be able to work to my full potential without one.

Without question, the hardest pill to swallow here is the price. The Inovativ Voyager EVO cart starts at around $3,000 and jumps up in price pretty quickly when you start adding accessories. To be blunt, the price alone puts it out of the range of 95% of people, and a significant component as to why they market it more as a cart for video productions than for photography – because video productions often have films breaching tens of millions of dollars in production costs. In contrast, photoshoots rarely breach 1/10th of that cost. However, Inovativ prides itself on being manufactured and assembled in California and comes with a 5-year warranty (though I’m not sure what could possibly break on these). The build quality removes any doubt on the actual cost of the cart, and I’ve personally never had someone question the price upon actually seeing and using the production cart. Still, it’s expensive.

What Could Be Improved —

To lament back at the intro of this review, I mentioned that a review of a cart might not be the most compelling of topics, and I still stand by that message. For the four or five of you sticking through this until the end, thank you. The Inovativ Voyager EVO cart is a product that helps with something so few products do on set – efficiency. Fundamentally, that makes it an incredibly difficult product to pitch. If you’re weighing your options between an 85mm prime lens to add to your kit verse this, the obvious choice would probably be the lens. The same could be said if you’re looking to add a light or two to your system. But if, after years of hoarding gear, you’re left as sort of that “photographer/videographer that has everything,” then this cart might just be the missing piece to your puzzle. As a studio photographer who works with hair and makeup teams for nearly all of my work, there is nothing more valuable in my system than having a workstation where everyone can view the photos as they’re taken, and make suggestions as needed. The Inovativ Voyager EVO is the one tool that makes that option possible for me and is why it’s one of my favorite pieces of gear in the industry today.