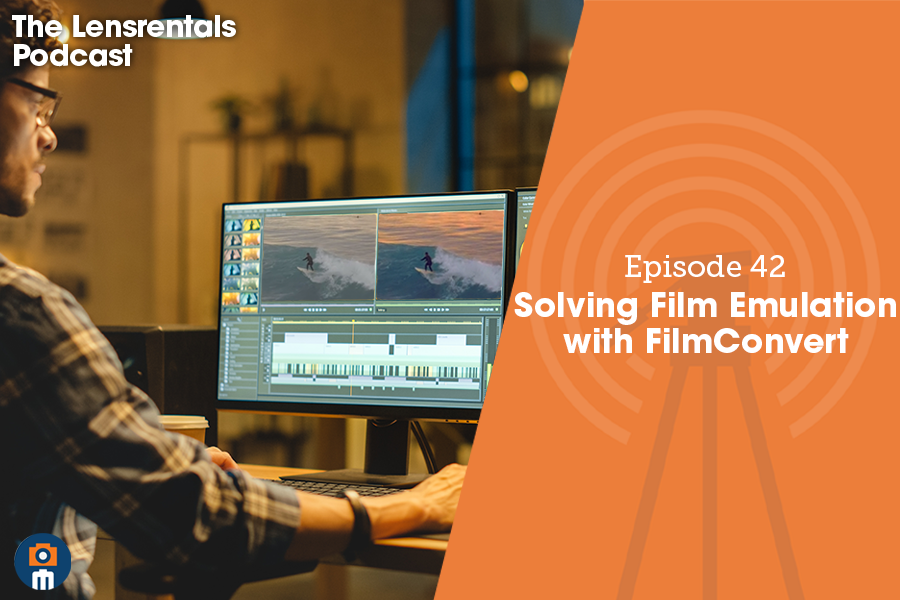 This week on The Lensrentals Podcast we’re talking with Sam Wiles, Color Engineer at FilmConvert. Sam describes FilmConvert as the “Ultimate film conversion plugin.” Available on a multitude of editing suites, as well as a standalone application, FilmConvert is designed to accurately emulate a variety of film stocks. Users can also customize all the intricate settings in the conversions to find a color profile that matches their style and vision.

FilmConvert is far from the only “film look” solution on the market. Google “film luts” and you’ll find thousands of different offerings of varying quality from hundreds of different sources. What the vast majority of these looks have in common, though, is that they’re basically just filters. They’ll likely bump up saturation and contrast, apply a few color adjustments, and maybe throw on some grain, but the traits of the conversion don’t change based on which camera was used to shoot the footage.

This gets a little complicated if you’re not familiar with color correction, but here’s the most helpful analogy I could come up with. Let’s say you’re a doctor. Someone comes into your office one day and asks, “Doc, how can I be healthier?” There are some general recommendations you might be able to make without any more information than that: eat better food, exercise more, drink water, get good sleep, and so on. But without asking a lot more questions you really can’t offer much help. No good doctor would let an office visit end like that, but that’s how most “film look” solutions work. They’re emulating a look without knowing what the original footage looks like, so the best they can do is apply very general changes.

FilmConvert, in this clumsy analogy, is a doctor who’s actually good at their job. Ask an effective doctor “How can I be healthier?” And they won’t just reply “Eat more broccoli.” They’ll do some tests. They’ll ask you about your prior medical history. They’ll ask you what your goals are. And they’ll recommend treatment for your specific needs. After all, how can you treat a disease without a diagnosis? Obviously, film looks aren’t the same as curing sickness, but they’re alike at least in that the end result is a lot better if you have as much information as possible going in.

Rather than simply apply the same filter to any footage you happen to give it, FilmConvert (like a doctor curing specific ailments) is tuned specifically to certain color profiles. S-log gets different color treatment than, say, C-log, because S-log doesn’t look the same as C-log. It’s clearly the more accurate and effective way to design a film emulation look, but this approach is the exception and not the rule because it’s so much more complicated than just making a filter.

The engineers at FilmConvert painstakingly test and document the color profiles of the film stocks they’re emulating, down to the grain. They then perform those same tests on the hundreds of cameras and color profiles that the software supports, allowing them to create conversion algorithms that are far more accurate than a simple filter. In short, they’re not just converting video color to film color. They’re converting this very specific color profile to this very specific film stock. And, as you can see on their website, the results are remarkably accurate. So accurate in fact, that users eventually started using FilmConvert as a camera matching solution.

As we’ve mentioned, color science between cameras can be very visibly different, even when shooting in log, and the process of matching color between shots from different cameras can be incredibly time-consuming. With a simpler film look solution, that difference in color science would follow through to a graded shot. Apply a simple filter to S-log and C-log, and the graded images won’t match because the original footage didn’t match. FilmConvert, on the other hand, since it takes the differences between color profiles into account when emulating film, can essentially match C-log to S-log (or any of the other color profiles that the software supports) by converting those two different color profiles to the same film look.

CineMatch, the new software from the FilmConvert team, takes that same principle and makes it more flexible. Using much of the same data from all the tests that needed to be done for FilmConvert, CineMatch can pretty precisely match the color science on footage from different cameras without the added step of then emulating film color. This is super helpful for productions that need to use multiple cameras but don’t necessarily always want to add a “look” to the final product.

1:20 – Sam Wiles explains FilmConvert as “The ultimate film emulation plug-in for your favorite NLE” (that stands for non-linear editing) such as PrimerPro, DaVinci Resolve, Final Cut, etc. They offer tailored film stock looks that are tailored directly to the camera being used, and it has controls specific to that camera. So instead of just being “a film look” it is scientifically tailored to be as if you were shooting on film.
3:00 – FilmConvert does a lot of testing to get these looks just right and Sam explains how they ensure all the elements involved in testing are controlled, how much time and effort can go into testing for color, dynamic range, and how they cover every picture profile within a camera.
4:40 – ARRI, Canon, RED, and Sony aren’t the only sensors that FilmConvert makes packs for, they also deal with iPhones, DJI, and other smaller sensors that aren’t commonly thought of as cinema cameras. Sam tells us about some of the challenges of working with smaller sensors.
7:10 – Even pro’s get shocked! Sam was surprised not that FilmConvert was able to support the iPhone, but that there was a demand for that product.
8:32 – FilmConvert now supports over 100 different cameras.
10:30 – We noticed that FilmConvert gets grain right because it’s not just another filter or overlay. How did they accomplish this? They take into account the exposure in different parts of the image and how grain behaves differently in different portions of the frame.
13:20 – It’s always exciting to see projects using products we like out in the world! FilmConvert was used in the production of Sharp Objects.
14:15 – BREAK
15:00 – CineMatch has recently been introduced as companion software to FilmConvert. It’s a solution for camera matching so if you’ve got footage from an ARRI Alexa, Sony A7S, and a DJI drone the colors will be mix-matched. CineMatch allows the user to target all of the color in a project to their A-cameras, so there is a neutral timeline and base grade from which to then start to do the more fun stuff.
17:20 – CineMatch creators saw the need for a dedicated camera matching tool that wasn’t directly for film stock, but the ease of color correction. You can apply FilmConvert after CineMatch and still get a film look, and use FilmConvert as a creative grading tool, but they wanted to refine CineMatch to make those initial adjustments that are necessary to be as easy as possible.
18:20 – From dynamic range, sensor matching, color science, there were a lot of different elements in building CineMatch, and Sam shares some of those with us.
21:00 – CineMatch currently supports about 80 cameras, and they are always adding more.
22:10 – Ryan and Sam discuss how CineMatch can be used in production as well, not just in post while talking about how some of the features on the Sigma FP point toward it being a directors viewfinder, or a camera to have for reference on a location scout. CineMatch would come in handy if you need reference material to match the log profile of an Alexa as the A-camera, and you want your location scout stills to match that performance.
23:30 – The makers of CineMatch don’t want creators to be afraid of using cameras from multiple different manufacturers because it’s going to be too much of a headache in post. “We really want this to open up the world of multi-cam shooting to everyone.”