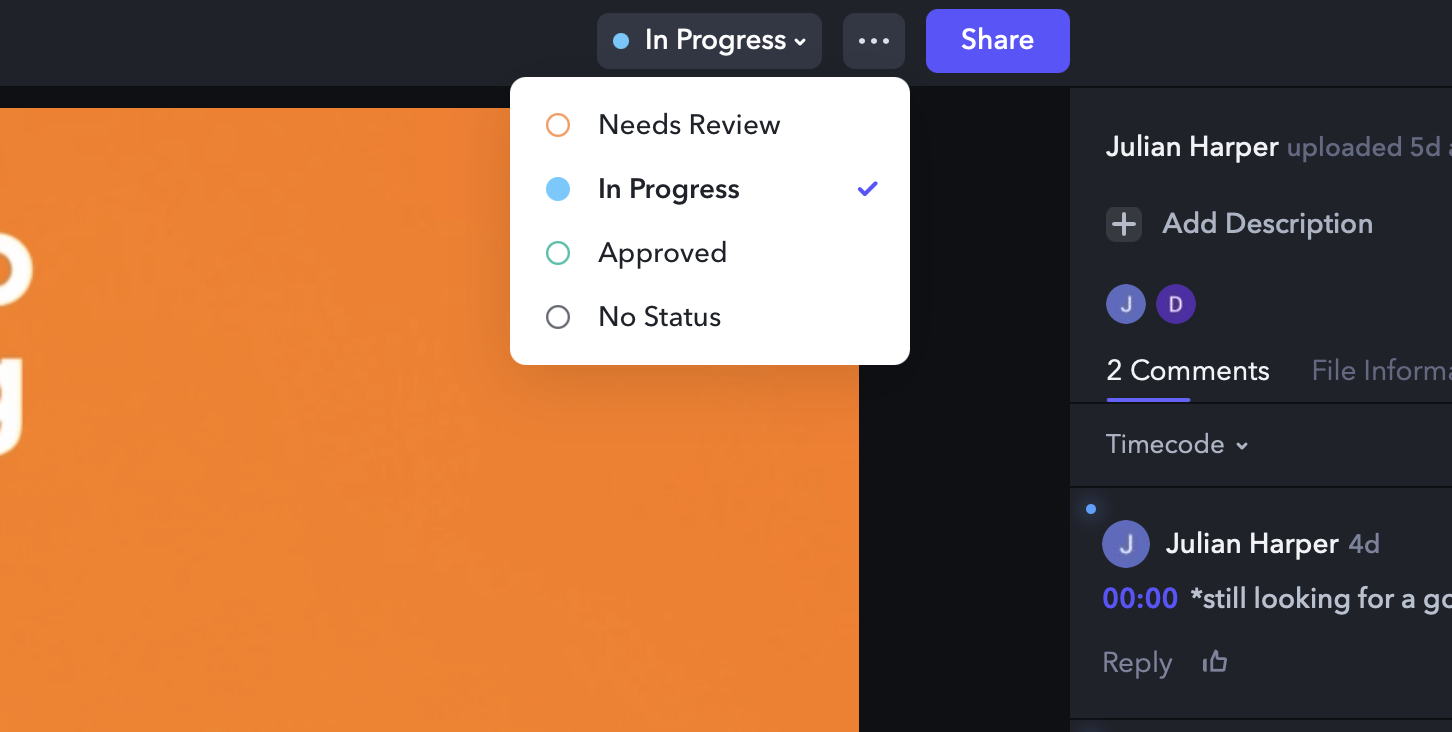 We cover gear a lot on the Lensrentals blog. Which lenses are the sharpest? Which camera has the most features? What does the inside of a GFX100 look like? What we rarely address, especially on the video side, is the equally important field of post-production. It won’t matter what codec you shot or which lenses you used if you can’t turn your footage into a usable end product, and we’ve got just as much experience shaping footage in post as we do shooting in the field. So we thought we’d run a short series of articles in which we highlight some of our favorite post-production services. To be clear, none of these articles are paid promotions or partnerships. If a service costs money, either Lensrentals or the author has signed up and paid exactly how any other consumer would.

An unfortunate truth about a professional video career is that, eventually, after a lot of hard work planning, shooting, and editing your little masterpiece, someone is going to have to review it. Whether it’s a director, producer, or client, the person signing the check will want to look everything over before it’s all said and done, and that can be a challenging process.

First, there’s the challenge of just getting the cut out to whoever needs to see it. It’s easy enough to find a place to host the file, like Google Drive, Dropbox, or one of the countless FTP services out there. But you better make sure the service can playback your export file type, so you’re not asking clients to download huge files and install VLC just to view them. You’ll also need to make sure you can adjust privacy settings so only the intended recipients can view the file. Don’t forget that it needs to be secure because these are important corporate secrets we’re talking about. Oh, AND the whole workflow needs to support mobile so the team can view it on the go. The theoretically simple act of letting the right people view a cut can be a huge headache, and that’s before you even start getting notes.

Often multiple people will need to approve a cut, and their notes will contradict each other. This gets even more confusing when the notes are all coming in from different sources. Try juggling input from 4 different corporate clients across multiple versions of the edit from multiple communication channels like e-mail, texts, in-person meetings, and Google docs. It’s a nightmare that will make you want to, hypothetically, quit your corporate video job in frustration and go work at Lensrentals instead. (This is what I did in the case that’s not clear. Dealing with clients was exactly that frustrating.)

The point I’m getting to here is that all these minor headaches just add annoyance to an already pretty inherently annoying process. Getting edit notes is not fun, but that’s the job. It has to be done. So at the very least, the process of getting those notes should be as painless and straightforward as possible. The tools you’re using to do this annoying work should make the work easier, not harder. Luckily, frame.io is purpose-built for video review. Instead of cobbling together a bunch of different services ad hoc, you’re working with a platform that has been designed specifically to accomplish these disparate tasks. 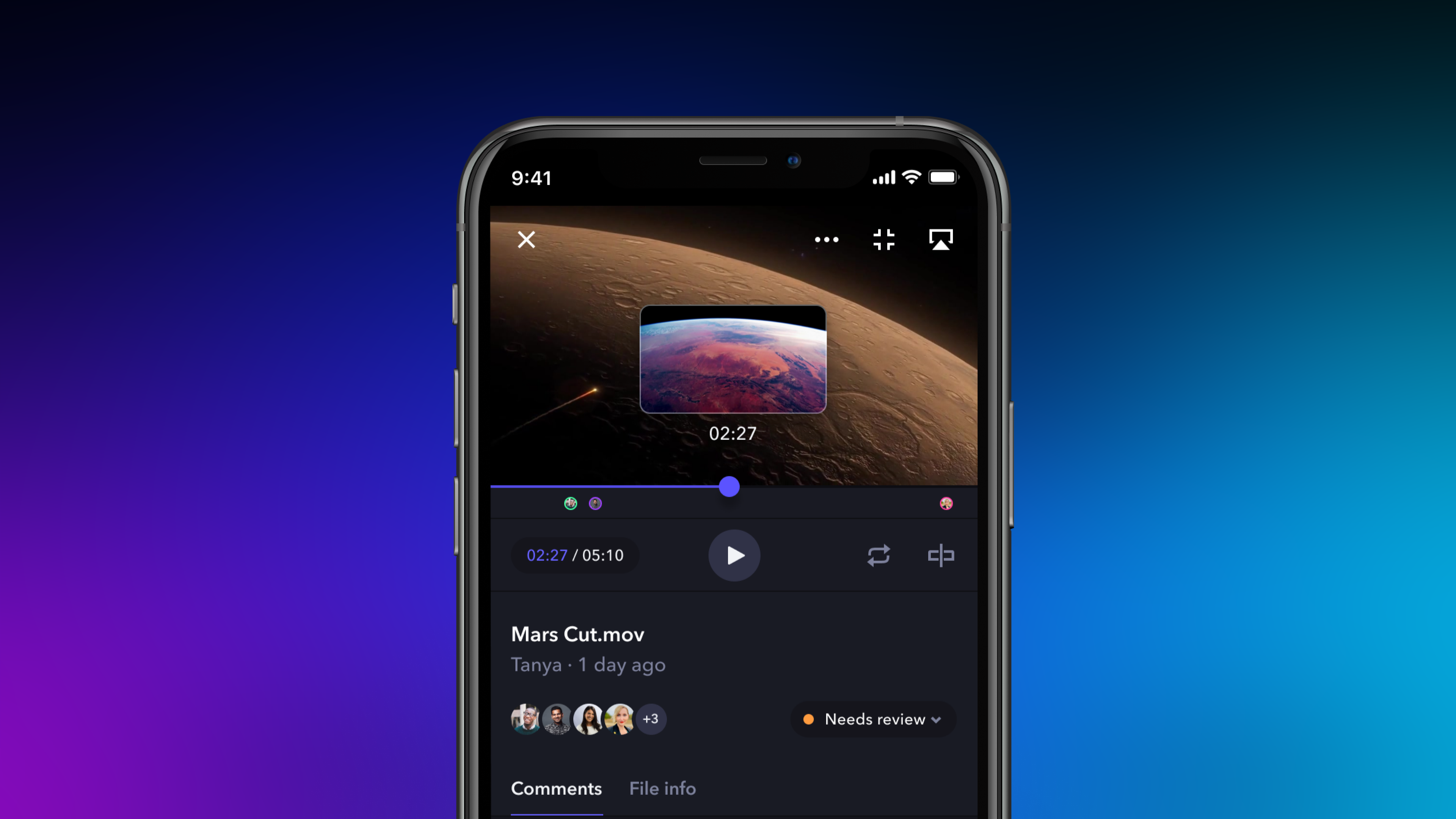 At Lensrentals, we use frame.io to coordinate video production between our Memphis and Boston offices. Between our two YouTube accounts, multiple social media accounts, and external marketing content, we produce a lot of stuff that needs to be seen by a lot of people, and there’s no way we could do that with Google Drive links and e-mail threads.

The process is pretty simple. You start, as you would with any service, by uploading your media. Even at this first step, though, frame.io already sets itself apart from ad hoc services by natively supporting just about any file format. The high-quality originals, either dailies or edit versions, are transcoded automatically into a streaming-friendly MP4 but remain downloadable in their original quality for reference. If you’re uploading multiple files, for a dailies workflow, say, there’s also the frame.io Transfer App, which supports file structures, queues, EDL files, and more. Once your files are up on frame.io, it’s simple to share links, add passwords, and communicate with your team.

Crucially, viewers don’t have to have paid frame.io accounts to comment, so it’s easy for anyone who needs to note your edits to get started without having to jump through a ton of hoops. And the noting process is where frame.io really shines. I genuinely can’t think of a helpful feature that’s missing. First of all, every comment includes a frame-accurate timecode reference by default. Comments can also be set to only be visible to certain groups, in case your edit team wants to make a note that they’d rather the client not be able to see. Comments can be threaded and liked, so it’s easy to keep track of what’s been seen and what hasn’t. It even supports emoji. The comment system doesn’t just stop at text, though. Viewers can actually annotate their notes with brush strokes, arrows, and pre-made shapes, enabling them to more clearly reference particular elements or sections on the screen. frame.io also supports versioning and approval statuses. Hence, it’s always clear which draft of the edit viewers are commenting on and at what point the final cut is approved. Previous versions are saved until you delete them, so it’s easy to track progress against earlier cuts. 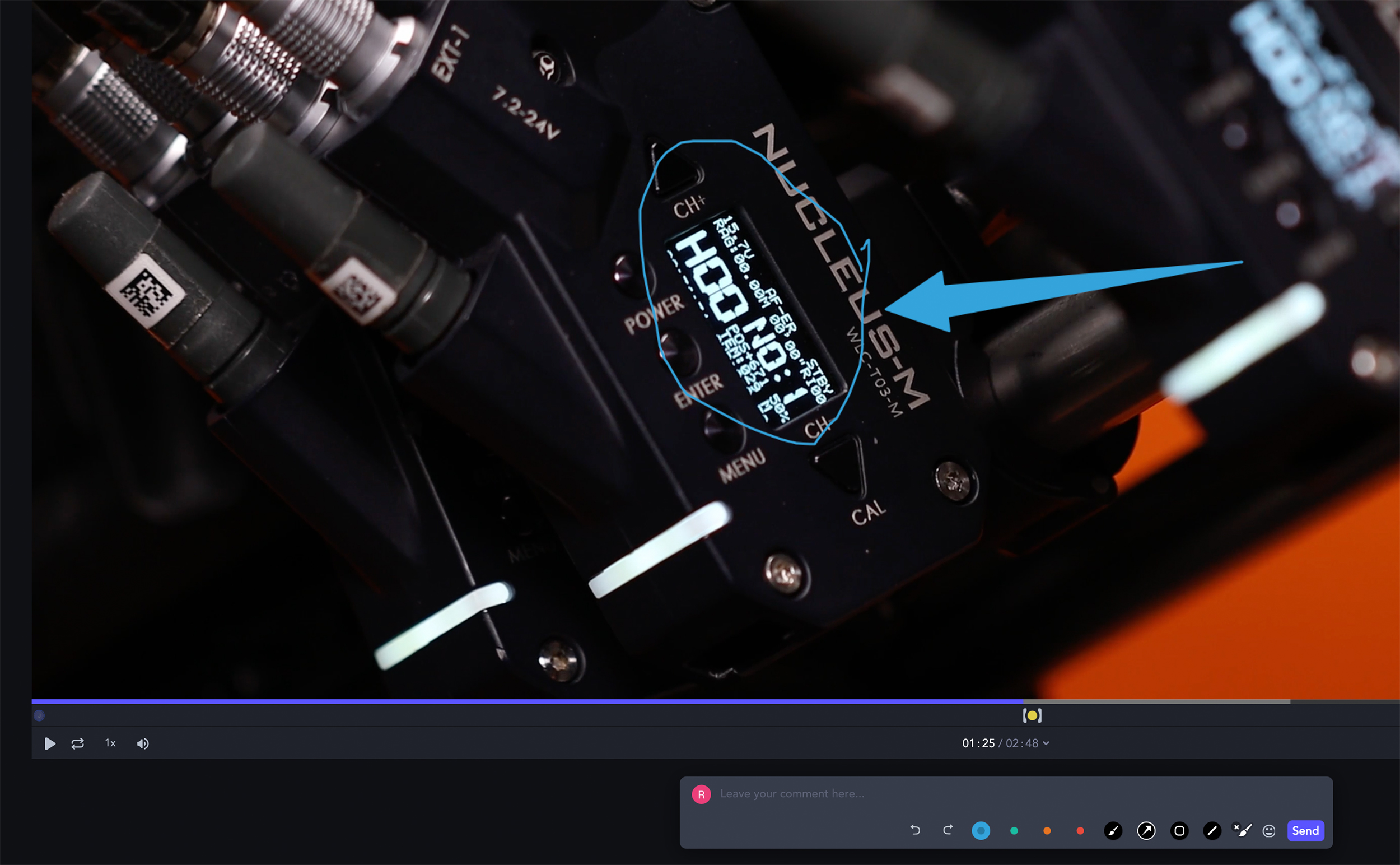 When it’s time to incorporate these notes, you’ve got a few options. You could download all the comments. frame.io will give you a nice simple CSV or plain text file if that’s what you want. Or, if you’re just a little fancier than that, you can download an XML file tailored specifically for your NLE that will turn the comments into markers on your timeline. Finally, if you live in the future and don’t have time for XMLs, you can take advantage of frame.io‘s full integration with your software. Specific features vary depending on the software, but Final Cut Pro, Premiere Pro, After Effects, Davinci Resolve, Media Composer, and Colorfront all feature some degree of direct frame.io integration, allowing you access to just about every feature without having to leave your NLE at all. 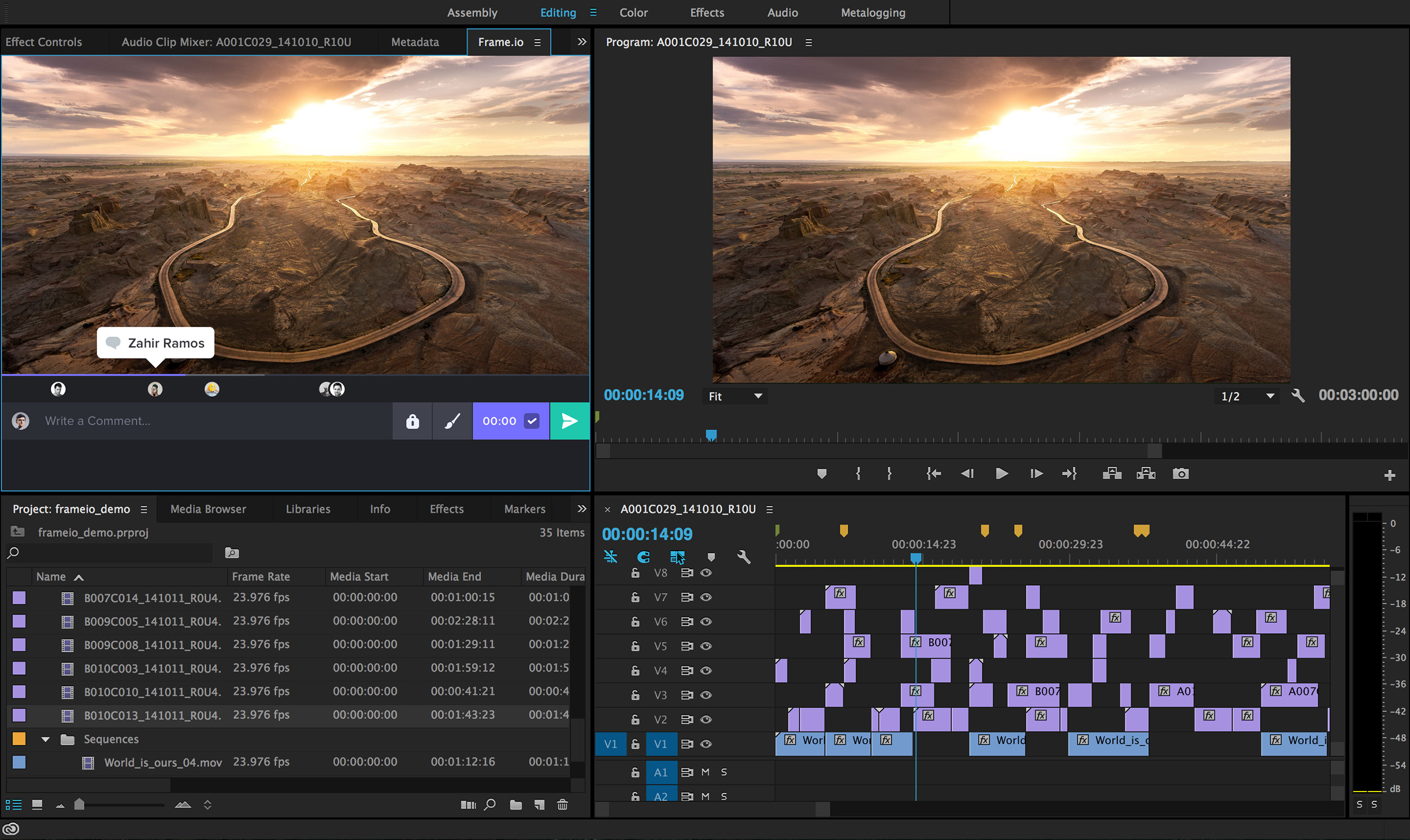 Personally, I have the most experience with Premiere Pro integration, and I’ve been consistently surprised by how seamless it is. Comments are automatically linked to your edit timeline and constantly refreshed, so new comments show up in real-time. Scrubbing can be linked, so clicking on a comment in the frame.io window will bring you to that same point in your edit on the Premiere Pro timeline. All in all, it’s absolutely the least difficult solution for edit notes that I’ve ever used, and it feels about 1,000 years beyond my previous experience of tracking all this stuff through e-mail threads.

And frame.io isn’t just for video. It supports still photos, audio, PDFs, and more. This is super helpful for either receiving notes on non-video content or just sharing media for a video project. For example, at Lensrentals, we use frame.io to edit our podcast episodes.

I tried to make this article more of a review than a praise-fest, but there’s really almost nothing I can think of that I feel is missing from frame.io. If I had to make one note, it’s that, while the application does support still photographs, it’s not really specifically designed for the picking and approval process the way something like Pixieset is. The ideal user is a video team who occasionally needs to incorporate stills, not a professional photographer who often needs to sift through hundreds of images. Still, though, it’s hard to fault frame.io for not being great at something it wasn’t really designed to do. Its strength is that it’s so specifically made for video review. 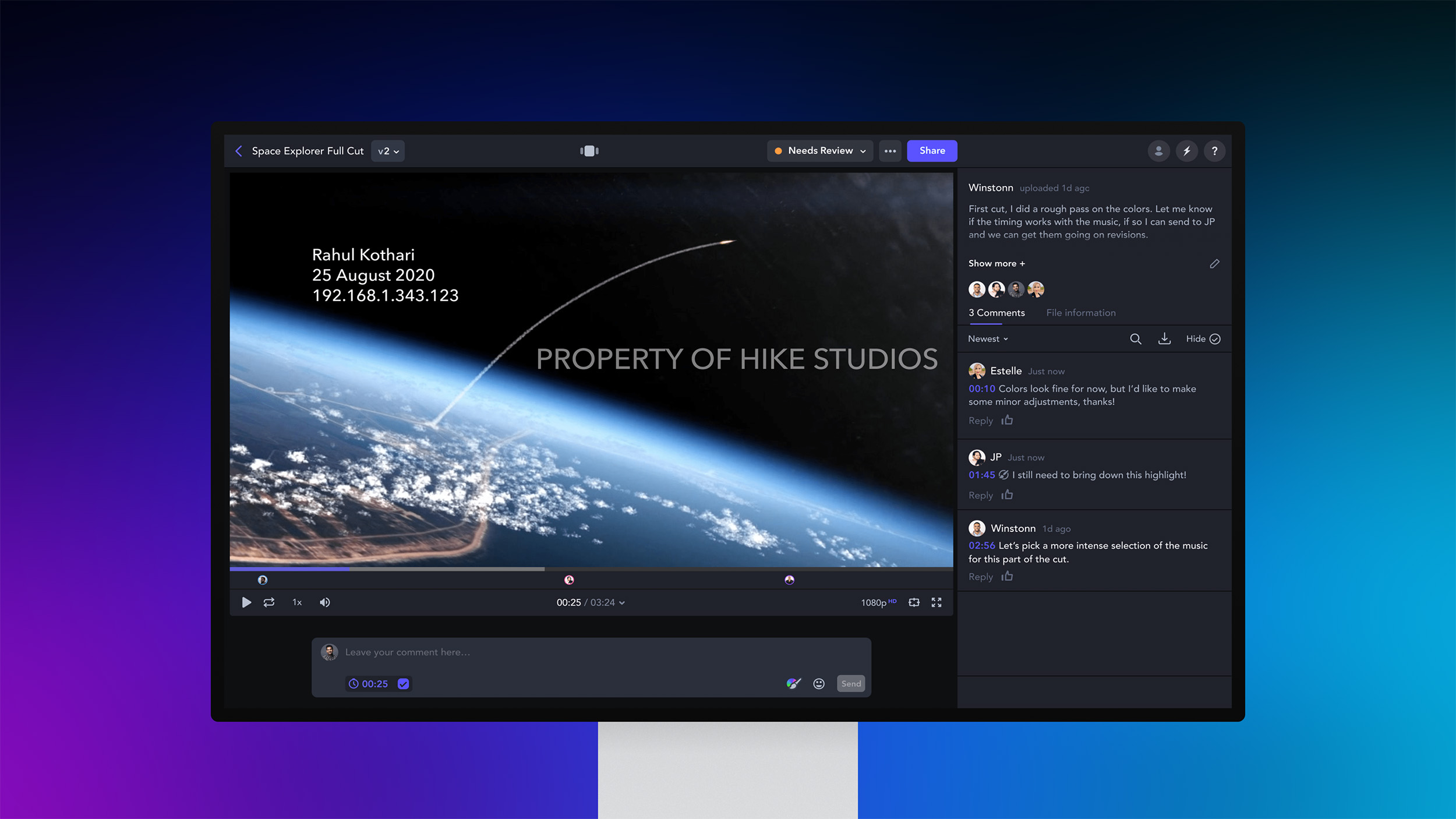 I didn’t have time to cover a ton of features here (frame guides, collaboration workflows, C2C, etc.), but suffice it to say, if more than one person is involved in your edit process, you could probably benefit from trying frame.io. There’s a relatively feature-rich free version that includes pretty much everything I covered here for up to 2 active users, (that’s people who can upload media to the account, viewers and commenters are unlimited), 2 projects, and 2GB of storage. That’s enough to get a good idea of what the service is all about, and might even be enough to coast on for a small business that doesn’t have to work on too many projects at a time.