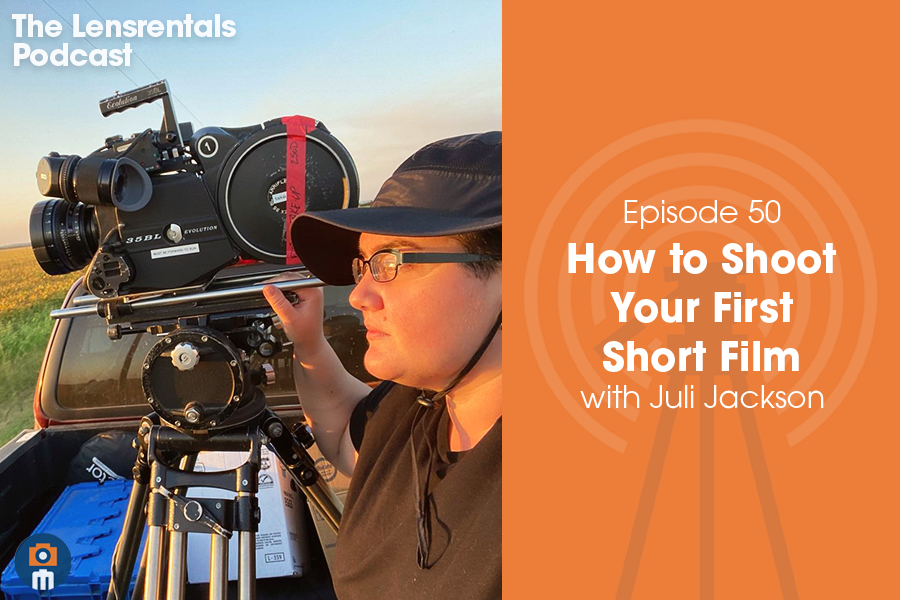 How to Shoot Your First Short Film with Juli Jackson

This week we’re talking with director, animator, and cinematographer Juli Jackson. Over the last 15 years, Juli has done everything from PA work to directing her own feature, 45RPM. Lensrentals.com’s own, Ryan worked as a camera assistant on Juli’s upcoming short film Delta this summer. They talk about what low-budget, small-crew filmmakers should keep in mind when shooting their own short films.

Listen as Ryan and Juli share stories on what it’s like to film your own short film, and as they give tips as to how to make an impact onset and ensure future work on upcoming productions. From building storyboards, micromanaging food, transportation and lodging, and even discussing the challenges of shooting on film, this episode gives you a great headstart on how to get going on your first short film production.

Find Juli on the internet:

0:50 – Ryan’s first time back on a set in a while was working with Juli on their upcoming short film, shot on film called Delta.

2:25 – Having a point person to take lunch orders, getting a call sheet every day, having a hotel room, and more are planning and prepping details that can make or break small budget film projects. Julie prioritizes making their crew feel taken care of and respected by paying attention to the details of the shoot. This preparation in turn helped when some things did inevitably deviate from the original plan.

5:15 – Juli finds that planning for food transportation, lodging, call sheets, and other basic operations are critical for directors to take care of in order to make sure that everyone is comfortable and feels taken care of.

6:30 – When Juli is working with film and things have to be precise, they want their people to be well-rested, and thinking clearly, which is a lot harder to do when they’ve slept on someone’s mom’s couch and had to scrounge for a granola bar for breakfast.

7:00 – Pre-production for Delta was mostly done in 2019 only to face delay after delay due to the pandemic. A relatable experience we know many filmmakers can empathize with by now.

9:15 – Keeping the crew small helped eliminate much of the risk of spreading the pandemic and was a top priority for Juli. Juli was hearing about many different kinds of experiences their peers were having as filming started to return, and the idea of putting anyone at unnecessary risk was not something that Juli felt right about.

11:20 – Juli and Ryan commiserate on how neither of their experiences in film school spent any time educating students on the practical preparations needed to shoot a project. They each feel that storyboarding, call sheets, crew organization and other day-to-day production details should be a part of the curriculum and not assumed knowledge.

14:10 – A useful takeaway got from grad school for Juli was learning how useful a floor plan and storyboards can be for communicating with the crew. As they said, “They don’t have to be works of art, they can literally be scribbles and that helps communicate with the crew.”

14:30 – Juli wishes film schools would integrate internship programs where students’ assignment for a class could be to go work on a set because that’s where the most learning happens. Through their own experiences and those of their students Juli has found that while low and no pay internships earn course credit, they aren’t curated in any meaningful way and often fall flat. Juli sees an unexplored opportunity where film schools could be adding much more value with on-the-job internships if schools and faculty found a way to work more closely to expose students to working on real productions.

19:30 – Advice for a beginner PA, AD, or camera assistant: Everyone talks about networking but what really needs to be done is build specific smaller communities. Don’t look at it only as a way to get your next job, but as a way to build a community of fellow filmmakers you trust and want to work with.

23:30 – How does Juli approach directing non-professional actors vs professionals? Casting the actor who embodies the character is a common theme in the performances Juli is looking for, regardless of if the actor is a professional.

24:50 – If there is an actor who likes to improvise and finds enjoyment in going off script, Juli advises to make sure they are playing opposite with someone who can roll with that. Juli likes to directly ask how the actors prefer to work so everyone is best prepared.

26:10 – Rehearsals, there is never enough rehearsing! Juli didn’t get to rehearse for Delta this summer. A nice surprise in that was Juli learned how to work with a range of actors who did well without rehearsing, and how to better support those who preferred it.

28:10 – Loving the look and some of the limitations of film, Juli shot Delta on 35mm film. Some of the downsides of shooting on film are the equipment is heavier and the director not being able to easily share their frame with the crew. Juli ran a Blackmagic Pocket Cinema Camera concurrently while shooting, which Ryan found very helpful and helped Juli with the digital dailies.

33:10 – Shooting Delta was Ryan’s first experience shooting on 35mm and he shares what it’s like to really feel the difference. It increased the pressure in a way he found really interesting and positive.

34:15 – At the risk of sounding “a little new-age” Juli says they find something a little more special about shooting film, “It is just definitely different from pushing record on a digital camera… and I like being connected to the machine capturing the image.”

35:35 – Juli is staying very busy editing Delta, and is finishing up a significant animation piece for it right now. Colorist, Kayla Watkins, excites Juli for having an eye for color and being dedicated to the ideas behind the project.