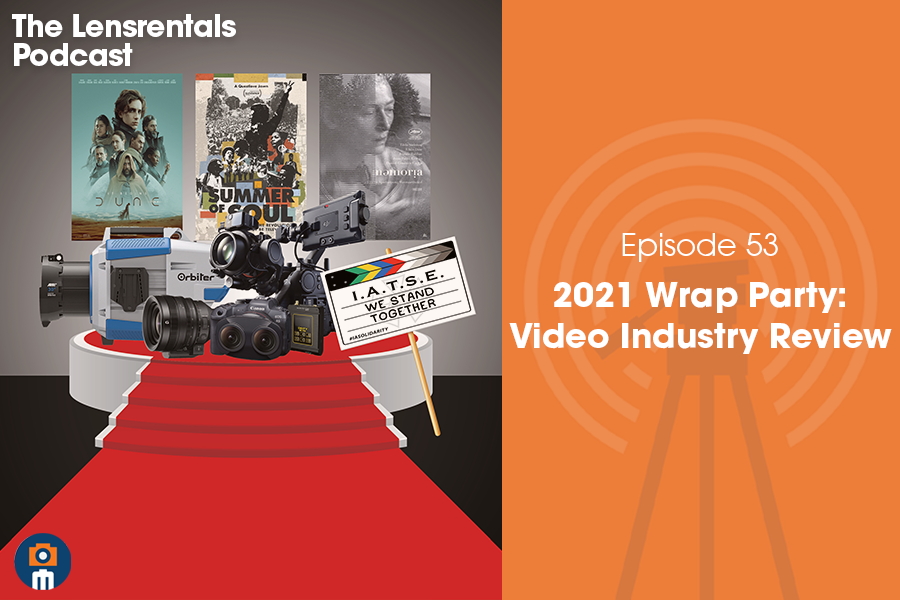 This week we’re wrapping up the year from a video perspective. Lensrentals Product Development Supervisor Ally Aycock Patterson and LensProToGo Video Producer Dom Boisvert join host Ryan Hill to discuss their favorite products of the year, the state of the industry today, and what each person hopes to see in the future.

In this episode, Ryan, Ally, and Dom discuss some of the biggest product releases this year for videographers, as well as discuss where they think the industry with continue to grow and develop, and what they’re looking forward to as they look into 2022. From the Nikon Z9, Canon R3, and even some talking points on VR now that Canon has entered the market with their 5.2mm VR lens, the crew covers a broad range of exciting new products in the video field.

1:45 – Question 1: What product made you the happiest in 2021? Not what was the most impressive or expensive, but genuinely made each of our panelists happy. For Dom, it’s the Sony FE C 16-35mm T/3.1 G and all of its nerdy sounds and smooth zooming. Find out more in the video he recently made about this lens.

4:40 – The product sparking joy for Ally is the Deity Deluxe 2-Person Wireless Omni Lavalier Mic System, which thanks to an agreement with Zaxcom, each BP-TRX can record backup audio for peace of mind during one-take events while transmitting at the same time. Despite the interface being a bit clunky with the tech from Zaxcom and input from Aputure’s audio division, this is a really capable product.

6:50 – Ryan is unable to claim the Tentacle Sync E Timecode Generator as his favorite product for this year because he did last year. Forced to move on, this year it’s the ARRI Orbiter LED Light. A fan of it being multiple lights in one, he wants more people to rent this so we can justify buying all the accessories for it, which really complete it in all the cool things it can do. As Dom says, “The ARRI Orbiter is like, the god-mode of lights.”

11:30 – Question 2: What upcoming product releases are you excited about for next year? For Ally, it’s ARRI’s Signature Zoom line work-wise, and for her personally, the DJI Ronin 4D. We’re all hoping the XD works with the Inspire 3, and the whole 4D concept. It’s like a beefed-up version of the DJI Osmo, but for two hands which gives the operator better balancing of the Z-axis. And that normally isn’t accounted for in a traditional two-handed gimbal.

14:20 – Dom is excited about the upcoming mirrorless flagships, the Canon EOS R3 and the Nikon Z 9.

17:20 – Ryan is excited to try the Canon EOS R5’s VR software with the 5.2mm dual fisheye lens. Ally wants to see how the paid subscription model goes and hopes that there is an accessible option for everyone, paid and non-subscribers. Ryan speculates that users will be able to bring their footage directly into Premier… effectively avoiding one subscription while paying for another.

19:50 – Ryan encourages any documentary filmmakers to check out the VR shorts put out by the New York Times such as this one onehttps://www.nytimes.com/spotlight/augmented-reality. They’ve sold him on the usefulness of VR. Sometimes VR can feel like “a weird parlor trick” he says, but in the right hands it’s proven to add real value to projects not only novelty.

20:15 – Question 3: How do you think the industry changed this year? Dom saw a pent-up demand to get back to shooting which has been manifesting as pros out of work reading up on new gear, new techniques, and learning and sharing remote workflows.

22:25 – Ally’s keen observation is that much of the tech that’s been used out of necessity over the past year and a half has shown us what works and now can now be made more sophisticated and elegant. “At some point, we stopped saying, ‘When do we go back to the old way?’ And we started saying, “When do we make this new tech reflect the production value that we are used to?”

24:35 – Question 4: How do you hope the industry changes in 2022? Both Ally and Ryan are on the same page as far as the shutdown of sets providing time and space to think through the ways things have always been done and how it’s long past time to make sure workers are not being taken for granted, put in harm’s way, and provided healthy breaks while working.

16:20 – The industry needs profound base-level changes that have nothing to do with a global pandemic. Many of the industry-wide expectations that previously felt built-in to the system got a considered second look during the pause in productions, and people seriously considered what they were allowing and promoting.

27:25 – Because being a PA sucks, and almost everyone on a film set is unionized except PA’s in larger markets Ryan’s wish for the future is a union for PA’s. Or at least for them to be allowed to join IATSE.

30:30 – Speaking as a consumer, Dom would like things to get out of the studio and on location. With every production looking to get back up, it’s a good time for it. He’s ready for some grunge instead of clean and crisp productions have gotten.

32:45 – Question 5: What was your favorite movie you saw this year? We have an eclectic mix on this one. For Ryan, it’s Memoria, because of the “weird release strategy”. It won’t stream anywhere ever, will only be shown in theaters, only ever in one theater at a time, and only ever for one week at a time. Dom’s favorite was Dune. Ally’s was Summer of Soul, because according to her as soon as she saw it was directed by Questlove, “I was like this could be about toenail fungus and I will watch it.” I believe that’s called a super fan.