Customer Story – How Philip Grossman Uncovers the Mysteries of Chernobyl 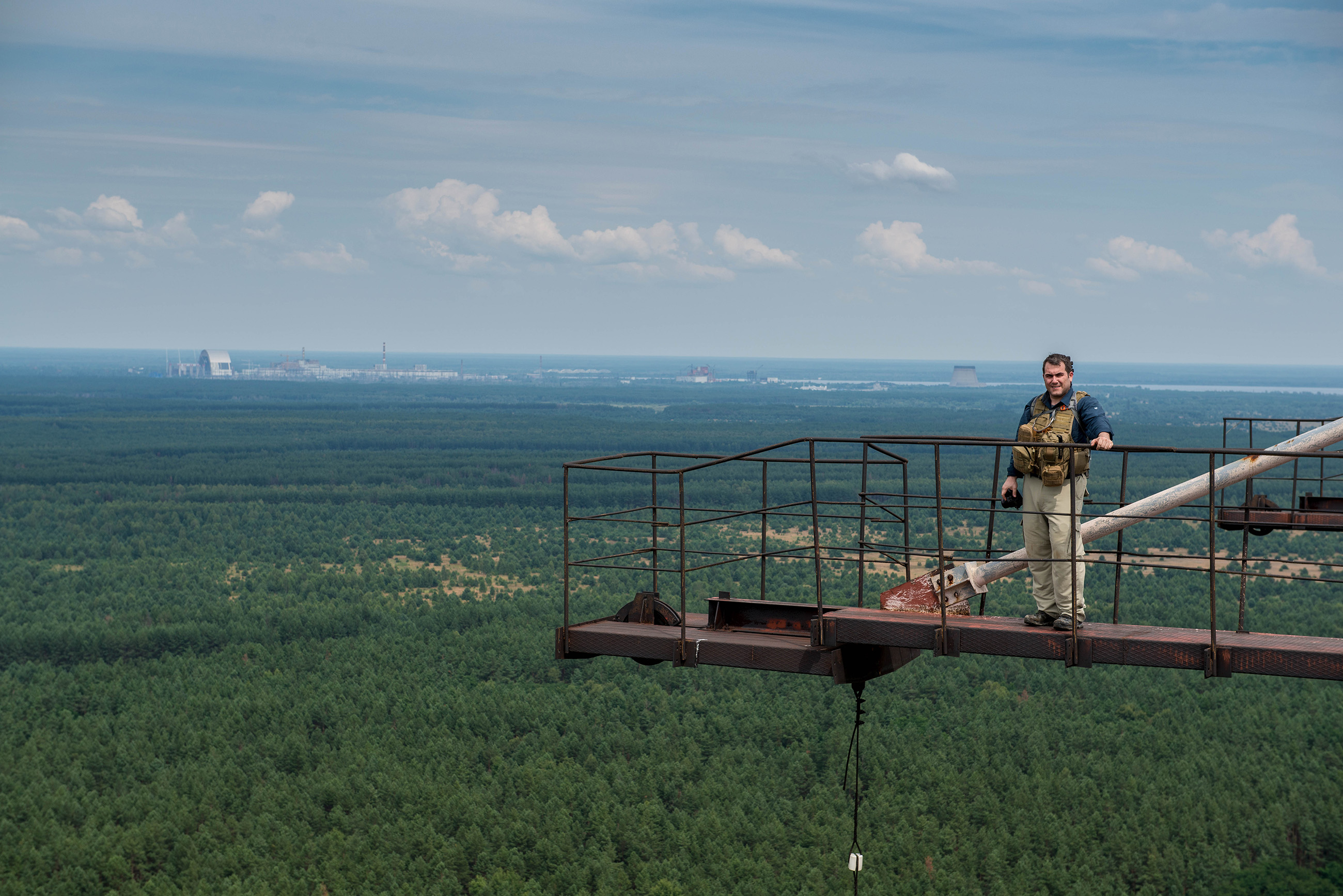 I’ve always had a fascination with abandoned buildings – and it’s actually how I got my start in photography. Sifting through old and abandoned warehouses and paper mills is a pretty common thing when growing up in the midwest, and always gave me an excuse to have a camera strapped to my neck, capturing all the twisted metal as it oxidizes away. And for those who find some intrigue in abandoned places, there is no bigger holy grail than that of Chernobyl in Ukraine. And there are few photographers and filmmakers who have as much experience in Chernobyl as who we’re highlighting today, Philip Grossman.

The history of Chernobyl is a fairly well-documented one at this point, documented in both fiction and nonfiction. HBO Mini-series like ‘Chernobyl’ took the world by storm just a couple of years ago, and documentaries like ‘Uranium Twisting the Dragons Tail‘ on PBS and ‘Mysteries of the Abandoned: Chernobyl’s Deadly Secrets‘ (hosted by Philip Grossman himself) on the Science Channel provide a wealth of information on what happened at Reactor 4, and what went wrong. But for those unacquainted, in 1986, a disaster occurred at the Chernobyl nuclear power station in the Ukraine region of the Soviet Union, marking the worst disaster in nuclear power history. On the early morning of April 26th, a test experiment taking place at reactor 4 of the Chernobyl power station unraveled, causing an explosion, fires, and radiation fallout that resulted in nearly 50,000 inhabitants of Pryp’yat being forced to evacuate their homes – homes that many would not see ever again. The result of the partial meltdown created a mystery about what happened, several coverups, and the largest radioactive area on Planet Earth. Mysteries that our guest has set to help uncover…

Philip Grossman is a photographer, filmmaker, civil engineer, and someone who has a huge fascination (and plenty of experience) with the Chernobyl nuclear power station. With 14 different Chernobyl trips under his belt, Philip has become one of the most renowned and experienced experts when it comes to exploring the abandoned region, leading to his work on Discovery Science Channel’s “Mysteries of the Abandoned: Chernobyl’s Deadly Secrets ” and his involvement in HBO’s Chernobyl. He’s also a long-time renter at Lensrentals.com, which lead to our paths crossing for an interview.

Though Philip Grossman‘s start in photography didn’t begin with photos of Chernobyl, but through his family’s appreciation for art in general – and his experience at summer camp. “I started photography in summer camp when I was eight years old; when we went away to a four-week sleepaway camp. I think I had a black and white 110; like a brownie camera – and that’s sort of where I got hooked on it. Of course in my family, my great grandfather took home movies. So we’ve been slowly transferring about 20,000 ft of 8mm film from the 1930s up through the 1950s and 60s into digital.” Philip tells us. “So I love photography. And then I got my first SLR from my uncle when I was 13. A Rico KR5 Super – that I still have – and it has mainly been a hobby for the most part.” Eventually though, about 20 years ago, Philip started making money at his photography, shooting small weddings and events – and it’s where his interest in cinematography became a new hobby. Through photographing Chernobyl, his interest in cinematography became even more clear.

Philip’s interest in Chernobyl came through his work as an engineer. Working as a ‘Due Diligence Property Condition Evaluator’, Philip found himself in buildings, some abandoned, some not, figuring out what’s wrong with them from an engineering standpoint. Combining his skills in this field, along with his interest in photography, you might be able to connect the dots so to where his interest in Chernobyl came to be. “It was really my midlife crisis – Chernobyl. Cause I went [for the first time] when I turned 40.” Philip explains.

After a respected mentor at his work retired, Philip found himself asking if this is what he wanted to do for the rest of his life. But it wasn’t until his wife, Elizabeth encouraged him to take a year off, and focus on his photography that Philip knew he wanted to look further into visiting Chernobyl. When looking through his family lineage, Philip found that his family heritage was from Ukraine originally, pairing with his studies of nuclear power in college, Philip began planning his first trip to Chernobyl.

But getting into Chernobyl is another story entire – you can’t just walk through the front gate of one of the most radioactive places on the planet. “I jokingly say I met some dude on the Internet – that’s actually how I did it,” Philip explains. “There was about an 18-month period between 2009 and 2011, where there are public tours. And so I reached out to a company and met my now friend my friend Arik. I sent him an email saying ‘I saw that you’ve been there, I’ve got one day, what should I focus on?’ He explains that one day is not enough, you need more time and he says, ‘You know every once in a while when I go, I take professional photographers with me.’ So I sent in my work and said he had one spot left in November, and told me to wire him $500”. And wiring $500 to a stranger on the internet is by most accounts, a bad play, but this time, it worked out, and Philip was able to plan his trip to Chernobyl in November of 2010.

After his first trip was a success (and were able to gain access into the control room of reactor 4 thanks to some local officials), Philip, with the help of Arik, started planning their next several trips. His continued trips (14 in total, at the time of writing this) have led to Philip becoming one of the more experienced in visiting and documenting Chernobyl.

Chernobyl’s disaster is still to this day, shrouded in plenty of confusion and mystery, and with several Hollywood depictions of the disaster, Philip explains that that is a key reminder of the event. “The biggest misconception is that the Soviets didn’t care about their citizens. No…these people had families and homes, and they weren’t going to do anything to hurt their families on purpose.” Philip somberly explains. “The accident itself is a multi-varied analysis of what went wrong – it’s not one single thing that lead to the accident.”

While Chernobyl is a highly radioactive place, Chernobyl is open for public visits. The Ukraine government deemed the area safe to visit in 2011 and has been letting select people into the area ever since – though, with current Russian tensions, it certainly isn’t recommended to visit right now.

Philip Grossman‘s relationship with Lensrentals.com is a long one – being a customer since 2009. And as such, some of our gear has made it into Chernobyl with Philip and his associates. As for what gear Philip uses to document his stuff, he’s currently shooting most of his work with the Canon R5, along with the Canon 16-35mm f/2.8 III, Canon 24-70mm f/2.8L II, and Canon 70-200mm f/2.8L III. “If I had to come down to a single lens, I’d say the Canon 16-35mm f/28L III – that’s my favorite lens.” Philip tells us. His preference for zoom lenses (particularly, fast zoom lenses) is a practical one – he’s walking into a lot of new places, and sometimes when shooting in tighter areas of Chernobyl, “zooming with your feet” isn’t a dependable style, especially when you’re around items emitting radiation. When it comes to video, Philip uses a large array of cameras, from GoPros, to Sony FS7s, to RED DCSM2 Heliums and DJI drones – RED actually named a Komodo color after Philip – a now staple in his camera kit.

But still, lighting can be an issue when exploring the dark underbelly of the Chernobyl power plant, so for lighting, Philip uses Acebeam X80T lights – a soda can-sized ‘flashlight’ capable of producing 32,500 lumens. For those who are unsure what 32,500 lumens means, it means it’s outrageously bright. Mounted to the side of his camera, the Acebeam X80Ts allow Philip to light entire scenes in the darks of areas while still being incredibly mobile.

When talking about future tech and what Philip is looking forward to in the future, his response was very practical in nature. “One thing is NVMe hard drives that are finally coming in larger sizes. Eight terabyte drives are pretty much the minimum I’m gonna use because I’m not wanting to take several drives to backup. When I travel, I take two of everything just because I’m used to a fear – leaving Ukraine, I’d give one set of drives to my partner who was driving back to Poland, and I would fly in case X-ray machine or confiscation or something.” Philip explains. Secondly, Philip looks forward to someday seeing an update to the RED Komodo and other RED systems that would make his life even easier.

As the world opens back up, Philip hopes to visit Chernobyl again soon. As that happens, we continue to look forward to what Philip Grossman creates on his next visit, and always appreciate his business in rentals. Do you have any questions about Chernobyl and Philip’s experiences there? Feel free to chime in in the comments below, and be sure to follow more of Philip’s work on his website, and his Instagram.

I’m Zach and I’m the editor and a frequent writer here at Lensrentals.com. I’m also a commercial beauty photographer in Los Angeles, CA, and offer educational workshops on photography and lighting all over North America.
Twitter Facebook
Tweet
Posted in Customer Stories
The Best Budget Lenses for Mirrorless Cameras for 2022
Why Manufacturers Make a Specific Camera Lens