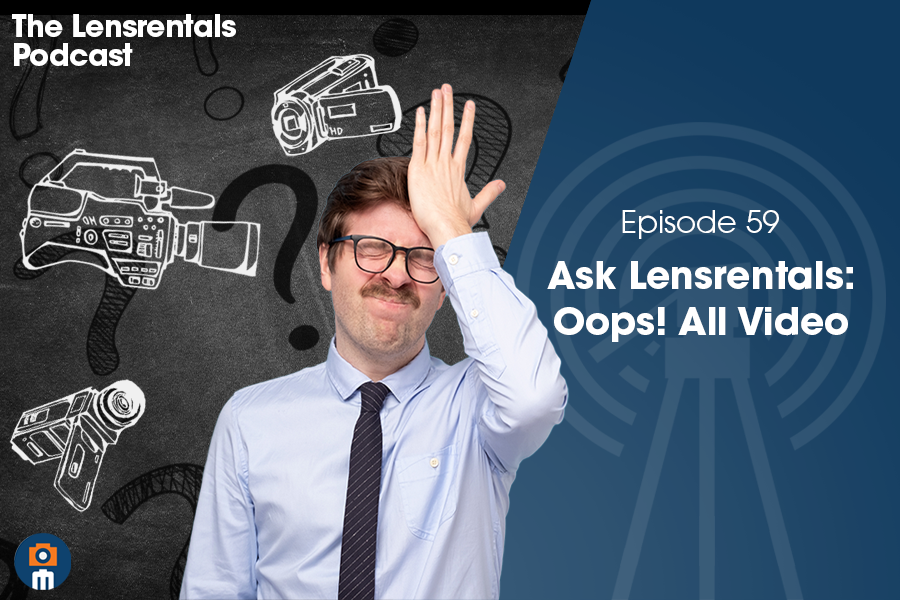 Much like the ongoing production error at the Captain Crunch factory, causing them to overproduce berries, this episode is entitled ‘Oops! All Video’. Enjoy as video experts Ryan, Ally, and Dom sit down and answer all of your video-centric questions, from the importance of reliable memory, to whether you should even bother shooting in video RAW.

Are you looking into buying a camera for video, or just wanted a camera that does both still and video well? Do you have some questions regarding your first day on a video set? Well then, this is the podcast for you, where all these questions and more are tackled by our video experts.

0:25 – Ryan welcomes Ally and Dom. This week’s episode is all video-related listener questions
1:20 – First question: why is the cost of memory rental so high?
2:00 – Ally notes that memory is one of the most important pieces of gear on any shoot, so it’s probably not worth skimping on a brand name. Better to just shoot formats and resolutions that are available on cheaper media like SD cards.
5:00 – Economy of scale means that any popular media format will eventually get cheaper as it’s adopted more widely.
5:30 – Second question: When should I switch from a hybrid photo/video camera like the A7S III to a dedicated video camera like the FX6, and what are the benefits of switching.
6:00 – Ryan recommends switching as soon as you start recording audio in any serious way.
6:30 – Dedicated video cameras are going to be much more easily compatible with accessories such as microphones and monitors.
7:15 – Ally thinks an underrated benefit of switching to a dedicated video camera is more physical buttons and better support for user customization.
10:45 – Third question: As a beginner videographer, I’m confused about exactly what RAW means and when I should use it. When is it worth it to shoot RAW?
11:45 – Ryan notes that the idea of not shooting RAW, of allowing compression of your footage, might be anathema to people coming from the world of photo where RAW is the default. In the case of video, though, compressed video is far easier to work with and in most cases, no useful data is lost.
13:00 – This is a complicated and worthwhile discussion, but our basic recommendation is this: if you’re not color correcting at all or doing your own basic color correction, compressed video like 10-bit 4:2:2 is probably your best bet. If you’re hiring a professional colorist or doing serious VFX work, then it’s time to think about shooting RAW.
16:00 – Break
17:00 – Fourth question: can you explain dual gain sensors? What are the benefits and are there any downsides?
17:45 – The first thing we have to clarify is that dual gain sensors and dual native ISO sensors are two different technologies. These terms are often used interchangeably, but there are important differences between the two.
18:25 – Dom explains what a dual native ISO sensor is. This is basically a sensor with two separate amplifiers per photosite, meaning the camera can, on-demand, raise its base sensitivity to light. Those two amplifiers effectively give the camera two “native” ISO levels where the sensor performs best in terms of noise and dynamic range.
23:00 – Ally explains some situations in which a dual native ISO can be especially helpful, mainly documentary-style work where the team might not have complete control over lighting conditions.
25:00 – Ryan explains what a dual gain sensor is. This is a sensor on which every image is processed at two separate gain levels, one that prioritizes highlights and one that prioritizes shadows, similar to the process of capturing HDR images with a still camera. These two gain outputs are then combined by the camera processor into a single final image with an extremely wide dynamic range. This differs from dual native ISO in that it’s an automated background process, not the user needs to make.
27:05 – Last question: what do I need to know before my first day on a professional set?
27:20 – The most important piece of advice is to make sure you get and read the call sheet.
28:45 – Something Ryan wishes someone would’ve told him ahead of his first job was that it’s very important to know your job and only do that job. Coming from a student or independent productions, you may be used to wearing a lot of hats and helping out wherever you’re needed. On a professional union set, though, it’ll be a problem if you, as a production assistant, move a light stand or touch a cable, even if you’re just trying to help. Let the appropriate departments do what they’re there to do.
30:40 – The other side of that coin is that, while you shouldn’t do anything that isn’t asked of you, you should be immediately ready to do anything that is asked of you. Have pens, tape, etc. on hand so you’re ready to spring into action as soon as a task comes up.
34:50 – Thanks for listening! On the next episode of The Lensrentals Podcast we’ll be answering photo listener questions.