Imatest Macro Results (With Apologies to the Nikon 105 VR Micro)

A few months back we tested a number of Nikon lenses on the D800 cameras, hoping to determine which lenses could bring the absolute best resolution out of that camera’s 36-megapixel sensor.

The results were interesting, and in a few cases surprising. More than a few Fanboys went ballistic over minutia, which is always entertaining. But there was one result that truly puzzled me: The Nikon 105 f/2.8 VR Micro lens appeared average. 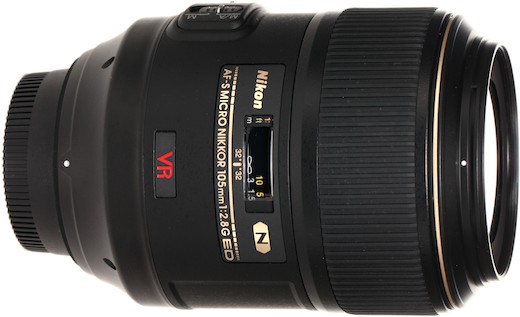 I have shot with the lens a lot. It was excellent on the D3x. I shot it on the D800 and it appeared to be an excellent Macro lens. The real world didn’t seem to agree with the Imatest results.

I thought at the time the reason for this oddity was that despite having a wide range of Imatest charts in various sizes, we were testing the 105 VR at a distance of 18 feet, which isn’t a great way to decide how good of a macro lens it might be. We know, for example, that some lenses are sharper at middle range than infinity, and vice-versa.

I emailed Norman and Henry Koren at Imatest and it turned out I wasn’t the only one with such concerns.

Imatest had produced a small chart just for Macro testing. In theory it would allow testing to 1:1 macro distances. We purchased one immediately and spent a couple of weeks developing a setup for it. The chart is printed on photographic film so it must be backlit, which took some trial and error. The resolution at which the chart is printed also becomes a factor when shooting macro with high resolution cameras and lenses.

Eventually we found a very reproducible and easy-to-use setup with the chart mounted to a Porta-Trace diffused LED light panel. This setup gives consistent and reproducible results. The chart resolution prevents accurate 1:1 macro testing, which I really had hoped to do (however, I am working on something involving laser-etched glass reticules from a lens-test projector that just might.)

But at 1:5 ratios the chart is definitely not a limiting factor. This gives us a working distance of a few inches, rather than 18 feet, which is hugely more appropriate for testing macro lenses. 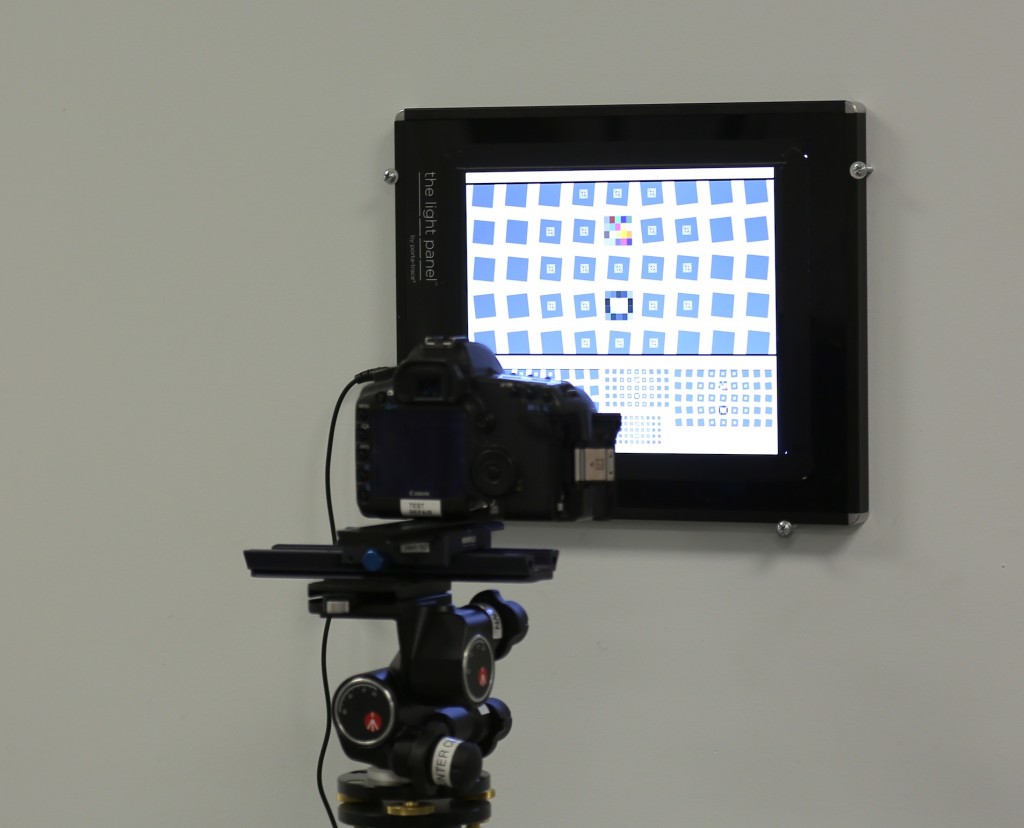 Does It Make a Difference?

When shot at a standard Imatest distance (18 feet our case) the average resolution of the lens at f/2.8 in Line Pairs / Image height is 875 in the center and 760 averaged over the entire lens. Shot at 1:5 Macro distances the resolution increased to 1070 / 965. It’s not shocking–a macro lens performs a bit better at a macro distance.

Of course, one of the first priorities was to take a look at the aforementioned Nikon 105mm  f/2.8 VR.

Wide open at our 18-foot testing distance it resolves at 900 in the center and 735 average. Tested at macro distances the resolution jumps to 1025 / 940.  (These numbers are slightly different than the ones listed in the D800 Lens Selection article because there we tested at narrower apertures, which give slightly higher results.)

Stopped down (as in the D800 article) it increases to a maximum of 1050 / 990 at f/5.6.  The 105 VR, which tested only slightly above average at longer shooting distances, is truly spectacular at macro distances.

We had a new lens, the Sigma 180mm OS Macro, arrive today so we used it for a third example. Tested at our usual distance (over 25 feet) it was a  good performer with numbers of 840 lp/ih in the center and 730 average. Tested at 1:5 macro distances it performed much better, resolving 960/835.

A Few Other Examples

Since we had the setup completed, and since Aaron and I already knew we were going to be in trouble for not doing the testing and repairs we were supposed to be doing, we went ahead and ran a few more lenses through at macro distances.

We had one surprise–a new Lensrentals resolution champion was crowned. One lens, eclipsed out, resolved anything else we have ever tested.

Canon is up first (all results at widest aperture):

Nikon is next (all results wide open, which is f/4 for the Coastal Optics f/4 APO Macro): 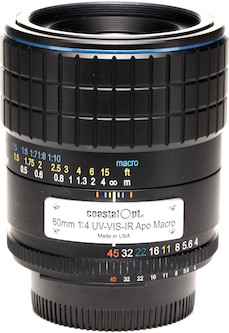 For those of you who don’t know, the Coastal Optics APO Macro is a $4500 lens with five calcium fluoride elements  and 12-layer coatings that is used for critical forensic imaging, like photographing the Dead Sea Scrolls in infrared or the stuff they pretend to do on NCIS.

Now we’d better get back to doing our real jobs before someone comes back in the lab looking for us.