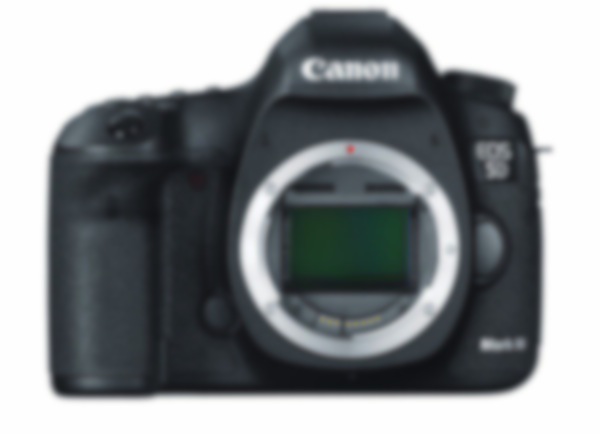 Sometimes I get to write cool, new stuff. Sometimes there’s just grunt work to be done, usually of my own making. This is one of those times.

To bring you up to date if you’ve landed here first, this is how I got here. Autofocus Reality Part 1 showed that on center-point, single-shot autofocus, standard phase detection was less accurate than  manual focus and LiveView contrast-detection AF. No surprise there.

Autofocus Reality Part 2 showed that two of Canon’s newer lenses, the 24mm f/2.8 IS USM and 28mm f/2.8 IS USM, seemed to have much more accurate phase-detection AF when shot on 5D Mark III bodies but not on 5D Mark II bodies. That was pretty surprising. To me at least.

That made the next step very obvious and not particularly fun.

We need to find out what other Canon lenses have the more accurate AF. If there are any, we’ll see if we can determine when this change occurred. Then we need to compare the other Canon bodies.

This post will simply compare Canon lenses (shot on the 5D Mk III) to see if we can find which ones autofocus more accurately.

Assuming what we’re seeing is real, I made the assumption that recently released lenses would be more likely to autofocus accurately. (I have a background in science. Meaning, until someone besides me reproduces this finding, it’s just a blip. Perhaps there are other explanations to what I found. Maybe the Imatest charts I use are just more accurate at 24mm or something.)

So I started testing the most recent releases and then worked backwards. That, I should point out, makes a big assumption.

My method assumes that the lenses are designed and developed in the order they are released. That’s probably not 100 percent accurate, particularly given Canon’s habit of announcing things about a generation before they actually appear on the street.

I set up the following lenses for testing on 5D Mk III cameras over several days, grouping them by year of release:

Previously I’ve been putting up graphs of the individual results. They’re pretty and all, but they take up a lot of space.

A quicker way to compare for this article will be to look at the standard deviation (SD), a measurement of how much the numbers vary. In all of the previous testing, LiveView AF groups with 10 test shots had SDs between 10 and 20, as did phase-detection autofocus on the Canon 24mm and 28mm f/2.8 IS lenses.

Phase-detection AF sample groups on all other lenses had SDs of well over 20, usually over 30. I added one older lens, the Canon 70-200 f/2.8L  NON IS, because I would be testing zooms for the first time and wanted a baseline. This is a rather blunt tool, so it is not going to be 100 percent accurate scientifically.

I’ll add that I don’t particularly have the time to perform (nor do I expect you have the inclination to read) a scientific statistical analysis of the data involved. I consider this just a screening test–I’m just looking to see if there might be something worth investigating further.

For brevity I’ll simply place the results in a table instead of showing a bunch of graphs.

The standard deviations are the average SD of (a minimum of) three separate runs of each lens for each type of focus. I have started off with some of the lenses from the previous AF posts and continued on to today’s results. I’ve listed the lenses by year of release, since I assumed more recent lenses were more likely to have improved AF.

At a glance if you look down the LV SD column, which is the standard deviation of the LiveView contrast-detection focus runs, you see the variation is pretty consistently in the teens for all of the lenses tested.

I didn’t show it in this graph, but the 28mm f/2.8 IS is also an accurate focusing lens. There’s a bit of a surprise in that the 70-300mm L appears to focus with the accurate group, while the 70-200mm f/2.8 IS is kind of on the border. Not in the teens certainly, but it’s the best of all the other lenses.

Both of these were released in 2010, and I’m not sure what this means.

It might be that the 70-300 seems more accurate because it’s being tested at f/4 rather than f/2.8, but we’ve tested other lenses at f/4 and they weren’t this accurate. The 70-200 f/2.8 IS L may be better than the major group of other lenses but not quite as good as the newer lenses. Or maybe not. Testing three copies probably isn’t sensitive enough to make that call. 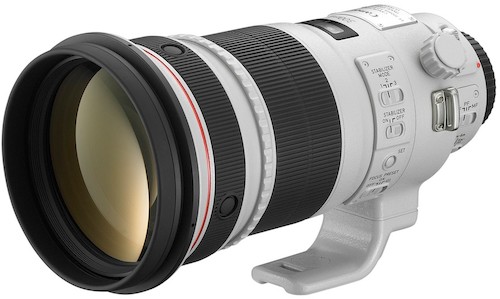 There was one last task to be done. The new Canon Supertelephoto II lenses are all recent releases: 2011 or 2012. They replace lenses designed in the 1990s, which were considered some of the best lenses Canon had made. So we have to check them.

We tested the 300mm f/2.8 IS II for a couple of reasons, but first among them was that our Imatest setup starts struggling at 400mm. I felt the 300mm should be representative of the group.

Because I felt supertelephotos were different lenses than the others we tested, we checked both the 300mm f/2.8 IS and IS II on both the Canon 5D Mk II and 5D Mk III.

As expected, neither lens proved to focus more accurately with the 5D II camera, so I won’t go into that further.

We will post graphs, like in the previous articles, of the results of a sample series (one copy of each lens on the same 5D III) as an illustration–they are pretty and all. But I repeated the tests with other copies and received the same results.

First is the 300mm f/2.8 IS. There was a bit of frontfocus (the difference in average between the two groups), which I could have helped fix with microfocus adjustment, but I didn’t have the time.

The standard deviation for manual focus was 20. For phase detection AF, it was 35. I’m not certain why there was difficulty with contrast-detection AF with this lens (most other lenses were in the teens as the table above shows), but it showed about the same number for all three copies tested. Clearly, though, phase detection AF was less accurate, as was the case with all other older designs. 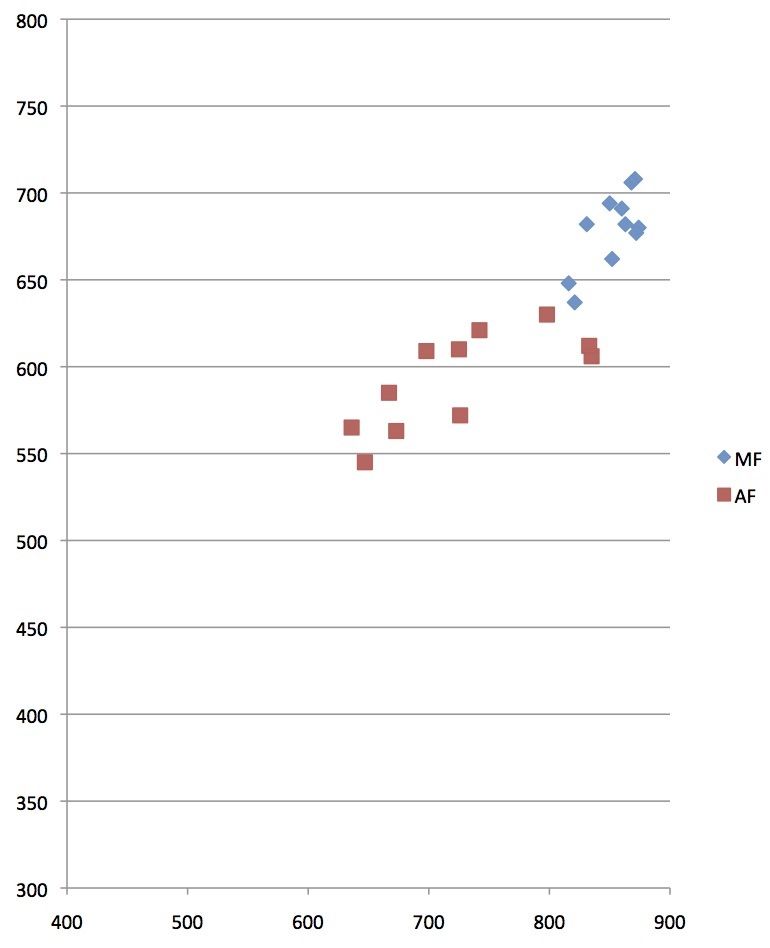 As an aside, in case you haven’t noticed, I had to change the scales of the resolution graph for the 300mm f/2.8 IS II. It’s an amazingly high resolution lens.

The older 300mm f/2.8 may look bad in comparison, but those numbers are very good. The original version is sharper, for example, than the 70-200 f/2.8 IS II. But the new version is amazingly good.

Well, we learned that on 5D Mk III bodies, the newest Canon lenses seem to autofocus more accurately, nearly as accurately as LiveView contrast-detection focus. And of course, standard phase-detection AF is much faster and more convenient than Live View.

Maybe the 70-200 f2.8 IS II is, but probably it isn’t. I’m not able to make the call since it seems to be somewhere in between the “best” group and the other lenses.

Next up, obviously, will be comparing with other Canon bodies.

I think we can safely assume the 1Dx will be at least as good as the 5D Mk III. We can also assume the 5D Mk II and previous cameras with the same AF system are not. It will be interesting to see where the 1D Mk IV, 1Ds Mk III and 7D fit in this picture.