For those who don’t visit often, this isn’t a lens review. It is simply my impression and the Imatest results for the first batch of Zeiss ZE 15mm f/2.8 lenses that we did before they got shipped out to our customers. Particularly with a very wide lens like this, Imatest results must be taken for what they are: the results of testing at about an 8 foot distance. The real-world results may be different when working at longer shooting distances.

I was a bit surprised about the size-to-weight ratio of the lens. It’s a fairly large lens, as you would expect for an f/2.8 ultra-wide lens. With the hood, it weights a substantial 29 ounces (820 grams) but really doesn’t feel as heavy as I would have expected just looking at it. 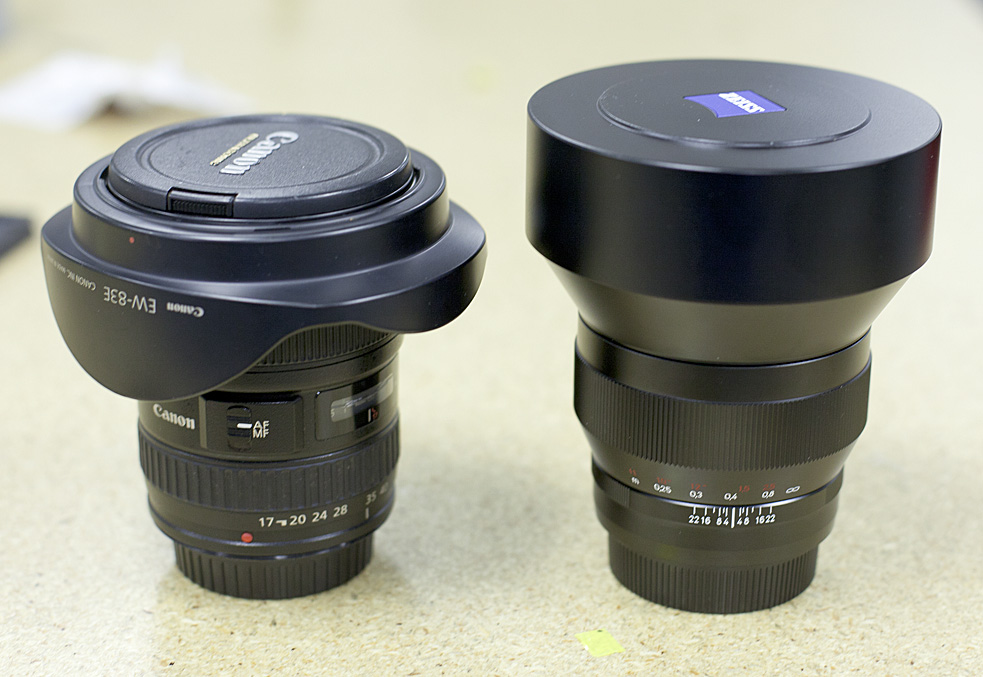 The built-in semi-petal hood is metal (feels like aluminum).

I’m not a fan of filters on ultra-wide lenses, but for those who are, well, there will be some issues. Especially considering it’s 95mm across this bad boy. I do like those nice, big metallic sides protecting the front element, though. The glass doesn’t look nearly as vulnerable as the Nikon 14-24 or Canon 17 T-SE glass does. On the downside the metal feels a bit thin and I can see the hood edges looking a bit battered on our rental lenses after a while.

Focus has the nice, smooth feel that all the Zeiss primes do, but the focus throw is a bit narrower, at perhaps 80 degrees from near to far. That’s appropriate given the focal length, though, even with fairly close work. (Which this can do, with a 10 inch minimum focusing distance.)

As I mentioned above, always take Imatest results on ultra-wide lenses with a grain of salt. Even with our largest chart we’re shooting this one at 8 feet distance. It’s not a good predictor of what the lens will be like at infinity. We were able to only test 2 copies before the packers came in force and requisitioned them, but they tested almost exactly the same on Canon 5D II test cameras.

Distortion isn’t bad for such a wide angle at 2.1% barrel. This is comparable to the Canon 14mm (2%) and lower than the Nikon 14-24 at 14mm (3.9%). Vignetting is quite noticeable at f/2.8. It’s not as bad as the Zeiss 18mm lens was, by any means, but appears a bit worse than the Canon or Nikon lenses at 14mm. Not a deal breaker, by any means. Like distortion it’s easy to fix in post. (On the other hand, fixing corners in post gives back some of that corner resolution we’re always wanting.)

This is a really, really good ultra-wide lens. It will be quite popular. If I already had a Canon 14mm or Nikon 14-24mm f/2.8, I don’t think I’d be standing in line for it like an iPhone 5 or anything. If I was in the market for a new high-quality ultra-wide I’d certainly be considering it. It’s clearly the best lens in the corners. Even people who don’t like to manually focus won’t have any problem with manual focus at this focal length.

But if I was a Nikon shooter, I’d have to give consideration to having not-quite-as-good, but still excellent image quality, being able to zoom 14-24, and having an extra $1,000 to spend on something else. For Canon shooters, the ZE makes a better argument at only $800 more than the Canon 14mm which doesn’t zoom well at all. But I like having an extra $800 as much as the next guy .  .  .  .

So either way I’d probably hold of a month or two and wait until enough early adopters had posted their images and comparisons before I took the plunge. Sure I would. OK, no I wouldn’t.  I shoot ultra-wide a lot and I’ll have to see for myself because I never believe what I read online anyway.

Tweet
Posted in Other
The Man Who (Almost) Never Succeeded
Politicians, Pork, and Photographers