The Most Interesting Photographer Ever Is…

My mind is a bad neighborhood – I shouldn’t be left alone there after dark. So the other night I’m driving home home and there’s a truck in front of one of my neighbor’s houses, for this carpet cleaning service, Stanley Steemer. A truly normal person probably wouldn’t notice. A mildly disturbed person might wonder “are they getting ready to sell their house?”

Me? I think, “Why don’t they spell STEAM correctly?” If you read my blog much, you know that spelling isn’t always my strong suit (if they have a typo Olympics, I’m going for gold), so I’m rather triumphant when I find someone else spells worse than I do. Since it was after dark, and no one was home but me, alone in the bad neighborhood that is my brain, I went online and did a little research.

As usual, that research ended up connecting me with a fascinating historical photographer that I had previously known nothing about. I promptly wasted about 8 days of my life reading a number of biographies. How did I get from a carpet cleaning company to the most interesting photographer I’ve ever found? Well, I’ll tell you.

The Stanleys, a farming family in Kingfield, Maine, added twin boys to their already large family in 1849. Officially named Francis Edgar and Freelan Oscar, the twins generally went by their initials: F.E. and F.O. The boys were both constant tinkerers. Freelan, for example, wanted a violin as a child, so he and Francis whittled the pieces out of wood and made their own violin. No one is sure how good the first one was, but the Stanleys sold hundreds of violins for many decades. A Stanley violin is today a rare collectors item, worth mega.

The twins both went to Farmington Normal Training School, expecting to become teachers. F.O. actually did, eventually becoming principal in Mechanic Falls, Maine. F.E., though, found teaching didn’t agree with him. He moved to Lewiston and began a career as a portrait photographer in 1874. F. E. was quite a success and had a busy studio. 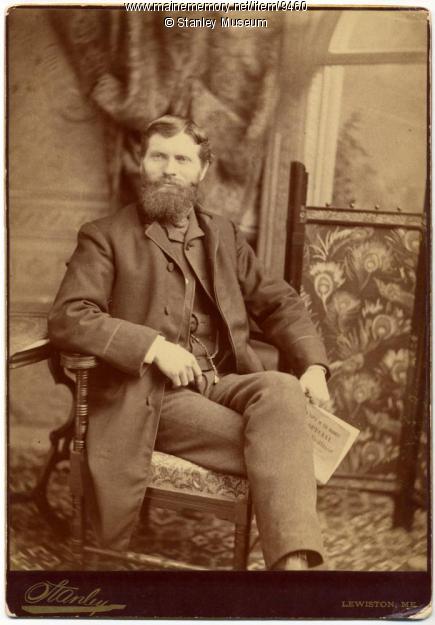 F. E. Stanley, self portrait at the Lewiston Studio. Courtesy the Stanley Museum

But for my boy F.E., just being an awesome portrait photographer wasn’t enough. He had to invent stuff, too. In 1876, he patented what is arguably the most important invention in photography since Daguerre invented the camera (6,324,413 models can’t be wrong). Without F.E., millions of soldiers would probably not have bothered taking their pin-ups to overseas, Hugh Heffner might have remained an Esquire copywriter forever, and millions of women would have had to wait until Photoshop was developed to feel inadequate about their looks.

That’s correct — F.E. invented the airbrush and developed techniques to airbrush his photographs. 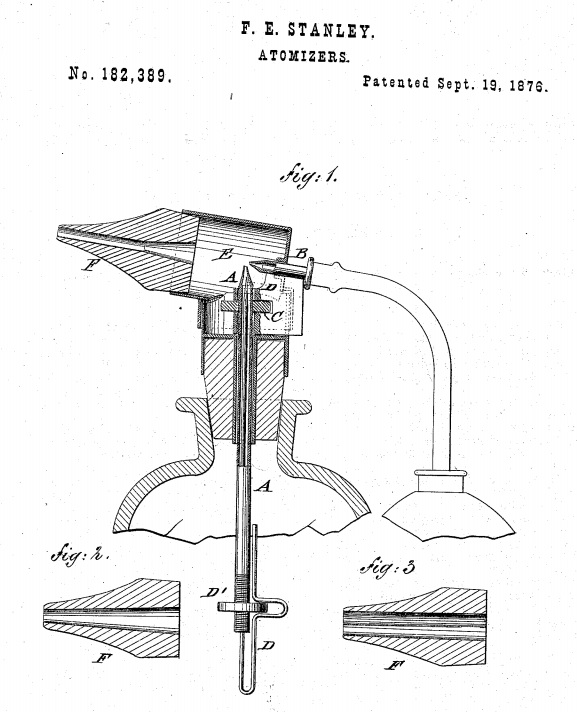 Of course, this was 1876, so he wasn’t so much brushing a little cellulite from his centerfold pictures. Rather, he was using it to colorize his black and white photographs.  That was enough to make him his first fortune, though, and fairly soon F.O. joined him in Lewiston and their studio grew into one of the largest in New England.

Most people, having invented the airbrush and created one of the largest photography – airbrush studios in New England, would probably rest on the laurels a bit, and let the cash roll in. But the Stanley boys just weren’t wired that way. They began to use the new dry plate photography techniques and decided, well, the dry plates being made just weren’t good enough.

Here they were, basically painting over their photographs with an airbrush, but they were worried about having the best quality film they could get. This is how I know these guys were really photographers. Who else would obsess about having the highest possible quality image before they began manipulating and distorting it until it lost all relationship with reality?

Anyway, being the Stanley Brothers, they began making their own dry plates. Then, in 1884 they patented a machine for coating mass-produced quantities of dry plates and relocated their newly incorporated Stanley Dry Plate Company to Watertown, Massachusetts. I guess since they were originally from Maine, this was like retiring to the Sunny South for them. By the 1890s they were selling nearly $1,000,000 worth of dry plates a year. Another decade, another fortune.

The Stanley brothers seem to get distracted easily. In the 1890s, if you were an inventive type seeking distraction, there was probably nothing calling to you louder than the new concept of the horseless carriage. F. E. became rather obsessed with the idea and began constructing his own horseless carriages as a hobby. Internal combustion engines were being used for most of these newfangled motorcars, but F. E. felt that good old reliable steam engines were a better idea.

By 1898, the Stanley Brothers were exhibiting the first Stanley Steamer automobile — and copyrighted the name Stanley Steamer. Which is probably why the carpet cleaning company has to spell steam s-t-e-e-m. They also decided to sell their dry plate business to rival firm Eastman Kodak, so the brothers made another fortune. 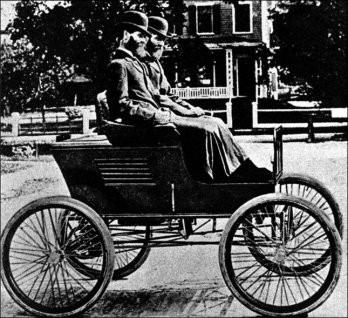 The Stanley Brothers in an early Steamer

If you’re like me, you may have assumed the Stanley Steamer was some crude locomotive-looking thing with 4 wheels. The first prototype may have been, but the Stanleys eventually developed steam engines weighing only 125 pounds or so, which were actually smaller than the internal combustion engines used on other horseless carriages.

Their cars also performed like nobody’s business. Their 1898 model had a top speed of 27 miles per hour (dangerously fast for the day). Steam engines have very high torque and the first Stanley Steamer could climb a 30-degree grade, something no other car of the time could do. Steamers were nearly noiseless (very different from internal combustion engines of the day), didn’t require a cooling system, had almost no exhaust, and were much more reliable than gasoline engines. 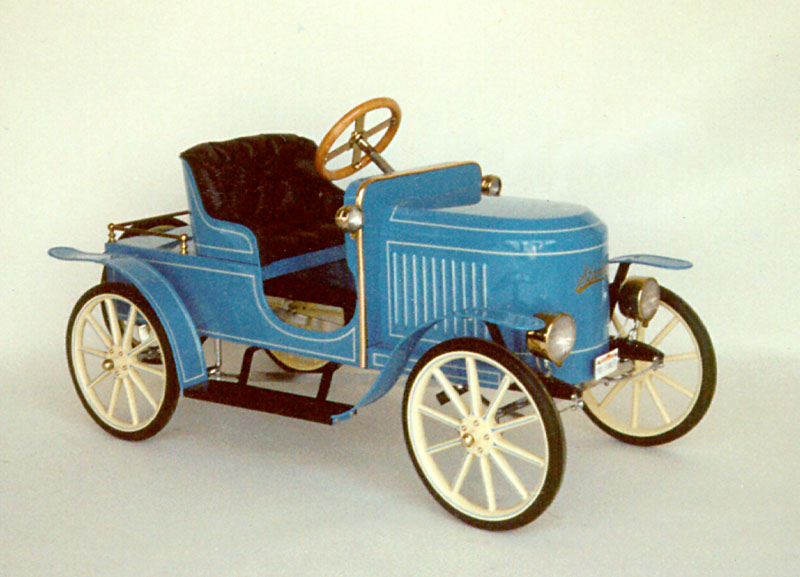 Stanley Steamers, at the turn of the century, were lapping the pack as far as automobiles went. The Stanley Steamer Rocket utilized aerodynamic principles way back in 1906. It set the land speed record of 127.7 miles per hour at Ormond Beach in 1906. In 1907, it briefly reached 150 miles per hour. Immediately afterwards, it went through an uneven patch of sand and became airborne.

To demonstrate just how far ahead of it’s time the Steamer was, during its 100 or so feet of airborne travel, it unofficially set the air speed record, too. Airplanes wouldn’t approach this speed for a decade. 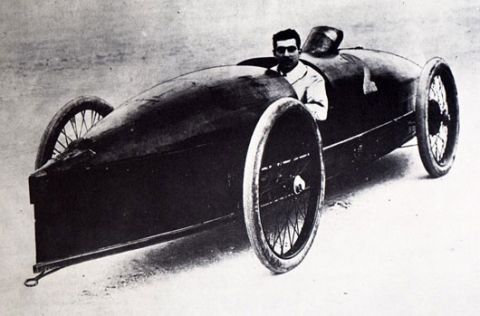 They Stanley brothers were not only great inventors; they were also good businessmen. In 1899, John B. Walker wanted to buy the Stanley Steamer Company. The brothers named an exorbitant price for a company with one working prototype car: $250,000. Walker paid it, as long as the brothers agreed to not compete with him for a year. By 1903, the brothers bought the company back for $20,000 and continued to make Stanley Steamers until the 1920s.

Oh, and One More Thing

F.E. Stanley died in 1918 when the Stanley Steamer he was driving slid off of a rain-slick road. F.O. Stanley contracted tuberculosis in 1903 and his doctors advocated he move west to high altitude, although they felt even then he would only live a few years.

F.O. loved a remote location called Estes Park, Colorado. At the time, Estes Park was considered largely inaccessible. F.O., though, had a Stanley Steamer, with its remarkable hill climbing ability, and he could reach Estes Park easily. He bought 140 acres there, and built a home for himself as well as a luxury hotel for guests and friends from the east coast. 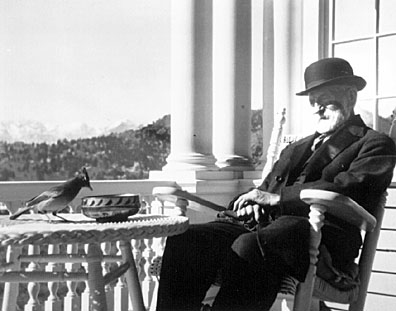 F. O. Stanley in his later years at Estes Park

For several years, the only way to reach the Stanley Hotel was by a fleet of 13 Stanley Steamer 13-person carriages. It was immensely popular, though, and remains so to this day. You have probably know the Stanley Hotel, by the way. Stephen King wrote The Shining after spending a night there, and it was the setting for the movie of the same name. 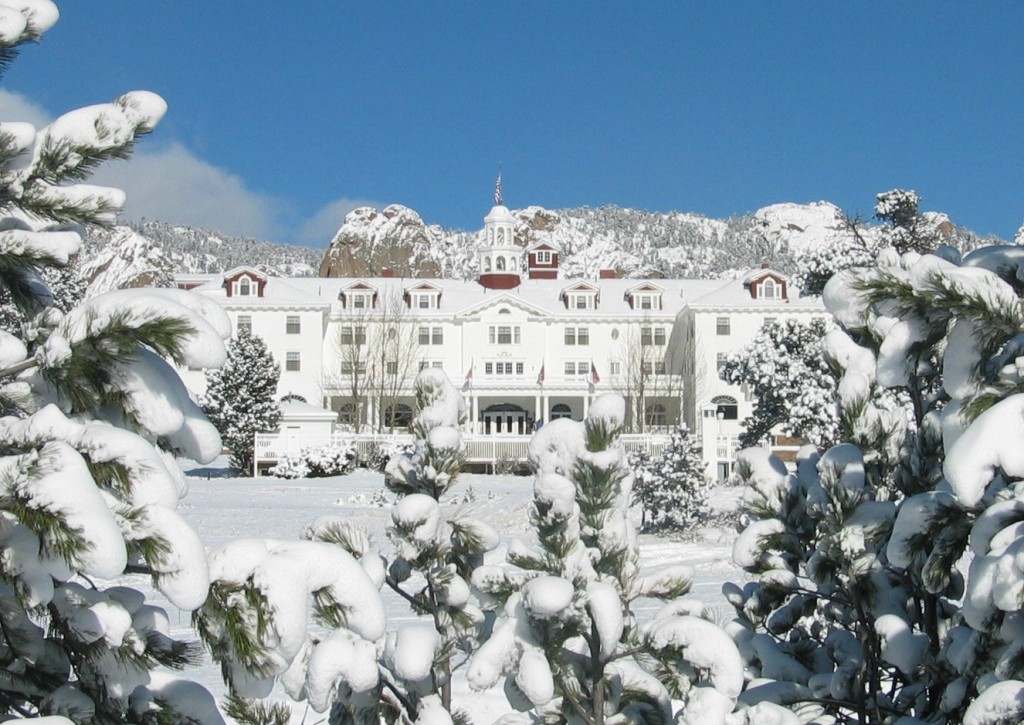