I hear this about 20 times a day and it’s true: “Yes, it has a lot of distortion, but that’s easy to correct in post.” It’s a totally true statement.

Unfortunately, way too often, the complete statement goes like this: “I got it because it has such high resolution. Yes, it has a lot of distortion, but that’s easy to correct in post.” That’s two totally true statements. But when combined, they become false.

Distortion correction is a wonderful tool. But every tool, whether in-camera or in your post-processing program, that modifies an image is a trade off of sorts. There is no way you can shift that many pixels around and not decrease resolution. I’ve said it dozens of times. Yesterday, unfortunately, someone asked me to tell him exactly how much resolution you actually lose?

Don’t you just hate it when someone interrupts your Rant of Absolute Knowledge by asking for facts? What a buzz kill. Now, if I were hanging out on a forum under my anonymous handle of LensGuruGod1 I could have used proper Internet etiquette and replied, “If you weren’t an awful photographer you’d already know that. I won’t waste my time with you anymore.”

Being that I was out there using my real name and all, the comment left me no choice. I had to go do some testing and gather some actual facts. I hate when that happens, especially when I’ve already spent two days playing with the Canon 24-70 f/4 IS and taking it apart. That has me a bit behind on my real job, so please excuse that this isn’t an exhaustive test of 30 different lenses. I do think, though, it’s a good example.

I used the Canon 24-105 f/4 IS for this test. It has a large amount of barrel distortion at 24mm (over 4%). I chose it simply because we already had Imatest set up at 24mm and because I feel our Imatest setup is a bit less accurate wider than 16mm. I mention this only as a preemptive strike because I’m 100% certain some Fanboy is going to be saying, “Roger said the Canon 24-105 has the worst barrel distortion of any lens.” It doesn’t, not by a long shot, but it has plenty for this test.

We usually run Imatest only on RAW files, but that would make it impossible to correct the image. So I took the RAW file to Photoshop, turned off every single sharpening and modifying tool and converted it to TIFF. Then I loaded the correction profiles for the Canon 5D Mk II and 24-105 and did an auto distortion correction, saving that as a TIFF.

Finally, I compared the corrected and uncorrected versions in Imatest. I’m presenting data from one lens here, but I did another for completeness. It was identical.

Below are the original and corrected shots. Photoshop does a really nice job of correcting the image. I measured the autocorrected version as carefully as I could and barrel distortion had been reduced from 4.2% to 0.5%. 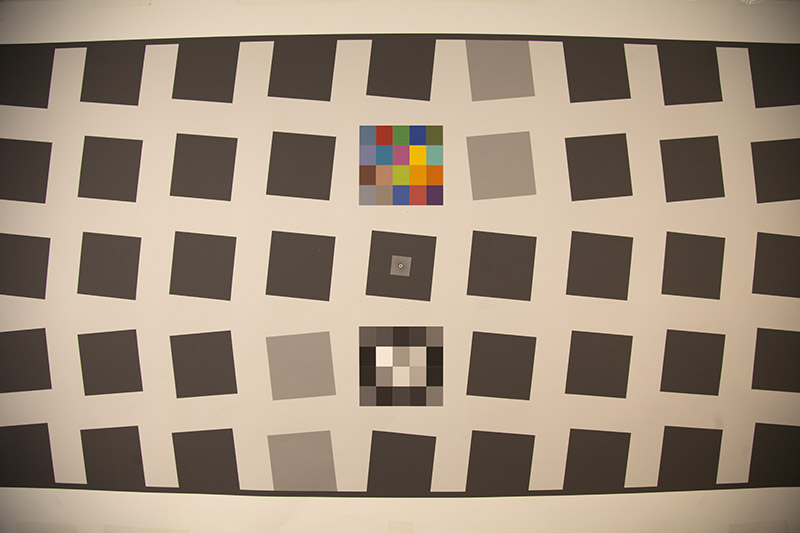 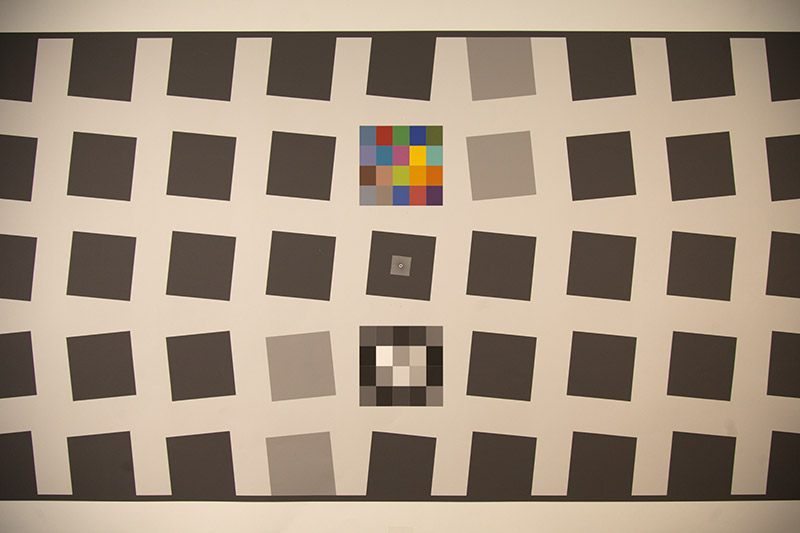 On top is the Imatest printout of the uncorrected image. Below is the corrected image. The numbers in the boxes are the MTF50 measured in Line Pairs / Image Height at each location. 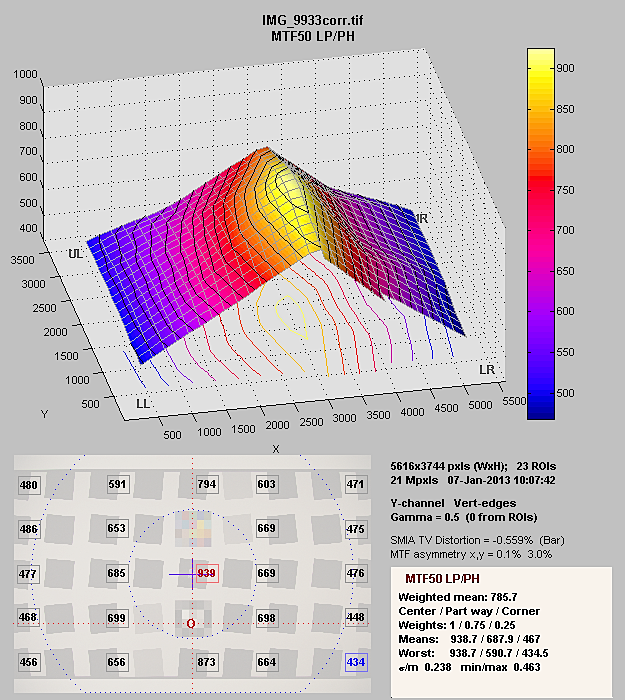 Since MTF20 probably is a more important measurement of resolution for small prints and online jpgs, this would probably correlate more with what most people would see in an image. Landscape photographers making large prints, though, would be interested in MTF50.

So What Does it Mean?

Not a lot for most people. Distortion correction generally improves the look of a photograph and a small sacrifice in resolution isn’t too important with today’s cameras and lenses, even in the corners.

But when someone wants to argue that they buy a lens with high distortion because it has higher resolution and distortion is easy to fix in post . . . well, it had better be a lot higher, or it’s a fool’s argument.

I’ll add one other note. It’s well known among lens designers (I’m not one, but I read their textbooks and journals) that when designing a lens correcting distortion often reduces resolution. In ancient times (i.e. film days) distortion correction was a first priority. After all, it’s really hard to stretch film to correct distortion. In current times, lens designers seem to be more willing to leave the distortion to get higher resolution.

I agree with that – I’d rather have the option of correcting or not correcting myself. But I think it’s important for photographers who ARE very interested in the best resolution to realize they’ll be giving some of that back when they correct in post. If two lenses have identical resolution in testing but one has more distortion, that one will have less resolution after the distortion is corrected.