When we optically tested the RokiBowYang tilt shift, I mentioned that my recommendation was tempered by wanting to see how it was built. Parts and repairs, at least in the U. S., are nonexistent and the price is a bit high for me to consider it a disposable, like the 14mm RokiBowYang. So first thing this morning, instead of doing the work we were supposed to be doing, Aaron and I dove into one.

My first concern was the plastic levers that are pushed to rotate the base and planes of tilt and shift. By the way – the forward lever isn’t broken – its base is built at an angle to keep it away from the shift rotation knob. Well done, Samyang engineer. 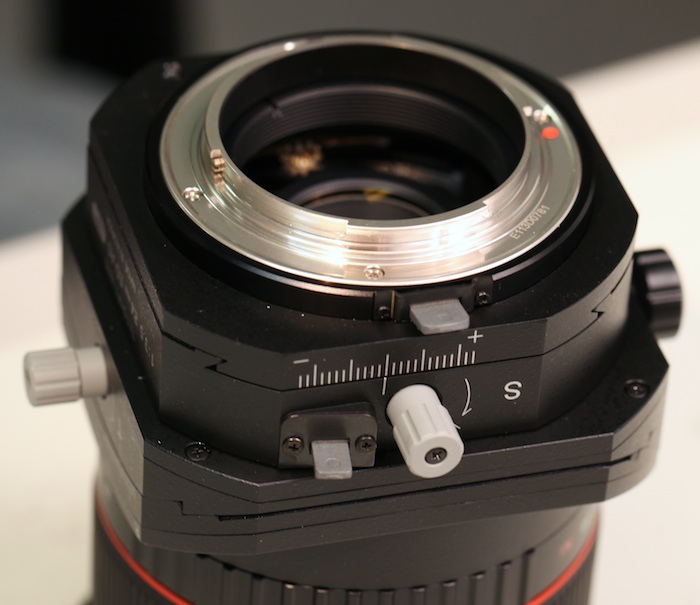 I removed the screws and plates over the levers, of course but I can’t get a decent photo inside. It’s dark in there. The plastic tabs slip over a metal tab that does the actual work inside. It’s effective and tight right now when the lenses are new. I honestly expect this will be a problem area as the lens gets used.

It would be no big deal if you could buy the plastic part; anyone could change it in about 30 seconds. But RokiBowYang parts aren’t available. If anyone from Rokinon reads this, here’s the one thing you could do to increase the popularity of this lens long-term. Sell the plastic parts. You don’t have to open up a parts department: just put all the plastic knobs and levers in a plastic baggie, call it a ‘refurb kit’ and sell it at B&H. 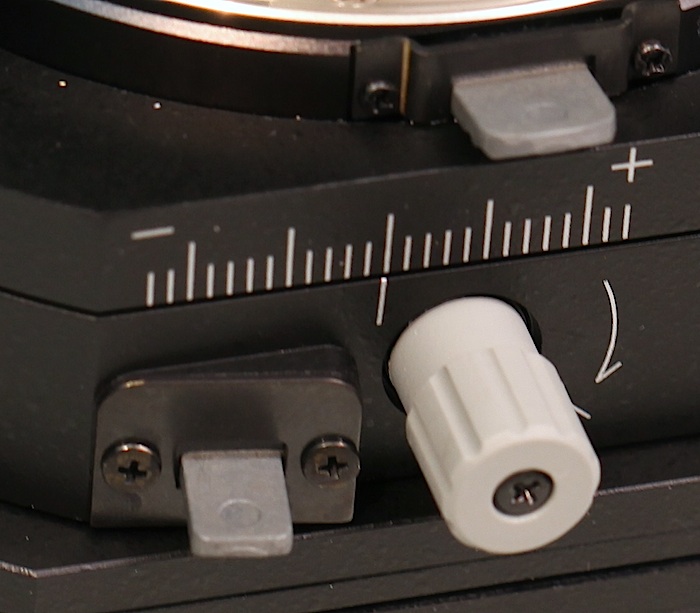 Opening up the Base

We’ll start by removing the 4 screws that hold the shift mechanism to the tilt mechanism. I should mention that the lens is made out of very high grade plastic that is quite thick and solid.  I have no reservations about these parts. It’s similar to the material the new Canon 24-70 f/2.8 II lens is made of. 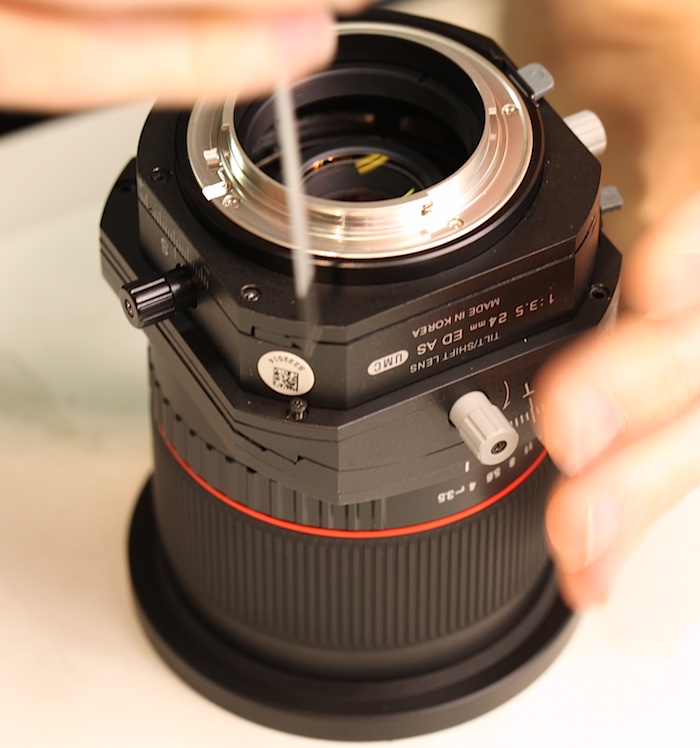 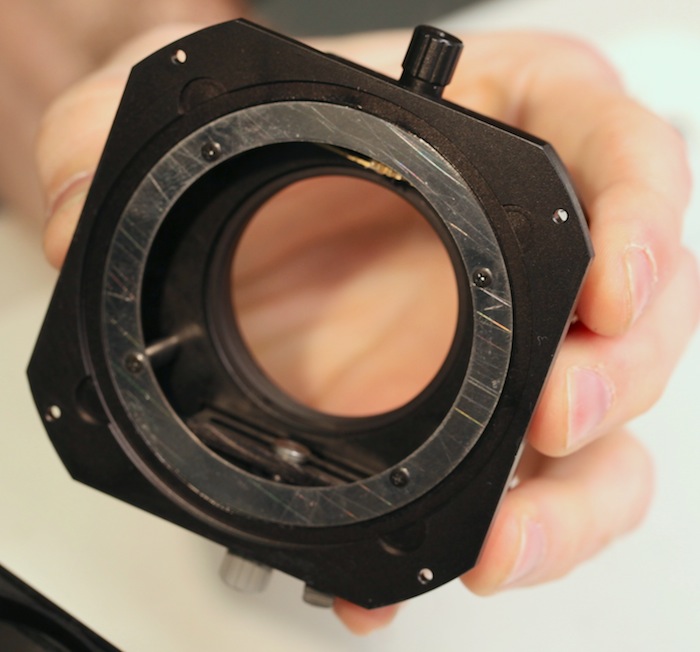 . . . from the tilt mechanism and optics. A couple of points in this area. The gears themselves are solid brass as you can see above, but the tracks they run in are plastic. 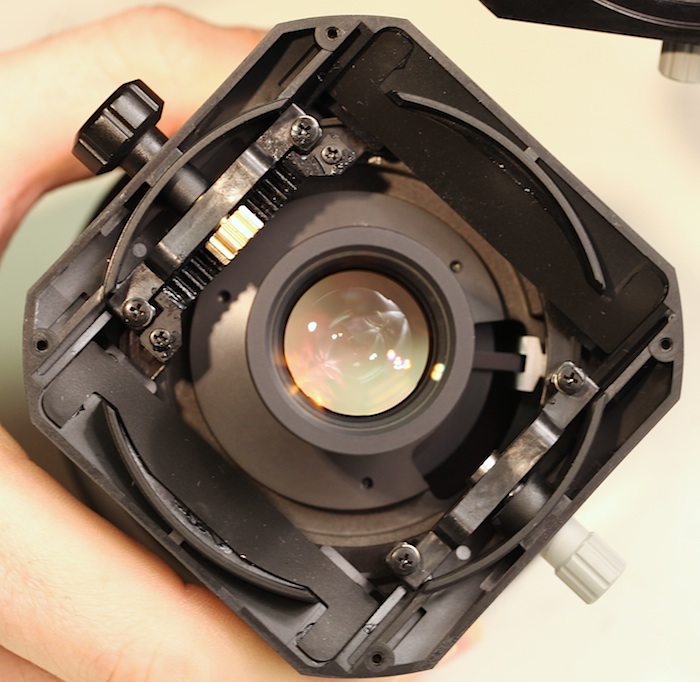 The same goes for the shift assembly in the lower section. 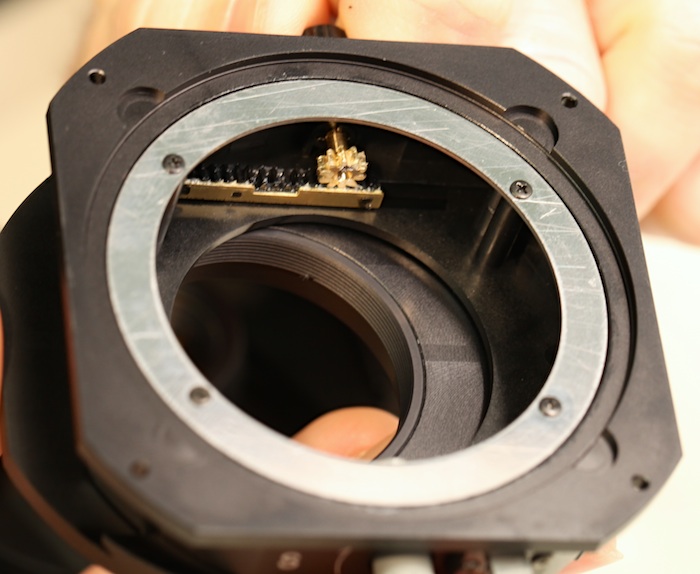 Most other tilt-shifts have brass tracks and gears. That being said, it’s not necessarily a bad thing. The Canon 70-200 f/2.8 IS lenses (including the IS II) have brass gears running on nylon tracks for the zoom ring. But, we do have to replace those every so often because a nylon tooth gets torn off. I will say these are nice, thick plastic teeth, though, so hopefully they’ll hold up well.

Also note the focus key (forked aluminum piece at 3 o’clock in the picture of the optics and shift mechanism, above). We had 3 of 8 lenses that made a scraping sound and sensation when focusing and it’s from the key, which is a piece of stamped aluminum with rather rough edges (see below). Not a big deal, I mention it mostly to let you know not to worry if yours scrapes a bit when focusing. It probably will go away as the rough edges wear off with use. 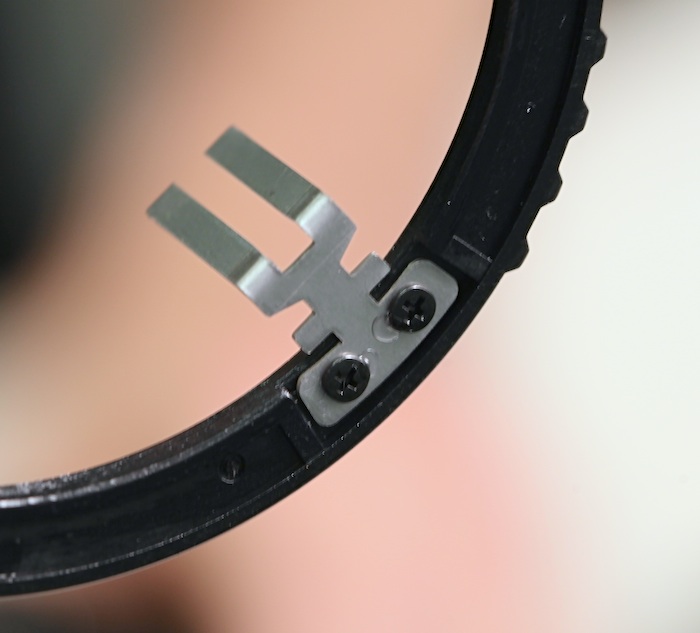 Back to work. A few more screws and the tilt mechanism comes off. 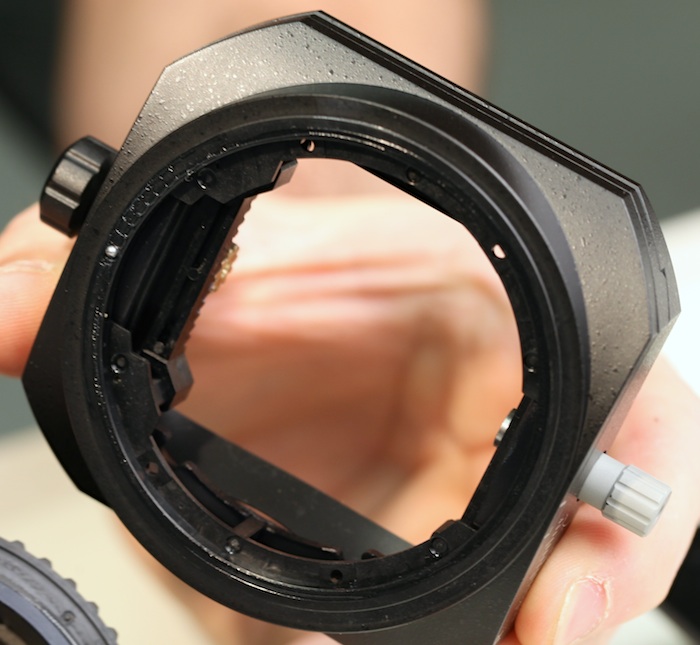 After which the aperture ring slides off. You can now see the rear optical assembly. It’s a single piece basically, with the elements held in place with glue and retaining rings. It moves as a group when focusing. 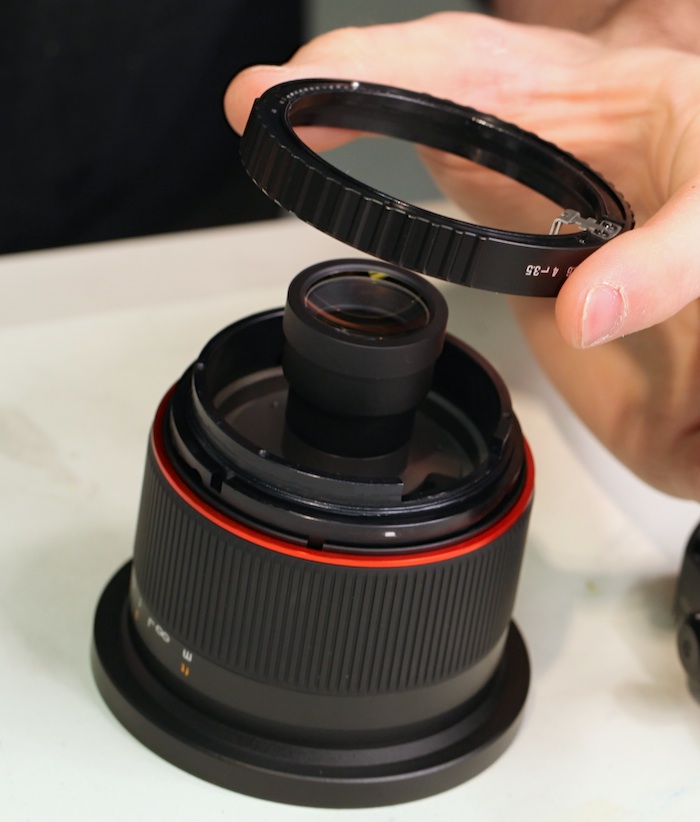 Opening Up the Front

Moving around to the front of the lens the makeup ring removes by unscrewing. 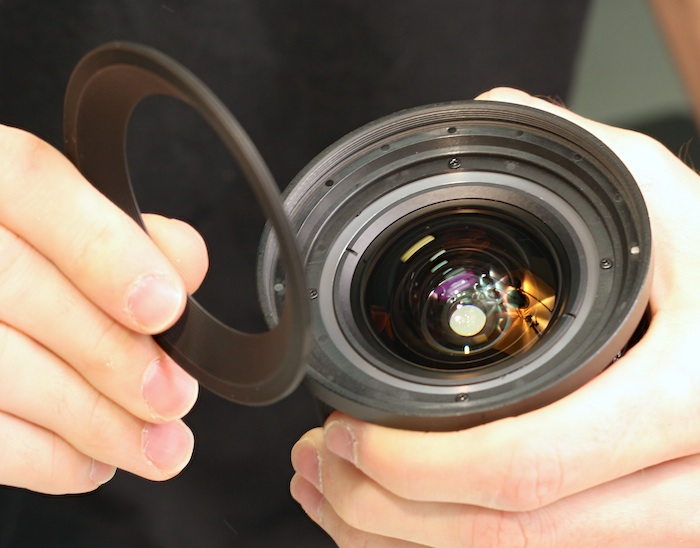 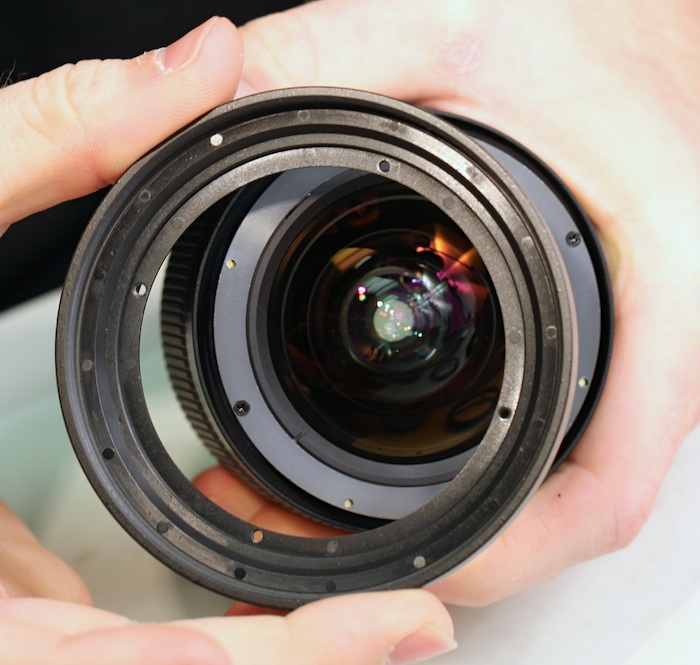 Showing the 4 screws that hold the retaining ring over the front group. 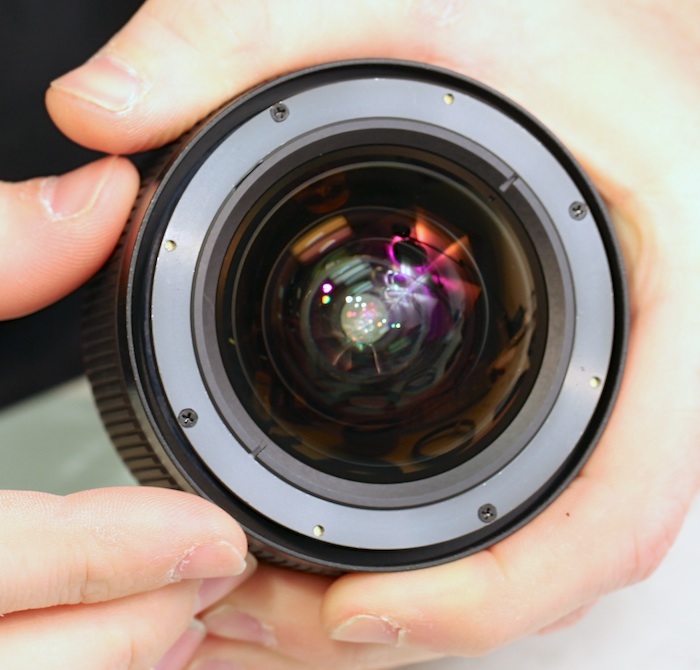 With these removed the front group comes out as a unit. 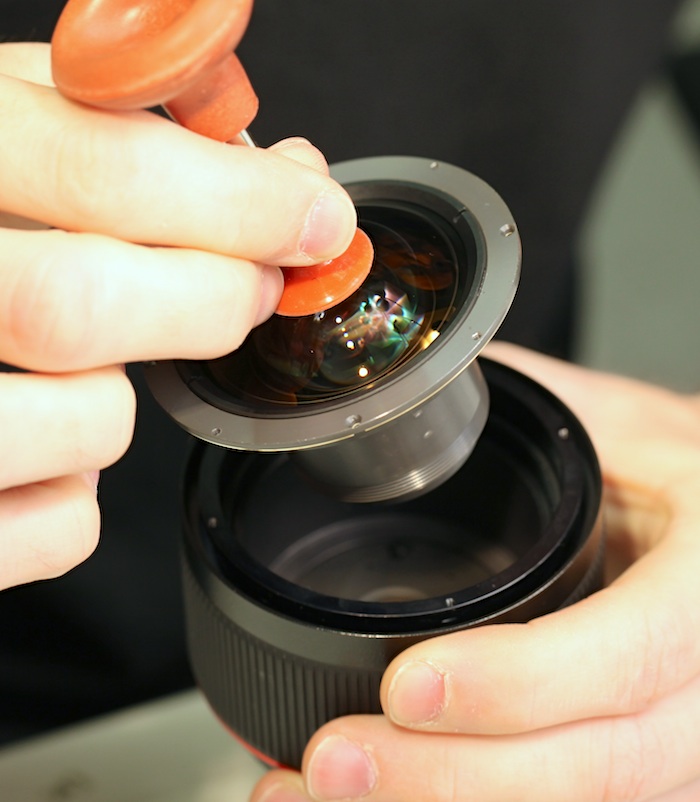 Like the rear group, the front group does not have any adjustable elements, simply shims between elements. This group is fixed, not moving along a helicoid track. 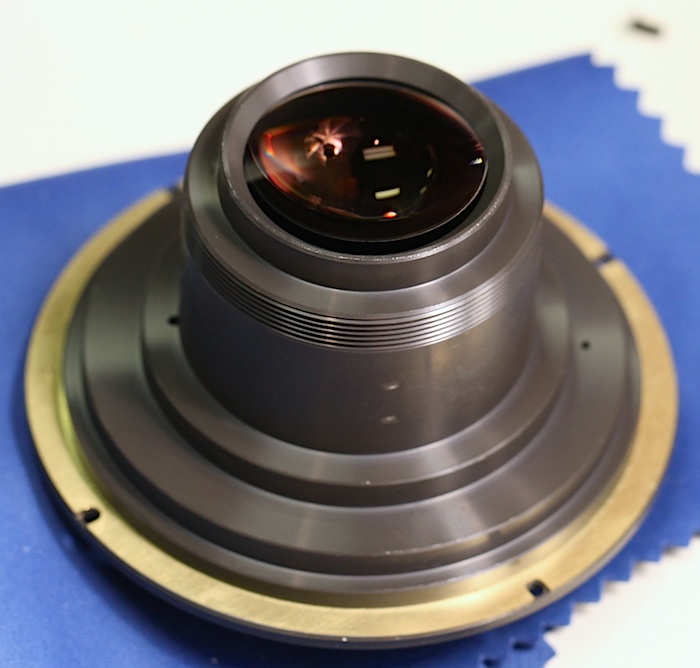 A spanner wrench would allow us to open the group and replace the front element, but since there are no adjustable elements inside we didn’t open it up further. 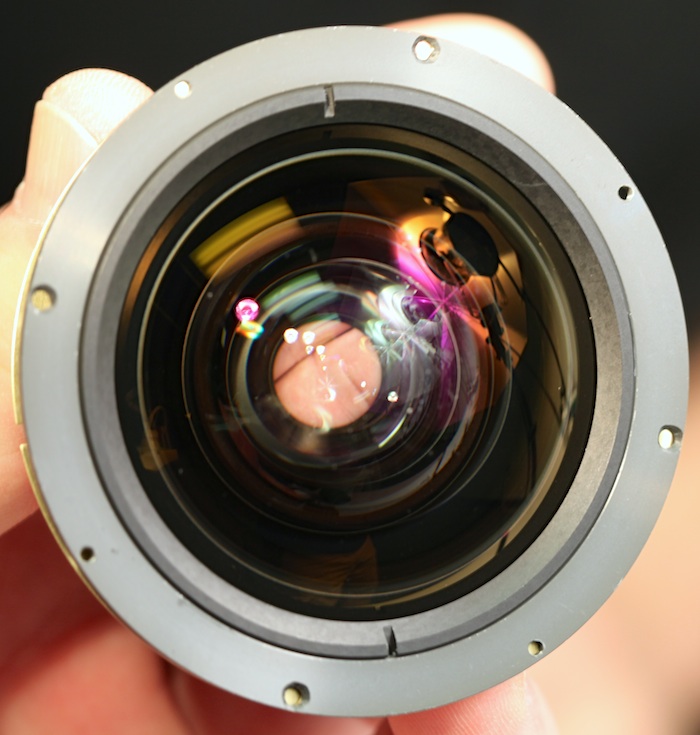 Inside the empty front barrel we can now see the 3 screws that hold the rear group in place. Again, since it’s a sealed group with no adjustments, we didn’t see any need to mess with it. 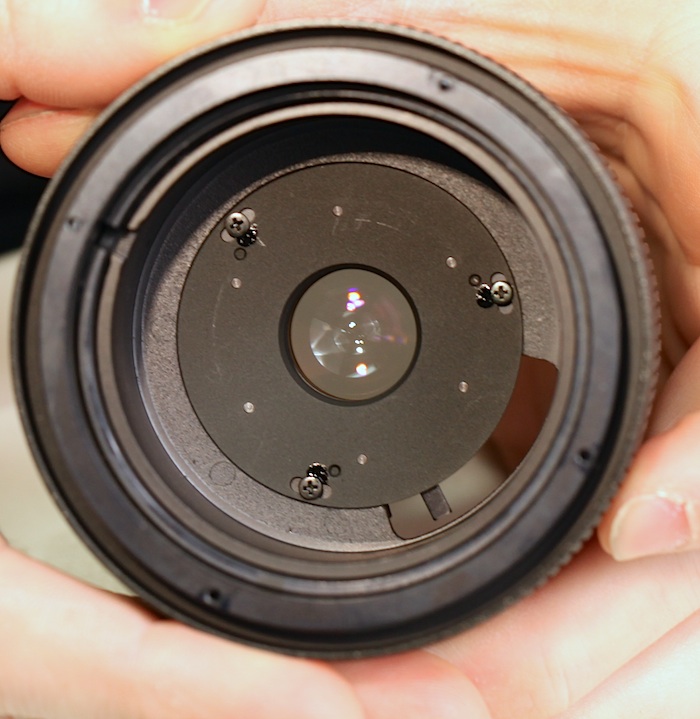 From the side you can barely see the single helicoid that focuses using the entire rear group. 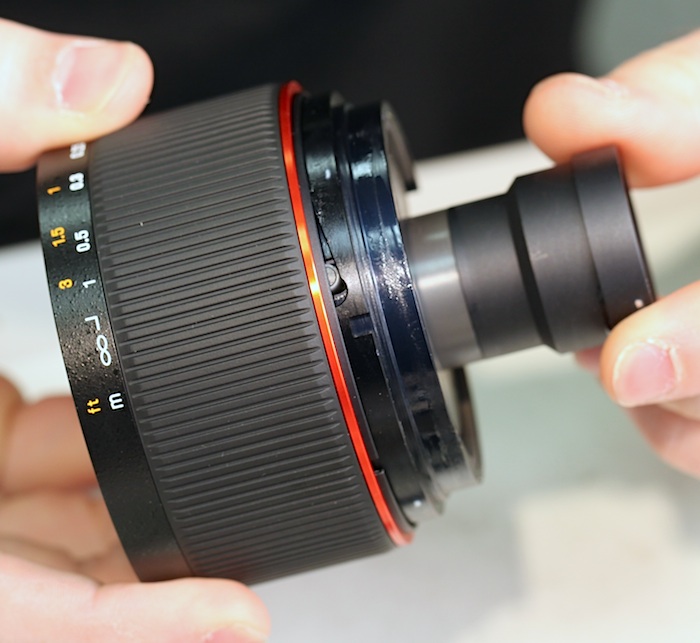 The original purpose of this disassembly was to try to get an idea about reliability of this lens. I’m left with only the single concern I had when I first examined the lens; I’m afraid the rotation-locking levers might break. That would be absolutely no big deal if the parts were available to repair it. Anyone could do it at home in 30 seconds. Without parts, though, a broken lever means you won’t be able to rotate the planes of tilt and shift.

I have very mild concern about the plastic gear rails for the tilt and shift mechanism, but it seems sturdy plastic and I’m pretty hopeful they’ll hold up well.

Otherwise the lens is really quite well made. Yes, there’s lots of plastic, but it’s very high-quality, heavy plastic with long, thickly-threaded screws holding things together. I have no concerns about the lens from a materials standpoint.

I came away with a lot of admiration for the Samyang engineers who designed this thing, and perhaps some understanding about why the lens is what it is. The design is simple, modular, and logical. That is, I expect, why the lens can be produced with high-grade materials for such an aggressive price. The disassembly took about 15 minutes, tops. Obviously assembly at the factory is going to be quick and staightforward, too.

That being said, the modular design of the two lens groups (front and rear) are a huge cost savings. There are no tilting or centering elements to adjust during the assembly process.

<begin speculation> That may (and I’m completely speculating now) also be why the resolution isn’t quite what the Canon or Nikon lenses have wide open. When designing a lens, the designer has to take into account how much variation to allow. With certain designs a given element might have to be within 0.01mm of a proper spacing distance or 0.01 degrees of tilt off the axis (I’m pulling numbers out of the air for an example) or the lens will be decentered. A more forgiving design might allow 4 or 5 times the margin of error, but in exchange allows more aberration or has a lower resolution.

It seems logical that such a compromise had to be made in the Samyang lens to allow such efficiency of assembly. The designer probably took into account that many people shoot with this type of lens stopped down, where the aberrations are minimized and the resolution very good, and decided that compromise was worthwhile to allow the lens price to be kept so reasonable. </end speculation>

All images copyright Roger Cicala, 2013 and may not be reproduced without permission.

All hands in images courtesy of Aaron Closz.

Tweet
Posted in Equipment
First Look: Rokinon 24mm f/3.5 Tilt-Shift Lens – Part 1
How to Ruin Your (or Our) Gear in 5 Minutes (Without Water)