The release of the Rokinon 24mm f/3.5 Tilt-shift lens (also branded as Samyang or Bower) has created quite a bit of excitement. For Canon and Nikon shooters, it offers a 24mm tilt-shift alternative for around half the price of the brand name lenses. For shooters of other systems, it offers a tilt-shift option they may not have had at all.

The company’s other offerings have all had excellent optics. Construction quality has been rather iffy, and getting one repaired nearly impossible. On the other hand, good optics at prices like they offer makes the build-quality trade off more than acceptable.

I should mention I’m a bit of a Rokinon fan. I own their 14mm because at $379 I think it’s an insane bargain for a very sharp lens. For that price, compared to $2,300 for a Canon 14mm, I’m more than willing to give up autofocus, accept some barrel distortion, and consider it disposable. If it breaks getting a new one won’t be much more expensive than the standard repair cost for a Canon 14mm and less than the repair cost of a Nikon 14-24.

But a tilt-shift is a lot more complex than a simple prime lens, and the RokiBowYang 24mm tilt-shift costs a lot more than their 14mm. So I’ll admit that going in I was a bit skeptical of this lens.

The first noticeable thing when comparing the Canon 24mm f/3.5 TS-E II, Nikon 24mm PC-E, and Rokinon 24mm TS lenses is the weight.  The Canon weighs in at 780 grams (27.5 ounces), the Samyang at 680, and the Nikon at 730 grams. The Samyang does NOT come with a hood, which the other two have, although they are very shallow hoods that probably aren’t particularly effective.

I think it important to note that the Rokinon has only has 6 aperture blades, compared to 8 for the Canon and 9 for the Nikon. While the Rokinon aperture is round when wide open, stopping down, even a little bit, clearly changes it to a hexagon.

One other thing I noted as soon as I used the lens: the Rokinon has smaller plastic knobs for controlling tilt-shift and locking. The small lever that allows you to rotate the lens on its base and the tilt and shift axis is rather thin plastic (compared to metal on the other lenses) that flexes about 30 degrees when pushed. That makes me a bit nervous; it certainly seems like it could break off without too much pressure.

The Samyang control knobs are smaller and less indented than either the Nikon (shown) or Canon.

As far as function, though, the Rokinon gives everything you would ask: 8.5 degrees of tilt, 12 degrees of shift, rotating base and the shift and tilt axis can be rotated so they are aligned or at right angles to each other. The Canon 24mm  TS-E can match all these functions, but the Nikon can’t match the rotations.

Unfortunately, Imatest results can only be obtained with the lens in straight position, so we can’t compare tilted and shifted. Plenty of lens reviewers will be comparing tilted and shifted images, soon, though.

We tested 4 copies in Canon mount on our Canon 5D Mk II test cameras in the usual fashion. The table below shows the results for the Rokinon versus the Canon 24mm f/3.5 TS-E L. The numbers represent MTF 50 in the center, averaged across the entire lens surface, and the average of the 4 near-corner areas.

It’s a bit unfair to compare the Rokinon with a $2,000 lens that is widely recognized as one of the sharpest tilt-shifts made, but that’s the most direct comparison. Since most people probably haven’t shot with the Canon 24 TS-E, I included the resolution numbers for the Canon 24-105 f/4 IS just to give a widely known comparison point. Put simply, the Samyang 24 TS-E resolution is adequate – not great but not awful, either.

I thought measurements against the Nikon 24mm PC-E lens might be more even since the Nikon is a much older design that is probably due for a makeover soon. We did our Nikon-mount tests on a D800, so the higher camera resolution would be expected to give significantly higher MTF 50 numbers than the Canon 5D II. (In previous tests we’ve done, the same lens will have an MTF from 15% to 20% higher on a D800 than a 5D II.)

Unfortunately, one of the 4 Nikon-mount Rokinon copies we received was badly decentered, so we only averaged the test results for the other 3 copies, averaged in the table below.

The Nikon lens clearly resolves a bit better in the center than the Samyang, although in the corner area things are pretty even.

Let’s all remember, though, that these are tilt-shift lenses. Resolution is important, of course, but absolute resolution is not the primary reason we choose a tilt-shift lens, so these tests may be less important than they would be for a standard prime lens. Unfortunately, as I mentioned earlier, our testing tools don’t let us make comparisons with the lenses shifted and tilted — it’s theoretically possible but so many new variables are introduced I wouldn’t trust the results.

The Samyang also falls behind the others on distortion, with 2.3% barrel distortion compared to 1.4% for the Nikon and 0.9% for the Canon.

Comparing the lenses stopped down provides some interesting additional information. 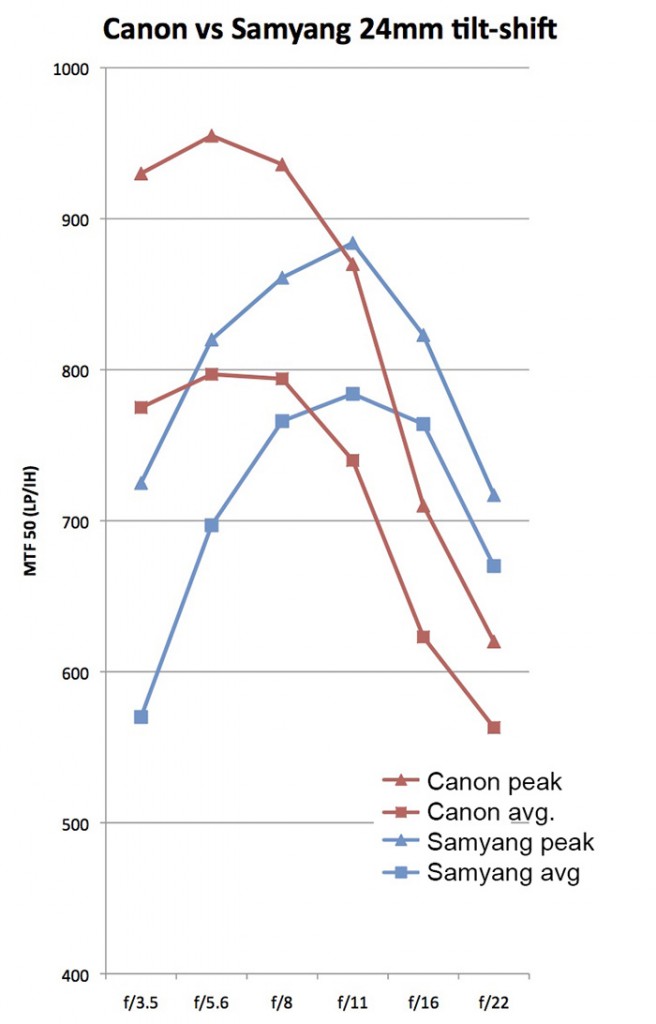 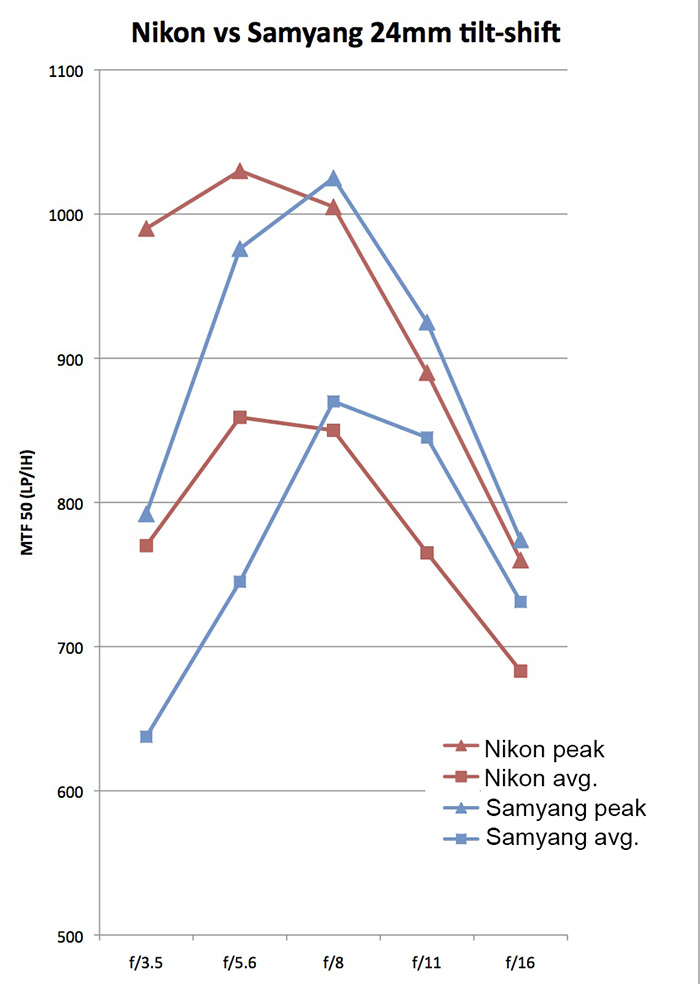 The Canon and Nikon tilt-shifts improve only slightly stopped down (for real world purposes the Canon is really identical from f/3.5 to f/8; the Nikon gets a bit sharper in the corners by f/5.6). The Samyang, however, improves quite a bit stopped down.

On the 5D II it never quite catches the Canon lens’s peak resolution, but at f/11 they are identical. (The Canon lens is not getting any sharper from f/8 to f/11, so all we see is diffraction softening. The Samyang is still improving optically, more than enough to offset the diffraction softening.) Compared to the Nikon lens Samyang has almost identical resolution at f/8.

This is a rather important point. A landscape shooter who plans to use tilt function to maximize depth of field and shoot at small apertures should find the Samyang very competitive with the brand name lenses. Someone who plans to shoot at wide apertures will almost certainly notice the difference.

Obviously this isn’t a review — I’m a tester not a reviewer. I was able during the few hours it hasn’t been raining this weekend to take a few shots with the lens on a Canon 6D. They may give a little idea about untilted/unshifted image quality and a chance to look at out of focus areas.

Evaluating the out of focus areas, it appears the lens has both longitudinal chromatic and spherical aberration wide open, which is probably why it sharpens up so nicely stopped down. If you want to see 100% jpgs, you can do so HERE. 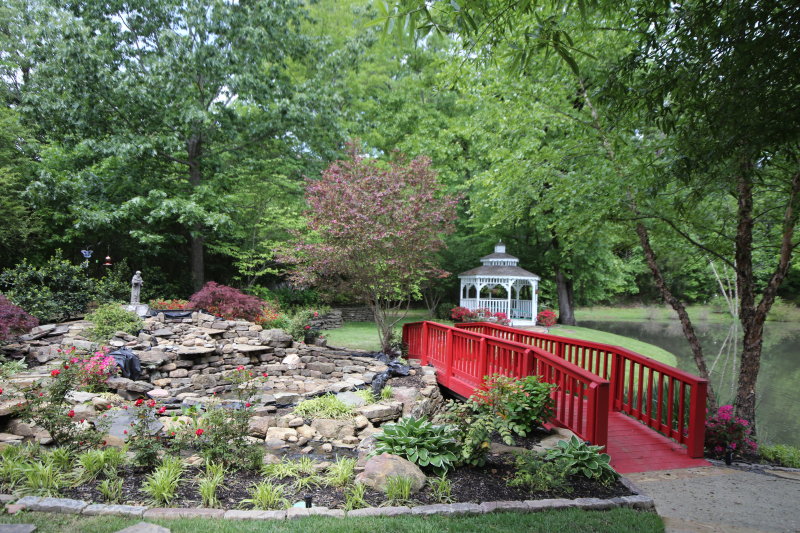 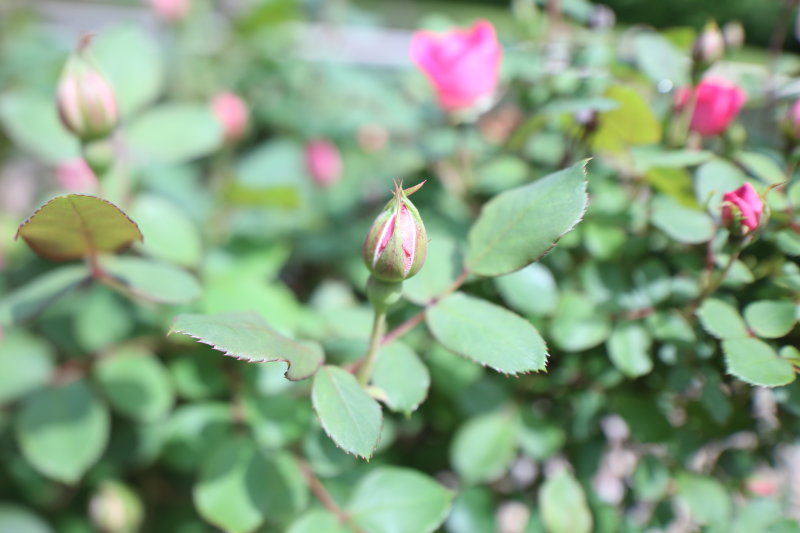 Tilted to minimize depth of field 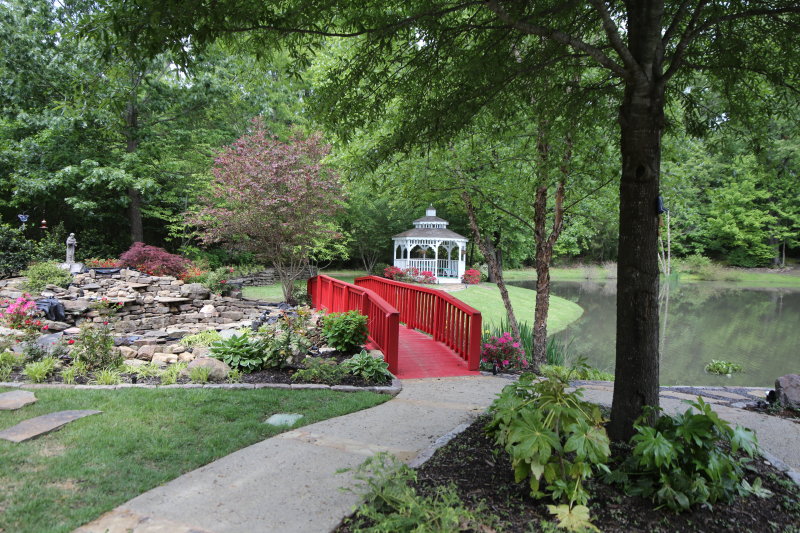 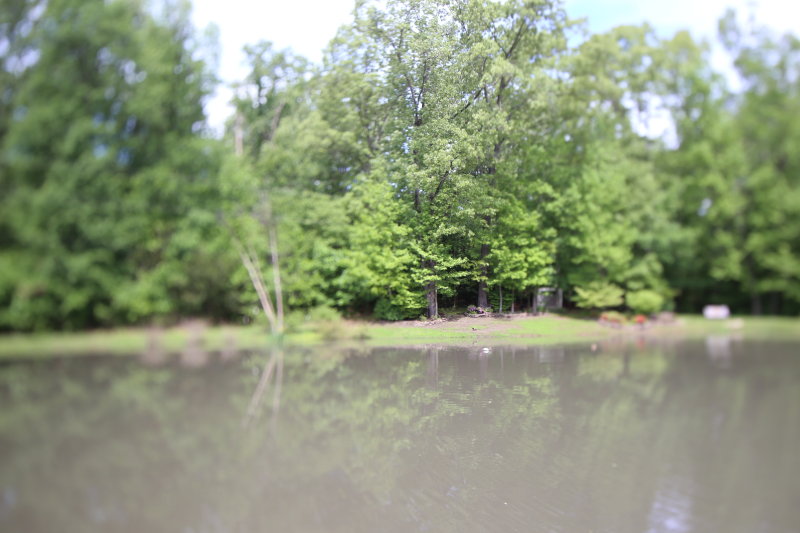 Obviously this isn’t a full review (that’s not what I do), but hopefully will provide a little information for those considering this lens.

For those who primarily shoot this kind of lens stopped down, it may be a very good choice. Wide open it’s still acceptable, but the difference between it and the Nikon and Canon versions are going to be noticeable at f/3.5.

I am concerned about the reliability issue, especially given the difficulty in getting RokiBowYang lenses repaired in the U. S. I’ll be tearing one down in the next few days and hopefully looking at the build inside will help alleviate (or confirm) those concerns.