There is a bit of confusion regarding the names of the old versus new version of Sigma’s 30mm DX (crop sensor) lens. The original version is officially the Sigma 30mm f/1.4 EX DC HSM, while the new one is the Sigma 30mm f/1.4 DC HSM A1. I think. I do want to thank them for not calling it the 30mm f/1.4 X, though.

Since we got a nice bunch of the A1 version lenses in yesterday, we thought it would be worthwhile to do a bit of comparison with the older version. For those who haven’tused the original Sigma 30mm f/1.4 lens, it was something of a love-hate relationship. The original 30mm was small, sharp, and inexpensive; a perfect combination for those shooting a crop sensor camera. Unfortunately, it had the somewhat dubious combination of being rather inaccurate to autofocus, yet extremely difficult to manually focus because of its inaccurate MF ring. There was, perhaps, a bit more copy-to-copy variation than many of us found acceptable.

Sigma’s new version of the 30mm APS-C only lens, would, we hoped, eliminate those negatives. It might even be dramatically better than the original version optically. The original wasn’t a bad lens at all, but the recent Sigma 35mm f/1.4 lens had most of us anticipating something impressive with the new 30mm, too. But before we get to the optics, lets take a look at the two versions. 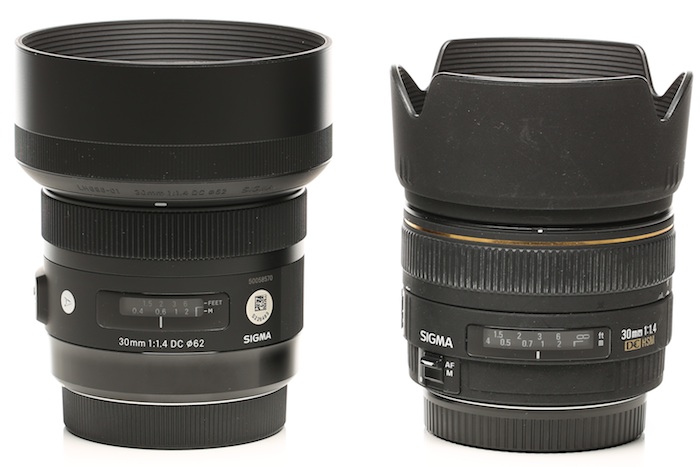 So the new lens gives us a new optical formula, an extra aperture blade, and closer minimum focusing distance to go along with a higher, although still reasonable, price tag. It also comes with the much improved outer coating that doesn’t peel off like the one on the original lens and a HSM (hypersonic) motor that should improve AF speed and perhaps accuracy.

After putting the lens on a camera the build difference is immediately apparent. The lens feels more solidly built, particularly the hood. Most immediately apparent, though, is that the manual focus ring turns smoothly and accurately, which is not at all the case with the gritty, jumpy, inaccurate MF ring on the original version. Did I mention I didn’t like the original MF ring? To paraphrase Shakespeare, “I would beat thee, but that would only infect my hand.” The new one, though, is a pleasure to manually focus; smooth and accurate.

I don’t usually put optical formulas and MTF charts in these posts, but I’m going to make an exception today. Because the lenses look so similar on the outside and have such similar names, I think it important to demonstrate how different they are inside. Here are the optical formulas for the two lenses.

The MTF charts from Sigma’s calculations would suggest the new lens is much better than the old along the edges and corners.

I need to mention that we tested these lenses on a Canon 7D. Results would be slightly different on other cameras so please try not to make comparisons to, say, the Sigma 35mm f/1.4 tested on a Canon 5D Mk III. Yes, I know you’re going to anyway, but at least now I can say, “I told you so.”

Anyway, we compared the 8 copies of the 30mm A1 that came in today with 6 copies of the 30mm f/1.4 DC that were on the shelf. As usual, average MTF 50 across the entire lens is plotted on the vertical axis, center MTF 50 on the horizontal, both in Line Pairs / Image Height. 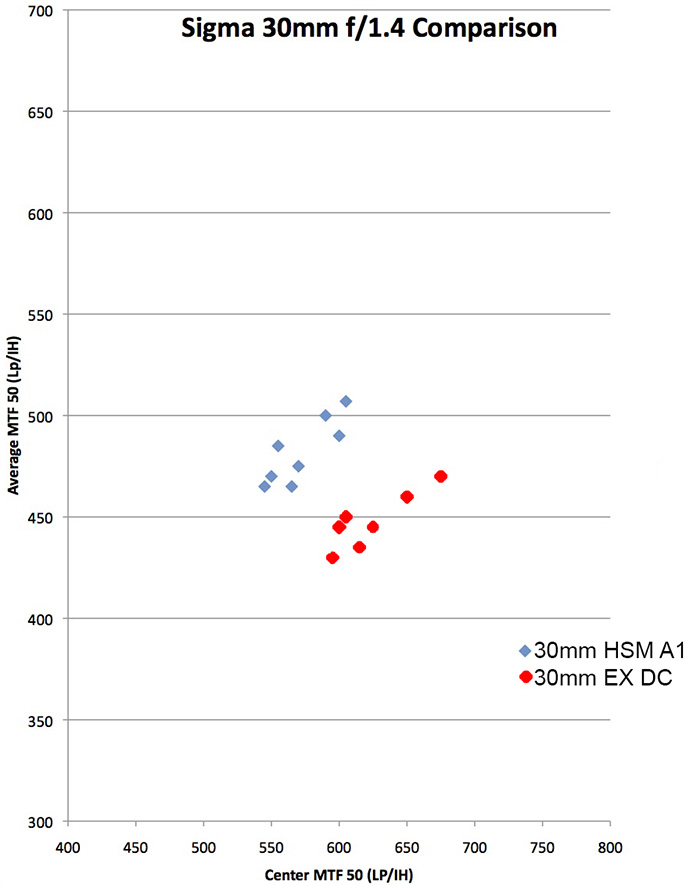 As you can see on the vertical axis, the new version (blue dots) has slightly higher overall (average) resolution, while the older version (red dots) has, perhaps, slightly higher center resolution. (The center difference is pretty minimal and I doubt you could pick it up even pixel-peeping.) The difference away from the center is a bit clearer when presented as a table with corner values included.

The lenses, at f/1.4, are about identical in the center, but the new version is significantly better in the corners.

Let’s look at how that changes as we stop down. 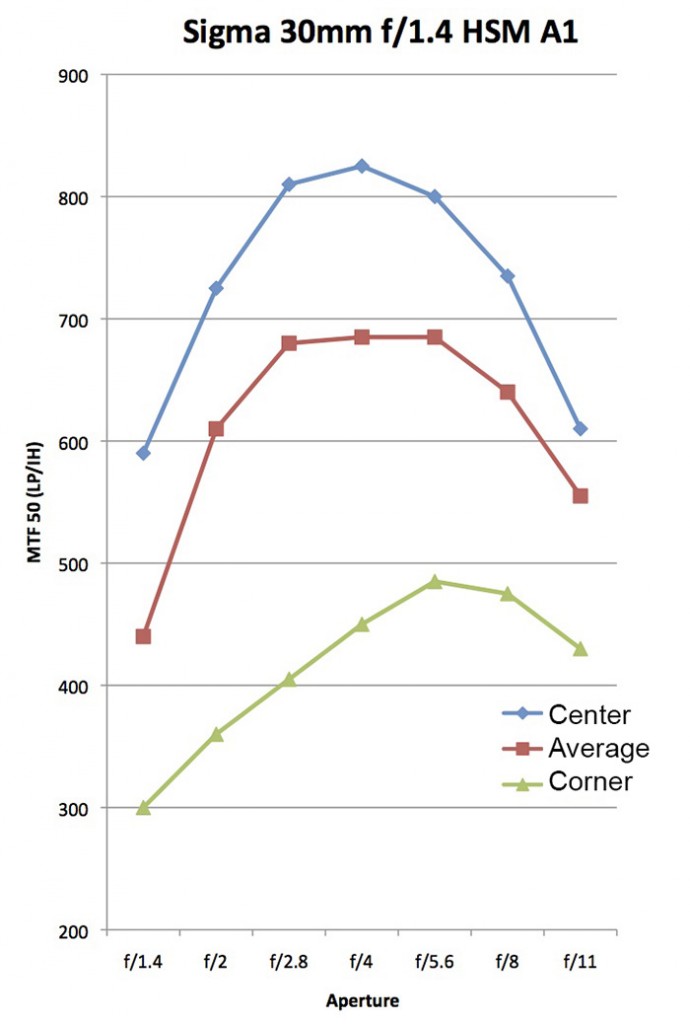 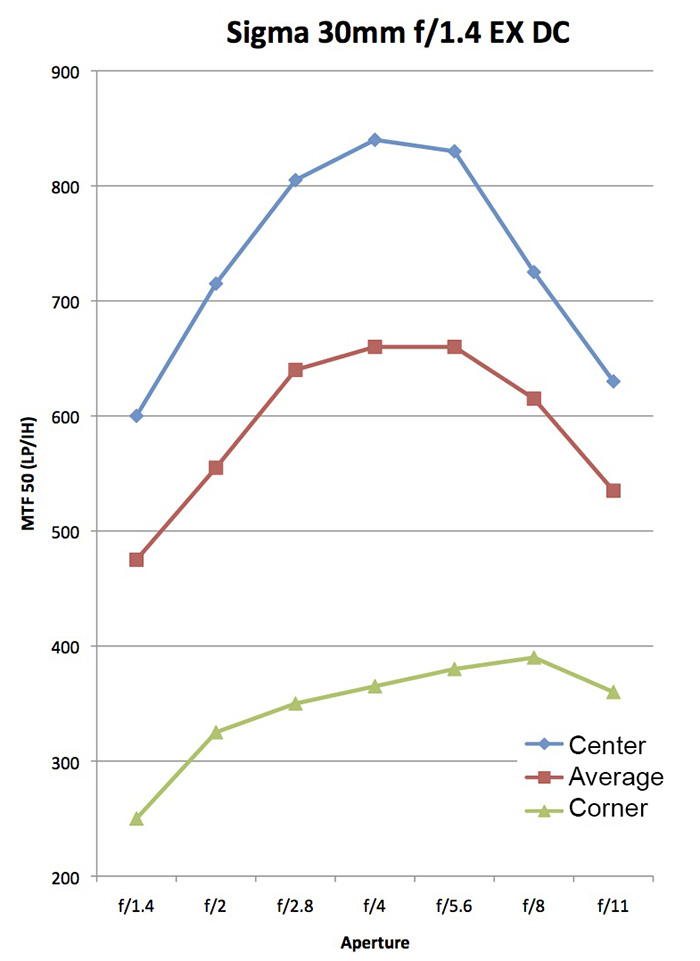 Like a lot of people, I was hoping for a crop-sensor version of the Sigma 35mm f/1.4 full-frame lens; an amazingly high-resolution optic. This lens isn’t that good optically. It’s a very nice lens with good resolution and excellent corner performance. If corner performance is important to you this lens is a significant upgrade. If you are more interested in center resolution, than optically it’s not better than the original.

However, I’d still consider this a worthwhile upgrade for a number of reasons. Build quality is far better. The new lens can be accurately focused manually, something that live-view shooters like myself found was difficult to do with the original. I can’t speak for autofocus accuracy yet, but the Sigma USB dock,which now has a release date of early May, will allow us a degree of microfocus adjustment not available with other lenses. The dock is fully compatible with the A1 lens. To me, that’s worth the price of the upgrade right there.