We have a routine when a new lens comes out at Lensrentals: the first new copies get sent to me for optical testing. I have about 4 or 5 hours with them because they’ll have to be packed up and shipped out to the customers that have been waiting for them and expect them tomorrow. So when Kenny brought me the first half-dozen Nikkor 58mm f/1.4 lenses he said the most unexpected thing. “We only have 1 preorder, you can keep 5 of them.”

We got another shipment the next day. Most of them are still on the shelf, too. For whatever reason, there doesn’t seem to be a lot of mouth-watering excitement about this lens.

Let me be fair. Nikon has said, very clearly and very plainly, that this lens is not about the numbers. It was designed to have a very smooth look, have excellent bokeh, minimize sagittal flare and coma for shooting lights at night, have limited vignetting, and be evenly sharp across the field of view. Those are great goals and in real photography are often more important than how well a lens resolves.

But they are largely things that will require field photographic evaluation, not lab evaluation, to determine. Which means you’ll have to wait for the real photography reviewers to tell you about that. I’m not one of those; I do optical lab testing.

But, I had some lenses, and I had some machines, testing lenses in the lab is what I do, so I tested them. Just take it for what it’s worth: a lab evaluation of a lens that isn’t designed for lab evaluation. 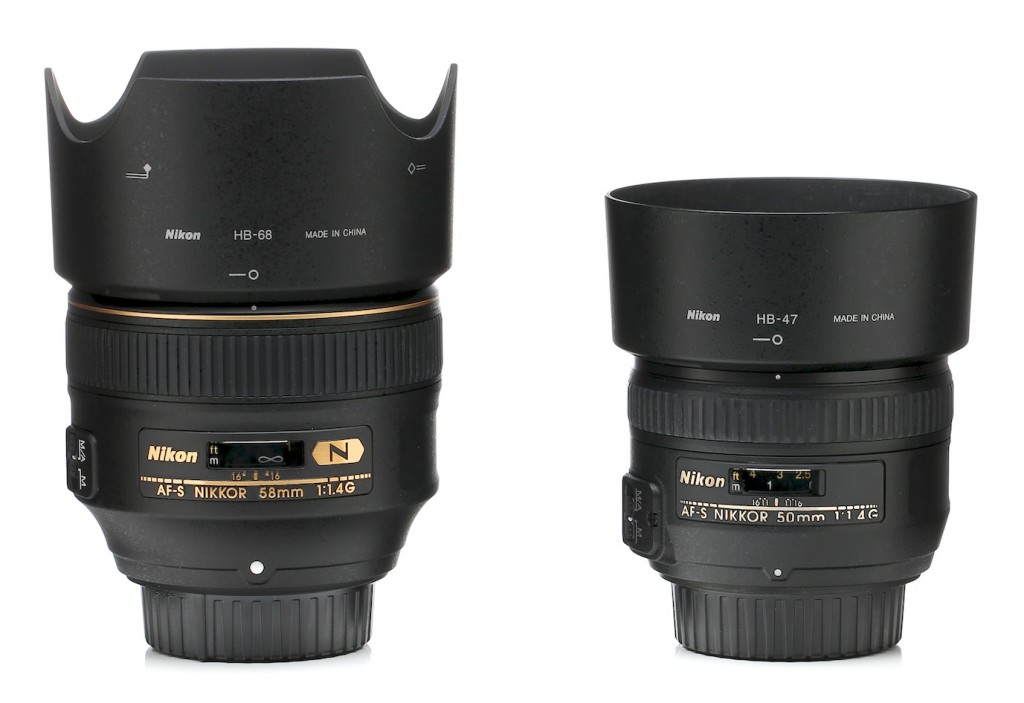 Obviously the 58mm is quite a bit larger and has a cooler-looking hood, but let’s take a look at the other differences.

The optical diagrams show that the 50mm is a fairly classic double-gauss design, while the 58mm is more highly modified. 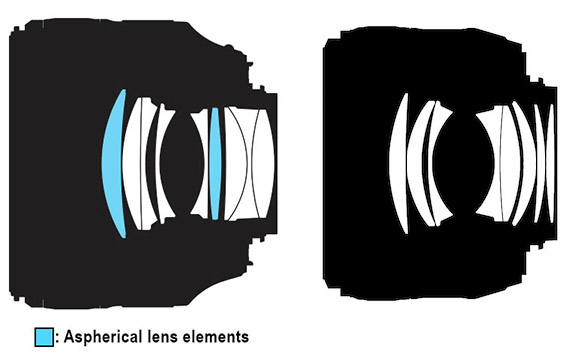 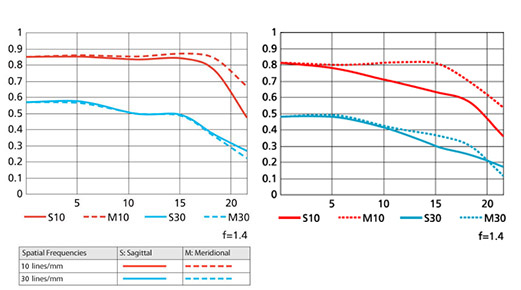 I compared 6 copies of the Nikkor 58mm f/1.4 G with 6 copies of the Nikkor 50mm f/1.4 G from our stock. The 50mm were used copies, but all had been recently tested and were known to be in spec. (I should also note that I did not use previous results we’ve gotten testing Nikon 50mm f1.4 because our testing methods have improved since the last time I tested these – larger charts, better focusing techniques, etc. – so I didn’t want to use results obtained with older testing.) Testing distance was 13-16 feet (depending upon which lens) using unsharpened raw images from a Nikon D3x as test camera. If you want to get into the geeky parts of our Imatest procedures you can read all about them HERE or HERE.

The table below shows the average (mean) MTF50 in LP/mm at the center, averaged across the entire surface of the lens (26 points), and averaged for the 4 corners.

OK, it’s easy to see that the center resolution is tiny bit better for the 58mm lens, and that the corners are clearly better (which is what we were told would happen). But there’s one weird thing that should stand out. Despite being not-quite-as-sharp in the center, and definitely not as sharp in the corners, the 50mm has higher average resolution than the 58mm. What’s up with that?

The answer is some interesting field curvature. When we run Imatest, we assure best possible focus (by focus bracketing– taking images on either side of what appears to be the best focus – then keeping the image with the best focus and therefore highest values). The image I use is the best center focus (because I think that has the most real-world application) and then accepting the numbers for the other 24 points on that image. Some testers take the best value for each point from all of their images, so they may use the center value from image 3, the right corner from image 6, the midpoint from image 2, etc.

If a lens has field curvature, as many do, then taking the best value from each image gives you the best the lens could do if focused on that spot. Taking all the values with best center focus (what I do) makes the best values from the corner seem lower, but I think they’re more real-world, since most of the time I’m focusing on something near the center. Neither one is right nor wrong, it’s just two different ways to do it. We could do both, but that makes for some long articles so most people do one or the other.

Anyway, the 58mm lens has an interesting pattern: when the center is in best focus, the corners are also in best focus, but the middle area is a bit out of focus and hence less sharp on Imatest. The Imatest print out from one of the test shots probably will explain it. 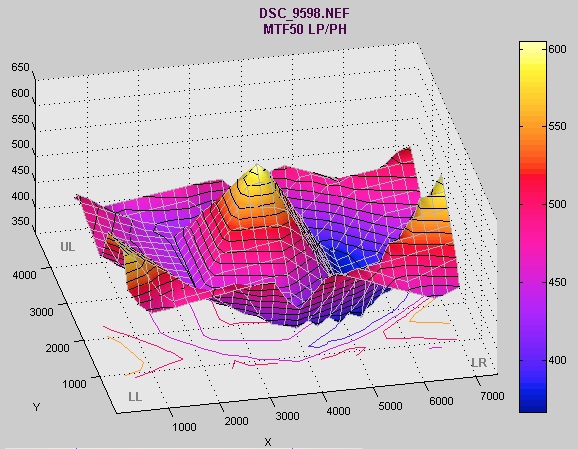 There’s sort of a ‘moustache’ field curvature at this shooting distance with the lens wide open. Compare it to one of the 50mm Imatest graphs at f/1.4, which shows the more typical Nikon ‘just falling off in the far corners’ pattern. 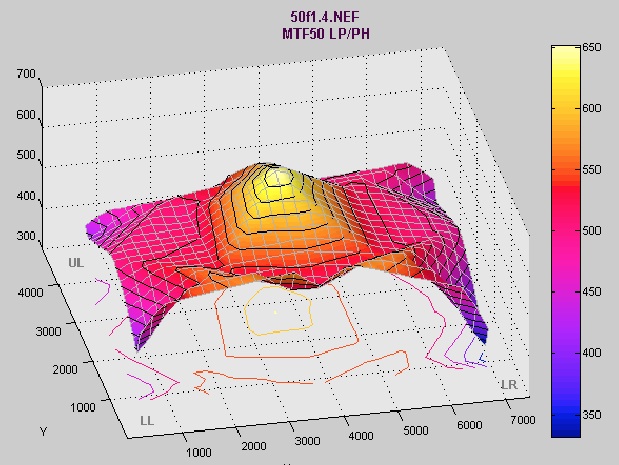 I mention this because if I had ignored the field curvature and used the best numbers at each point from any image, the 58mm average would have been higher. By f/2.8, though, the field of best focus has straightened out completely and the point is moot. It also seems that the field curvature isn’t so significant at infinity, at least according to our optical bench (I’ve attached an optical bench cut as an addendum showing how flat the focus field is at infinity, but I’m not going to compare optical bench results yet. I’ve only got optical bench data on a few hundred copies compared to thousands of Imatest results, so I’m not comfortable writing about it yet.)

As an aside I would guess this tradeoff was selected by design to keep corner aberrations low, which is one of the points Nikon’s marketing emphasizes. It may also be a positive if this is used as a portrait lens since areas off center may be more blurred than they would otherwise. But it may also mean using those off center focus points will have a bit of a learning curve. (See, geeky stuff can have some practical use.)

Distortion for both the new 58mm and the 50mm is about the same with 1.7% barrel distortion.

One thing I’m trying to do more is include numbers at various apertures for each lens. Here are the results for the 58mm as we stop down:

Compared to the results for the 50mm below.

Both sharpen up nicely and steadily as you stop down (not that a lot of people are going to shoot these stopped down) through f/5.6. There are some minor differences between them, but nothing dramatic.

As I said when I started, Nikon’s marketing blurbs on this lens “virtually no sagittal coma or light falloff” are not things I tested in the optical resolution lab. For many people (OK, for some people), those are the things that will make them want this lens at any price.

If you aren’t familiar with the differences between optical bench and computer image analysis (like Imatest) results, you can read the geeky stuff HERE.

I’m including an example printout of one of the 58mm lenses because it shows there really isn’t much field curvature at infinity.The optical bench takes multiple readings, changing the focus in 5 microns increments. Looking at the data across the lens field we get a look at the field curvature at infinity. For this lens the best focus across the entire surface of the lens across the entire field was at -30 microns, indicating a flat field at infinity – at least to the limits of this test (+/- 15 degrees from center). 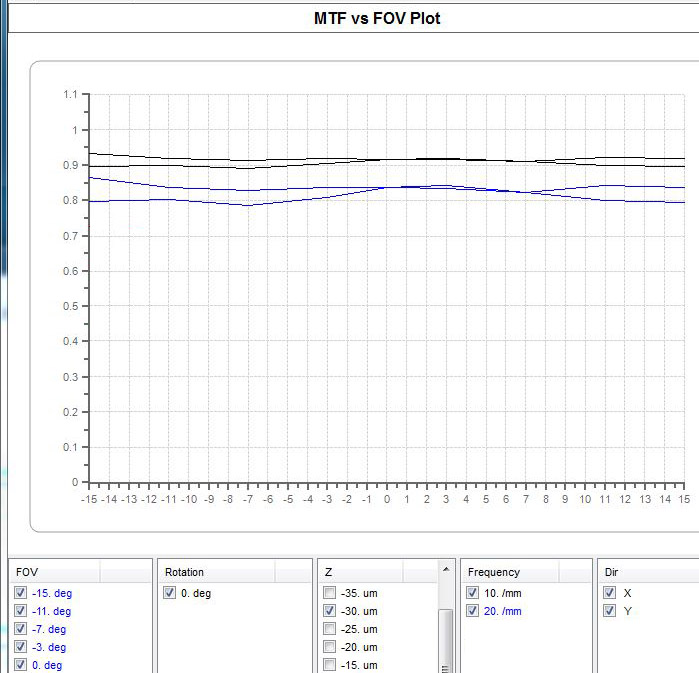 There are a lot of reasons why field curvature would be different at different focusing distances. In fact, it’s quite common.