Field Curvature and Stopping Down

What I know that I don’t know doesn’t cause me much trouble. I don’t know the formulas for 7th order optical aberrations for example. I don’t know enough math to calculate those formulas even if I did memorize them. But I’ve got shelves of books on optics and friends who know way more optical theory than I do. So if I need to find out something about 7th order aberrations (mercifully, to date that hasn’t been necessary) I can go find out about them.

What I don’t know that I don’t know causes me all kinds of trouble. I had yet another learning experience last month relating to field curvature (more accurately, the plane of focus curvature). Like everyone else I knew that when I stopped the aperture down on a lens the image got sharper and the depth of field got larger. I knew that the center might sharpen up more than the corners, at least at first. But I assumed that if the corners were getting sharper, and the center was getting sharper, than everything in between was getting sharper, too. It turns out that isn’t always the case.

I’d also never really thought about what happens to field curvature when you stop down.  If I thought about it at all, I probably assumed it would flatten out. Or maybe stay the same but the increasing depth of field would make it less noticeable. Turns out that isn’t always the case either. So, because I made assumptions and didn’t know what I didn’t know, I wasted a lot of time. Weeks of time.

But that’s a really geeky story I won’t bore most of you with (I’ll put it as an addendum at the bottom for you fellow geeks who can’t wait for the next episode of ‘Roger figures out what he should have already known’). For the rest of you I’ll just make a nice, quick practical demonstration of how field curvature behaves as we stop down, using the lenses I blogged about last week – the wide-aperture 35mm lenses.

What These Graphs Are

Let’s do some quick terminology so we’re all on the same page. Most of us call what I’m going to describe today field curvature, but plane-of-focus may be a better term. Basically if I focus the center of my lens on an object at a certain distance away, that object is (in theory) at the sharpest possible focus the lens can provide.

Let’s say the object I focus on is a perfectly straight barbed wire fence at right angles to my camera. Let’s pretend there’s a row of rocks a few yards in front of the fence and some trees a few yards behind. If the plane-of-focus of the lens is perfectly flat, then the entire fence is in focus from one side of the image to the other, with the rocks and trees just a bit softer.

If the field curves, however, at some distance from the center the rocks (or the trees) may be in better focus than the fence. If the curvature is complex (so-called mustache curvature) the fence is sharpest in the center, but as we move away from the center to the edge of the image the rocks get sharper, then the fence comes back in focus, and finally the trees are the sharpest. Or some similar variation on the theme.

The optical bench lets us look at the plane of best focus for any lens at infinity, and I’ve been showing it for the lenses I’ve recently tested. But I’ve only been showing it at the widest aperture. I think you might find it interesting to see how the field behaves as we stop the aperture down.

Remember, the sagittal and tangential field curvature is different for most lenses; at least most wide-angle lenses. These are representative samples from a single lens; the number of points that goes into these calculations makes averaging multiple copies difficult, so we test several of them and show you one of the ‘average’ ones. Sometimes there’s a very slight tilt to the field (usually the tangential field) that is noticeable on the optical bench, although it wouldn’t be in a photograph. 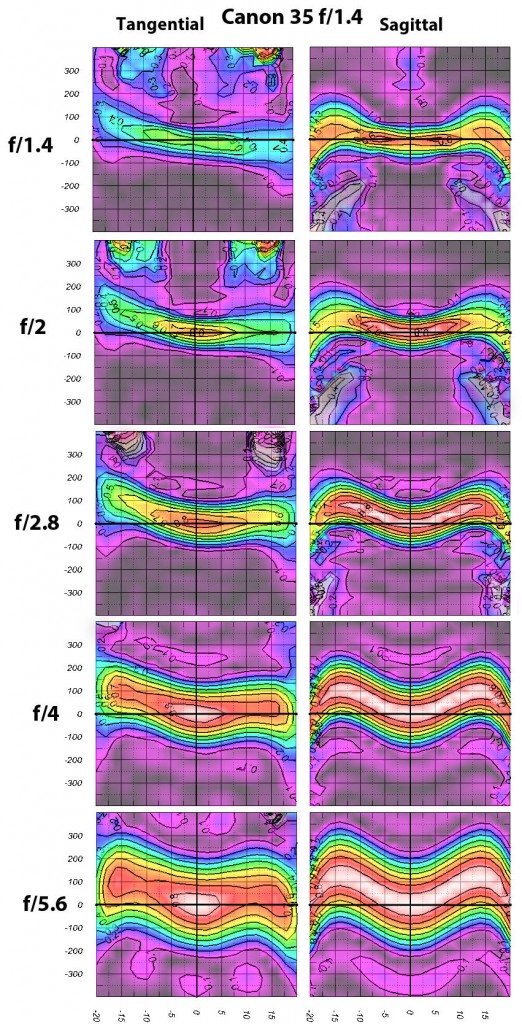 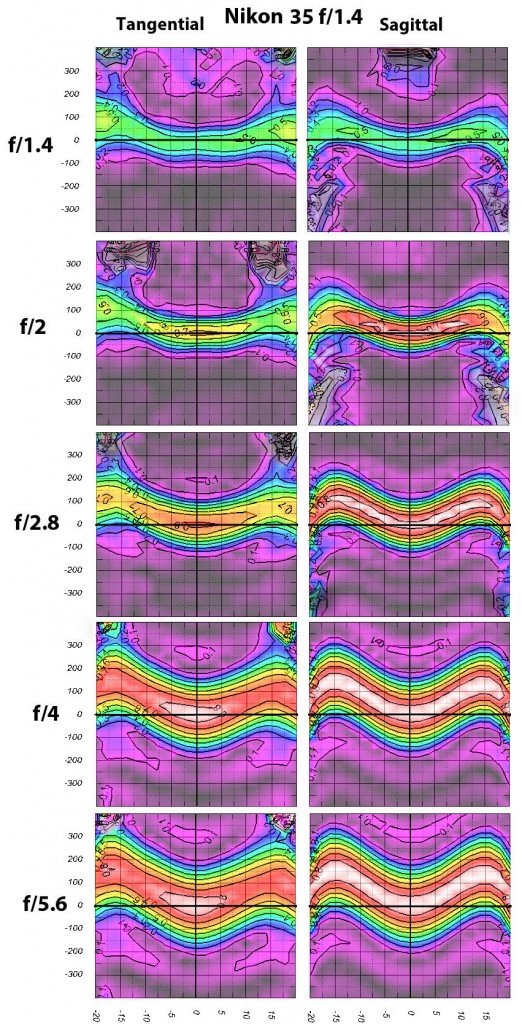 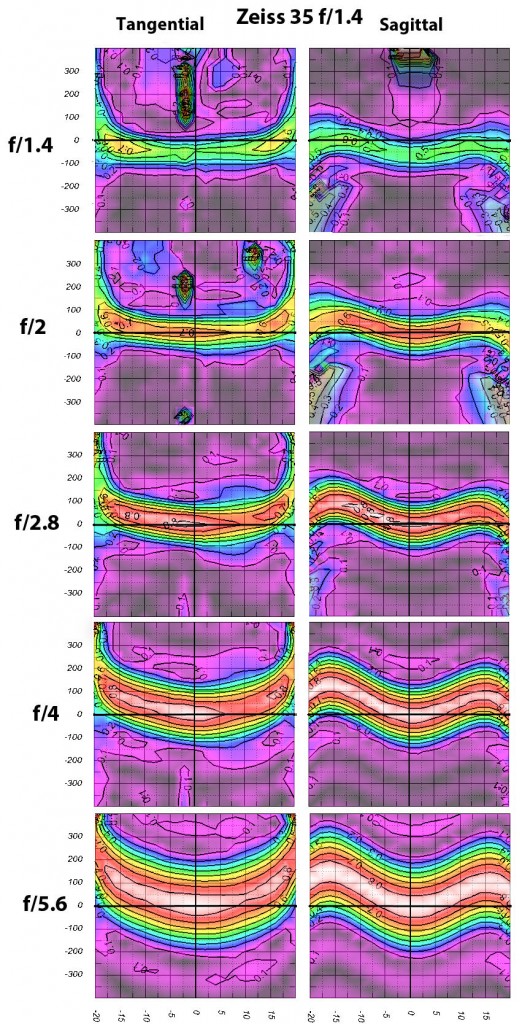 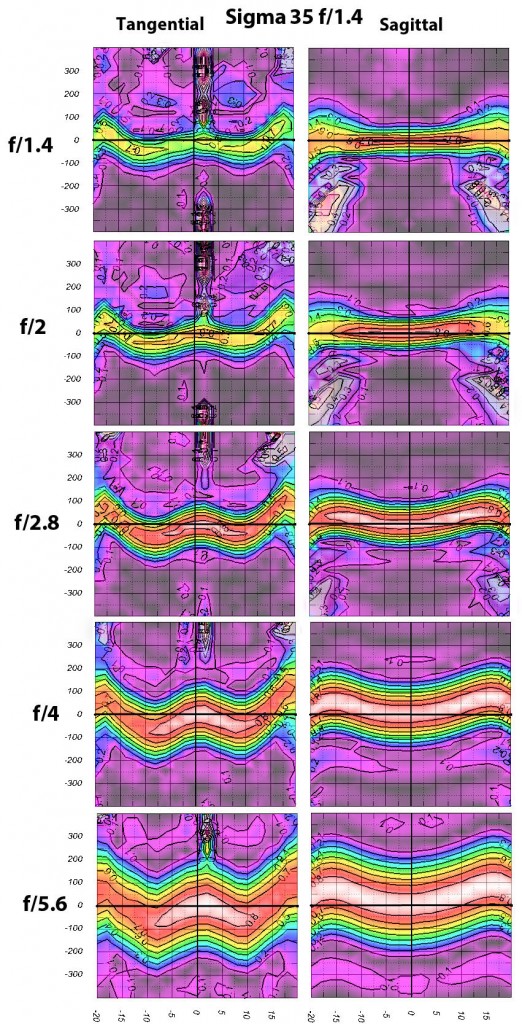 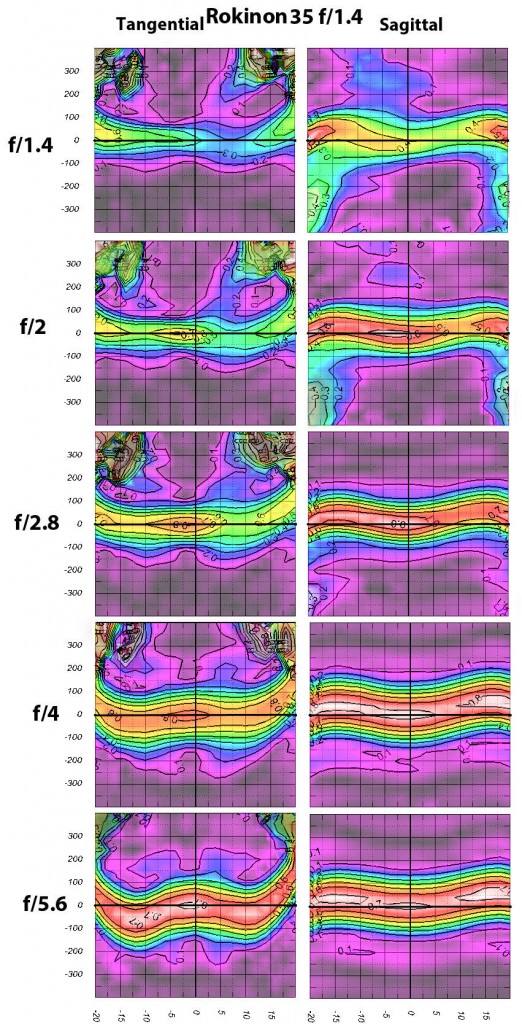 I’m not going to go into great detail telling you what you can see for yourself in the graphs. But I do think it’s worth pointing out a couple of things. First, the thick horizontal line across the center of each graph is where the center is focused. If you follow it from one side to the other on the sagittal graphs, you’ll note that for most of these lenses are a bit sharper at the absolute edges (because it’s in better focus) than in the area about 3/4 of the way from the center to the edge. It may be a bit clearer on the graphs that are stopped down a bit than on the wide-open ones.

For some lenses (the Zeiss in particular, but the Sigma does, too), the field curvature near the edge is going in opposite directions on the tangential and sagittal curves. Stopping down to f/5.6 is not going to eliminate astigmatism along the edge in these lenses.

My major point is that when stopping down, the field doesn’t really flatten. If you look very, very closely, in a few instances the curvature actually increases in certain locations as you stop down, but that’s a geeky detail. The takeaway message is that stopping down a lens doesn’t flatten the field. You have to stop down enough that the depth of field becomes greater than the curvature.

For the 35mm f/1.4 lenses that means at least f/8. As we do field curvatures for other lenses you’ll see that isn’t always the case. There are some general guidelines we’re seeing. For example telephoto lenses (even at 85mm) have less field curvature. Wide-angle lenses tend to have more, or at least more complex curvatures.

For most of you who are stopping down for landscape or architectural work, lenses with flatter fields might be more important than the sharpest lens. If you like the Canon and Nikon lenses (and there’s a lot of reason to like them) you might want to be aware that the absolute edges might actually be slightly sharper than the area just short of the edges. (This may seem unimportant, but I know some people who frame an image expecting to crop the absolute edges, so that they keep the ‘sharpest’ part of the image.)

Finally, I should point out that the frequency of MTF measurement makes a difference in the depth of the field. All of the above graphs are done at 30 lp/mm, which I think is a nice compromise between acutance (contrast) and resolution (fine detail). But to give you an idea, I’ve repeated the f/1.4 graphs for a Canon 35mm f/1.4 lens below, at frequencies from 10 lp/mm to 75 lp/mm. 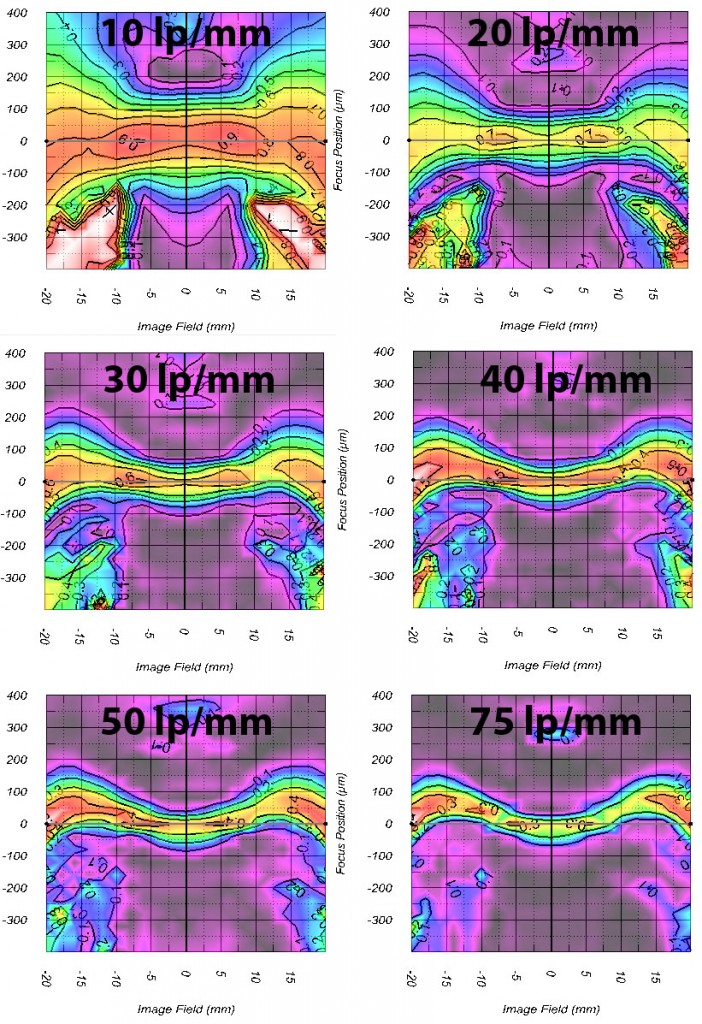 As you can see from the 10 and 20 lp/mm graphs, the curvature is less dramatic at lower frequencies, while it becomes more pronounced at higher frequencies. Someone taking images of large objects with strong contrast and posting them online isn’t going to care much about the field curvature. Someone who finds fine detail critical and makes large prints, like a landscape photographer, may find it a critical issue.

This part is of no practical importance, but I know some of you like reading about those frequent occasions when our research shows me something I don’t understand. Or that I don’t believe. Or both.

This all started when I wanted to do stop-down MTF curves for all of the lenses. I started with a Canon 35mm f/1.4 lens and did our usual 4 quadrant MTF curves wide open, and then repeated at f/2.0 and f/2.8, which I’ll graph below. 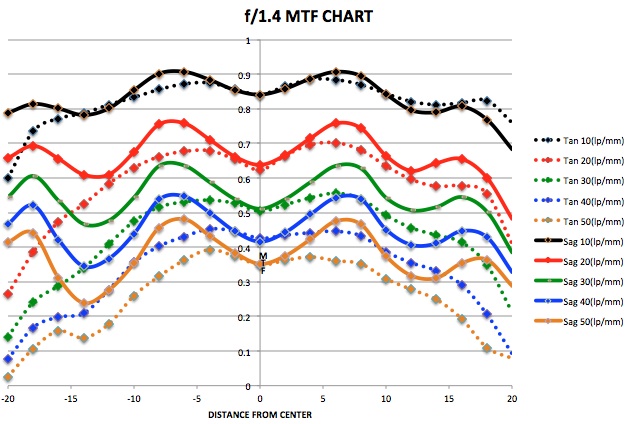 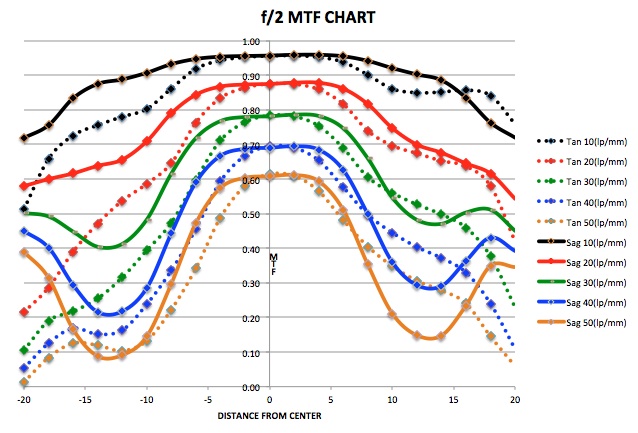 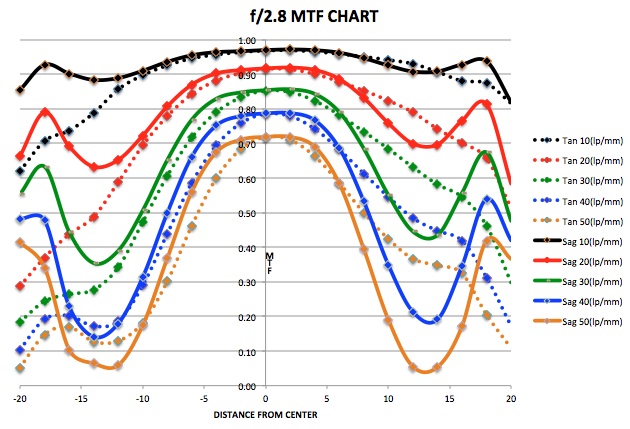 But hey, it was just one lens and weird things happen sometimes. So we tested another 5 copies. They were all the same.

So OK, maybe it was the Canon 35mm f/1.4 lenses. So we tested a batch of Nikon 35mm f/1.4s. They did the same thing, too. Well, that made it obious that something must be wrong with our machine. But when we had everything checked out and recalibrated, it was all fine. So obviously something must be wrong with our technique. So we redid the tests in a blackout room, then using just green light, then just blue light. Then doing sagittal and tangential tests separately. Then we did a full vibration isolation thing, slowing down the testing so that it took four times as long to make each measurement. Nothing mattered. Finally we asked the experts at Trioptics to look over our results and repeat the tests on a different machine in a different location. They got the same results we did.

Finally, at the suggestion of some consultants, we started testing field curvature (more detailed testing than the graphs we’re using for demonstration; actually measuring the distance in microns of best focus for each position across the test axis). What we found was in that area around 13mm where the sagittal MTF curves drop there is focus shift that is different from the overall focus shift. (Just to be clear, the 35mm f/1.4 lenses don’t have bad focus shift, it’s barely noticeable in photography, but it makes a difference in testing.) But if the center focus changed 3 or 4 microns when stopping down, the area around 12-16mm off axis changed about 6 or 7 microns.

That was enough to make the MTF curves softer at high frequencies. The big hint we should have gotten was that the sagittal MTF curves were dropping but not the tangential ones. Looking at the field curvature graphs, it’s the sagittal fields that have the complex curvature with the curve maximizing right at the point we saw the softening.

The bottom line is the MTF is lower because the area is more out of focus — when measuring MTF you determine best center focus and then measure every spot at that focusing distance.

You may already know this. I wish I had. It would have saved, oh, about 100 hours of our time. Just so you know, this doesn’t happen with very many lenses. But it does happen with most of the 35mm f/1.4 lenses and some other wide angles.