Well, we finally got a few copies of Zeiss’ newest Big Ass Lens, the 85mm f/1.4 Otus in Friday afternoon. I didn’t have time to do a whole lot with them other than take a few shots, and run them through the optical bench for MTF testing, so this will be a short post. (Assuming I get a little more time with them Monday before they ship out, I’ll add field curvature graphs as an addendum to this post.)

The summary is short and sweet: the Otus is every bit as good as it’s supposed to be, and the best 85mm f/1.4 lens we’ve tested. At $4,600 and 2.5 pounds of manual focus lens, we sort of expected it to be the best 85mm f/1.4 we’d ever tested. But still, life does like to chew up some tasty expectations and leave a pile of disappointment in the front yard sometimes. So it was nice to see the Otus 85 was as good as advertised. 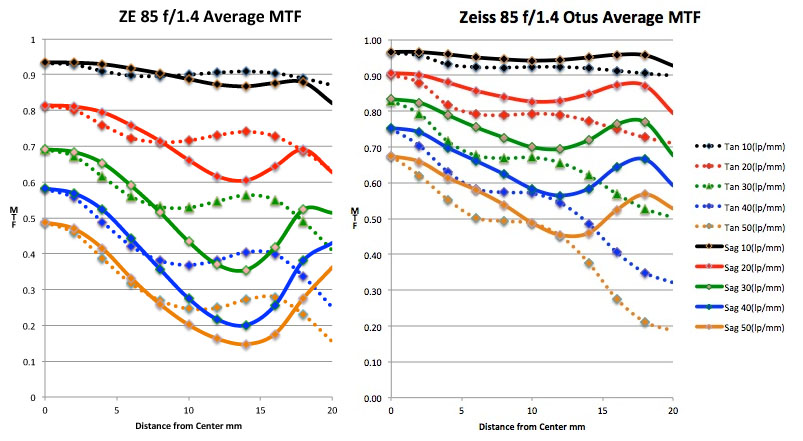 MTF curves for 5 copies of the Zeiss 85mm Otus compared to the standard ZE 85mm f/1.4

I put the original ZE 85mm f/1.4 MTF charts up for comparison, since it’s a nice middle-of-the-road 85mm f/1.4. You can make some more comparisons from our last article on 85mm lenses in general. And yes, I’m looking forward to seeing how the Sigma 85mm f/1.4 Art stacks up against the new Otus.

The quick summary is this is an amazing performance. Notice that the Otus at 50 line pairs / mm (orange lines) is about as good as the original ZE 85 is at 30 line pairs / mm. That really is amazing. But the performance difference is there at every frequency and at every spot across the lens field. If you want the sharpest 85mm money can buy, well, you have to buy the most expensive 85mm money can pay for.

We also checked variance on these copies. Again, I’ll use the ZE version for comparison since it’s a lens with very good variance numbers. As one would expect for this price, the Otus is even better than the ZE 85mm, meaning the difference between best and worst corner on the average Otus 85mm is quite small — too small to detect in a photograph or even with some pixel-peeping. 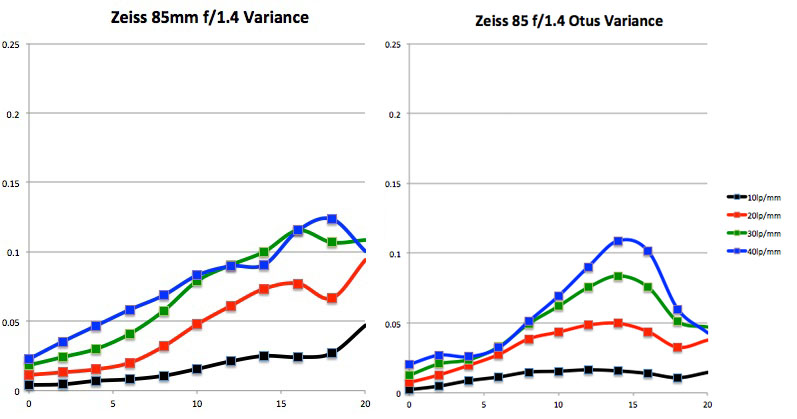 I’d love to have some profound conclusion here. But like the 55mm Otus, what we expected is exactly what we got: a very expensive, very large lens that is the best lens available optically in this focal length.

The Otus field curvatures are really remarkable, both tangential and sagittal are nearly perfectly flat. Below are the field curvature graphs wide-open at 30 line pairs / mm. The flattest we’ve seen so far on any lens.

Tweet
Posted in Lenses and Optics
Introducing LensRentals Keeper
About That 25-300mm f/2.8 You Wanted