When Zeiss announced the new Milvus lens lineup, there was a mixture of excitement and yawns. In part, I blame Zeiss’ marketing department for the yawns. OK, I shouldn’t be harsh. I shouldn’t, but I will. I’m certain a lot of people are perfectly comfortable just knowing that the new lenses will ‘redefine the limits of my creativity’ and provide me with ‘freedom to use the focus position as an artistic tool’ while having great ‘haptic appeal’. 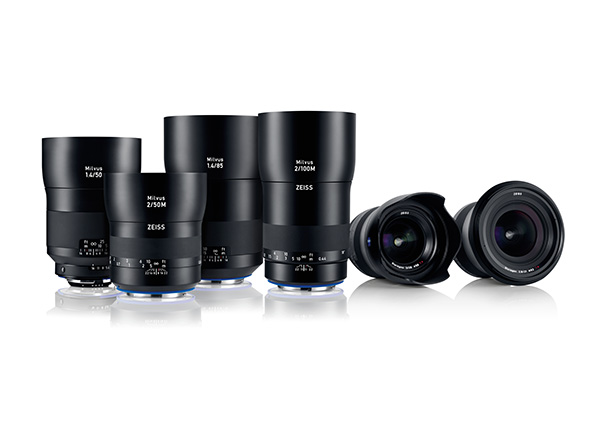 There’s no question the new housings are much nicer than the old ones. That certainly makes a difference in how the lenses handle. It might also make a difference in how much copy-to-copy variation there is since newer housings may allow more accurate assembly or greater ability to optically adjust the lenses. New optical coatings can’t hurt, and Zeiss has always done great things with coatings.

Me, I’m a geek, so I want to know things like are these really different than the previous lenses? We know that the 50mm f/1.4 and 85mm f/1.4 Milvus are completely new optical designs, replacing two of the lenses in the ZE/ZF lineup that really were due for an update. The other lenses in the Milvus lineup have new coatings and are in completely new housings. It doesn’t appear they have been changed optically, although I’m not absolutely certain they haven’t been modified.

We don’t have any method of quantifying the lens’ haptic appeal for you, and can’t provide you a numeric example of how much the limits of your creativity will be redefined, but we sure can put some of these new lenses up on the optical bench and see if there are optical differences we can detect. We expected to see big changes for the Milvus 50mm f/1.4 and 85mm f/1.4 lenses. We weren’t expecting to see optical changes in the other Milvus lenses when compared to their ZF/ZE predecessors but thought we’d double check by testing the Milvus 100mm f/2.0 Makro.

By now I think that most of you who read these articles know the drill: we tested 10 copies of each lens, each copy tested at 4 different rotations. Before starting the testing, we did trials with and without optical glass in the path of the lenses. The only one of the lenses that showed any difference with glass was the 85mm f/1.4. It was slightly better with 2mm of optical glass in the pathway and was tested that way. The others were tested with no glass since it made no difference in their MTF and it’s simpler to test without glass.

The new optical design of the Milvus 50mm f/1.4 is readily apparent when comparing it to the ZE/ZF 50mm f/1.4. The Milvus has a slightly better resolution in the center and maintains that resolution further out into the image circle than the older design. 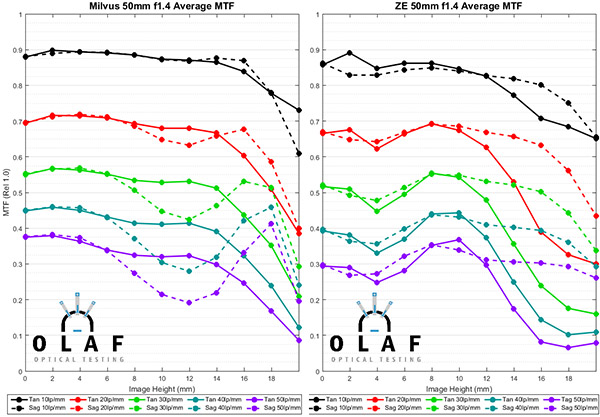 Just because I know someone’s going to want to call the Milvus ‘just as good as the 55mm Otus’ or something else silly, I’ll post that comparison, too. The Milvus is a clear improvement on the older 50mm design, but it’s just as clearly not as good optically as the Otus, either. 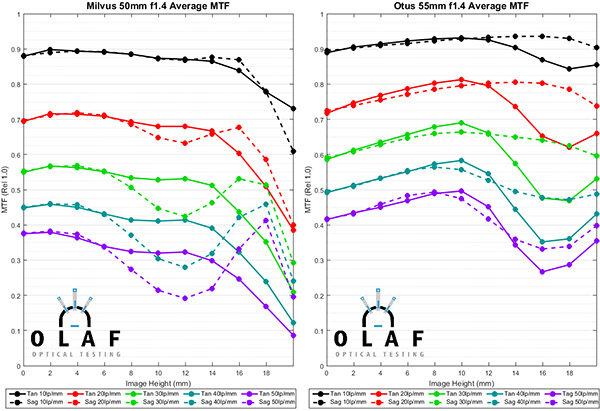 The new design for the 85mm lens shows a similar improvement. At the higher frequencies, the improvement is even more dramatic than it was for the 50mm lens. 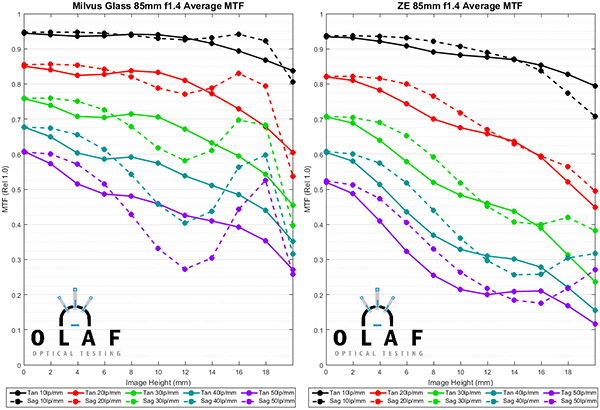 If I understood all of Zeiss’ release verbiage correctly, we would not expect any major changes in the MTF chart of the 100mm lens, and indeed, it is basically identical to the ZE/ZF MTF. The MTF graphs aren’t quite identical, but that’s nothing other than the slight variation we’d see if we tested another 10 copies of the ZE or Milvus and compared them to each other. 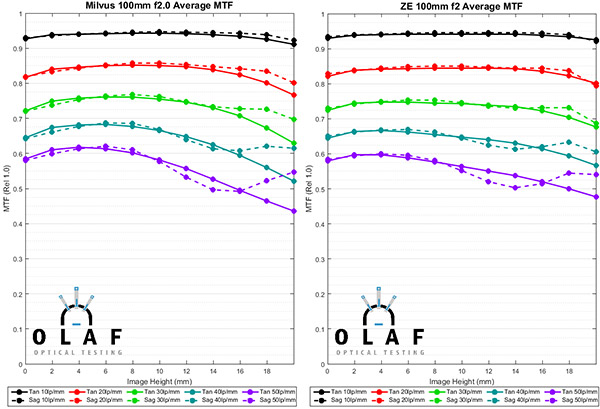 With MTF, we had expected to see some differences in the 50mm and 85mm lenses, but not in the 100mm, and that was indeed the case. With sample variation, we really didn’t have any expectations. The original ZE/ZF lenses were all quite good as far as having copy-to-copy consistency, but these are entirely new housings and that could make a difference in variation. 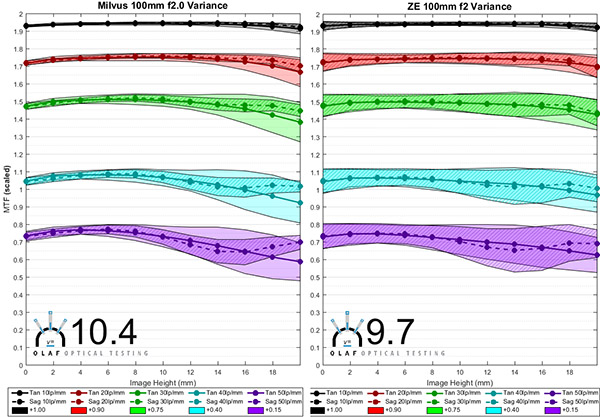 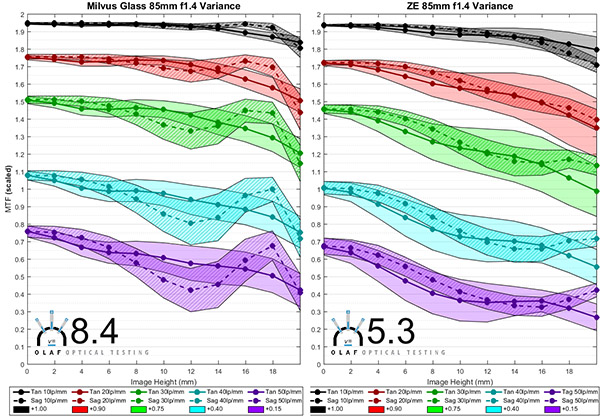 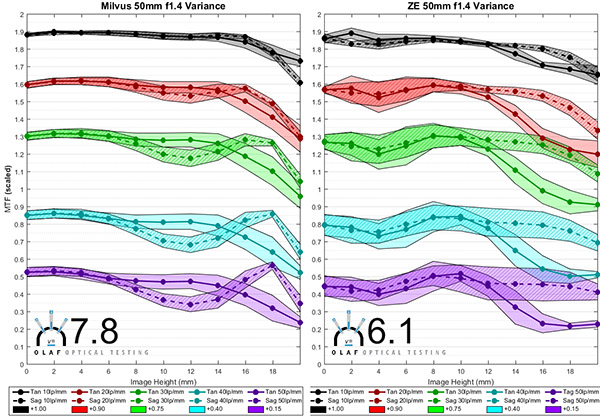 Remember the absolute numbers we use for the Consistency score are a very blunt tool and only evaluates the 30 lp/mm (green) variation. I encourage you to look at the actual graphs rather than just spout the number. But as far as the Consistency number goes, the Milvus lenses do seem to have slightly less variation (higher consistency number) than the ZE/ZF lenses. I can’t say if this is because the optical design is more tolerant, the optomechanical housing more consistent, or a combination of both factors.

Particularly with the 100mm and 50mm lenses, the graphs seem to show less center variation, which indicates center sharpness is very consistent from copy to copy. In both cases, the differences when looking at the graphs seem even more impressive than the numeric differences. The 85mm has the biggest improvement in Consistency number, but I think this sort of demonstrates the shortcomings of the ‘one number’ summary measurement. If you look at the graph, it is much more consistent at the lower MTF frequencies, but doesn’t seem much better at higher frequencies. Still, it is clearly improved over the ZF/ZE versions.

The new Milvus lenses are going to appeal to a lot of people because of their more elegant housing. I poked a little fun at the term ‘haptic appeal’ but I think it’s a very real thing and a lot of people are going to love these lenses for that. But that’s not something I can measure; you’ll learn a lot more about that from actual lens reviews and handling them yourself. Although I will say even simply setting them up for optical bench testing I love the feel of the focus throw. It’s remarkably smooth and precise.

Optically, there’s no question the new 50mm f/1.4 and 85mm f/1.4 lenses are improved over their predecessors. We’ll get around to testing the other Milvus lenses one of these days, but I expect they’re going to be pretty much identical to their ZE/ZF counterparts, just like the 100mm f/2.0 was in these tests. From an optical standpoint only, then, there’s no real reason to upgrade, Although as I said, there may be some very good non-optical reasons to do so.

Tweet
Posted in New Items
A Look into the Video Quality of the Sony A7sII
We’re Hiring!