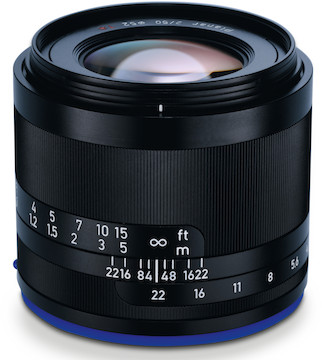 For quite a while now, some you have asked where the MTF results were for the Zeiss Batis and Loxia lenses, and my answer has been not done yet. There were a lot of reasons for that. Chief among these was the lenses are so popular that we can’t get as many as we want and keep them in stock long enough test them. There were also the issues we had modifying our optical bench for testing lenses with an electromagnetic focus for the Batis lenses.

So this arrives pretty late, way after most of you have made whatever purchasing decisions you are going to make regarding these lenses. But better late than never. With that in mind, though, I’m going to post all of our Batis and Loxia results in one place (here) just like we did in summarizing the Sony FE lenses so that it can serve as a reference.

One thing I will mention, because I think it acts as a good example. Unlike most manufacturers, Zeiss publishes measured MTF curves with their lenses, not computer simulations. When you ask me why my results are different from ones released by Canon or Nikon, I quickly say mine are real; theirs are idealized computer simulations.

When you ask me why my results are different from Zeiss’ results, the answer is that they are different measurement techniques. Some will have to do with various machines; Zeiss uses their K-8 and K-9 machines, we use a Trioptics Imagemaster vertical MTF bench. The light source is slightly different, for example. The Imagemaster uses a photopic light; Zeiss uses (I believe) a broader spectrum source. It may also have to do with the number of points measured, the number of samples tested, and a host of other things.

For example, we measure each lens at four different rotations, taking cuts from side-to-side, top-to-bottom, and from each diagonal, so each lens is measured at 84 points. The main reason we measure this way is that we’ve written software to give us an easy way to compare lenses to see how they differ. 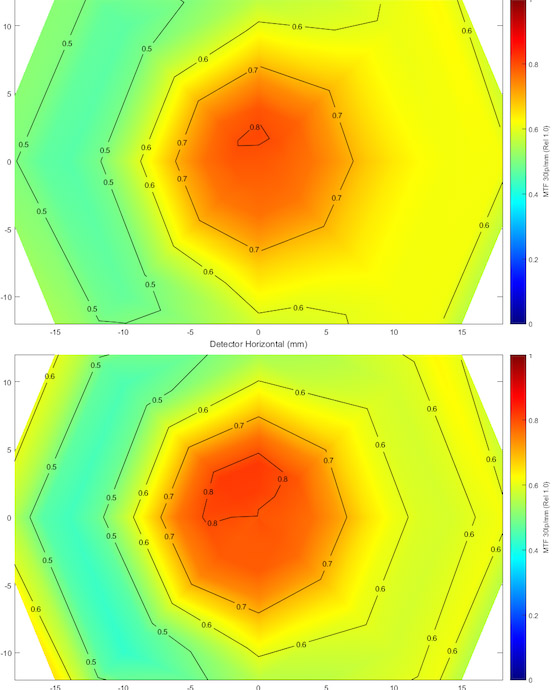 That may be a very different measuring technique from what Zeiss uses. Other differences are going to be our mount, which cuts the 20mm edges in some measurements, or the thickness of sensor glass utilized in the test. (I can only obtain optical glass in 1,2,3 or 4mm thicknesses, and the sensor glass is between 2.3 and 2.5mm thick.) This may make a slight difference, and more importantly, the amount of difference varies somewhat depending on the lens in question.

So why bother to publish this data instead of just letting you look at Zeiss’s data? Because Zeiss doesn’t test the other lens brands. If you want to compare MTF between, say, a Loxia and a Sony FE, then these are worthwhile.

Markus has written an excellent new piece of software that lets me put up side-by-side comparisons just by pushing some buttons. Since I want to play with my new toy, I’m putting each Zeiss lens MTF next to a Sony lens of similar focal length. Remember, though, that they are all measured wide open, so don’t look silly and say this f/2.8 lens is sharper than this f/1.4 lens. Because aperture. And, of course, if you want to compare these to other FE mount lenses, the MTF charts are here.

The closest comparison I came up with is the Sony FE 28mm f/2.0. It’s a fair comparison since they’re both f/2.0, although the Sony lens is far less expensive. The Sony does pretty well from a resolution standpoint in the center where it’s as good or perhaps a tiny bit better than the Batis, but away from the center, the Batis shines, maintaining its sharpness well and with little astigmatism. 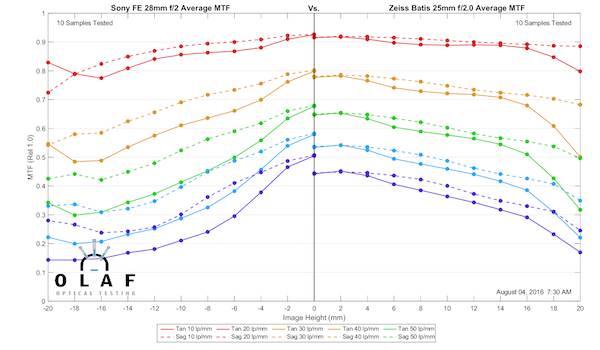 I chose the Sony 35mm f/2.8 ZA Sonnar as the comparison lens, so remember, of course, that it is being tested at a stop’s smaller aperture. The Loxia would improve stopped down to f/2.8. Even given its disadvantage, though, it’s apparent the Loxia 35 isn’t the fastest horse in Zeiss’s FE mount fleet. It’s an older design so we shouldn’t be too surprised at that. And yes, I know you’re all curious as to how much better the Loxia would be at f/2.8. So am I but time takes time, and I don’t have any right now. 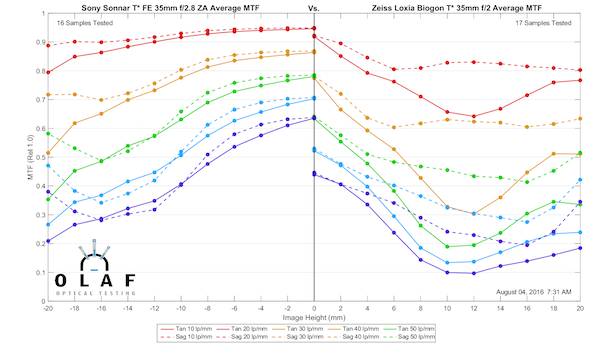 In this test, I gave the Loxia a full stop advantage by choosing the new Sony 50mm f/1.4 ZA as it’s comparison. On the other hand, the Loxia is considerably less expensive. Despite giving up that stop of aperture, the Sony ZA clearly has higher resolution. However, the smooth, fairly astigmatism-free MTF curves of the Loxia suggest it will have a very different ‘look’ that some people will prefer. 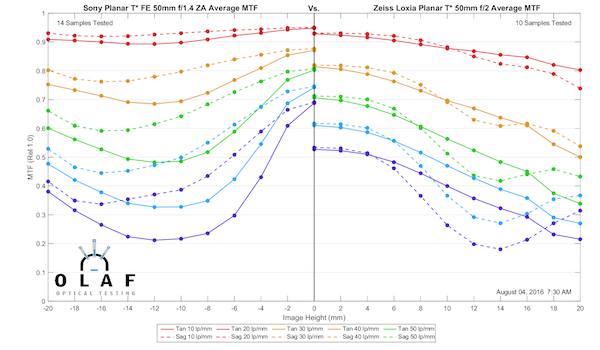 The comparison here is with the Sony 85mm f/1.4 GM lens, which is more expensive, but gives up some aperture. Even considering the aperture difference, the 85mm Batis puts in a most impressive performance. Excellent resolution and very flat curves across the field. It’s not an inexpensive lens, by any means, but its performance is most impressive. 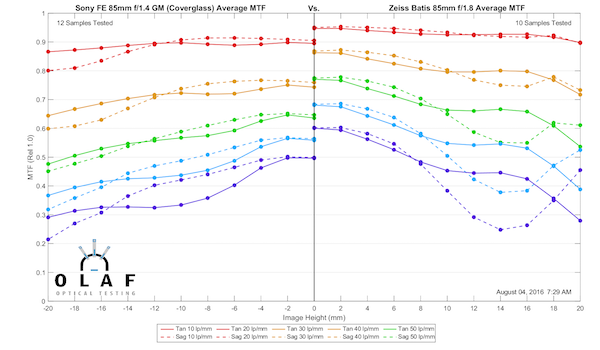 I haven’t gone into great detail about this set of lenses for one fairly obvious reason: they’ve been out quite a while and photographers who love them love the look of them and don’t seem anxious about what the MTF is like. I think this does show, to some extent, why the Loxia Biogon 35mm f/2.0 isn’t as popular as the other lenses, perhaps, but that’s about the most significant thing I see here.

I know some of you are asking where the results for the 21mm and 18mm Batis are, and the answer is ‘not done yet.’ I’ve made a solemn oath not to post data like this until we’ve finished ten copy sets, and those are still so popular that we haven’t finished testing yet, we can’t keep them in stock long enough. Stay thirsty, my friends (and patient).