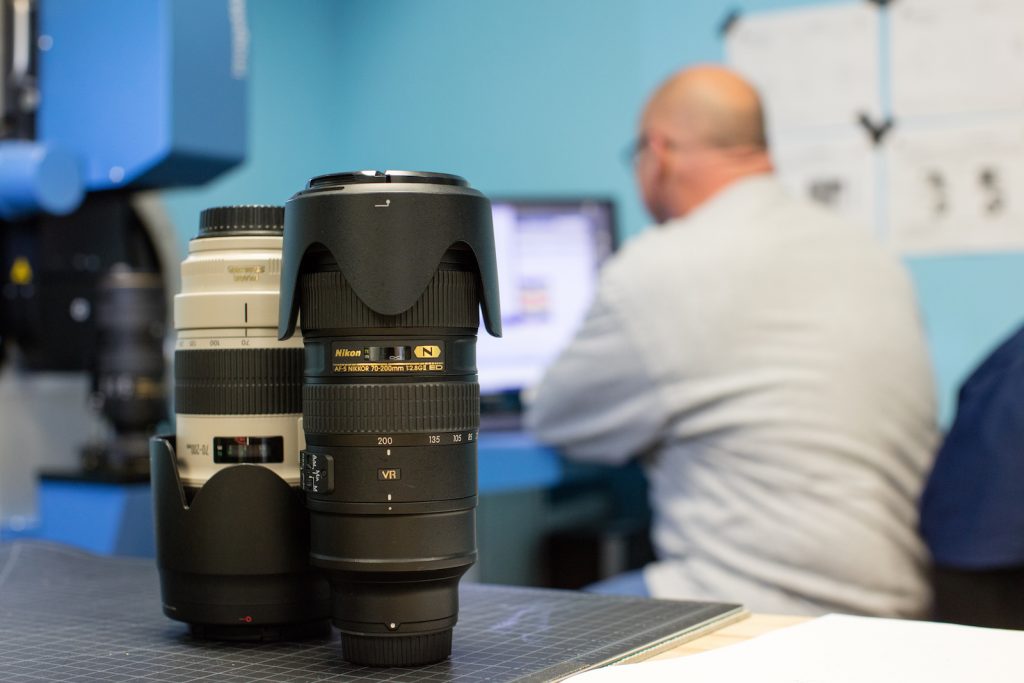 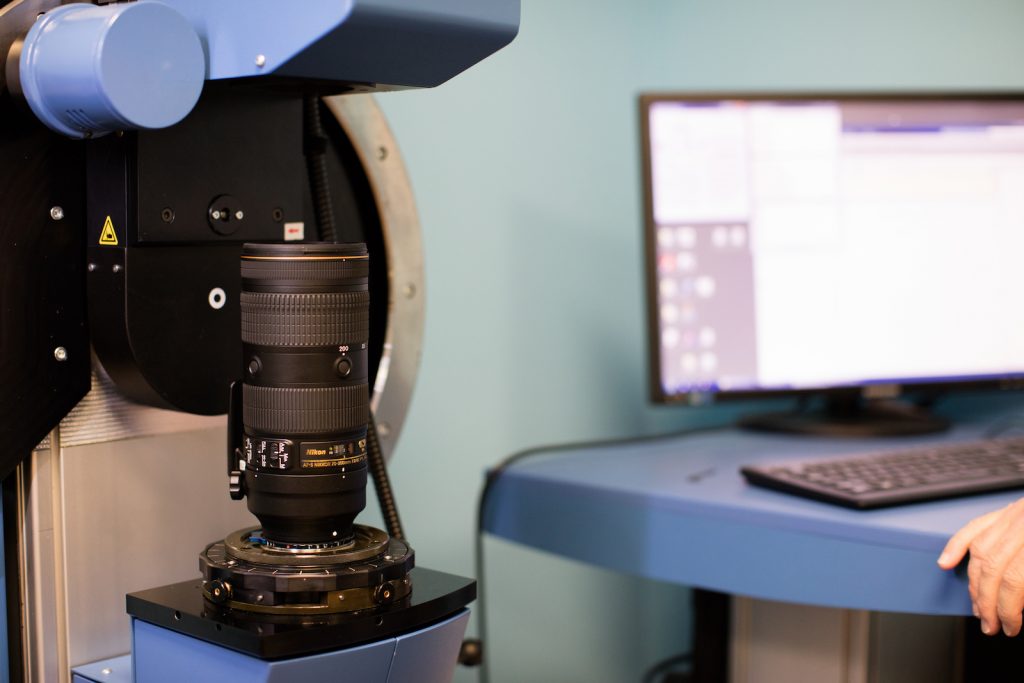 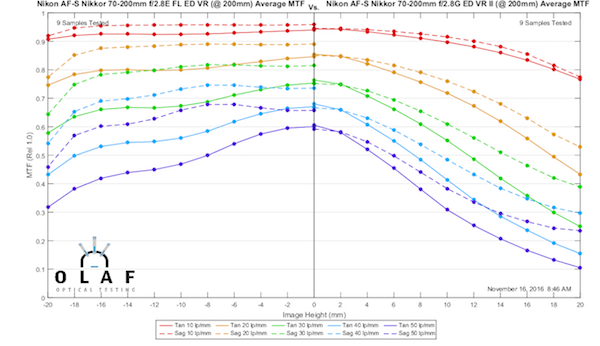 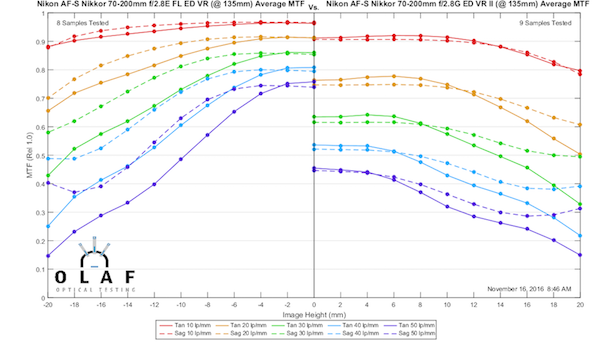 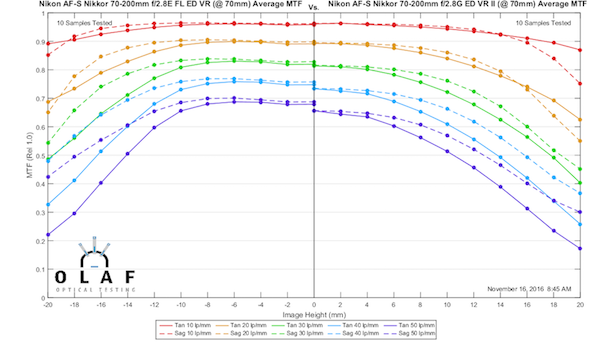 Well, we all want to call it the 70-200 VR III, since it replaces the Nikon 70-200 f/2.8G AF-S VR II.  But the new lens is officially the 70-200mm f/2.8E FL ED AF-S VR. It is most definitely a different lens; it’s 22 elements include one fluorite, one high-refractive, and six ED elements, along with new coatings. There’s also fluorine finishes on the front and rear elements to prevent smudging. I’m not a fan of this in general (they seem far more prone to coating scratches), but some people are. Not to mention it has electronic aperture control (of which I am a fan). And, of course, an improved 4-stop VR system.

So most of these improvements are things you’ll need to find out about in lens reviews, which this isn’t, if you’re considering upgrading to this lens with it’s Sonyesque $2,800 price tag. I’m just here to tell you how it performs on an optical bench, what it’s resolution is, and stuff like that. Maybe in a few weeks, we’ll take one apart and look into that ‘improved weather sealing’ claim. But for today, we’re just going to look at the optics.

I’m quite interested in how this lens performs. The VR II was an exceptionally good lens at 70mm, really rather weak in the middle of the zoom range, and then got superb again at 200mm. Nikon’s marketing department is waxing poetic about the improved optics of the new version, so I was pretty eager to see these poetic MTF curves for myself.

The 70-200mm VR II was at its best at 70mm, and the new lens is even better on the MTF bench, although just a bit. I doubt that anyone is going to notice much difference in their photographs, but they might see improved corner sharpness.

The 70-200mm VR II was at its worst at 135mm, and the new lens just mops the floor with it in the middle of the zoom range. It’s not just hugely sharper in the center; it’s sharper 2/3 of the way to the edge of the image than the old one was in the center. Now I know a LOT of people use their 70-200mm lens just as a 200mm lens, but honestly, if you ever visit the middle of the zoom range, you will notice this difference. It’s night and day.

The VR II was quite good at 200mm, particularly at the center. The new FL lens is perhaps a bit better in the center, but it maintains its sharpness much better as you go away from the center. Maintaining sharpness this well away from center is pretty amazing for a zoom lens.

I’m going to have to talk about this MTF curve a bit, because you may have noticed that the sagittal and tangential curves (dotted and solid lines) aren’t quite together in the center of the FL lens, which is unusual. The reason, in this case, is a bit of ‘off-centering.’ I’m not going to use the word decenter, because that implies optical decentering, which this isn’t, exactly. Rather the sharpest point at 200mm is, for most copies, not quite at the center of the image, but just a few mm (in sensor distance) from the center.

Remember, the graphs I show you are averages of 10 copies, each of which is averaged at four rotations; so the average of 40 MTF curves. If you look at a typical single rotation MTF reading they mostly look like this: 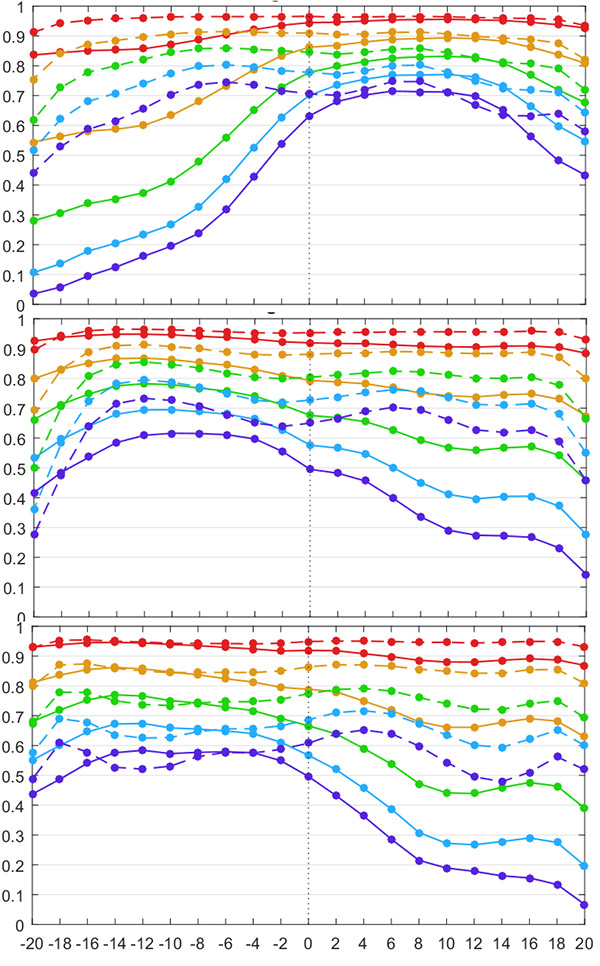 So technically, all of the 10 copies we tested were very slightly decentered at 200mm. But we usually think of decentering as causing a soft image, and in none of these lenses could the image be considered soft. It’s rather that the area of maximal sharpness was just a bit away from the center.

Because the sharpness is maintained so well from side-to-side, I very seriously doubt anyone could find that the center was a bit off-axis in a photograph in any of these ten copies. That doesn’t mean there aren’t going to be some that are significantly decentered at 200mm, though, because lots of lenses made. But again, decentered or not, they were all just damn sharp at 200mm.

I wanted to post the field-of-focus curves, for those of you who are interested in the geeky stuff, to show just how flat they are. Again, this would be good in a prime lens, but for a zoom they’re pretty spectacular.

This is one copy, but a very typical copy. And yes, most had a very slight field tilt at 200mm, but little or no tilt at shorter focal lengths. Again, you can harp on the negative, but for a zoom, this less field tilt is less than we expect to see. 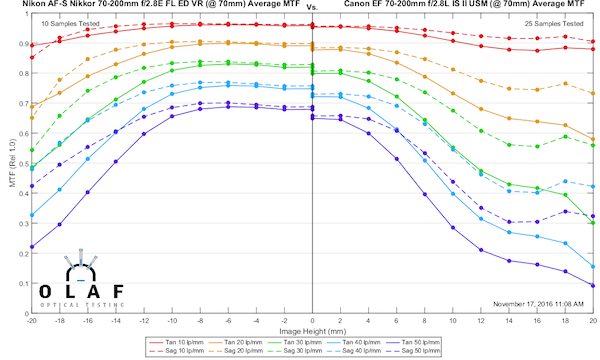 The new Nikon is a tiny bit better in the center but definitely is a bit better off-axis in the middle frame at 70mm. 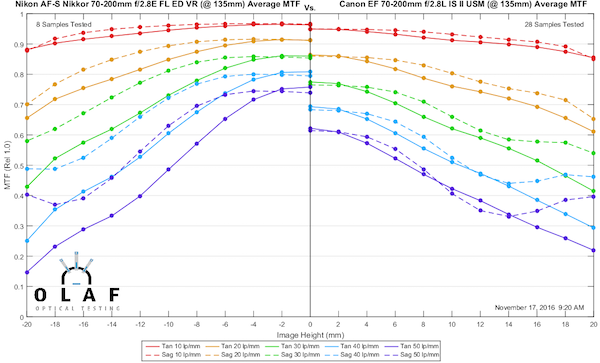 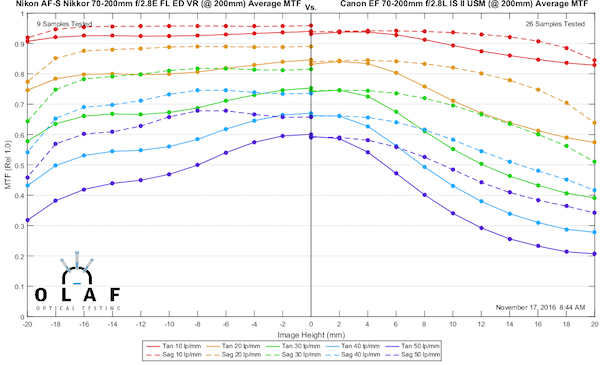 Despite the oddity in the Nikon 200mm graphs, I think the Nikon is clearly a bit better at 200mm. As always, let me emphasize this is ‘lab better.’ Actual photographs with all of the variables that introduce, I doubt the difference at 70mm or 200mm would be of any visible significance. At 135mm, though, I think they might be.

And as always, this has been an MTF test; it was only an MTF test. Had this been an actual photograph you would have been instructed that all differences were simply because of poor technique.