Tamron has a nice set of three f/2.8 zooms for Sony E mount cameras. Today I’m putting out MTF results for the 17-28mm f/2.8 Di III RXD and the 28-75mm f/2.8 Di III RXD. They offer a reasonably priced alternative to Sony-branded lenses, and Tamron has been making good products lately. I’ll admit to a bit of a soft spot for one of them; the old Tamron 28-75mm XR Di f/2.8 was one of the first lenses I owned when I got into photography, and I loved it.

The Di III RXD lenses are priced attractively ($899) and are reasonably sized (under 4″ long and under a pound for the 17-28mm; 4.65″ long and just over one pound for the 28-75mm). They’re smaller and less expensive than the Sigma E mount lenses, and less than half the price of the Sony GM lenses.

But, (and there’s always a but) we know, because we do science, that you usually get two of the three of cost, size, and image quality. We have a low cost. We have a reasonable size. So we expect average image quality. We also know, because humans, that people (including us) are hoping for magic, and we’re going to get low cost, small size, and great image quality. I do have some hope for magic here; the Tamron’s use hybrid and molded aspheric elements, which saves on cost. A few years ago, ‘hybrid’ and ‘molded’ meant ‘low-quality,’ but the technology for these has improved quite a bit. 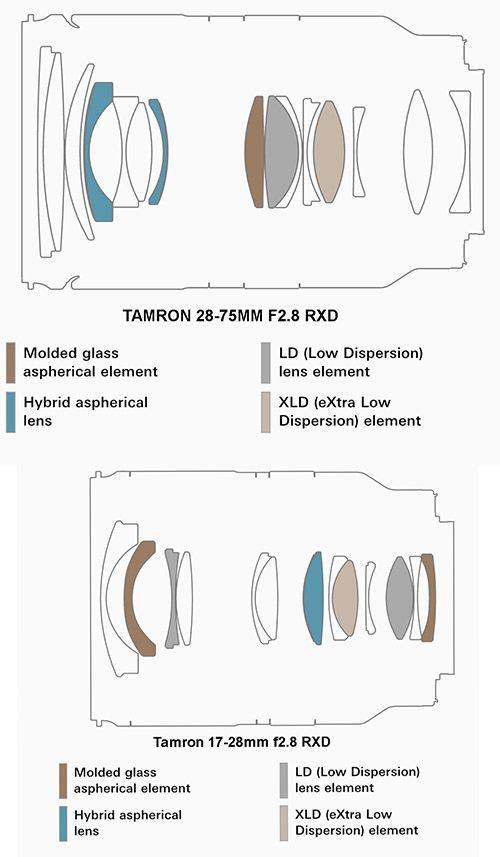 Let’s see how that quest for magic turns out.

Our practice is that 3X zooms are tested at both ends and the middle, while 2X zooms are only tested at the two extremes. (Before you ask, 10X zooms are not tested at all because I don’t have enough crayons and time to explain that yes, they really do suck that much. Don’t get me wrong. I travel with one sometimes; they have their uses, but high-resolution isn’t one of them.)

In the center at 17mm, this thing is ridiculously sharp. For a wide-angle, it maintains sharpness pretty well away from the center, but there’s a lot of astigmatism-like separation between sagittal and tangential lines. Some of this is because of lateral chromatic aberration (astigmatism and LCA have the same effect on MTF), but some are actual astigmatism. 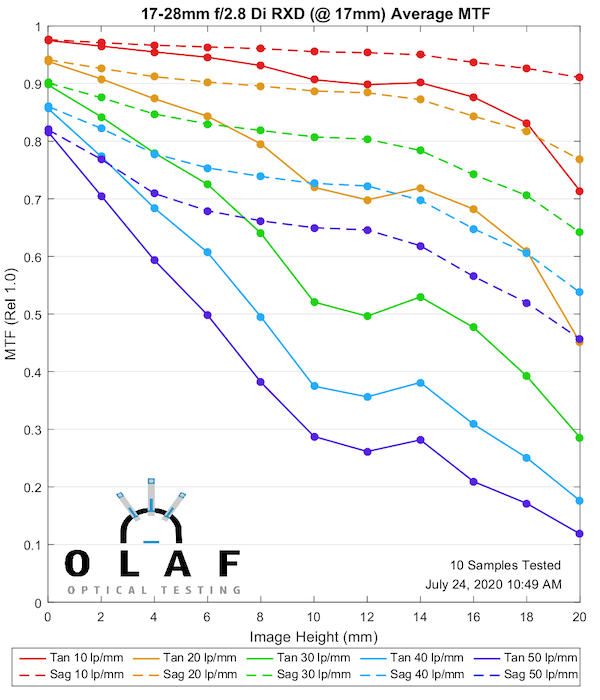 We lose some center sharpness at the long end, but it’s a reasonable trade-off. Astigmatism / LCA effect is completely gone at the longer end. 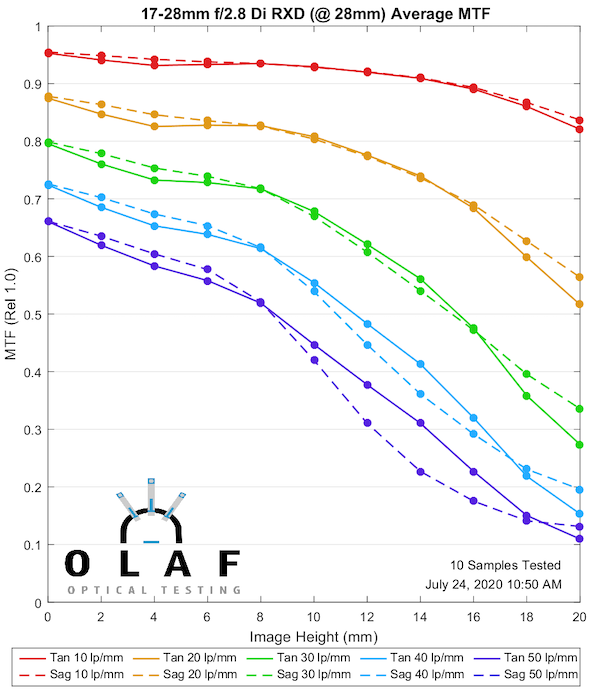 Overall, this is an excellent performance for an f/2.8 wide-angle lens, but that’s easier to see in some comparisons. We’ll start at the wide end.

This isn’t really a fair comparison; the Nikon is a much wider lens (wider is more difficult to design) and an older lens. Still, the Nikon is the first ‘really good wide zoom’ lens and remains a comparison gold standard. The Tamron is better at this focal length. 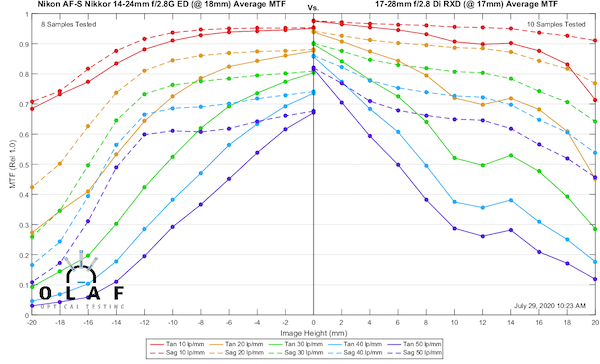 The Canon 16-35mm f2.8 III USM is a newer design and a similar focal length. Split hairs if you like, this is the internet after all, but I’d call this pretty damn even. Given the Canon costs more than twice as much, I’d call the Tamron a win here. 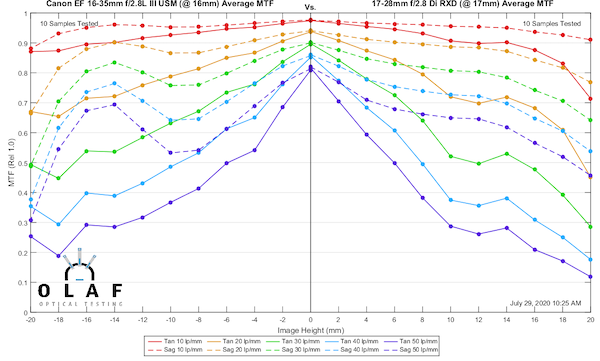 Of course, this is the crucial question for a lot of folks. How close can you get for half the money? The answer is pretty damned close. The Tamron is sharper in the center; the Sony has less off-axis astigmatism. This would come down to what you prefer or value the most. (Yes, I know it’s the money, but let’s check out the other end before you plop that down.) 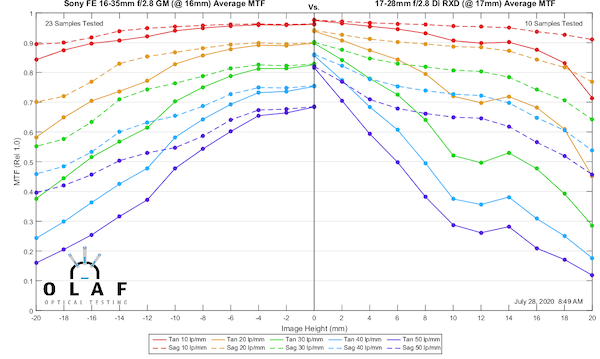 The Sony is at 24mm here, vs. the Tamron at 28mm, because those are the numbers I have on file. This is a pretty good showing for a lens at half the price. 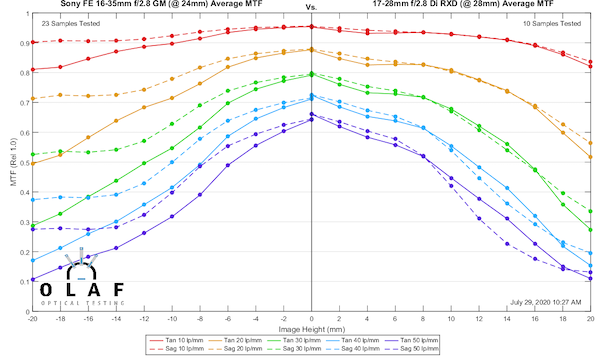 The Tamron holds its own against Canon’s similar wide-angle. 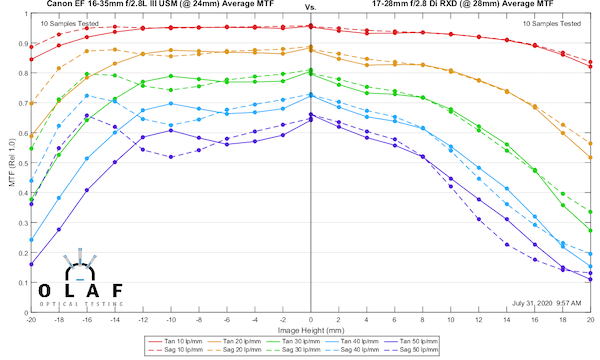 This being greater than a 2X zoom, we’ll do it at three focal lengths. 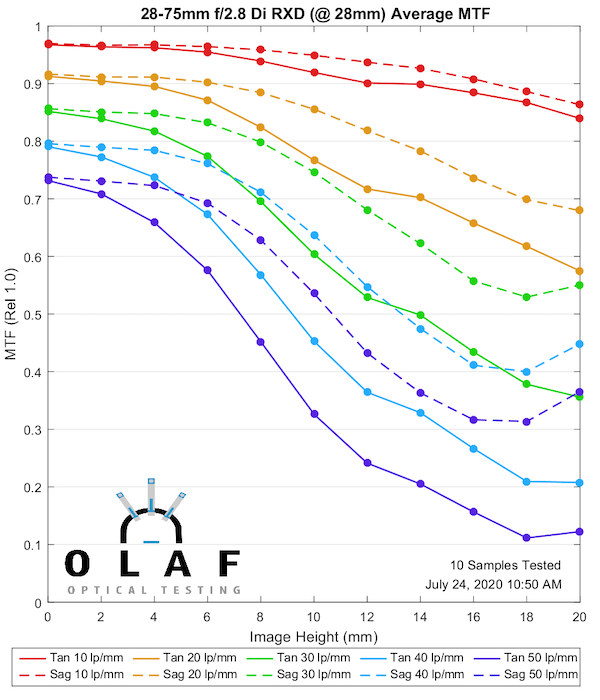 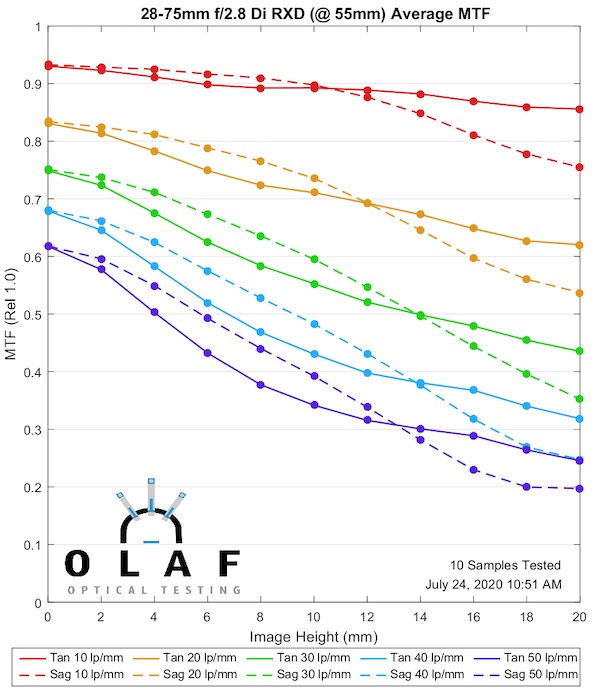 At the long end, however, the lens is quite average. Acceptable, but nothing that’s going to wow anyone.

I’ve stopped using the variation graphs very much because people abuse them so, but in this case, they help explain some (not all) of the weakness in the 28-75 as we leave the short end. First, let’s look (left to right) at the variation of the 17-28mm at both ends, and of the 28-75mm at the 28mm end. Don’t overread this; just look at the left side (the center) of each graph and take away that there’s a small range there. Not a lot of variance.

Now let’s look at the variance graphs of the 28-75mm f/2.8 at 55mm and 75mm. Looking just at the left side (center), you can see there’s a lot more variation. Since we’re showing you the average of 10 copies, well, there’s a pretty wide range of what you might see in an individual copy. Don’t get me wrong; none of them are ‘wow awesome’ at the long end, but some are pretty good, and some are kind of soft. 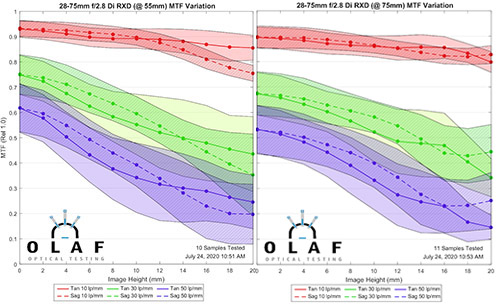 Before we get into complete comparisons, let me talk some of you down off the ledge. The 17-28mm, which was just great, probably set you up for some disappointment. The old version 28-75mm f/2.8 for SLRs was a very popular lens; as I mentioned, I carried it for years. This new lens is WAY better than the old one was.

Here are some old versus new comparisons; it’s obvious the new RXD smokes the classic old lens, as it should. It’s also clear that the old version also was weaker at the longer end. Despite this, back in the day, many of us found this a good lens, including me. (Granted, that was on cameras with lower resolution.) 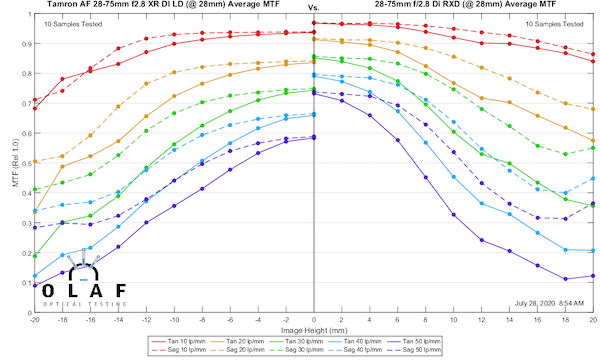 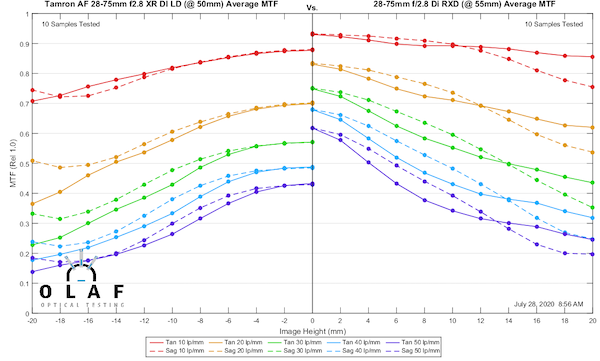 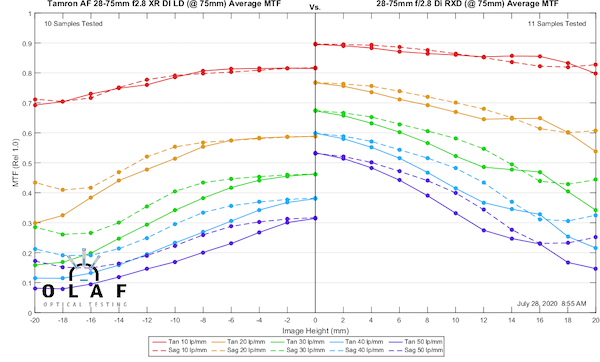 We have three focal lengths to compare this time, so I’m just going to do a couple.

This is not a ‘which will I choose’ comparison. Instead, I’m just trying to make a comparison to a widely known standard in this focal length.

The Canon is at 24mm and the Tamron at 28mm; make of that what you will. This is near enough to identical that I doubt you’d notice any difference testing them on cameras. 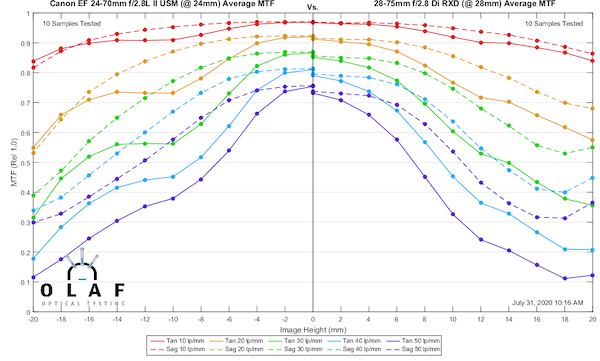 Like most 24-70mm zooms, both are a bit weaker at the long end, although the Canon clearly resolves better in the center half of the image. 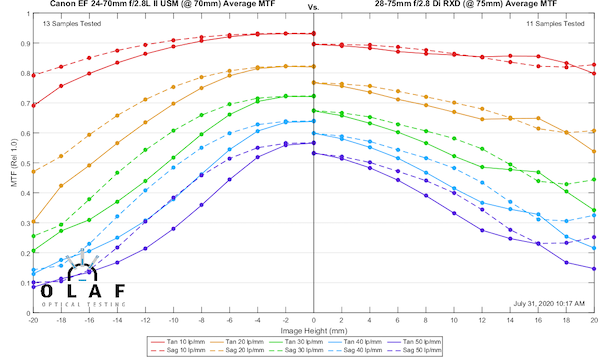 Let’s remember the Sony GM is more than twice the price of the Tamron and is at least as good as any 24-70mm f/2.8 made.

Slight advantage to the Sony here. 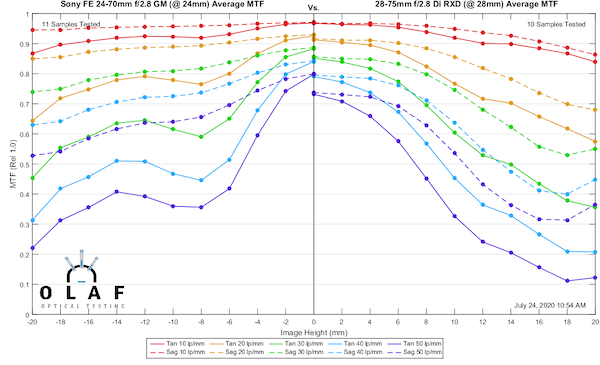 The advantage is more pronounced now. I will point out we pick ‘mid-range’ mostly based on the focusing ring throw, but the Sony is at 35mm compared to the Tamron’s 55mm. 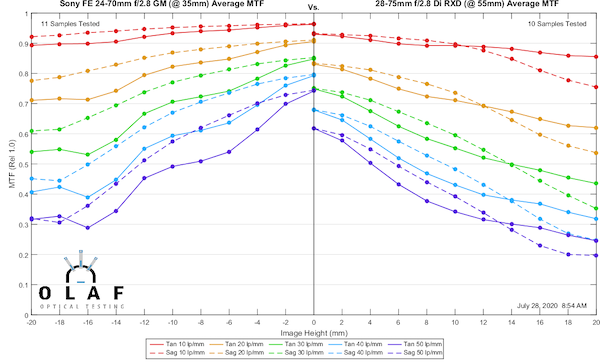 As with most 24-70 zooms, things are weaker at the long end for both or the more so for the Tamron. 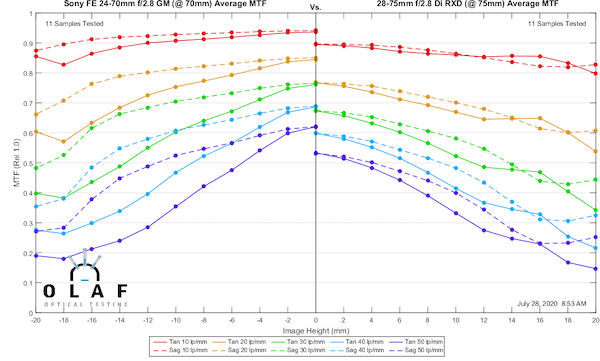 A couple of things, I think. First, from a resolution standpoint, the Tamron 17-28mm f2.8 Di III RXD is really good; amazingly good when you factor in price and size. If I was looking for a wide zoom in E mount, and 17mm was wide enough, I’d give it strong consideration. The 17-28mm, in particular, is about as close to magically violating the “price, size, optical quality” pyramid as you’re likely to get.

The Tamron 28-75mm f2.8 Di III RXD is good lens at a reasonable price. If I needed a zoom at this focal length and price was a prime motivator, it’s a great choice. I’d consider it more strongly if I also carried a 70-200mm lens or an 85mm prime that I could use at the long end. You could certainly buy this zoom and a good 85mm prime for less than the price of the brand-name zoom.

Some people aren’t going to be happy with the resolution at 75mm, at least wide open. But as a walk-around or vacation lens, I expect the vast majority of folks will consider it good enough at a bargain price. Let’s emphasize that in the comparisons, almost every lens I compared to the Tamron was at least double the price. From a pure resolution standpoint, it’s nearly as good as lenses costing double the price.

As always, this was a resolution test. It was only a resolution test. If you’re interested in these lenses, you’ll want to look at what reviewers have to say about all the other factors that should be considered. The one thing I WOULD take away from this resolution test, though, is there’s some very real sample variation at the long end of the 28-75mm. Some reviewers are going to have a good copy; some aren’t. So I expect you’ll see some differences of opinion among them.

If I carried the two zooms in my bag, I’d try to use the 28-75 rather than the 17-28mm at 28mm. Knowing which lens does what best is a big part of what makes these tests worthwhile. If you’re going to collect the whole set of Di III RXD zooms; hopefully, tests of the 70-180mm lens are going to show it’s a standout at 70mm, which would nicely cover you at that range.