These past few months have been strange, to say the least. With a global pandemic affecting millions of people around the world, each industry has raced to close down their events and schedule to keep themselves, their staff, and their community safe. Among these cancellations was the NAB show in 2020, which is one of the largest events of the year for video and broadcasting. The result of this cancellation, left a lot of people not hearing of the latest announcements of new cameras, lenses and other tools coming to the video world. So we decided to talk about it in this episode of the podcast, but let’s take a moment and talk about a few of the more interesting products in this post as well. Starting with the… 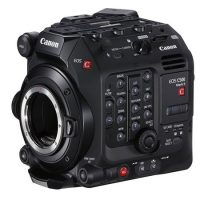 While the Sony FX9 was announced in late 2019, its actual release earlier this year was overshadowed by all the global news going on at the time, so it seemed fitting to talk about it on our new gear roundup. The Sony FX9 is the latest offering their full-frame sensor lineup of professional video cameras. With a new sensor, the FX9 offers 15 stops of latitude, with a dual base ISO sensor at ISO 800/4000. While the name mentioned 6K, the Song FX9 only offers 4K DCI out of the box, but that could potentially increase with a firmware update. Perhaps most interesting, the Sony FX9 offers a stabilization system that they claim will give you super-smooth footage even when shooting handheld when using Sony’s Catalyst software.

While the ARRI SkyLink isn’t a new product per se, it is new to our inventory, and worth mentioning in this piece for one reason – it’s our introduction into DMX controllers. What is a DMX controller? Well, it is a module that allows you to control all the settings of your lighting kit remotely, from either an app or base station. From power, color, and all the effects included, DMX is the standard in controlling your lighting while on set for videography. Our reluctance to getting into DMX controllers was because there are a lot of options, and each DP seems to have their own preference. Though the ARRI SkyLink is looking to become a standard, offering easy functionality for all ARRI SkyPanels through their app entitled Stellar, and so, we decided to jump into the DMX market, and we’re now carrying the ARRI SkyLink. 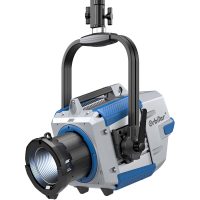 The ARRI Orbiter is something new from ARRI though, the latest in their high-end light fixtures. The Orbiter is an incredibly bright LED light fixture that is directional, tunable, and fully weatherproof. Offering incredibly high color rendition and accuracy, as well as a large variety of mount, The ARRI Orbiter is setting itself up to be an industry standard for high output lighting going forward – much like the SkyPanels became in their release years earlier. While we’re still on a preorder for these units, ARRI has said that the output is superior to a 2K Tungsten Fresnel…which is a lot of power.

Finally, the Shure SM7B. While this microphone is not new by anyone’s standards, it is a standard among a large variety of production work. However, the Shure SM7B has finally made it to our inventory, and we’re excited about it. This vocal microphone is a dynamic, cardioid-pattern microphone perfect for broadcasting and podcasting work (which of course, shout out…listen to this full podcast episode). As Ally, Ryan, and Zach mention in this podcast episode, the Shure lineup of microphones are always known for their durability, which makes it a perfect item to hit our rental inventory.

5:15 – FS9 vs FX7 and what we like better about the FX9. Sony still doesn’t make video lenses and Canon does, we’d like to see native Sony E-mount video lenses.

6:55 – Sony’s been more aggressive in lens development in an attempt to catch up to Canon and Nikon. They’ve done a good match photo wise, and third parties have help including Sigma.

8:10 – Next, the Arri SkyLink, the Lumen Radio Moonlight, and the Arri Orbiter.
DMX lighting, what it is, and why it’s so cool. Zach’s thoughts on these items as a portrait photographer, how controllers have changed the lighting game, and why it seems cumbersome to get into DMX products. The biggest selling point wouldn’t be only control of your light, but the main difference is being able to program live and opens up easier ways to change lighting live.

17:00 – Sony PXW-Z750 4K which we got in house unexpectedly early.
An explanation of rolling vs global shutter

23:20 – Blackmagic Design ATEM Mini HDMI Live Stream Switcher and the Blackmagic Design ATEM Mini Pro HDMI Live Stream Switcher give the user the ability to control the BM over HDMI when using the pocket camera 4k or 6k. So if you had 4 cameras on a shoot you could use the a-10 to tailor each camera instead of relying on separate operators, ensuring all the cameras are equally matched. A big advantage of the Pro over the standard Mini is having a multi-view output.