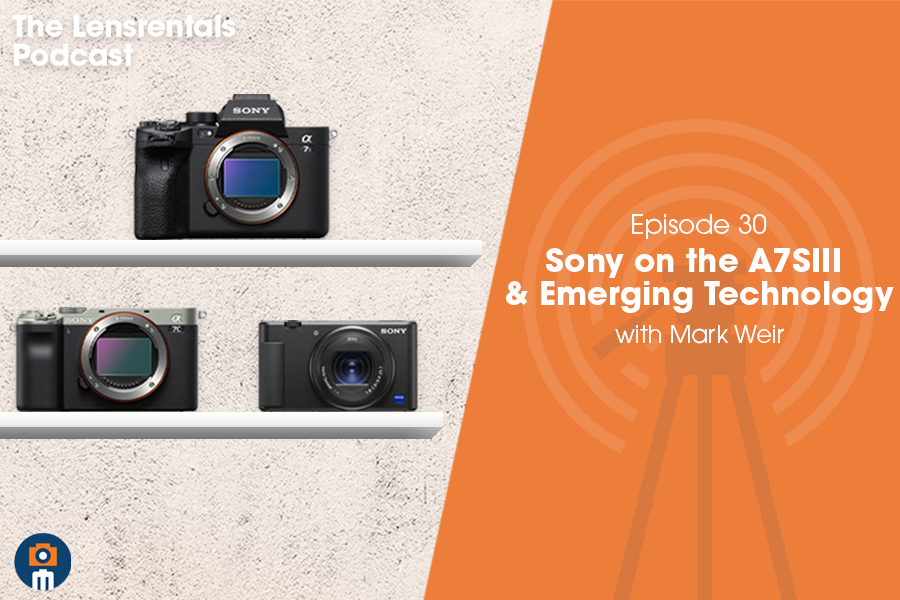 Sony on the A7SIII and Emerging Technology

Roger Cicala, Lensrentals fearless founder along with our Blog Editor, Zach Sutton talk with Mark Weir, Senior Manager in Technology and Marketing at Sony about three newly released cameras, the A7SIII, A7C, and ZV-1. Roger reveals he actually gets excited to see what’s different when Sony releases updated versions of gear, because there are actually differences, not just new coats of paint. Sony has taken full advantage of being a vertically integrated company when making their cameras and lenses. This shows up in how they mold specialty glass when a lens needs it, to making their own sensors, to having the chutzpah to not be afraid of trying new things that other companies may be hesitant to dive into, it all really does make a difference.

The History of Sony Cameras

While Sony’s involvement in the photography world is not new, it is new compared to other manufacturers’ standards. Canon debuted into the market back in 1937, Nikon, even earlier in 1917. So with that scope in mind, it’s pretty fascinating to learn that Sony entered into the professional camera scene back in 2006, with the introduction of the Sony alpha line on June 5th, 2006.

Though that info is a bit disingenuous when you look at all the information regarding Sony’s start into the photography world. Sony’s introduction into the professional photography world would come in early 2006 when they acquired Konica Minolta’s photography operations. Prior to that, Sony had focused their attention on their prosumer line of point-and-shoot Cybershot cameras, though their first official camera was the Sony Mavica in 1981. 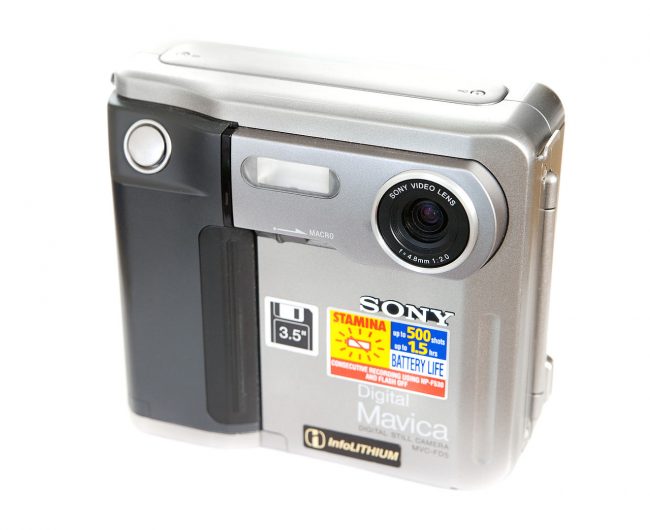 The Sony Mavica was a spectacle by all accounts, using removable disks (originally Mavipak 2.0 disks, and later to 3.5″ floppy disks when it transitioned into digital photography) branded as the world’s first electronic still camera. The digital Mavicas of the 1990s were exceptionally popular at the time of production, and for many, solved the problem of getting photos onto your computer. That’s right, in the 1990s, one of the biggest struggles people were faced with was how to digitalize your photos. Often you would need a scanner, which would often produce less than stellar results. Sony’s solution to this problem was simple, by offering a recording format that would be easily used by most users – 3.5″ floppy disks.

Back in the 1990s, cameras didn’t have nearly the resolution they have today. Most of the floppy disk-based Mavica cameras offered resolutions of 0.3 megapixels – allowing you to fit ten images on a standard 1.4 MiB floppy disk. Eventually, the Mavica system transitioned to using 3″ CD-R discs, allowing for 156MB of storage (~1,300 640×480 images).

Eventually, however, Sony made the push into the DSLR market, with the introduction of the Sony alpha series back in 2005. Starting as purely DSLRs (such as the a200), these systems used the Minolta AF lens mount, which Sony-branded the A-mount. Sony’s push into the DSLR market was aggressive for their first couple of years and was able to gain a 13% market share in just three years, making them the third-largest DSLR manufacturer, behind only Canon and Nikon.

But by 2010, Sony had grown tired of the A-mount, and was ready to jump into their own mounting platform. With the launch of the NEX camera systems, Sony also launched the E-mount, which is what is still used today. The NEX system was Sony’s jump into the mirrorless platform, offering a more compact platform to their DSLR line, with some of the professional features stripped out. But it wasn’t long before Sony was ready to bridge that gap as well. 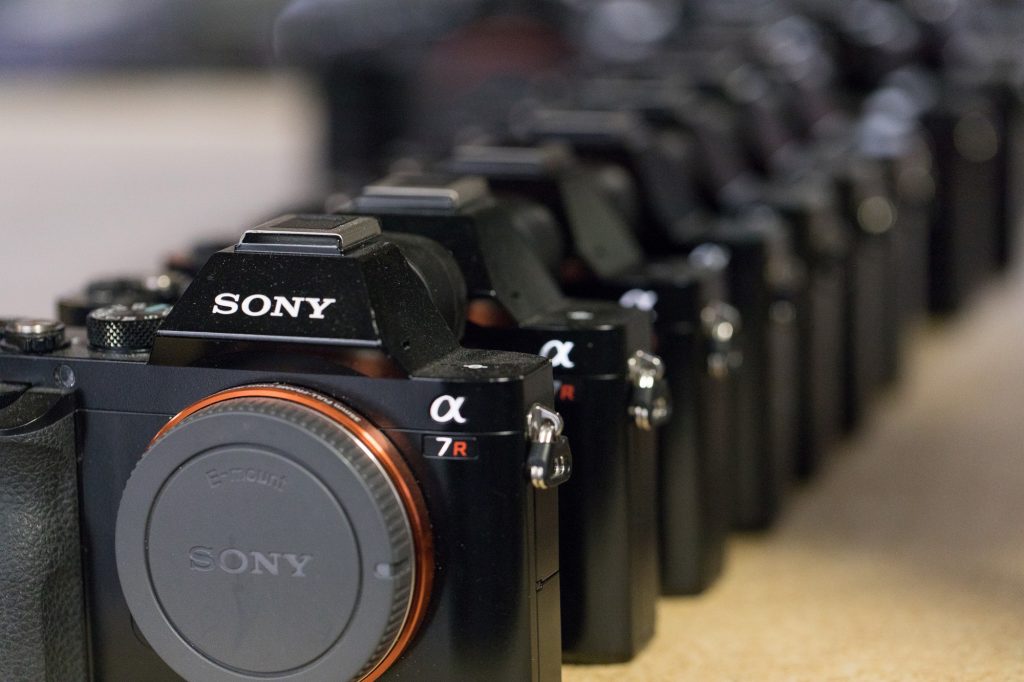 By 2013, Sony was done testing the water with the professional photography industry and was ready to make a full push into the market. That push came in October of 2013, with the announcement of the Sony a7 and Sony a7R. The announcement of these cameras sent shockwaves through the photography community – offering all the specs to compete with the high-end Canon and Nikon platforms, but in a system about 1/3rd smaller in size and weight.

And since the announcement of the Sony a7/a7R, Sony hasn’t slowed down on their aggressive approach to camera development. With nearly annual releases of these cameras, and dozens of lenses quickly developed for the E-mount platform, Sony has surpassed Nikon in market share, and is the second-largest professional camera manufacturer in the world.

The Sony alpha platform is currently built into three different segments – the a7, a7R, and a7S. The R moniker signifies resolution, and are generally used as their professional stills cameras used in studios and other environments that might need the high megapixel count. In contrast, the S moniker is for sensitivity and are generally lower resolution cameras with exceptional low light performance. They’re also used predominately for video. Listen to the podcast above, where we talk about the history of Sony Cameras with Mark Weir, who has been there from the beginning.

Gear mentioned in this episode:

1:20 – Today Roger Cicala and Zach Sutton are talking with Mark Weir from Sony. Mark began his time at Sony in 1986 and worked in audio until ’99 when he made the switch to the imaging arm of the company. The company was branching out from making camcorders and starting to make film cameras.

3:30 – The much anticipated A7SIII camera was rumored in February, announced this summer, and is rolling off shelves currently!

6:00 – The A7SIII is a 12mp sensor, which has Zach asking the eternal question, how much does resolution matter?

7:00 – Sony is also a primary manufacturer of image sensors and that gives them the flexibility to realize cameras that other companies may not. Mark explains that the 12 megapixels in the A7SIII allows the S-series to maximize the pixel well size for dynamic range and high sensitivity, and to have dot by dot readout without the need for pixel bending, line skipping, or even oversampling.

8:00 – One of the great advantages of having just the right number of pixels is you can get data off the sensor very rapidly which can be a huge benefit. Not only for rolling shutter reduction and for auto-focus performance.

10:00 – Sony A7C mixes the quality and advantages of a full-frame sensor with an especially portable and sleek body design. Key features include a 24.2MP Full-Frame Exmor R BSI Sensor, UHD 4K30p Video with HLG & S-Log3, and a 693-Point Hybrid AF System, retailing for around $1800. The A7C has been “miniaturized” as Sony prefers to call it, for those who are looking to buy a full frame camera but want something even lighter, smaller and cheaper than the A7SIII. The A7C is a small full-frame camera available with interchangeable lenses, a mechanical shutter, and in camera image stabilization. A great option for content creators who want their set up to be compact and light and also are not willing to sacrifice full-frame capability.

15:00 – Sony listened to the feedback from content creators about how they wanted the image focusing to work and worked to answer this need with the ZV-1’s ability to track objects and faces at different rates of speed, helping solve a classic vlogging frustration.

17:20 – Roger wonders if Sony is headed toward a three-pronged line up with its cameras, from dedicated performance cameras, to video-centric, to base cameras that are good all-around cameras.

20:00 – Famous for not wanting to adopt the first version of new tech and waiting to see how it develops, Roger admits Sony blew that assumption out of water and wonders if they can keep up the pace they’ve had over the past few years.

21:40 – With so much in-house development, Mark says Sony enjoys a big advantage which allows them a lot of flexibility. Roger agrees and reveals that when a new version of a lens or camera comes out, it’s not just essentially a new paint job, there have been actual developments made.

23:00 – Roger notes that Sony was among the first to come out with linear electromagnetic focusing motors when other companies seemed unwilling to try to manufacture them. The shift away from the optical-mechanical cameras to “solid-state” camera that relied less and less on moving parts has been a big driver in mirrorless and has been a challenge, but one they’ve worked on diligently.

25:10 – Roger’s enjoyed seeing how Sony lenses have evolved and learned and grown, and gets excited to discover things he’s never seen done before in lens development. Mark gets into the technical side of how Sony has had to create some of the technology they’ve wanted to use because it didn’t exist until they made it.

30:10 – Alright, enough of the technicalities! We heard Mark is a beer snob-ahem-aficionado, so Zach investigates!