How Josh Hasty has Carved His Corner in the Horror Genre

We rent out a lot of stuff, actively work as an intermediary to your creative projects, and get you the gear to help bring your vision to life. Every now and then, we get wind of the project you’re working on and think it’s worth promoting to our blog readers. We highlight these in a series we call Customer Stories.

In the past, we’ve spoken with Brady Kenniston has he photographed a SpaceX launch, chatted with Brett Stanley as he walked us through his process of photographing scenes underwater, and discussed Jaime Harmon’s isolation portraits during the height of the Covid-19 pandemic. I recently sat down and chatted with Josh Hasty, who has been working to create his place in the horror movie industry while working with some of the industry’s greats.

Josh Hasty is an award-winning filmmaker most notably known for his cult favorite film Candy Corn and his documentary film highlighting the work and production of Rob Zombie’s work entitled In Hell Everyone Loves Popcorn. As a customer of ours for several years, we were eager to finally sit down with Josh and discuss his creative process and inspiration as he creates fan favorites in the horror community. 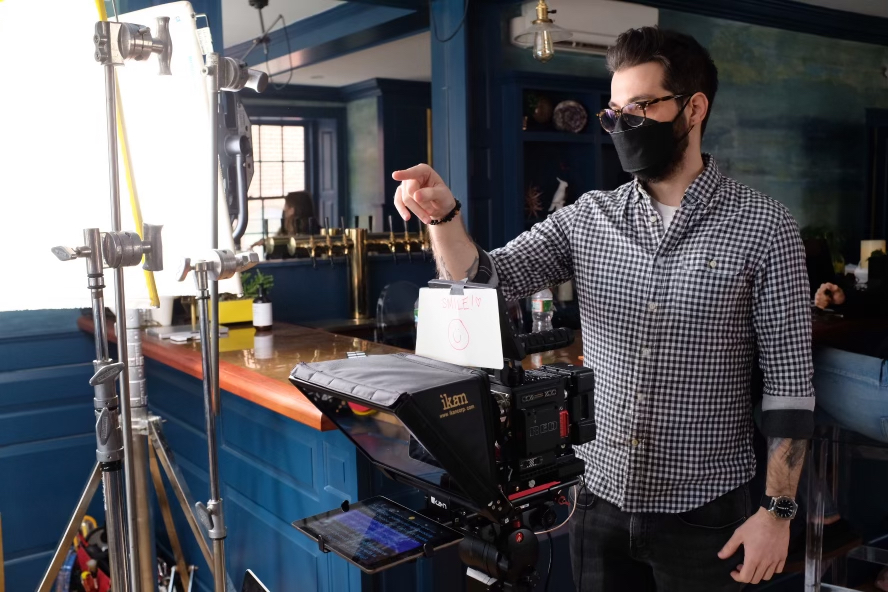 Getting his start in filmmaking, Josh has always had his interests set in the horror genre. “Horror is something I’ve always been very passionate about and loved for as long as I can remember. And so I started out doing little shorts with my friends. Growing up in the middle of nowhere Ohio really inspired me to create something that not anyone else in my area was doing.” Josh tells us.

But Josh’s professional work in the genre was actually started through a series of haunted attractions, entitled Scaredown. In 2011, Josh’s independent film work got some attention in his Ohio community, and he was brought on to help create a series of haunted attractions during the Halloween season. For three years, Josh worked to develop some of the most notoriously terrifying attractions that went on to win several awards. “I loved haunts, and I love that whole world. So I started working on that, and in just three years, our one attraction quickly grew into three on this six-acre farm in the sticks of Ohio. From there, I met Rob Zombie’s bass player Piggy D, who thought the promotional videos I was shooting for these haunted attractions were cool.” Josh tells us. “That opened the door to connect with more creatives and more short films. Naturally, that snowballed into more things and allowed me to work with Rob Zombie.”

BTS Shot of the filming of In Hell Everybody Loves Popcorn. Photo by Gene Page

As you might have made a note of already, Josh’s formal training in filmmaking is limited. Accrediting his knowledge in the field through his own hard work and watching documentaries – one being documentaries following Rob Zombie’s directorial work – Josh was able to highlight his previous work and get the opportunity to work with Rob Zombie, filming a documentary highlighting the production of Rob Zombie’s 31.

“That got me into a room where I could start meeting other creatives on another level. The set of 31 was the first real film set I had ever been on, so it was really learning a lot and meeting so many people,” Josh explains. “Meeting all these people burned like a fire for creativity, and we ended up starting the creation of Candy Corn.”

Speaking with Josh, I immediately noticed the calming candor in his voice, and so it was no surprise to know that he also hosts the Transcendental Meditation & Creativity at The David Lynch Foundation L.A. “I really struggle with anxiety and depression, and there are all these different things people tell you to try and do. Eventually, I felt like ‘this is the life of an artist’ and you’re just going to be alone and depressed, and it’s romanticized in a sick way.” Josh explains. But then he found transcendental mediation, and his perspective changed. “I’m a huge fan of David Lynch, and you’d see people like him, specifically him, creating this weird, dark, and disturbing stuff, but he’s known as being this super positive and happy person. And he credits that to meditation, specifically transcendental meditation.” Josh tells us. From there, Josh decided to give it a try, meeting with an instructor and building his mantra. “After transcendental meditation, you have an amazing cleansing of the mind and its compounding. It just helps me focus and not get overwhelmed, and it helps me be more creative.”

BTS Shot of the production of Candy Corn. Photo by Justin Wysong

Through the use of transcendental meditation, Josh has been able to think more precisely and creatively. A calming sense has helped him deal with criticism and an ambition to create the ideas that have been sitting in a box in his mind for years. Josh credits his success to TM, allowing him to create his first feature film Candy Corn, even after a multi-year struggle on direction and production of the film.

As for Josh’s relationship with us, we were happy to see he was really happy with the gear we were able to provide for him in his productions. “I found out about Lensrentals.com, and the prices were significantly cheaper than the other place I was using. I placed my first order, and within an hour, I got a call from Lensrentals, asking about the product I was shooting, and making sure I had everything I needed.” Josh tells us. “I rented a Canon C100 to do the press for Rob Zombie’s 31. He brought my partner and me on tour with him for a couple of weeks and we shot theatrically released interviews and Q&As that played after the movie.” Josh tells us. “I rented several things throughout the long and crazy production of CANDY CORN. Everything from batteries to lenses, Ronin, and other odds and ends.” As for what Josh is currently working on, we can’t provide many details, other than he has now upgraded to RED Gemini kits.

Are you doing something with our rentals and creating cool projects that you think should be featured on our blog as Customer Stories? Feel free to reach out to us!