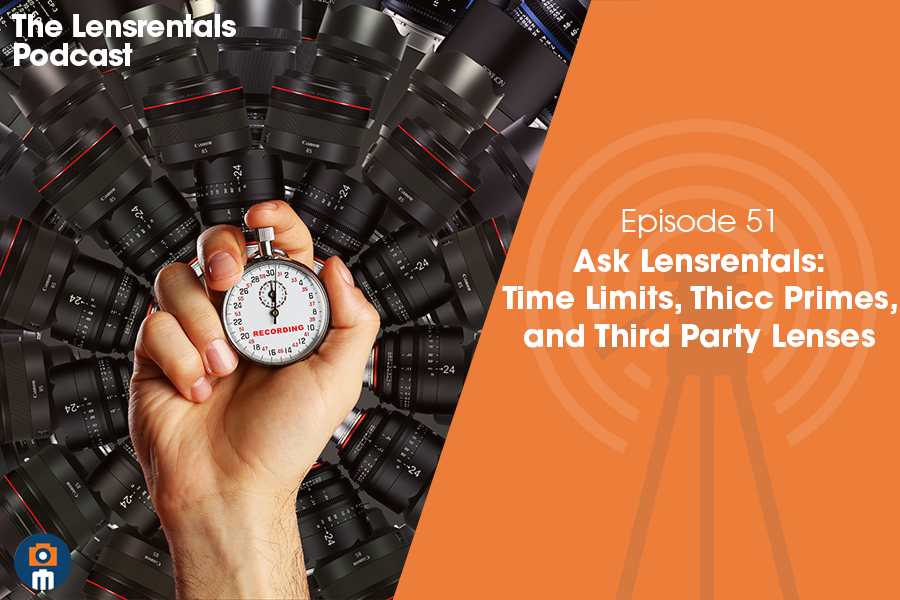 Welcome back to one of our favorite types of episodes where we’re answering more of your questions about all things relating to photography and cinematography. Ryan is joined by Joey, who will be answering photo questions and for all things video we’ve got one of our video producers here too, Dom is back! We’ll cover everything from the history of Lensrentals, to why it’s so hard to find a decent video camera that shoots decent stills.

These episodes are among our favorites to record, as it involves answering questions from the listeners. In today’s episode, Ryan, Joey, and Dom talk about balancing photography with videography jobs, discussing the film era verse the digital era, and where Lensrentals.com plans for more things lighting in the future. Listen in as some of our most knowledgable staff answers questions from you the listener. And as always, if you have a question or suggestion for a future episode, feel free to chime in by filling out our form.

0:55 – Our first question is from Cole who asks, “In regards to camera rentals do you notice a higher interest in the latest technology or do customers stick to what’s been around for years?” Dom starts by explaining the obvious, there’s always a portion of the latest gear rentals going out to people who want to try before they buy, very often when someone is contemplating changing systems. And past that, the annoying but honest answer is, it can be all over the place.

3:00 – Next, Christian wants to know, “Why is the Sigma Art lens line so popular with photographers and videographers alike, and how can Canon, Nikon, and Sony compete?” Between often being cheaper than the main manufacturer’s offerings with the same if not better quality and offer options that the big brands don’t have, Sigma has really found their niche in the Art lenses.

4:00 – Then we start sizing up the Sigma Art lenses vs Canon, starting with the Sigma HSM Art 85mm f/1.2 DG. Dom points out that the actual focus ring area is “enormous” and that the feel and even weight can be an asset for some people. The Sigma 105mm f/1.4 DG HSM is spectacular, the Sigma 50mm f/1.4 HSM Art DG, the Sigma 35mm f/1.4 DG HSM Art is “one of the best out there” according to Joey, and the Sigma 14mm f/1.8 DG is a spectacular lens that not many other manufacturers even offer.

6:45 – Now over to video we’ve got a question from Brian who asks, “If I want to use PL mount lenses on a full-frame DSLR, like a Sony a7SIII, and I use a PL to E mount adapter, is there a way to do that without shooting in APS-C mode on the camera?” Dom suspects this is a lens illumination issue and not a problem with the adapter. Many cine lenses were designed to illuminate a Super 35 image sensor and won’t work with a full-frame sensor. Dom thinks Brian may have put a cine lens on an adapter, and those two items onto a full-frame camera and thought the problems were in the flange distance or going from PL mount to E mount. And instead, the problem is the lens wasn’t designed to cover the size of the image sensor in the a7SIII. Because in layman’s terms, the image circle is too small. Dom recommends the Zeiss CP2, Canon CN-E, and Sigma Cine Primes for anyone looking for full-frame coverage.

10:30 – This topic can get in the weeds and feel overwhelming to some quickly, so just remember, if you’re looking to rent or buy a PL mount lens and use an adapter, a quick search can do wonders.

11:50 – Josh wants to know, “Why hasn’t a PL to E, RF, or EF adapter been produced that includes PL lens metadata to the camera?” And well, there are many factors in play for this question. Supply and demand, the fact that most of those lenses don’t have electronic contacts and would take a good amount of money to build, and of course licensing too. And then in some cases, it’s just not possible at all, such as an EF to E adapter for still photography where EF doesn’t have electronic communication capability to begin with. As far as PL goes, it’s probably just not worth the extra money to have iris, focus distance, and focal length for PL lenses as they are entirely manual. Maybe it will happen in the future, and if so we look forward to it!

15:10 – Next up, William says, “I mostly do video, however, it’s often critical that I take a few photos of the event that I’m covering. Photos are not the main reason I’m usually hired, but it’s usually a required deliverable. This means that I must use a mirrorless or DSLR for events where camcorders would be more ideal. The main reason this is a problem for me is the infuriating 30-minute record limit which brings me to my question: with several Panasonic lines and a version of the Sony a7III finally getting rid of that record limit do you foresee more companies following that path?” This is a surprisingly complicated question to answer as well, but we do have good news!

18:45 – And a follow-up from William, “Is there any video camera that can take decent stills?” A C70 is Dom’s first choice, but Ryan thinks it’s not good at either of those functions and advises just having a second dedicated stills camera. Dom has used a Blackmagic Pocket Cinema Camera on a set that wanted production stills and utilized the stills button for the first time in the wild. And FYI, it doesn’t give the user any feedback a still has successfully been taken. And they all agree on the agreed-upon hated answer— just use your iPhone!

23:20 – Carson wants to know “The best advice you have received from professional photographers who shot and developed film before the digital era?” Joey still shoots film, and shares that the best advice he’s been given is simple, but boils down to shooting a lot.

25:50 – Another William asks, “Are you going to branch out into more lighting any time soon? I don’t expect to rent an LA style 5-ton G&E truck, but in many places, the closest rental house that offers service in that area is too far away to be viable.” Dom has 1 word for this. LED. They are the answer since we’re a shipping-based company. The good news is LED is allowing very high-powered lights to be packed into a pretty small and lightweight-sized light. Aperture is doing a great job with it, particularly the 300d.

31:00 – The last question for today is “How did Lensrentals start? Was the goal to become as big as you have or have you exceeded your original expectations?” Well, we’ve done a whole episode on this that you can find here. And if not, Joey, aka, employee 32 or so gives us the Readers Digest run down.

Tweet
Posted in Podcast Episode
How Lens Adapters Work & Why You Should Try Them
The Lensrentals Podcast Episode #52 – Photo Gear Rodeo: 100S, R3, and Z9, oh my!