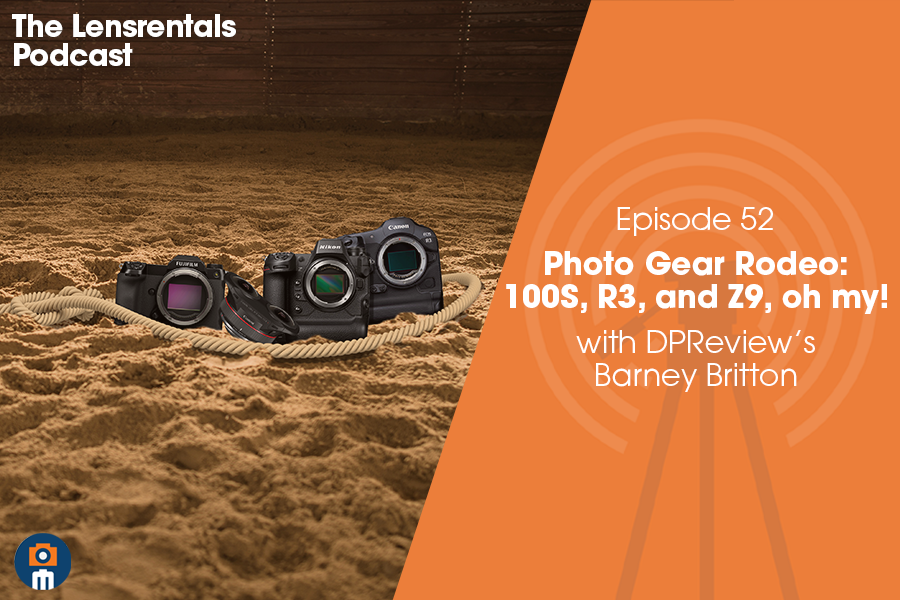 Gather ‘round, y’all, it’s a photo gear roundup! This week Ryan is talking with Quality Control Manager Joey Miller and Blog Editor Zach Sutton about some of our most anticipated new and upcoming products. And, to add a little more professional expertise, we’re bringing on our first-ever return guest: Barney Britton, Senior Editor of DP Review.

As Canon continues its aggressive RF rollout, we’re beginning to see some truly surprising lens announcements, things like the 5.2mm dual fisheye. Given the 8K video capabilities of the R5, this lens, along with some stitching software, could make for a relatively straightforward 180-degree VR setup. Ryan, having recently watched a lot of VR content for podcast research, is of the opinion that a 180-degree field of view is actually a better format for VR viewing than a 360-degree field of view. What remains to be seen is how good and/or necessary Canon’s stitching software is.

From there on, the discussion mainly focuses on new camera bodies. Fuji has released the GFX 50S II, a favorite of both Joey and Zach’s due to its rare combination of medium format and portability. Then we’re covering some exciting new body announcements from Canon and Nikon, namely the R3 and the Z9. Lensrentals hasn’t yet received either of these cameras, but, luckily, Barney has shot with some early copies. How did they perform? Can Nikon regain some of the ground it’s lost to Canon, Sony, and Fuji? Saddle up and listen to the full episode to find out.

0:30 – What we used to call a gear roundup has become a rodeo, and we’re just going with that. Even though half the crew has never witnessed a rodeo…

2:00 – First up, the Canon RF 5.2mm f/2.8L Dual Fisheye lens. It’s available to preorder on our site now. With a new firmware release the Canon R5 will shoot 8k up to 30p, so with 180* view in stereoscopic with this nifty lens that will be viewed on a VR headset. Having consumed a good bit of VR footage lately Ryan likes the ease of use that shooting with a 180* format offers vs 360*, and we are all interested to see how this lens is used.

5:30 – We’re interested to see what the software for this lens is like. Canon’s EOS VR System is comprised of this lens plus an EOS R5 camera with updated firmware and subscription-based software, either Canon’s EOS VR Utility or EOS VR plug-in for Adobe Premiere Pro, both of which are currently in development. Availability and details to follow on or about early 2022.

9:00 – Zach is excited that Canon seems to be leaning into the weird creative lenses when there are still big holes in their lineup as far as traditional offerings are concerned. And Joey is curious who was pushing for the dual fisheye so hard to get it to happen so early, but we’re all here for it.10:10- Next up, the Fuji GFX 50S II. Zach just died fully transition to Fuji from Canon and now primarily shoots with the GFX 100S and he sings the praises of the GFX 50S, saying “It’s half the resolution but otherwise it’s pretty much spec for spec identical, an incredibly great camera for any studio photographer who wants to shoot larger than 35mm and doesn’t need the crazy autofocus or shooting speeds. This camera is amazing.”

12:10 – Barney points out that the GFX 100S gets about as close to the autofocus specifications as a medium format can in relation to what is expected from DSLR’s. There are two caveats to be aware of Barney points out, both related to the first generation 50mp sensor, “It’s not bad, but it’s really no better than the sensor in the Nikon Z7 MK II at equivalent exposure settings. The other is you don’t get the face detection autofocus. It’s a good sensor for the time, but it can’t compete with the best in class full-frame sensor from Sony.”

15:45 – Still chatting about the GFX 100S, Joey recounts taking one to Iceland a few years ago and how now he’d definitely swap it out for a GFX 50S. Barney shares a cool insight that the GFX 100 has a sub-chassis with all the components attached to, and the body frame on top of that, so it’s “extraordinarily rugged” as compared to the GFX 100S. Cool!

17:50 – Time for the most anticipated piece of gear on this list, the Canon EOS R3! This is the equivalent to a 1DX with an RF mount. Features that set it apart from the R5 include being much faster, larger and significantly better battery life, Dual-Pixel CMOS Autofocus II make it much closer to the experience of using a Sony a1 or a9 MK II

20:30 – Joey explains that EVF lag has always been a concern, but as the lag gets shorter and shorter you learn to anticipate it, and shoot in bursts to compensate and not miss the moment.

22:30 – The Canon R3 also brings back, and actually executes eye control autofocus, which is really cool. If you’re not sure exactly what that means, it’s where the camera senses where you’re eye is pointing in the viewfinder and focuses there. We’re really excited about this, “it’s the coolest thing ever” according to Joey.

26:20 – Zach is fascinated by the release cycle and how it’s evolved over the last few years. The R3 and Z9 are two flagship sports cameras that seem to be released in conjunction with the Olympics or other large sporting events, and with those types of events delayed we’re not seeing releases from manufacturers for sports and wildlife enthusiasts we’ve gotten used to seeing.

28:10 – Where you see the benefits of the ground-up mirrorless lens design really are with standard wide zooms and ultra wides, and no one is rushing to make super long telephotos because of the performance with existing lenses that are using adapters are more than sufficient. Especially as compared to several years ago.

29:00 – Why doesn’t the R3 offer dual CFXS slots? Possibly because of heat! Remember the adventures in the heat with the R5? Yea, we postulate this is why.

31:00 – What would each person want to see added to the RF lens lineup? Joey wants to see a native 200mm, or a faster wide prime. Barney wants to see some lower cost, size, and weight offerings for enthusiasts to lower the cost of entry. Zach wants the 200mm, and specifically a 200mm f/1.8, and a professional grade 35mm, like a 1.4 or 1.2L.

36:30 – The Sony a7 IV, it’s another incremental upgrade that will sell well, but are any of our panelists excited about it? Joey says inflammatory things, Barney vouches for incremental change and praises the changes made to the UI.

39:00 – Now, Barney gives us a rundown of the Nikon Z9. Nikon is hoping it’ll have a similar energizing effect as the D3 did back in the mid-aughts. Barney says that it’s at least on the same level as it’s Canon and Sony peers, and a massive leap forward. Priced at $5500 it’s not that much more expensive than a D850, and barney thinks Nikon is hoping it will sway some consumers who’ve been waiting to make the switch to mirrorless.

46:00 – if anyone knows how to make pretty good pro-enthusiasts and professional cameras, it’s Nikon. People have been writing them off for years, and they’ve had to make many changes, and are smaller overall in almost every way, but they are still around, and they know how to make good cameras. We’re all excited to see how game-changing the Z9 is going to be.

48:00 – What makes Nikon different from Sony or Canon as a brand? Barney thinks even Nikon would struggle to answer it, seeing how they’ve had a difficult time carving out a brand identity. They are a slow and steady, reliable, no-compromise company with an unimpeachable reputation for extremely well-built gear.

51:00 – Both the Canon R3 and the Nikon Z9 are using a stacked CMOS sensor, which allows them to be as fast and multi-role capable as they are. Barney explains this means it has memory on the sensor itself, so it allows for things like extremely rapid autofocus calculations, and very fast frame rate shooting and video. So it’s all about the speed of data transfer, very low rolling shutter video, and almost mechanical shutter ratings for flash sync. All the geeky goodness that makes for a really cool experience in hand.