The Sony ZV-E10 Mirrorless Camera is a compact, video-focused mirrorless camera with a feature set optimized for content creators, vloggers, and influencers. It’s an update to the Sony ZV-1. Key features include:

24.2MP APS-C CMOS Sensor. The ZV-E10 revolves around a 24.2MP APS-C Exmor CMOS image sensor and a BIONZ X image processor working in tandem to create images with reduced noise at high sensitivities. The ISO range covers a base level from 100-32,000, but is expandable to ISO 51,200 for shooting in low-light scenarios. Snap at a rate up to 11 fps burst before you fill up the 77 JPEG/33 RAW compressed buffer.

Side Flip-Out LCD and Audio Options. A rear 3.0-inch, 921.6k-dot touchscreen LCD features a side flip-out design that’s great for filming yourself and taking selfies with ease. The camera’s top plate incorporates a directional three-capsule mic built for forward-directional audio recording, and there’s a 3.5mm mic port and a Multi-Interface Shoe to accommodate external mics and accessories.

UHD 4K Capture. The ZV-E10 borrows its video functionality from the higher-end a6100. This camera records 4K internally to an SD card at 100 Mbps using the XAVC-S codec. To create the 4K image, the sensor provides a full pixel readout, without any pixel binning, resulting in a near-6K image that’s oversampled to create the final image. And if you don’t want to record internally, you can always output an uncompressed HDMI signal at 4K with 4:2:2 sampling. When not shooting 4K, you can record Full HD video anywhere between 1-120 frames per second to go slow motion or fast paced.

Fast Hybrid Autofocus. This autofocus system’s 425 hybrid phase- and contrast-detection autofocus points densely cover 84% of the sensor area for ridiculously precise focusing at a speed of 0.02 seconds. The ZV-E10 boasts Real-Time Eye AF technology, which uses AI-based object recognition to detect and process eye data in real time so that focus on the subject’s eye will be as sharp as possible. You also get High-Density Tracking AF, which tracks moving subjects with ease in a variety of lighting conditions; Lock-On AF, which holds focus on movie subjects via a configurable frame over the subject; and Expand Flexible Spot, which uses neighboring focus points to maintain focus on even if the selected point loses focus.

Advanced Controls. This camera offers control options optimized for content creators. There’s a giant Record button for ease of use when vlogging, and a dedicated function button that can be programmed to offer quick adjustments of several different functions, allowing users to forego menu diving. You also get dedicated Movie Record, Background Defocus, Product Showcase, and S&Q buttons that give you immediate access to popular vlogging features. The large, comfortable right-hand grip was designed with one-handed use in mind, a built-in zoom lever surrounds the shutter button and works with select Power Zoom lenses.

Built-In Bluetooth and Wi-Fi. Integrated Bluetooth and Wi-Fi let you instantly transfer images to your mobile device so that you can easily share them on social media, in email, and to the cloud. Once you’ve connected the camera to Bluetooth or Wi-Fi, it can display a live-view image on its screen. You can use Sony’s Imaging Edge mobile app to connect to a smartphone using a QR code. The Imaging Edge app lets you create time-lapse movies, edit your footage, and more.

User Flexibility. The ZV-E10 records images/video to SDHC/XC memory cards (not included) and is powered by the popular NP-FW50 rechargeable lithium battery, which is rated for roughly 440 shots per charge. Please note that 4K video capture in S-Log2 and S-Log3 requires a UHS-1 Class 3 or faster memory card. 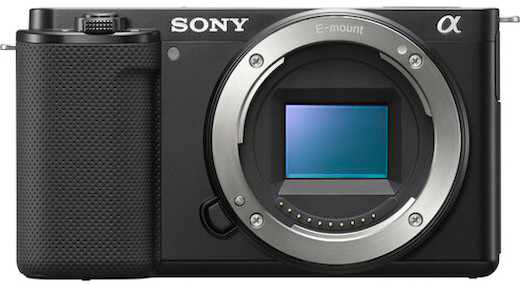 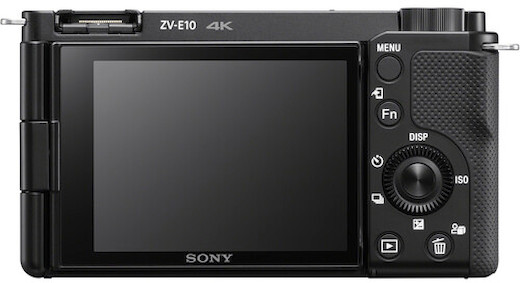 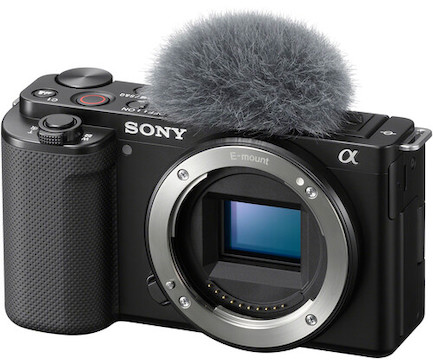 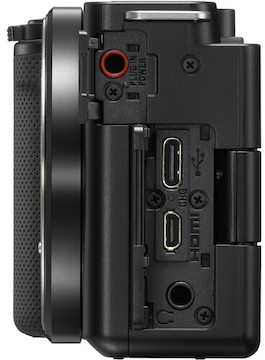 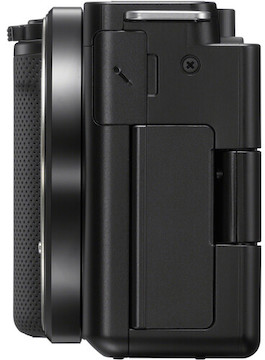 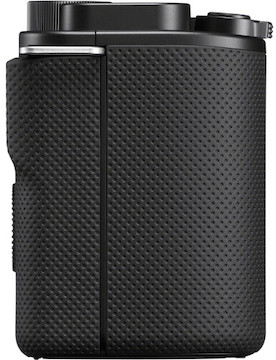 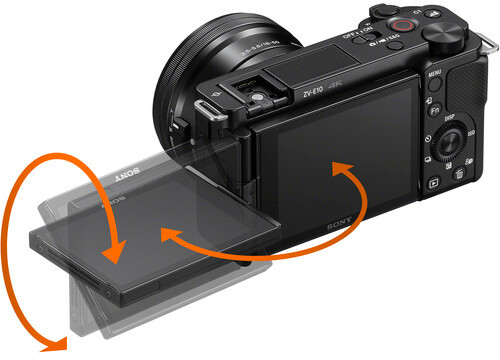 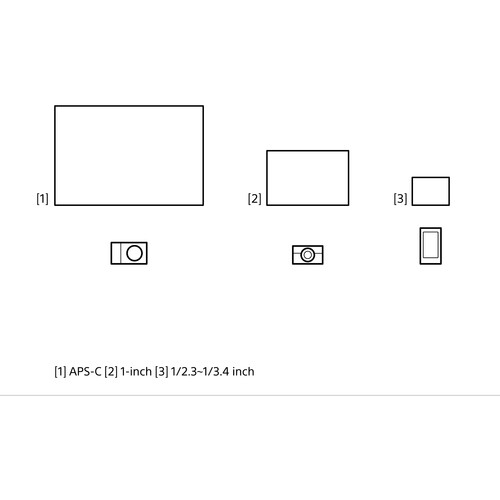