The Olympus 75mm f/1.8 is Expensive Because It’s Worth It.

The first Olympus 75mm f/1.8 m4/3 lens arrived today, courtesy of Tyler’s connections with the King of Siam or wherever it is he gets these things. I had to test it, of course, because that’s what I do. I hadn’t planned on writing about it; the lens has already been reviewed thoroughly at SLRgear.com, sample images posted at DPReview, and a very nice user review done by Robin Wong. My Imatest numbers aren’t going to expand the world’s knowledge of the lens much. It obviously rocks.

I was already having a lens crush about the equivalent of teenage-girl-on-Justin-Bieber. I love to shoot at 135mm for long portraits and stealth street photography on SLRs (Canon 135 L, Nikon 135 DC, Sony 135 f/1.8) so this lens was very likely going to fill a niche for me. I was going to Imatest it and then take it home for some extensive long-term testing. You’ve seen all my long-term test write ups, right? No? Well, yeah, I generally don’t get around to doing them. Just keep the lenses in case I want to do a long-term test write up. Or something like that.

But guess what? When I opened up the new lens, there, right inside the center of the rear element, was a big chunk of Loctite (for those who don’t know, it’s a type of glue used to seal screws in lenses, dries to a plastic like finish, and occasionally a piece breaks loose inside a lens). 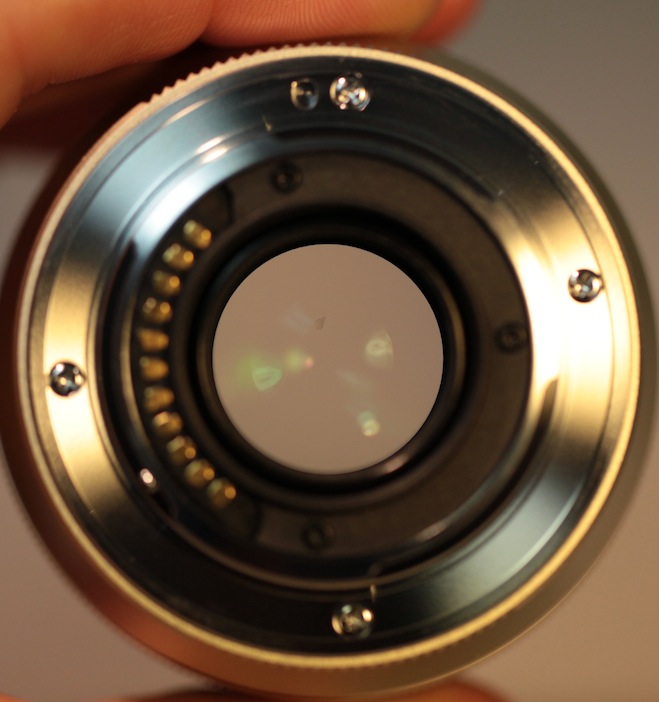 Now, before you decide to a) go major fanboy and declare to all who aren’t listening that this never happens to your brand, or b) sing the “quality control should never allow this to happen” song in three part harmony with the My Nation Assembles Better Than That Choir singing in the background, come back to reality.

This happens not infrequently, and in every lens brand. Not a week goes by that we don’t see it. A test shot wouldn’t have picked it up, it doesn’t show on images. Looking through the lens in regular room light didn’t show it. Looking through the lens against a smooth background using a couple of  halogen front lights shows it. It may sound like silly overkill, but I can assure from long experience that had we sent it out, the first renter would have done just such a check and complained about my quality control. So yeah, we overkill the QA thing a bit.

So guess what? One thing about Tyler’s somewhat-unique sources of supply: they don’t have a 14 day exchange policy. So Aaron and I had to go get that out. Which means a little lens disassembly and a chance to peak inside this bad boy.

Compared to a lot of m4/3 lenses, there’s an immediately apparent quality difference: the lens is large with metal barrel and lens mount, both electronic contacts and rear baffle are screwed in, not just held in by friction. 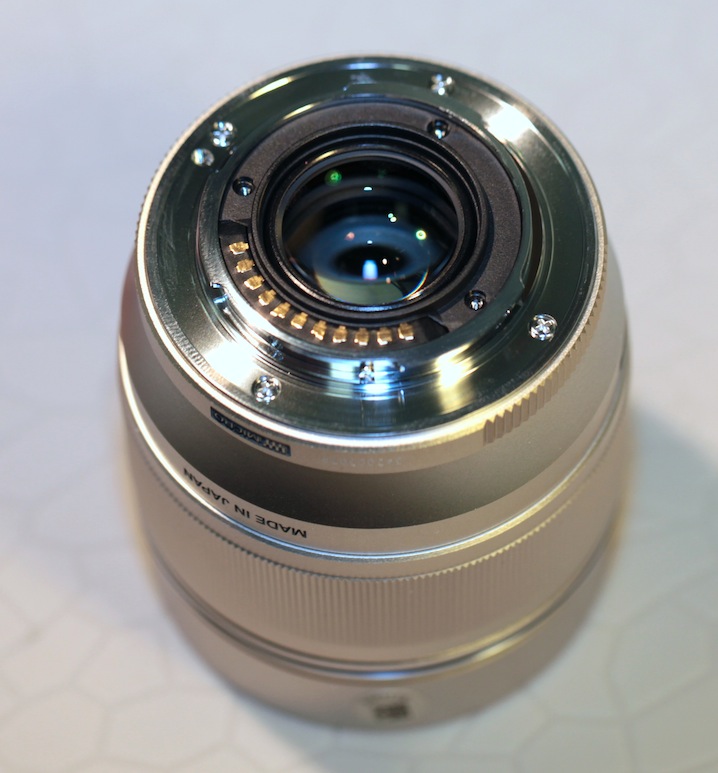 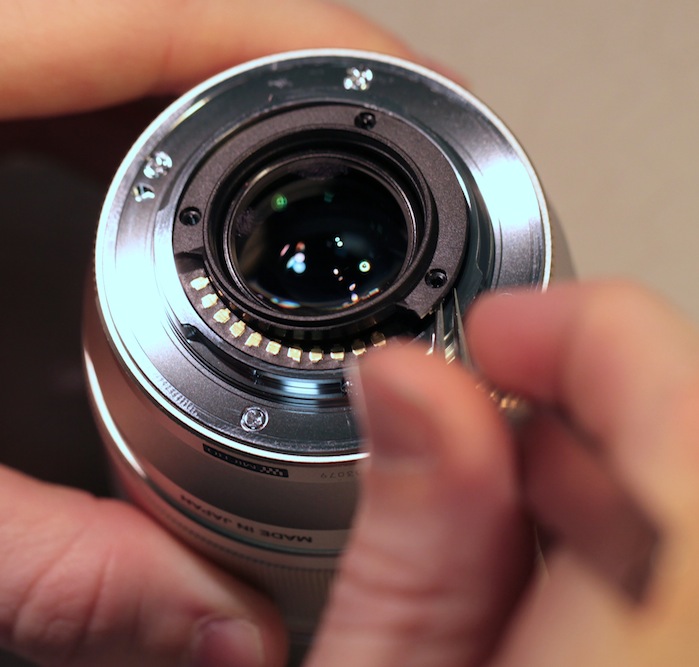 Under the rear mount is what is shim. Thickness is likely adjusted to assure infinity focus since the entire lens is forward of this. 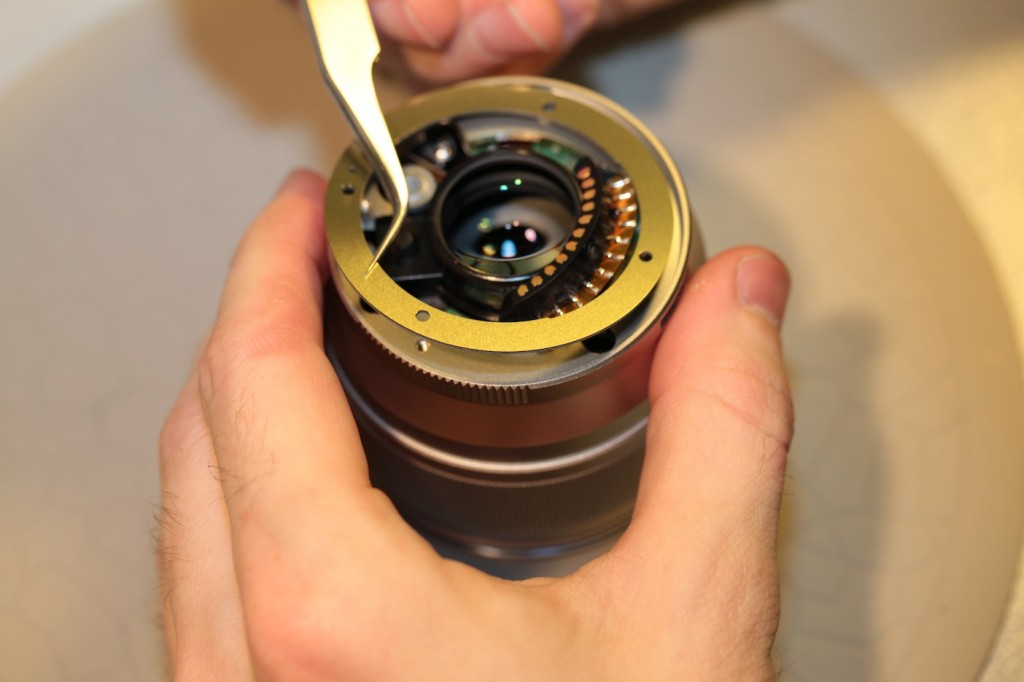 Underneath that we can see another bit of heavy-duty assembly. The barrel is attached with 4 large, long screws. These are of the size and number comparable  to what we see in “L” quality or “Pro” quality SLR lenses, and rarely in m4/3 lenses. Mirrorless cameras often have 3 small screws here. As an aside, that is Aaron’s thumbprint on the edge of the lens now, so if any of you are in law enforcement you may want to forward it to check for outstanding warrants. 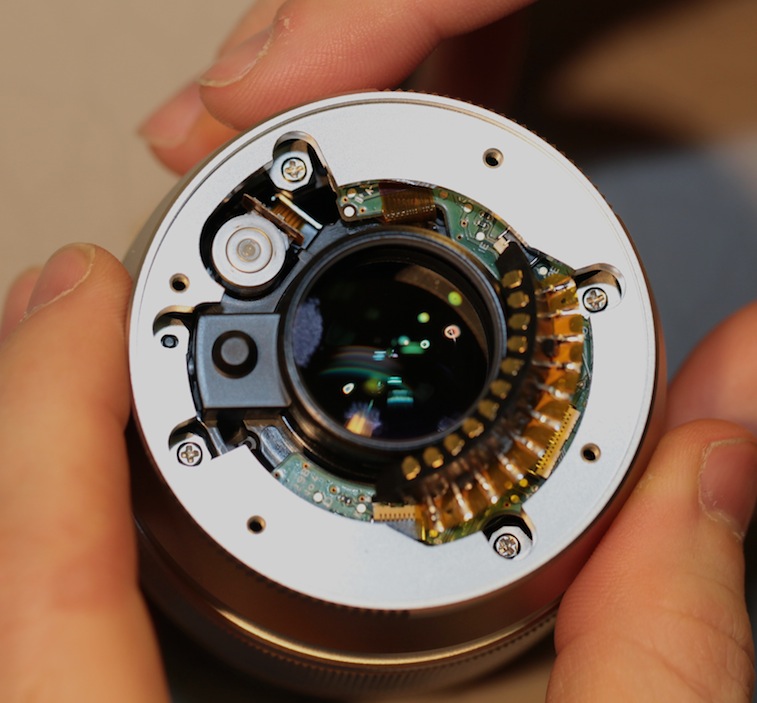 Taking out the 4 screws lets us remove the rear barrel 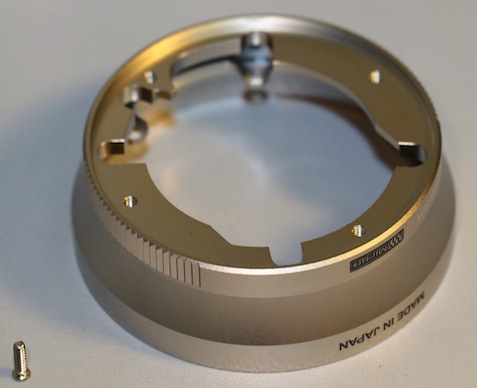 Opening up the PCB and attached flexes controlling the electronics and exposing the AF motor at the top. Notice again, the PCB is attached with two large screws where most mirrorless lenses have one small one or even just a couple of plastic posts with the board held in by friction. 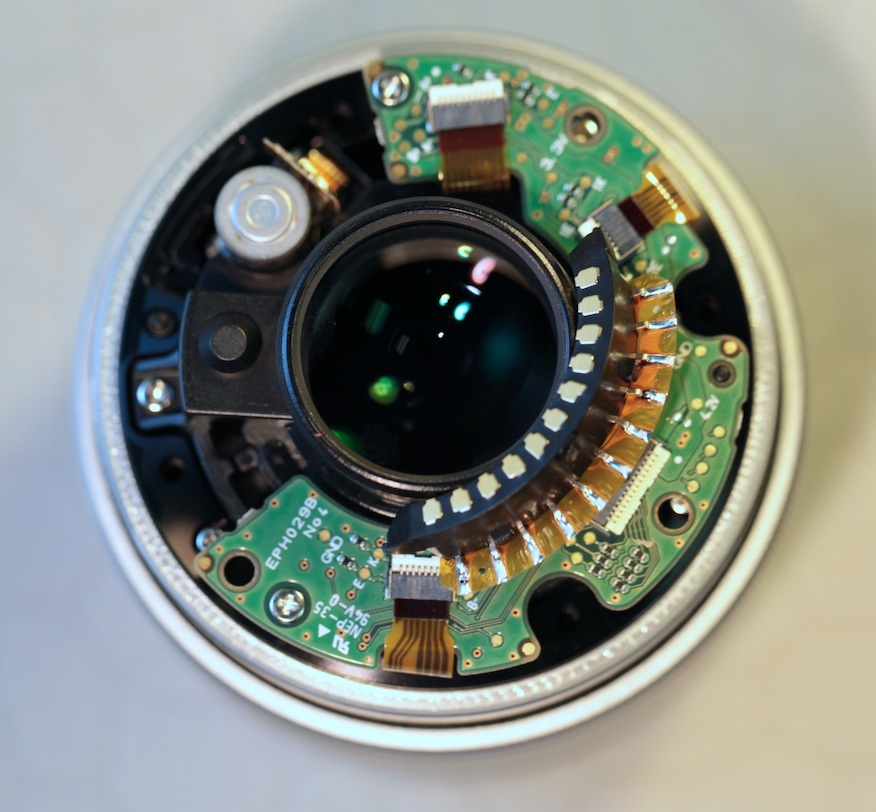 For fun, if we angle the flash just a bit on this shot we get a nice look at the color of the lens coatings used on this lens, which also brings Aaron’s fingerprints into clear relief. 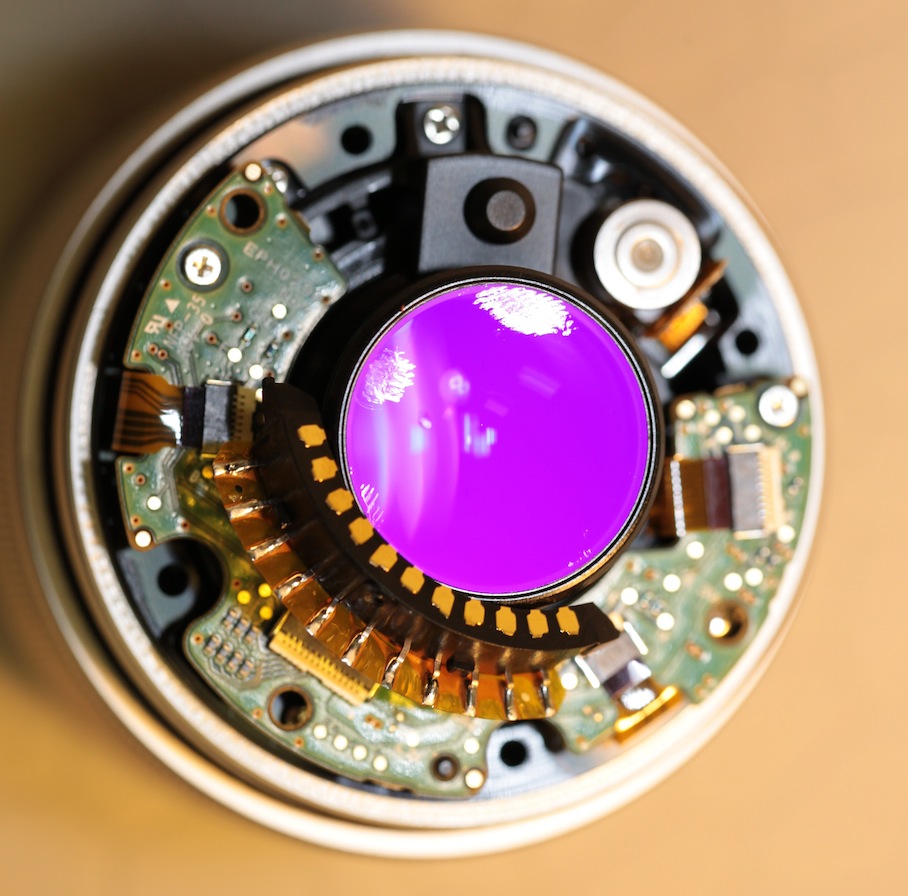 Taking off the PCB and disconnecting the flexes gets us down to the core of the lens. 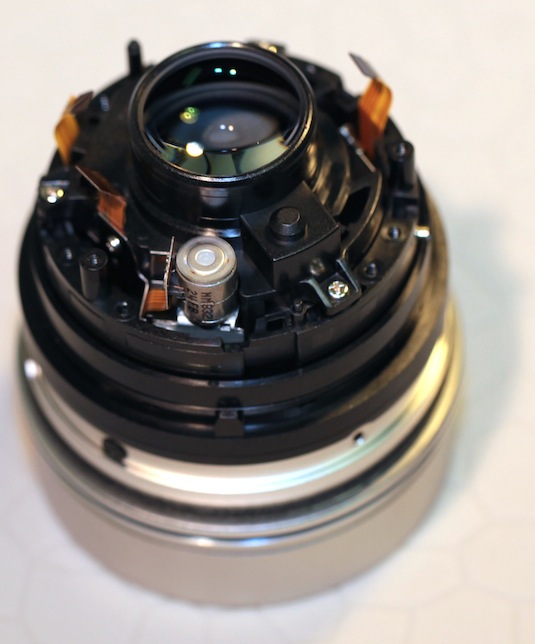 One thing that’s apparent, and nice, is that instead of screws and keys attaching the outer focusing ring to the actual focusing mechanism of the lens, Olympus has molded the part into the focusing barrel (red arrow). This would eliminate one of the possible causes of a jammed focusing ring we see fairly often. 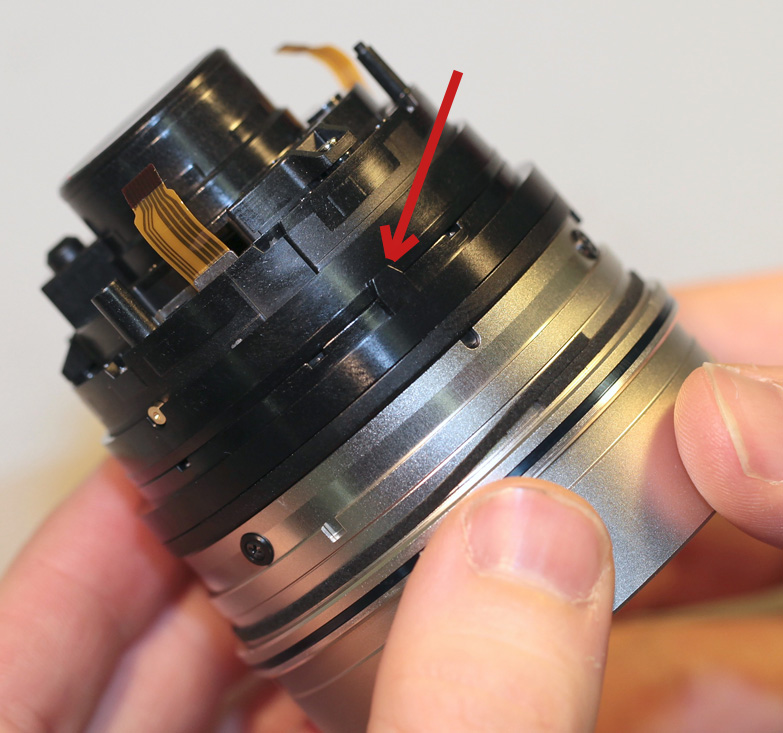 Removing 3 more screws lets us remove the rear groups in one piece (you can see the bit of hardened Loctite is in there). 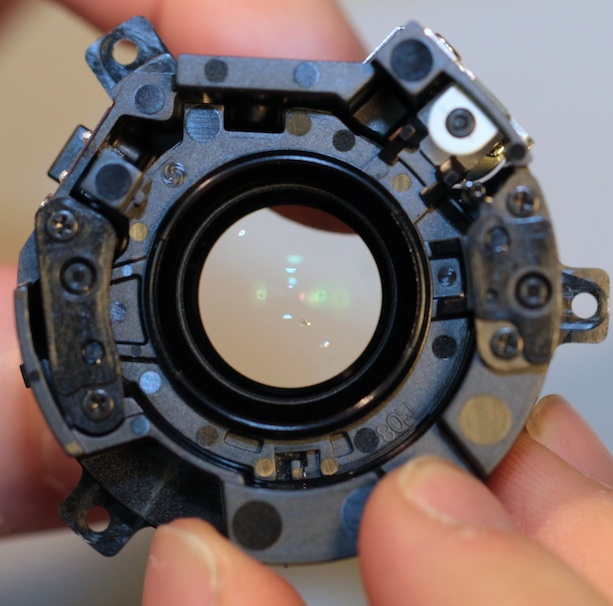 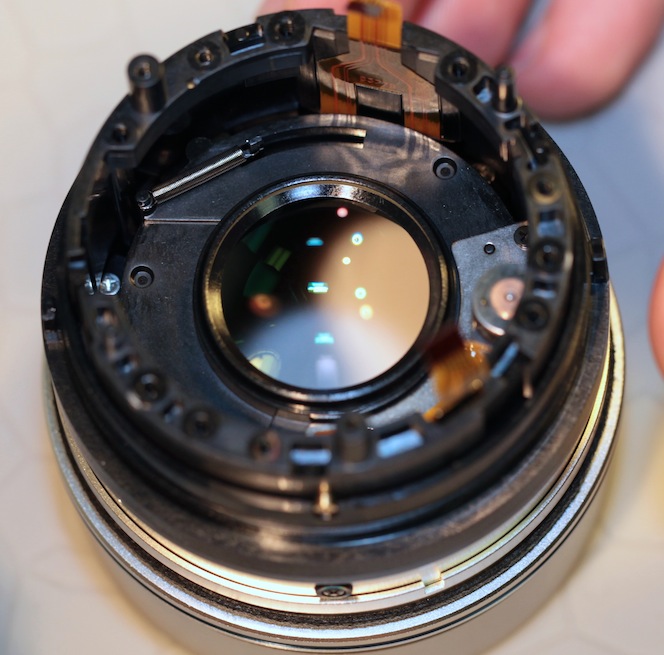 Slipping the diaphragm control lever with a forceps demonstrates the very nice 9 bladed aperture ring which remains fairly circular even stopped down. 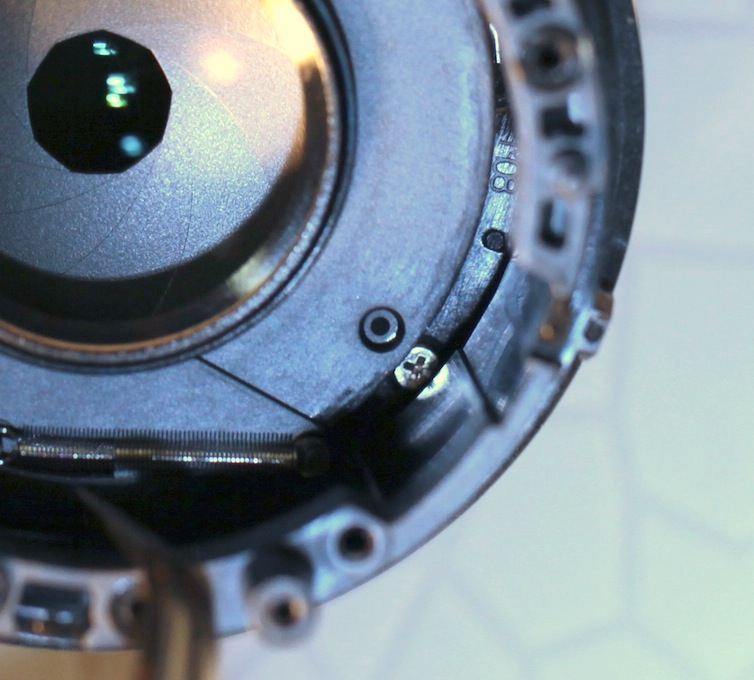 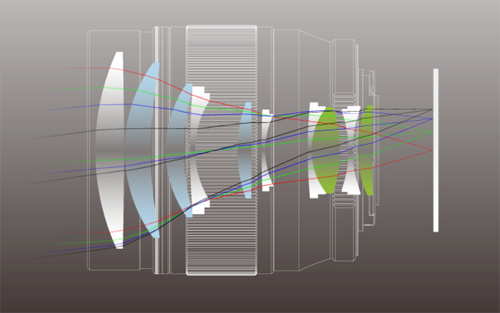 As we had been living right, apparently, the bit of loctite was easy to blow out from the side of the removed assembly and things put back together in a few minutes.

Not much really, except I like to look inside equipment and see how it’s built. (Some of you like to see, too.) This lens is built in much the same way that top-quality SLR lenses are made, which is not always the case for small, mirrorless camera lenses, as we’ve seen before.

Some people are put off by the price, at least from the discussions I’ve seen online. My perspective is that sometimes things are expensive because they’re worth it. This seems to be one of those times. The build quality is different than the majority of mirrorless lenses. The ones that are built like this are about this price range.

As far as image quality, I won’t repeat what has already been done more thoroughly elsewhere. But I will say the Imatest results are spectacular. Even wide open at f/1.8 the lens is resolving 880 / 765 Line Pairs / Image Height which is truly outstanding, especially in the corners. Stopped down to f/2.8 it resolves 1020 / 925. For me personally, it’s a focal length I’ll use a lot. Probably more importantly, it gives m4/3 users a high-quality short telephoto lens, something that has not been available without using adapters and giving up either small size or autofocus (or both).

Obviously, some of you will find it amusing that I’m writing about what a high-quality lens this is, considering we had to clean it out on arrival. Chances are if you’ve owned 10 or 20 lenses you’ve never had one arrive like this. Trust me, if you had 10,000 lenses you’d consider this an everyday event that affects every brand. It’s not common, but it happens.

It amuses me that a couple of weeks ago I wrote about the new 24mm and 28mm Canon IS primes that I felt were overpriced at around $900, yet I believe this $900 lens is well worth the price (if you can get it for list price). This lens is built better and is arguably sharper. More to the point, I can choose from among a lot of good SLR lenses in the 24 to 28mm range. For the micro 4/3 mount in the over 45mm range I can choose this one.