In the days leading to Photokina, it seems that every manufacturer on the planet has announced at least one new camera. Keeping up with the myriad announcements has been trying for us, and we get paid to do it! So for all of you that don’t have the luxury of being paid to follow camera announcements, we’ve put together a little information on each of cameras. Because we know some of you value his opinion (or because he just can’t help but give his opinions), Roger has chimed in with his initial thoughts on each of the cameras. 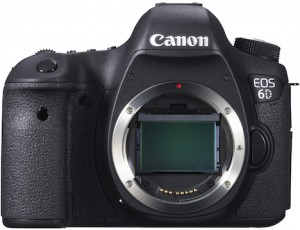 Well, if you were thinking that you want to pick up a Canon 5D Mk II at a bargain price, you’re in luck. Either because you’d rather have a Canon 6D, or because the 6D will drive 5D Mk II prices down even more. In some ways it’s better than a 5D Mk II – smaller, probably better metering, maybe better high ISO performance. In some ways, it is not (97% viewfinder bothers some people, ergonomics look a bit cramped, but I haven’t held it yet.) Interesting that it shoots a bit faster, but uses SD cards. One very positive thing — it keeps the quiet shutter mode they brought out with the Canon 5D Mk III.

If you’ve been waiting for built-in GPS and wifi, then this is the camera for you. Probably. We’ll see how it works. I’ve used Canon wifi before. But surely they’ve worked the bugs out of it by now. I’d write more, but, ::yawn::, it’s really rather boring.

So 5D Mk II or 6D? I’ll wait until I see the autofocus, thank you. If the 6D is better, there you have it. If not, well, I’m underwhelmed. One thing, though, for all of you “full frame for the masses, death to APS-C sensor” folks out there. Price you some full-frame lenses, first. The cost of a full-frame upgrade is NOT the camera. It’s definitely not the camera. 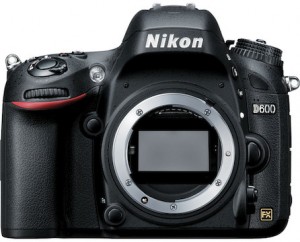 In the World Series of Camera Poker, Nikon just pulled the visor down, put on sunglasses and said “I’ll see your 6D and raise you two zeros.” It also raised it 4 megapixels, an f/8 sensitive center sensor, 39 (compared to 11) autofocus points, and some weather resistance. If you have that wireless hankering, you’ll need to add the WU-1b widget and stick it in the USB port. I mention this largely because Nikon, as is their habit lately, wrote copy that says “built-in HDR, wireless photo sharing” which many people read to mean built-in wifi. Not so much.

Preliminary reports show good autofocus, at least using single-shot mode. I’m a bit concerned that Nikon says high ISO performance is nearly as good as the Nikon D800. That can be a very broad brush they’re painting with, there, but we’ll see soon enough. Otherwise, the camera has some nice features for an entry-level full-frame: Headphone jack, uncompressed HDMI video output, quiet shooting mode, etc. I think, really, the camera fits its niche below the D800 more logically than the Canon 6D fits below the Canon 5D Mk III. 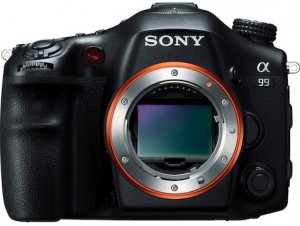 It’s been a while since we’ve had an upgrade to Sony’s flagship. It’s priced like the 5D Mk III and D800, so we need to compare it to those cameras rather than the 6D / D600. With a Sony 24 megapixel sensor, it’s going to have great image quality. Sony can make them some sensors, that’s for certain. Full HD video with HDMI out is nice, and 6 frames per second is very reasonable. There are some very nice touches, like the tiltable high-quality LCD and the multiple use hot shoe that will take Handycam accessories for you video shooters.

With this camera, more than any of the others, though, I have little to say until we see it in the real world. We haven’t seen a “Dual Phase Detection” autofocus system before. Is it awesome? Adequate? How will an electronic viewfinder, even a great one, be on a full-frame camera? Will a full-frame semi-transparent mirror hold up over time? You don’t get to “clean the sensor” at home with this technology and a bad mirror is, well, bad.

Truth is I’m more excited about this camera than anything else announced this week. It could be very good. What is certain is that Sony is not afraid to try new things. They might not all work, but that’s how progress is made. 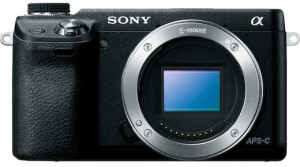 Well. I’m not quite speechless, but I’m not sure what to say. It’s logical, I guess. Half Sony NEX-7 (same size, same flash, same display but no touchscreen), half NEX-5n (similar sensor, wifi, apps, hybrid AF, and button controls). It’s nice and all.

But all I’m really interested in is this: IS THE LENS DECENT? I’M JUST ASKING FOR DECENT, SONY. There. I feel better now. It’s a very cool looking lens, all retracting up inside itself so it’s really small and convenient. I can live with f/3.5-5.6 since that keeps the size reasonable. If it’s a decent lens. Because if it’s not, we’re still hanging around with our great NEX cameras waiting for a single decent zoom lens. 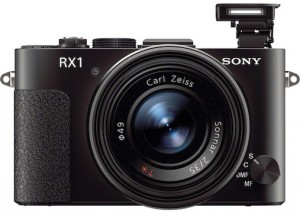 A 35mm f/2 Carl Zeiss Sonnar T* fixed lens with 3 aspheric elements and a silent leaf shutter. That awesome Sony focus peaking filter if you want to manually focus. 24 megapixel full-frame Sony sensor. We’re talking the same sensor that’s in the Sony A99.  Which is exactly the sensor it should have because it costs just about the same amount as the A99, at $2,800. Plus another 6 bills if you want a viewfinder, and $180 for a lens hood. We’re talking near-Leica money here.

This will either be a Leica killing amazing machine that I just must have, or it won’t. 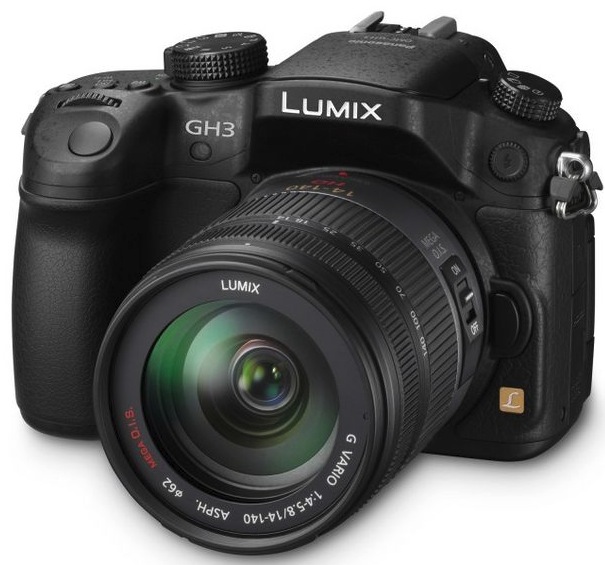 The Panasonic GH2 was the dominant mirrorless camera for video work until . . . well, now I guess. The GH3 should take that title through a series of meaningful improvements. It has a more robust, weather sealed body. It’s also significantly larger, which videographers will consider a positive. They claim sensor improvements, but that will need some further verification. It records video at bit rates as high as 72Mbps, which only the Canon 5D Mk III can rival among SLRs (the GH2 maxed at 24 Mbs). It can also record in MP4, MOV, AVCHD or AVCHD Progressive formats and even include SMPTE time-codes.

The photography jury is out on this one. High-end videographers will love it. Photographers probably not so much. But it really is going to come down to how the sensor performs and how realistic those ISO 12,800 claims are. 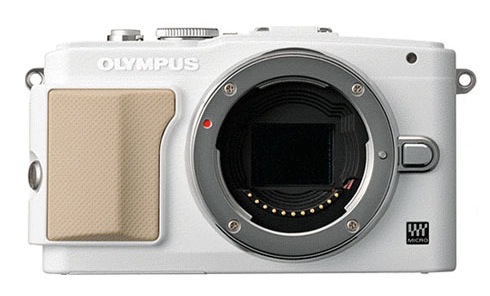 And just to be obnoxiously cool, Olympus has introduced the BCL-15 ‘body-cap lens’. You use it like a body cap on the camera, but it has a 3-element, 15mm f/8 lens built in. U. S. price not announced, but expected to be around $70. Useful? I have no clue. Cool? Damn right! I think next year I’ll drop out of Lensrentals to be an Olympus Fanboy full time. 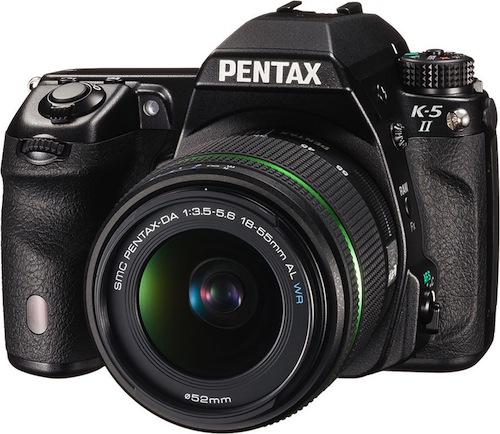 Well, the Pentax K-5 was really, really good. The II is a minor upgrade with an autofocus sensor tuned to be better in low light, and a more glare and scratch resistant LCD on the back. Not anything that would force a current K-5 user to upgrade, but still a very good camera. 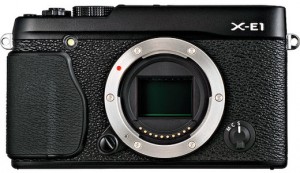 Smaller than the Fuji X-Pro1, and with a pure EVF, rather than the hybrid optical-electronic viewfinder of the  X-Pro1. Luckily, it still retains the X in the name, the excellent sensor, and even has a better LCD. The X-Pro had two huge weaknesses: Its high price and horrid autofocus. The X-E1 addresses both issues. The firmware update makes a huge difference in AF capabilities of the X-Pro and this camera should be at least as good. Assuming a street price similar to the NEX-6, Fuji may actually be competitive in the mirrorless market, with their excellent lenses and sensor. 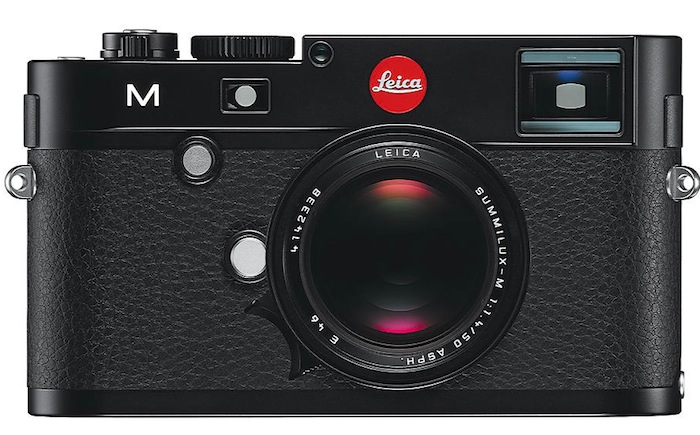 I absolutely hate when Leica releases a new . . . well, anything. Not that I don’t love Leica stuff. I do. But I hate the 4+ marketing drivel that has become Leica’s informational release. Never has a single company said so little in so many words.

I think they have a computer program that finds random marketing catchphrases and simply inserts them in format:

The Leica M is actually the follow-up to the Leica M9, and remains at the same price (a pleasant surprise). It adds several unexpected features: HD video, the ability to use R mount Leica lenses, and a 24 megapixel CMOS sensor, and a fairly up-to-date LCD with good resolution. Most importantly, for some of us rangefinder-challenged photographers, it adds Live View focusing. Now I actually can shoot Leica lenses on a Leica camera and focus them. (This is no slam on Leica, I have a vision issue that makes it difficult for me to focus a rangefinder.)

Leica has done something I’ve said for years camera manufacturers could do if they cared to: The grip for the camera will be available in several sizes so everyone can find one comfortable for their hands. There’s one question remaing, though. The M9’s CCD sensor out resolved it’s nominal 18-megapixels. We’ll have to see if the new 24-megapixel sensor is a step up, or about the same. I can’t make up my mind as to whether I’m ambivalent about this one, or just don’t care much. 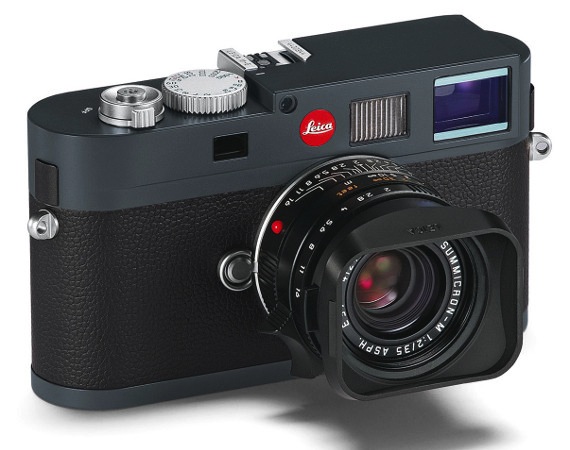 Like the M, the Leica press release left me wondering if this was a camera, a fine wine, or a piece of art being actioned at Sotheby’s. But after a bit of investigation we were able to find some facts: M9 light. That says it all. Same awesome CCD sensor, same crappy LCD on the back. Pure rangefinder. Lower price. Not low, but lower. I have this sneaking suspicion this is the Leica release that will sell.

These two are huge fashion risks. I suspect Sony is just fine if the RX-1 sells or doesn’t sell: They’ve made a statement and another first, with a full-frame, fixed-lens camera. Leica, I’m not so sure about. I’m probably missing the attraction of mounting a 2 pound R lens to a rangefinder to shoot video. And it will be very interesting to see how the sensor does. They certainly hedged their bets with the M-E which may be a good thing if that new sensor is, well, like everyone else’s sensor.

Most Logical Release: The Nikon D600

It fills a perfect niche in their lineup. If I was betting on which of these cameras will be the most popular, that would be the one.

Made Me Buy Something: The stupid Olympus body-cap lens.

Actually take pictures with it? Probably not often. Going to buy it? Absodamnlutely.

Real New Technology: The Sony A99.

Full-frame translucent mirror. Full-frame SLR with EVF. New autofocus technology. I don’t know how the camera will do. But I do know Sony is doing new, aggressive things. That almost always pays off in the long run.