We got a pre-release set of Sony FE 90mm f/2.8 G OSS Macro lenses in for preliminary testing last week, and I was kind of excited about this lens for a couple of reasons. First it simply gives me a nice short telephoto prime option that has been lacking in the lineup (although the Zeiss 85mm Batis lens will be coming along fairly soon). Second, it gives me a true macro lens at the focal length I prefer.

I hoped that the combination of a good macro lens with the A7r sensor would turn out to be a winner. We used our Imatest lab to compare Sony 90mm f/2.8 G OSS lenses mounted to Sony A7r cameras, and compared them with Canon 100mm f/2.8 IS Macro lenses shot on Canon 5DIII cameras in our Imatest lab. (For those who are curious, we can’t test Sony E mount lenses on an optical bench because the electromagnetic focus system requires electrical power to operate. Until we do some really geeky, overly complex engineering modifications, the optical bench isn’t an option for Sony E mount lenses.) It would have been nice to also compare with a Nikon D810 and Nikon 105 f/2.8 Micro lens, I know, but our time is limited.

First of all, if you’re used to Sony E mount lenses being smaller than their SLR counterparts, you’ll need to get over that. The 90mm lens is very similar in size to the Canon 100mm f/2.8 IS and other SLR macro lenses in this focal range. 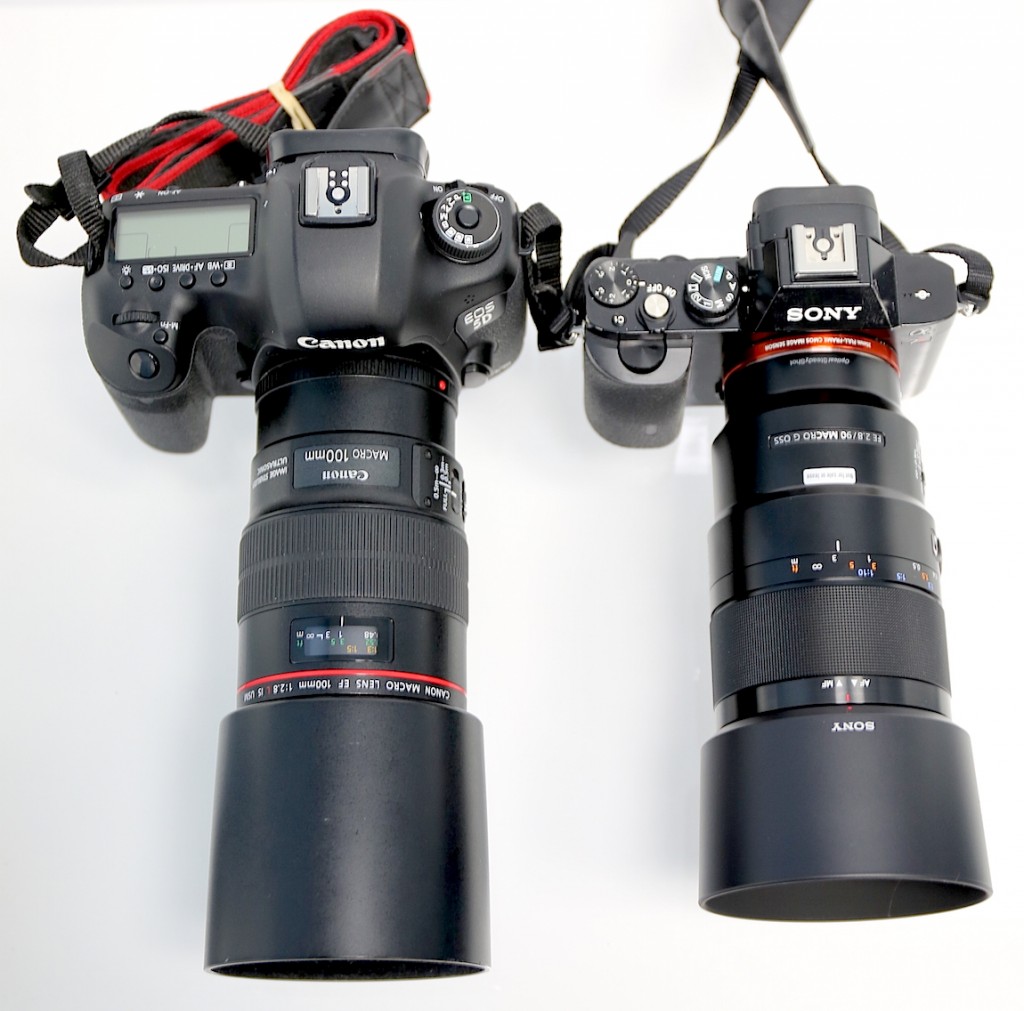 If you’d like the numbers for comparison, I’ve put them in a table.

The Sony is a bit more expensive, but that’s not unusual for a new release. Otherwise they are pretty similar in specifications.

We tested these in our Imatest lab but at two different focusing distances and with two different charts. Remember, the higher resolution of the A7r camera will make the system resolution higher. My thinking when making this comparison was if the Sony lens wasn’t up to the standards of the Canon (which is arguably the best macro lens in this focus range), then the Canon system would be close to the Sony, despite the higher resolution of the Sony camera.

Our first test was using a standard Imatest setup shot at a distance of about 20 feet.

We then repeated the tests, using a high-resolution, back lit chart made by Imatest specifically for testing macro lenses. The focusing distance was now just under 2 feet. This doesn’t give us quite full 1:1 macro working distance, but it’s pretty close.

At both focusing distances the Sony system is clearly out resolving the Canon system. We would expect that, to some degree, given the higher resolution Sony sensor. But the difference was, quite frankly, surprising to me. It would seem to indicate the new Sony 90mm Macro lens performs at least as well as the Canon 100mm f/2.8 IS L, from a resolution standpoint, anyway.

Please don’t take this out of context. These are simply Imatest MTF50 numbers. By that standard the new Sony 90mm f/2.8 G OSS Macro seems to be a superb addition to the E mount lineup, and the lens on an A7r should provide superb resolution. We’ll have to look at more in-depth, hands on reviews to see how it actually performs in the field, what the bokeh looks like, how well the OSS performs and a host of other factors to decide how great (or not) the lens performs in the real world. But these preliminary results look very good.