Finally, the last in our series of MTF and variation tests is here. We’ll be doing these going forward as new lenses are released but for now we’ve got a nice database of common lenses that we can measure others against. We’ve completed almost all of the common prime lenses, along with wide and standard zooms in Canon and Nikon mount. Today we’ll post the Nikon and Canon 70-200mm f/2.8 telephoto zooms and that will end this series of posts for now. Yes, I understand you want to see the f/4 telezooms and some other stuff. But that will have to wait and trickle out over time.

Most zooms have a ‘better’ end, but the Canon 70-200mm f/2.8 IS II is pretty even throughout the zoom range. There are some minor, hair-splitting differences, with it having less astigmatism in the middle part of the zoom range, but it’s really good from end-to-end. The Nikon 70-200mm f/2.8 AF-S VR II is pretty close at both ends of the zoom range, although perhaps a tiny bit better at 70mm than at 200mm, but seems a little softer in the middle of the range. At the 70mm range, though, it’s a bit better than the Canon, while the Canon is clearly better at 135mm. At 200mm, I’d call them different, but one is not clearly better than the other.

I was a bit surprised at the amount of copy-to-copy variation we see in both of these lenses; I had really expected better.

I don’t have a whole lot to say here except the results are pretty disappointing. The only Consistency score we would rate as excellent is for the Nikon at 70mm. On the other hand, at 200mm the Nikon has one of the lowest consistency scores of any game-brand lens. As usual, I expect a lot of people are going to start screaming about ‘better quality control’. I don’t think it’s that simple at all.

Theses 70-200mm zooms are incredibly complex inside. Given how excellent their resolution is, I suspect they’re engineered to very tight tolerances and some variation is inevitable given the state of manufacturing. We work on theses lenses pretty frequently and find there’s often a compromise in making optical adjustments. Get better than good at the 200mm end and you start to cause problems at the 70mm end, etc.

Put in perspective, even the weaker copies of these lenses are really good. Sure if you put a few side by side you’d find Copy 6 is sharper than Copy 10 — at one focal length. At another focal length chances are Copy 10 is sharper than Copy 6. It is the reality. You can either accept it, or go scream about it on the internet until you feel better (somewhere else on the internet instead of our comments section if you don’t mind). But you aren’t going to change it much. If you want the absolute best resolution at 200mm with great consistency, go buy a 200mm f/2.0 prime. Those have awesome resolution and little copy-to-copy variation.

I don’t like compressing data, but I have to admit I think these 2-D graphs are pretty useful. 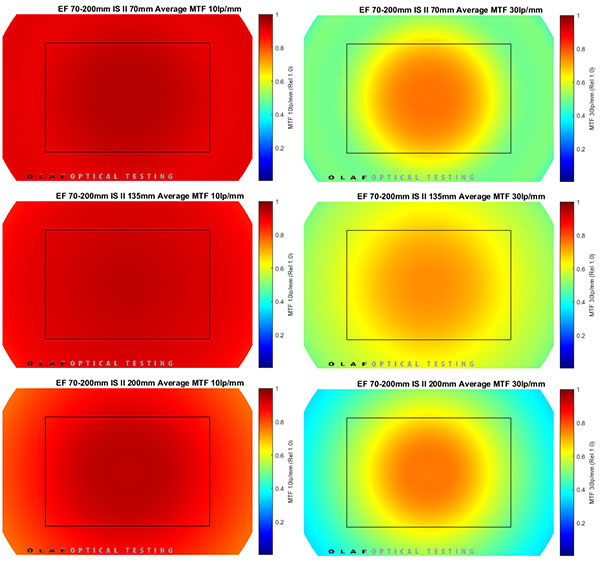 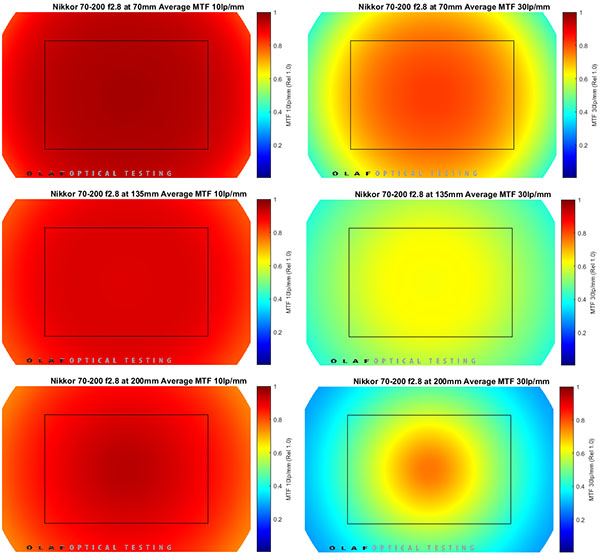 And that, my friends, concludes the database building part of our MTF and variation series. It ended with a whimper rather than a bang, I’m afraid. I had hoped for a better performance from these.

As we add new lenses we’ll be comparing them to these existing graphs and plots.