About twice a week I get a call from a photo-videographer wanting to know which photo zoom lenses in a certain focal length are parfocal (stays in focus while changing focal lengths). It’s understandable why they would ask; a superb photo zoom is 1/10th the cost of a good video zoom.

They get pretty mad when I tell them that none of them are. Often, they’ll tell me they know this lens is or that one is, because LensGuruGod1232 on their favorite forum shoots with this lens and says it is. They may even – if they’ve done some research – pull up an old article I wrote years ago listing some photo lenses that were parfocal and add that to the argument.

I have to tell them that article doesn’t count anymore. For one thing, parfocal is not an absolute definition. What is acceptable as parfocal to one person in one situation is unacceptable in another. Also, equipment has changed.  A lens that might have appeared parfocal on a small sensor shooting standard definition video may be obviously not parfocal on a large modern sensor shooting 4k video. Finally, I’ve gotten older and wiser. Some things I wrote about years ago, I now realize are, um, well, less correct than I would have liked.

Today I’m going to demonstrate something I’ve known for a while, but that I haven’t written about. Sorry about that, but there’s lots of stuff I know that I haven’t written about. You see, I like to have written, but I don’t really like to write. I also know a lot of you really don’t like to read, so I’ll put the summary of the article right here at the top so you don’t have to read any further.

The ‘parfocalness’ of a photography zoom has significant copy-to-copy variation.

If you want to read further, I’ll give you a numeric demonstration and talk about why this is so. But the useful conclusion is in that one line above. So, the next time LensGuruGod1232 tells you the Wonderbar 24-70 f/2.8 lens is parfocal, remember that only means, at best, that some copies of it are. If your standards or sensors are different than his, maybe none of them are.

We took 10 copies of a good quality zoom lens (the Nikon 70-200 f/4 VR) each of which had been optically tested and found to be excellent. Then we set the focal length to 70mm, and carefully focused it on our optical bench. Why the optical bench? Because it gives us a numeric read out of the best focus position. You could do the same test if you have a reasonably accurate focus collimator and 10 copies of a lens handy. 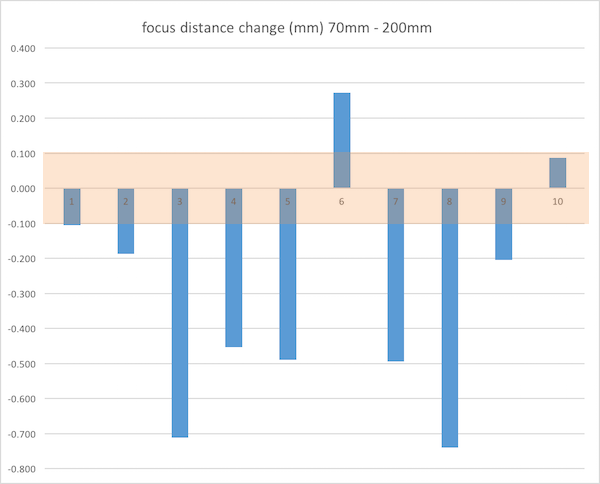 The point is that the amount of focus change while zooming varies from copy to copy. Some shift hugely, some just a little. Most shift to the negative side, a couple to the positive.

I put an orange box around the area where we felt you could, at least arguably, call the lens parfocal. This isn’t a scientific box, it’s just where the focusing reticle, to me, still looked reasonably sharp.

If you want a more scientific comparison, we can compare to what we see if we do the same test using a cinema zoom. (We do this with cinema zooms pretty often, when we are checking to see if they remain parfocal.)  If we average out the absolute change in best focus for the Nikon 70-200 f/4 VR in the graph above, when zooming from 70mm to 200mm it is 0.374mm. When we do the same test with a Zeiss 70-200 T2.9 lens the average change is 0.008mm.

Again, there are some photography zooms better than the Nikon as far as parfocal abilities. But there are none that we’ve seen that don’t have zoom variation. In other words, when someone says a photo zoom is parfocal, the truth is it’s not badly not parfocal, and even then there will be some copies that are more not parfocal than others.

Why Is This So?

The question really is, “How could it be otherwise”? Cinema zooms are made with a moving compensating group that has the specific purpose of maintaining focus while the lens is zoomed. This group is adjustable to make certain it compensates properly.

Photography zooms do not have anything like this compensating group. Additionally, as Aaron and I often see, when we adjust a photography zoom for the best optical performance we often change the ‘best focusing’ point at different focal lengths.

What’s the takeaway point? No photo zoom is going to be absolutely parfocal. Some may well be close enough for your purposes, but check the copy in your hands on the camera you’re going to use. Remember, when someone tells you a certain photo zoom lens is parfocal, that means their copy on their camera held to their standards.