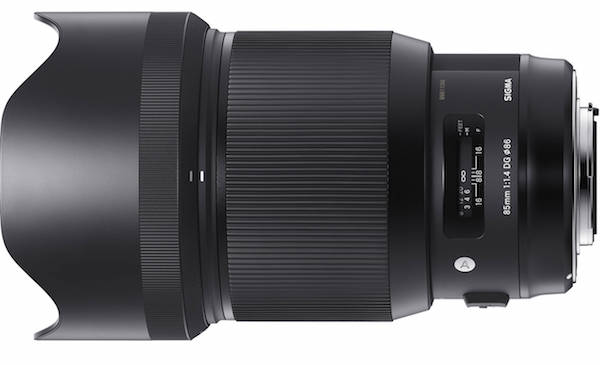 Yes, I know the Sigma 85mm f/1.4 DG HSM Art lens just too big for you; reading the online forums, you’d think it was about the same size and weight and a 600mm f/4 lens. It’s not, of course, although it is a hefty lens at nearly 40 ounces. But that’s just a few ounces more than a Canon 85mm f/1.2 L; a few less than a Zeiss 85mm Otus. So while it wouldn’t be my first choice for a backpacking lens, it’s not as wrist-breakingly huge as some make it out to be. (OK, full disclosure, backpacking isn’t my area of expertise. The closest I get to camping is staying at a hotel without room service).

While you guys get the ‘It’s so big’ jokes out of the way, I’ll point out that making a lens bigger is not a goal of the lens designer, but it is sometimes a necessity. If you want to get great optics and eliminate aberrations, you either need lots of pieces of glass or very expensive pieces of glass ground into very expensive shapes. The Sigma 85mm Art has 14 elements, compared to 8 for the Canon 85mm f/1.2, and eleven for both the Zeiss 85mm Otus and Milvus lenses. If you want to keep the price lower and the image quality excellent, then more glass is sometimes the compromise you make.

Of course, that explanation assumes that yes, they did make the image quality excellent. Given what we’ve seen from the rest of the Sigma Art line, I certainly expected this one to be excellent. And our Photo Guys article on real-world use certainly seems to suggest Sigma did the right thing with this lens. But I don’t trust what I see in photographs, so let’s get the optical bench out and see if it’s really so. (That was a joke for all the people who say ‘I don’t trust what I see in MTF plots, I want to see photographs.’ A joke.)

This is the MTF results generated in our usual fashion: 10 copies were tested, each at four different rotations, and all the results averaged to give you the MTF shown below. 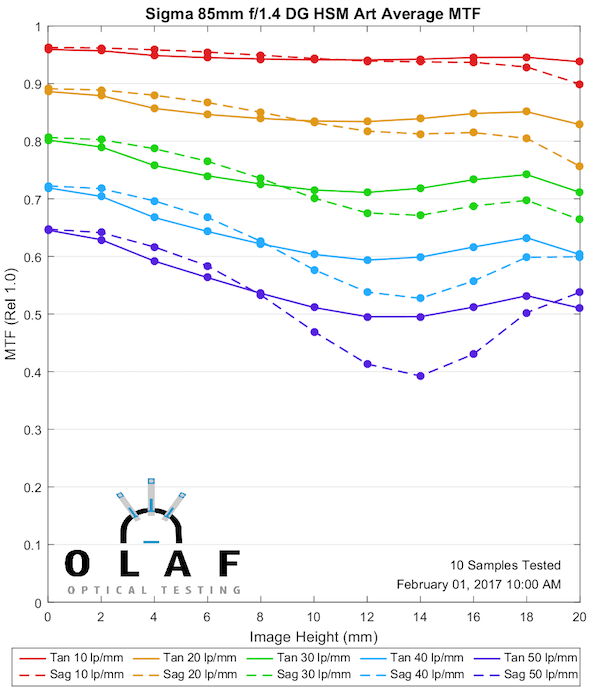 That’s most impressive to me at a glance, but it’s probably easier for you to be impressed if you look at some comparisons. So I’ll make some comparisons between the Sigma Art’s MTFs and some other lenses below. For those of you who don’t speak MTF, it’s pretty simple. “0” Image Height is the center of the lens, “20” is almost to the corner. Higher MTF is better, and if the dotted and solid lines are close together for each color, that’s good too. There’s a lot more to MTF, but that will get you by. 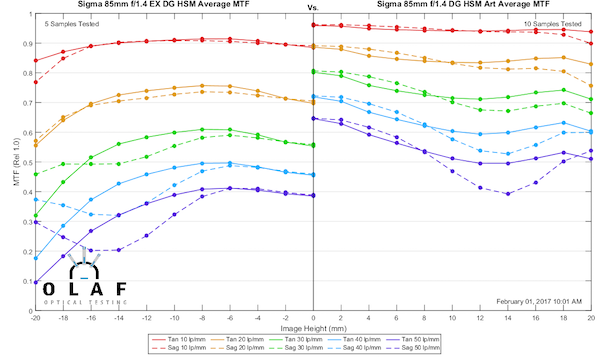 The Zeiss 85mm f/1.4 ZE is close to the Sigma in price and makes a good comparison – unless you’re comparing autofocus capabilities, of course. 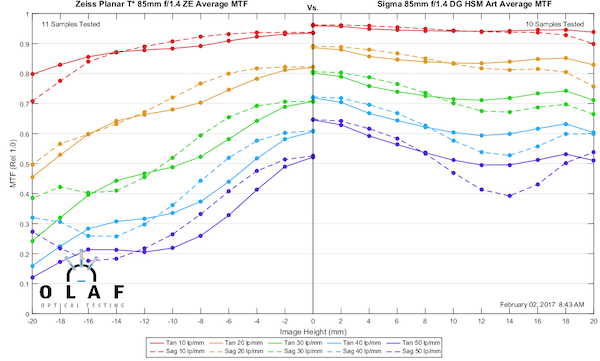 This one I have to give the edge to the Sigma. That’s not surprising, the Zeiss is a decades old design, and while it’s razor sharp stopped down a bit, it’s a little soft and dreamy looking wide open. It’s a good example of a lens people love for its unique look, rather than its resolving ability.

Well, sooner or later we had to compare it against the best 85mm we know of, the Zeiss 85mm f/1.4 Otus. I chose sooner. 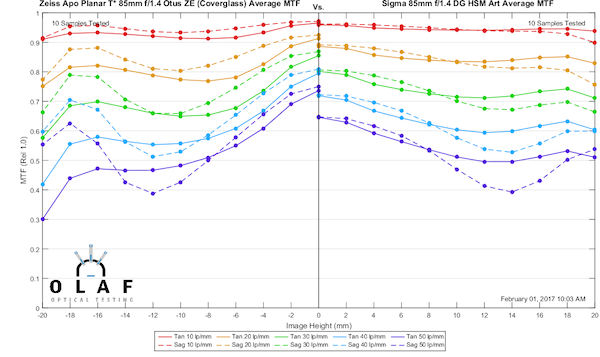 We’re still listening to outside consultants argue about the best way to present a variation number, so I’m going to stick with just using our variation graph. The Sigma shows excellent copy-to-copy variation control, as good or better than the Canon L, Nikon G, or Zeiss offerings in this focal length. 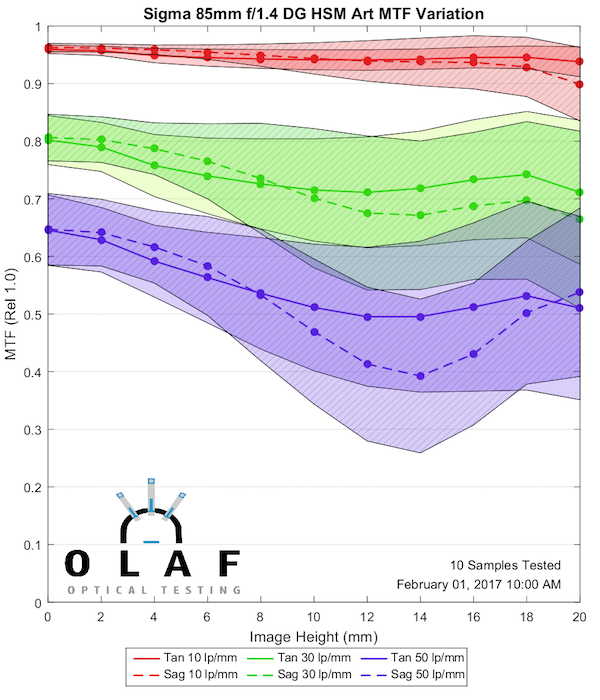 This was an MTF test. It was only an MTF test. Had this been an actual lens review you would have been instructed to purchase the Sigma from my affiliate link to help send my kids to college. As MTF tests go, though, this is just another ho-hum spectacular triumph for the Sigma Art series. From an MTF standpoint, it’s better than any other 85 except the Otus, and it makes a very respectable showing against that fine lens.

There’s a lot more to imaging than MTF. Even I, the ultimate MTF geek, know that. What we found out today is the Sigma is a really, really sharp lens at an excellent price. That makes it worth further investigation if you are thinking about an 85mm lens. It doesn’t make it the right choice for you, lots of other factors need to be considered. But the Big Beautiful Lens is worth a long, hard look.

I was so impressed with the BBL that I thought I would run Field of Focus graphs on it to. Color me impressed (the graphs are colorful, get it?). It is perfectly flat from one side to the other. Superb.