Announced from Zeiss today was the new Zeiss Batis 135mm f/2.8. You guys know I don’t like putting out MTF charts on less than 10-copy averages, but we had a chance to grab a Zeiss Batis 135mm f/2.8 prototype lens for a couple of days, so I tested it. And since we certainly aren’t going to get our hands on ten regular copies anytime soon (at least not to test) I thought I’d put this up. But keep it within reason: this is a prototype lens, and it’s one copy. So this is a hint of what we can expect.

While I don’t have a lot of comments about the lens itself, it handles, looks and feels like every other Batis we’ve touched, so you won’t have any shocks. It’s reasonably sized, too, and I expect a lot of people will be willing to forego that it’s f/2.8 and not f/2 in exchange for the more reasonable size you get with that. And others won’t. So it goes.

But here are the MTF curves of a single Batis 135mm f/2.8 lens, taken at four rotations and averaged. The reason that the sagittal and tangential aren’t perfectly lined up at the center is because of that; the optical center of the lens is about 1mm from the measured center. Since we rotate them and average, the slight difference shows up as space at “o”. When we do ten copies, that averages out.

The field of focus on the 135mm Batis is nice and flat, in both sagittal and tangential planes, as we would expect from a good lens at this focal length. 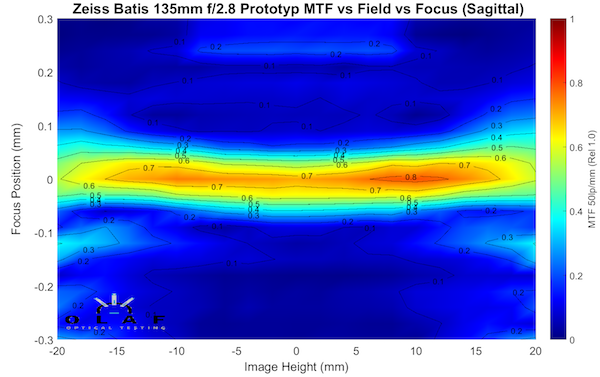 To give you an idea of what kind of MTF you get for your dollar with the new Batis, I’m going to also put up the MTF charts of the Zeiss 135mm f/2.0 APO-Sonnar and the Canon 135mm f/2.0 L. Remember, as always, reducing aperture improves MTF, so both of these other lenses would be at least a little better if they were tested at f/2.8 like the Batis is. 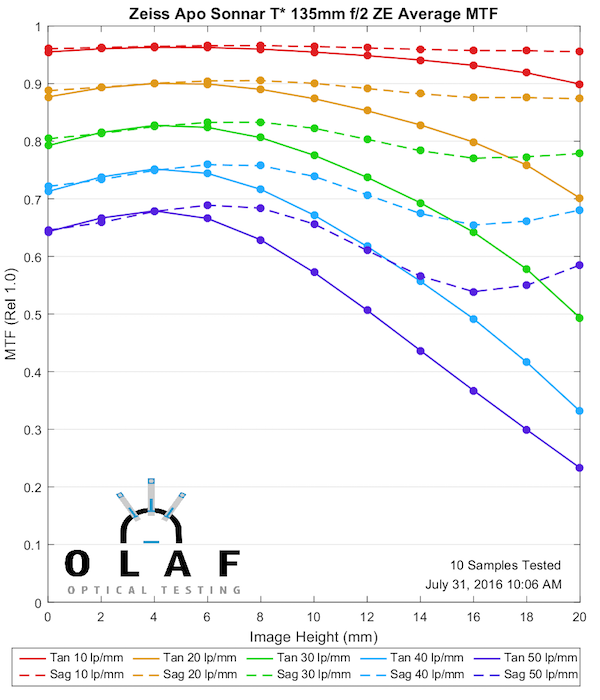 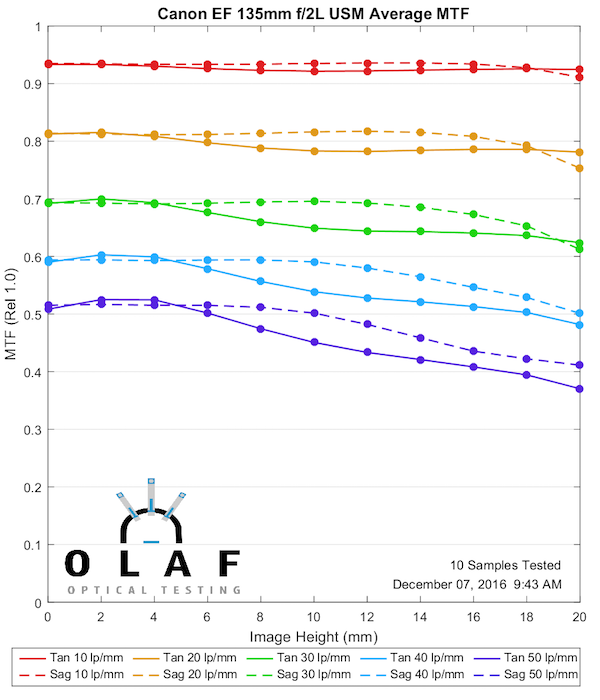 The Batis is certainly in the same conversation as either of these two lenses. As mentioned, they would both have a little higher MTF at f/2.8. I suspect the Canon, as wonderful of a lens that it is, would still lag just a bit, and the Zeiss APO-Sonnar would be a bit better compared to the Batis, but the differences would be minimal. Of course, the Batis isn’t going to shoot at f/2.0, and a lot of people want that aperture at this focal length.

We’ll get a cleaner look when we’ve been able to run ten production copies through our testing and put things on an even footing. This was, as mentioned, a prototype. But the initial results are certainly promising and are going to provide FE shooters an excellent native mount lens in a focal length where that wasn’t available before. Want to check it out for yourself? The Zeiss Batis 135mm is now available for preorder.