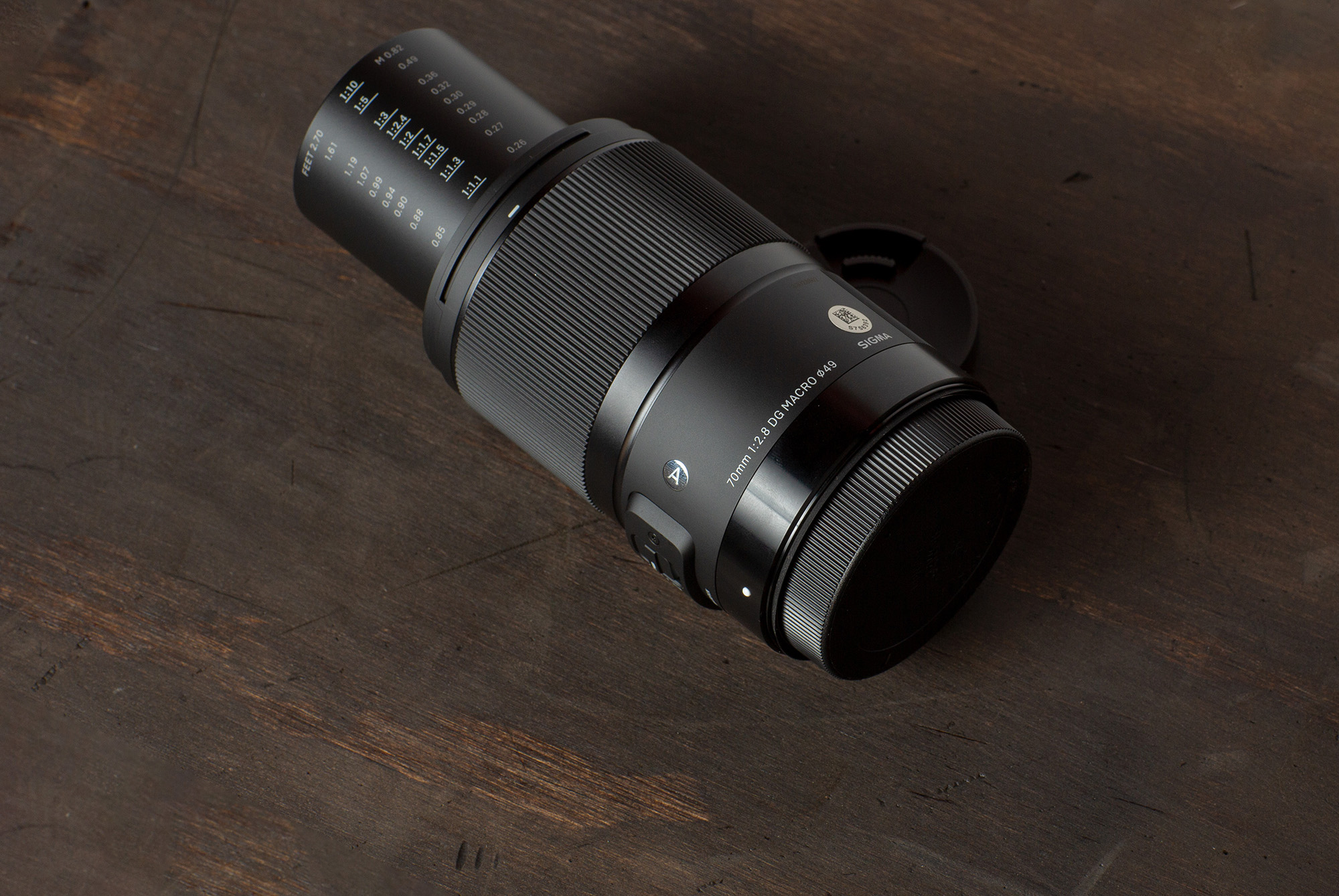 I love my Canon 100mm f/2.8L Macro lens. Since I got it six months ago from Lens Authority (after renting it half a dozen times for projects), it hasn’t really left my camera body. Though like most macro lenses I’ve used, it’s a bit slow to focus, and can be a little fickle when using in low light conditions. And since I’m a man of options, I was incredibly excited to see when Sigma announced their first specialty (in the sense of macro, tilt-shift, etc.) lens in their Art Series Lineup, with the Sigma 70mm f/2.8 Art series Macro. 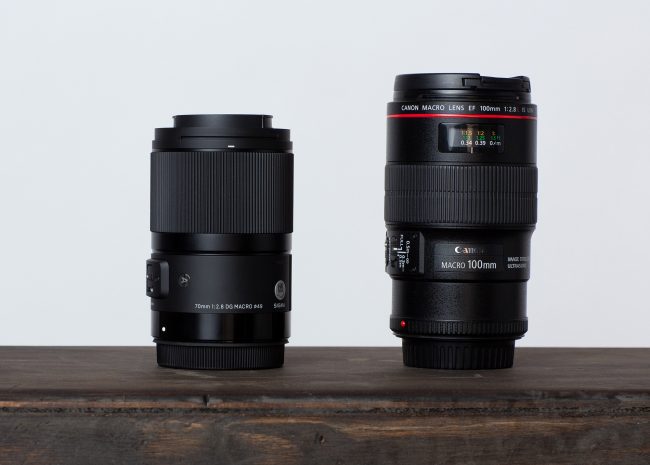 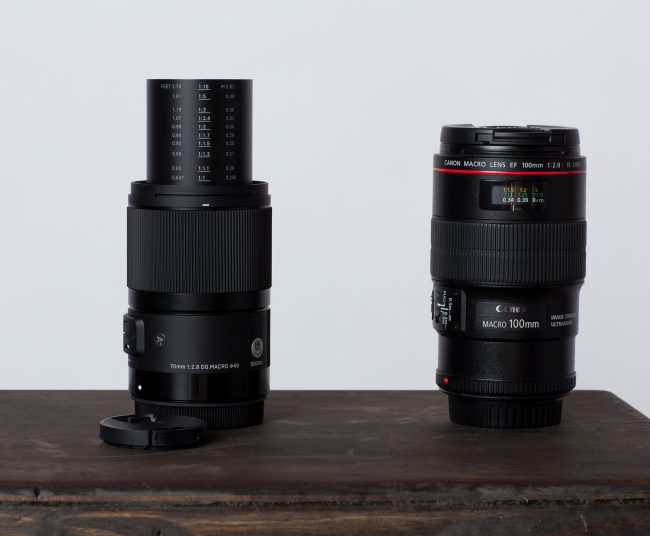 If you’ve been living under a rock over the last five years or so, Sigma has rebranded from being a third-party line for the price conscious, into becoming a competitor to the premium lens options regarding sharpness. And they did all of this while beating the pricing of the competition, giving us top-tier optics that won’t necessarily cost you an arm and a leg. 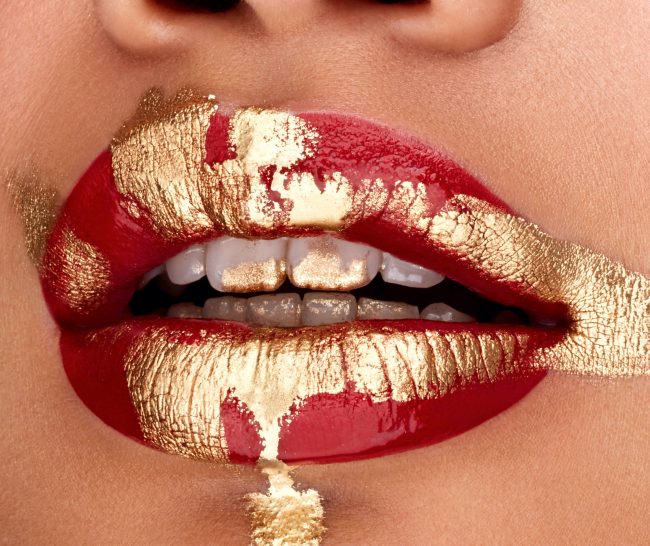 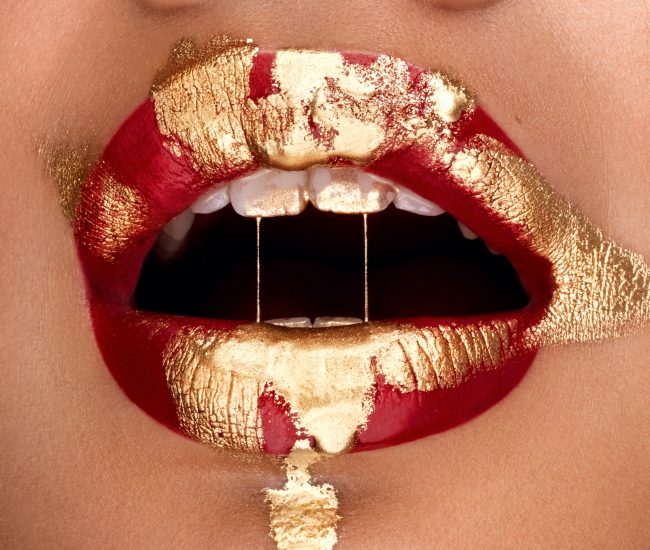 How they did this, by in large, was with subtle compromises. For one, none of the Art series lenses are listed as being weather resistant. Another commitment that Sigma will often take is not to make sacrifices to the optics to create a more convenient lens. What do I mean by that? Well, one prominent example of this is with their Art series 85mm f/1.4. It’s huge across the board. Filter size? 86mm. Weight? Much heavier than the competition. The lens even outsizes the Canon 85mm f/1.2L II and Sony 85mm f/1.4 G Series. For those who are putting optics first, these compromises are minimal, and the cost difference between the competitors more than makes up the lack of a rubber gasket on the lens mount. And that size change allowed them to top most of the competition in sharpness.

And that is why I was so excited to see Sigma branch off with the announcement of their Sigma 70mm f/2.8 Art Series Macro. So enough pandering, let’s take a look into the latest in Sigma’s offerings. 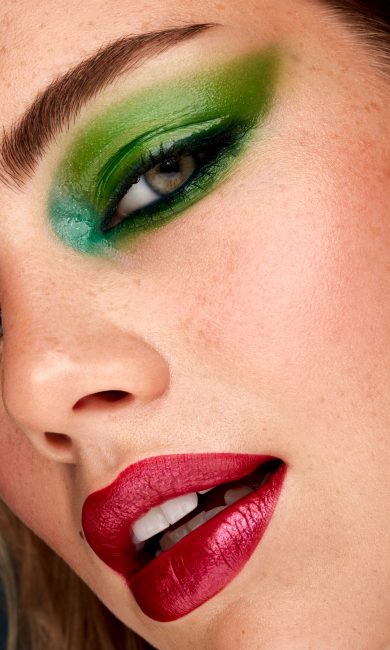 Note: This review is a practical look into the usability and functionality of the Sigma 70mm f/2.8 Art Series. If there is enough interest, perhaps Roger will do MTF testings of this lens and compare it to the competition within the macro realm. 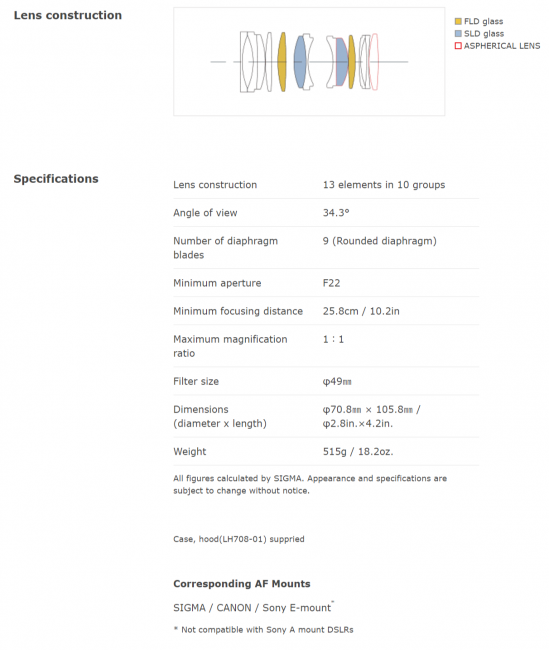 Sigma has built a reputation for creating sleek and sexy lenses, particularly in their Art Series, and this lens is no exception. Smaller in size than you might expect, the Sigma 70mm f/2.8 Art Macro shares the same matte black stylings of the entire lens lineup and holds itself in a rather compact design. 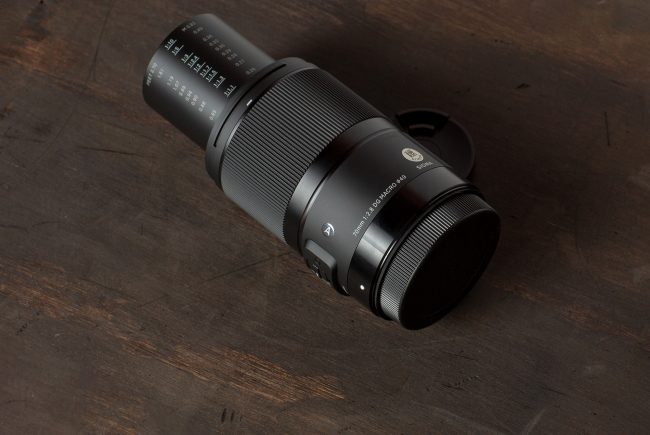 But compact only when not in use. When in use, the barrel will extend, quite a bit in fact, that helps achieve the macro functionalities of the lens. The idle position of the lens sits at 4.17 inches (10.6 cm) in length and extends an additional ~2 inches (5 cm). This change in size is considerable given that the lens is pretty small in design, and is undoubtedly the first thing you’ll notice when using it for the first time. The lens continues it’s size identity crisis with its incredibly small 49mm filter thread size. That said, I’d opt for a small filter size than an oversized one (looking at you, behemoth 86mm filter size on the Sigma 85mm f/1.4 Art Series). 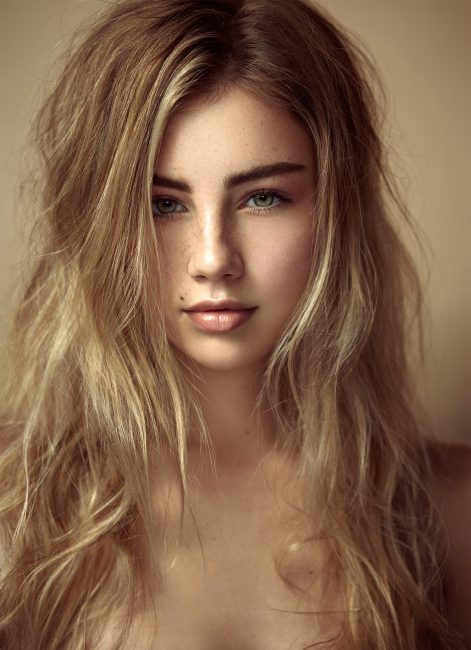 Along with the small size, the Sigma 70mm f/2.8 Art Series packs a fly-by-wire focusing system, which is a bit of a challenge to get used to. The fly-by-wire focusing system (the same system found on the Canon 85mm f/1.2L II for example), gives you a lot of precision when manually focusing, which isn’t too uncommon when shooting macro. However, it does have some shortfalls also.

First, it’s a slow focusing system, leaving autofocus to seek a bit more than usual in low light conditions. This isn’t a particularly big problem, as I’ve never found macro lenses to be incredibly fast when focusing. Secondly, it means the lens needs to have power to extend or contract the barrel. A minor nuisance. To counteract the slowness of the focusing, the Sigma 70mm f/2.8 Macro Art Series has a split in the focusing ranges, like most macro lenses. For macro use, it’s suggested to flip the switch to the 0.258-0.5m setting. Anything else should be set to the 0.5m – infinity. 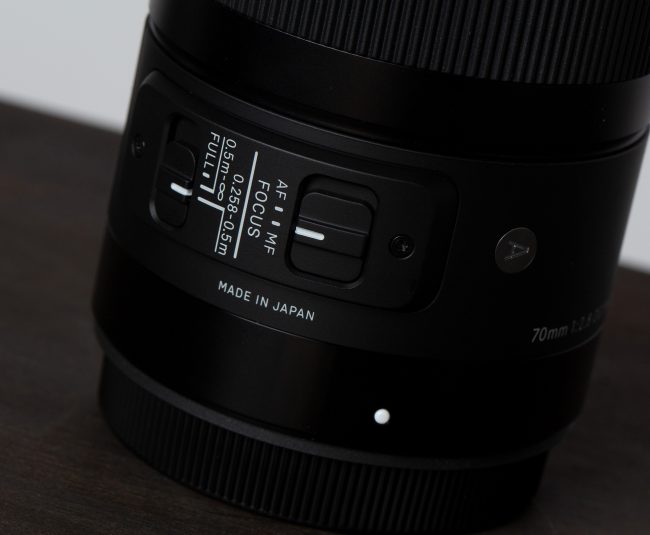 But these complaints are perhaps more about me being stubborn and resisting my love more than anything else; cause at the end of the day, the best feature of the Sigma 70mm f/8 Macro Art Series is its incredible sharpness. The Sigma 70mm Art Series was able to keep up with the Canon 100L Macro, despite having a better price point – a habit Sigma has developed with their latest offerings. When shooting macro, you’ll find yourself at f/14 and beyond, to help minimize some of the depth of field you lose at extremely close focusing distances. And when I stopped down the Sigma 70mm f/2.8 Macro, I really started to see this little lens shine.

However, this lens does have one fatal flaw that I encountered when using this lens for the macro beauty work that I often shoot – the focal length. The 70mm focal length on this lens is frustrating to use for macro work, especially when using off-camera lighting. In short, the focal length requires you to get in close to get 1:1 magnification; about 10 inches to achieve the true 1:1 macro capabilities. And when you get that close, you end up blocking a lot of the light on your subject. For reference, the Canon 100mm f/2.8L IS, and the Canon 100mm f/2.8 Non-L Series both have a 1:1 focusing distance at about 12 inches. 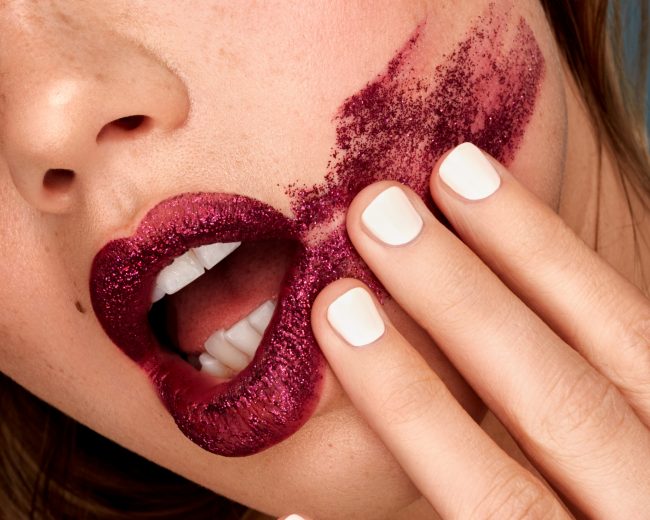 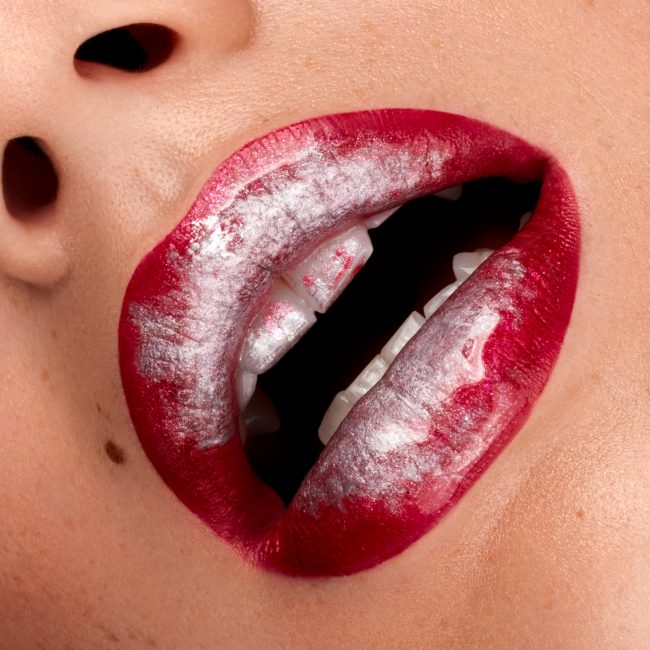 And those two inches mean a lot when you’re working in small confined environments and using lights that are actually behind your lens. More often than not, when shooting with the Sigma 70mm f/2.8 Art Series lens, I found myself getting in my own way when trying to get the tight 1:1 macro reproductions. And this is because of how that number is measured. The 10.2-inch focusing distance is measured at the sensor plane, not at the end of the lens. And when shooting at 1:1 macro, the lens is just over 6 inches in length (with the barrel fully extended), meaning you’re incredibly close to your subject. For comparison, the Canon 100mm f/2.8L Macro IS is shorter in length and has a larger focusing distance for 1:1 reproduction, giving you more space overall.

So is it Worth It?

Sigma’s freshman release of their specialty lenses within the Art series is no doubt an impressive one. As an avid fan of the Canon 100mm f/2.8L IS, I went into reviewing this lens with a bit of skepticism and was quite surprised by the end of it all. Is it better than the Canon? Probably not; though I’d be interested to see Roger’s more scientific MTF testings on it. But at a price of $567 for the Sigma (verse $750 for the Canon), it’s hard not to recommend this lens to someone who is looking to play with Macro photography without putting too much money into it. At $567, you get an incredibly versatile and incredibly sharp lens that is continuing the legacy of the Art Series badge.