Why Side-Mount Buttons and Ports Break on Cameras 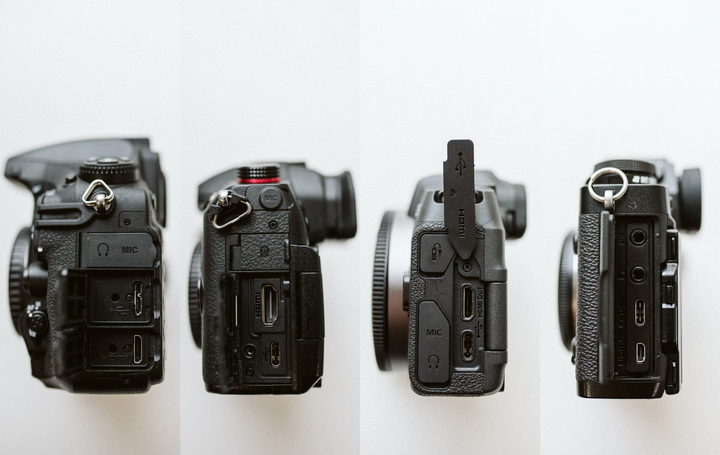 We spend a lot of time fixing broken stuff. As sort of a side gig to that, we advise some manufacturers about what is likely to break or is regularly breaking. We offer our input to all manufacturers; some are interested in it, and some don’t give a flying damn. For free, we blog about it, too. Some people are interested; some just go “I had one, and it didn’t break.”  We had hundreds of whatever, and most of those didn’t break either. But when 15-20 out of 100 breaks, as opposed to 1 out of 100, we tend to look for why.

Most electronics (as opposed to optics) manufacturers design their product and outsource the manufacturing to the lowest bidder. Manufacturing costs for the circuit board, chips, and cases are pretty inconsequential; what you’re paying for is the smart ideas, the software/firmware, and circuitry it runs on.

Very, very few of the electronics manufacturers actually have a service department. If you send something in for repair, they replace it with a new one (although they may call it refurbished), either under warranty or for a repair fee. If the device has some expensive other components (usually an LCD or OLED screen), they may have a tech who pops the case open and replaces bad circuit boards. A lot of these devices don’t even have openable cases; the last step in manufacturing is gluing the two halves of the case together.

Why do you care? I mean, if they’re going to replace it under warranty, what’s the difference? No difference, except the keyword in that last sentence is “if.” Warranties run out, and with most of these devices, you’ll have to buy a new one if it gets damaged after that. Sometimes, profits start falling and suddenly ‘user damage; warranty void’ takes the place of ‘replaced under warranty.’

When the selling company doesn’t care about construction (they are software/electronics people, after all), you get some fragile stuff being manufactured. That is the way of the world now, and I understand that – I live with it more than you, I promise. When the company stops replacing damaged items, we start opening the broken ones to see if we can repair them ourselves.

One thing that’s just about guaranteed to fail on every electronic device is side-mount buttons and side-mount I/O ports. When we stock products with such buttons, we just assume they’re all going to break. The whole purpose of this post is so you can make that same assumption.

What Do You Mean By Side Mount Buttons?

Electronic devices come in all kinds of shapes. One of the popular shapes is like a large deck of cards; a flat cuboid (flat box). If the device shape is a flat box, you can be pretty sure the circuit board inside fills up the bottom of the box. There’s probably at least an on-off button communicating with the electronics. There are two ways to mount the button; on top, pushing it down toward the circuit board, or on the edge of the circuit board, pushing from the side. What’s the difference? Well, lots.

Notice the switch has little wire legs that are attached to the circuit board because electrons are flowing and all. They’re just wires soldered to the circuits on the board, but in addition to serving as your electron highway, they are also the only thing that holds the switch on the board in 95% of these devices.

What does it look like in real life? Here’s a top view of a typical side switch; you push the switch, and the piece of plastic pushes the button that’s part of the switch. 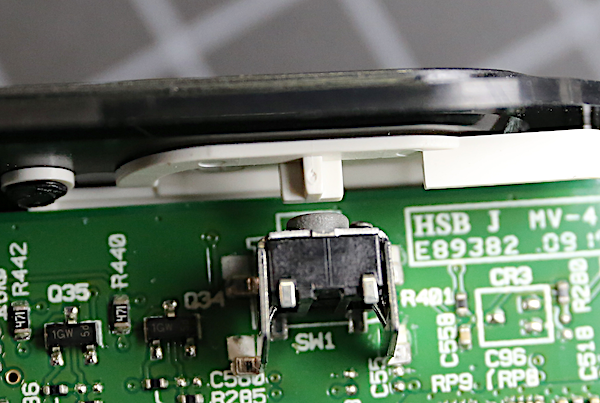 Lots of devices have side switches. 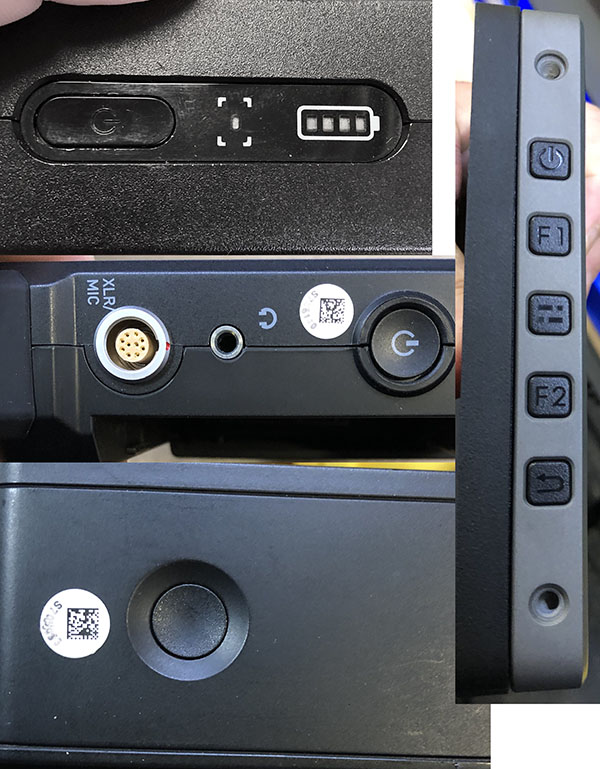 Nowadays, where tiny little robotic elves make all circuit boards, they’re all flush soldered to the top of the board. Wait, not all. Some are just stuck onto the board with conductive glue. Conductive glue is an excellent conductor, but a not very good glue.

Now is where you say, “But surely the manufacturer has put some braces and things on that switch so you can’t just rip it off the circuit board.” And where I say, “Why would you think that? Did you see any brace in that picture above?”

Let’s look at the opposite of a push-button; some I/O ports.

This device has six I/O ports side-mounted. If you glance at it, you’ll see the two SDI ports on the right side, and the two mic jacks on the top have all have bolts holding them to the side of the case. They aren’t going anywhere.

The HDMI ports, though, are soldered to the circuit board and poke out through a hole in the side. In theory, of course, you don’t put as much pressure inserting or removing and HDMI cable. Theory, however, never broke down the set at the end of a shoot; minimum-wage gaffers do that. They are as gentle and delicate as a fart in a sports car.

Back to my push buttons, though, there’s usually something holding the button in place. How much something? If you haven’t looked inside, you have no idea, but it rarely is what you’d call robust. Here’s a close up of a typical side-mount push button. The clear plastic piece is a light guide; the feet sit over LEDs surface mounted to the circuit board and carry the light up to make the button glow when the device is on. 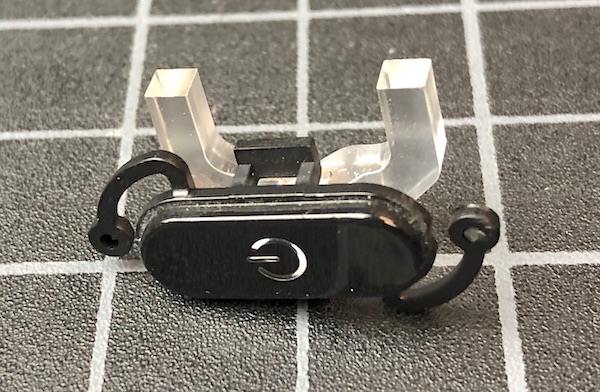 The two black plastic wings on either side hold the button in place, both providing that springy feel but also keeping you from shoving it too far. I don’t have the test equipment to tell you their breaking point in Newtons, but I can tell you that you can put one under your fingernail, snap it like a twig, and never feel it.

If you flip the button over, that light guide is held in place by an even thinner bit of plastic that it snaps into. I have been unable to break that piece by just looking at it, but I can assure you anything other than looking at it will break it. (The top that you see is about four times thicker than the depth, which we measured at under 0.2mm.) 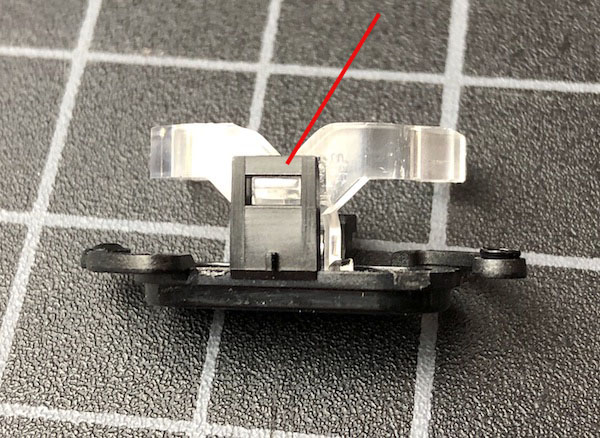 So what happens if you push the switch frequently, or a bit too hard and bend or break the plastic retainers? Well if you scroll back up to the picture above, you’ll see that nothing holds the electrical switch on the circuit board but the solder it was put on with. The solder is not strong, and the metal traces on the circuit board itself are even weaker. So this is what things look like after a too-hard push or the retaining springs weaken. Oops. 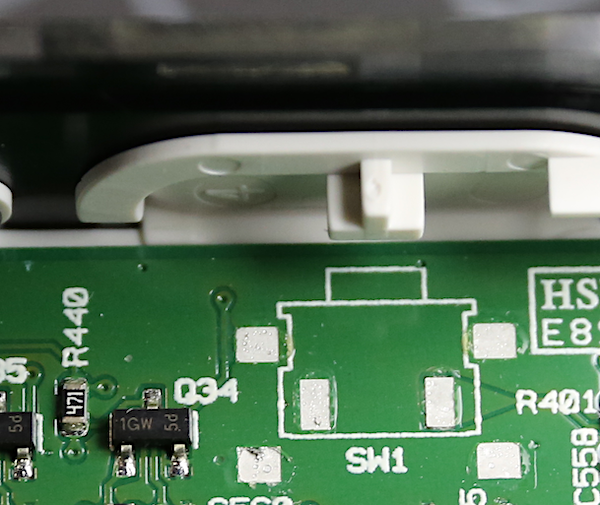 In this case, the switch was utterly free, rattling about the case. Sometimes they just bent up off of their traces; they don’t rattle, but they don’t turn on either. While this is most common with on-off buttons, it’s also a reasonably frequent event with HDMI and micro-USB ports. Don’t get me wrong; reasonably frequently for us means 6 or 8 out of 100 devices per year. If you have one, it will probably last years before a switch breaks, as long as you’re reasonably gentle.

For those of you who wonder why we don’t just resolder the switches to the boards, it’s not that simple. Robotically assembled boards use precision solder that is difficult-to-impossible to resolder by hand. In most cases, even if we could spot solder, the boards conducting traces were damaged when the switch pulled off, and the board still needs to be replaced.

So Why Bother to Tell Us?

Mostly, this article is a warning. Don’t repeatedly push side switches, and don’t push them hard. They don’t give a lot of tactile feedback, so you may be tempted to push too hard. This can be worse with some devices that take a second or two to power up after you push the on-off button; people tend to push again harder during that second or two.

Also be gentle with cables in your USB micro or HDMI ports, too. Yanking them out seems to be the biggest problem here, but you can break off a port by forcing a cable in, also.

Sometimes it’s hard to tell, just looking at a device if a switch is on the side of the circuit board or not. The shape of the device is a giveaway for smaller devices, but not always for larger ones. In those cases, a row of switches or I/O ports (or both) is a good hint. If they’re putting switches on a side mount, they’ll probably line them up in a row.

Most importantly, don’t just ask the manufacturer what their repair policy is; check online to see if other consumers have some experience with it. Saying ‘5-year warranty’ doesn’t matter if they’re going to call all switch failures abuse or misuse. Some companies put existing customer service first; others are more interested in marketing to get a zillion new customers.