What’s Changed? The Blackmagic Micro Converter BiDirectional SDI/HDMI 12G not only retains BMD camera control, timecode, 3D LUTs, and expanded format and frame rate support found on the 3G model, it also adds support for DCI/UHD 4K60 in SDI and HDMI. This converter is USB-powered but has adopted USB-C for both power and software configurations through the app.

User-Configurable Software. This converter has user-configurable settings that can be accessed using the free Converter utility from Blackmagic. Through the utility you are able to change the converter name for easier identification and even set camera numbers for camera control between select BMD cameras and switchers.

SDI Reclocking. The Micro Converter offers reclocking on the 3G-SDI input, which reduces jitter and improves SDI eye pattern before the signal is processed. This improves performance over long cable lengths.

Mounting Options. This compact converter has a durable metal housing and includes power and signal LED status indicators. The Blackmagic converter box itself has no means of mounting, so we made a custom bracket that allows you to mount the converter with either male or female 1/4-20" threads. 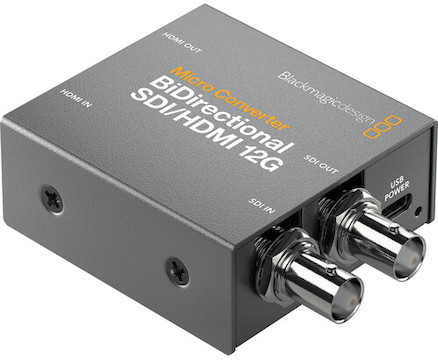