The 50D boasts 15 megapixels shooting at 6.3 frames per second. Digic 4 processors allow 60 jpgs shot at this rate before the buffer fills. There is also now integrated vignetting correction built in to the camera.

Additionally, it has an upgraded 920,000 pixel 3" LCD perfect for using its advanced Live View function with Face Detection mode. Standard ISO shoots up to 3200 (and looks pretty good doing it) with expanded ISO to 12,800 allowing for low light shooting (but doesn’t look good doing it). Auto-metering is also improved with a 35 zone system linked to the focus points.


Before I had the chance to shoot with this camera, I was rather surprised to see the internet forum posts pretty equally divided between “it totally sucks” and “it’s absolutely great”. After shooti...

Before I had the chance to shoot with this camera, I was rather surprised to see the internet forum posts pretty equally divided between “it totally sucks” and “it’s absolutely great”. After shooting with it I now understand: it’s all about expectations. Those who were expecting it to handle high ISO like a Nikon D3 are bitterly disappointed. They should be— their expectations are unreasonable. A high megapixel, crop frame camera is NOT EVER going to be as good at high ISO as a medium megapixel, full frame camera. So, as is always the case, unreasonable expectations lead to inevitable disappointment.

I’m actually pretty pleased with the 50D. It has some nice improvements over the 40D: the LCD is hugely better, as is the Live View implementation. The image quality is excellent and it seems to have pulled off a difficult (if rather unappreciated) feat by increasing the number of megapixels 50% while maintaining about the same ISO performance and dynamic range as its predecessor. It also adds microfocus adjustment which allows you to tune the camera for your lenses—something people don’t appreciate until they’ve had the chance to do it and see the difference it makes.

Now let’s compare apples and apples: the 50D does nearly as well as the Nikon D90 or D300, crop frame cameras with lower pixel density. It’s not as good as a 5D (which has much larger pixels) but clearly better than the Sony A900, a full frame camera with similar pixel density. It’s not even in the same world as the Nikon D700 or D3, but there’s no way it could be, since its pixels are half the size.

The real world negatives: there have been several reports that AI Servo mode on the 50D results in a lot of missed shots, bitterly reminiscent of early reports of the 1DMkIII. I didn’t do that kind of shooting with the camera, but I learned my lesson after the 1DMkIII— I tend to believe the reports and would hesitate to recommend the 50D for that type of shooting. 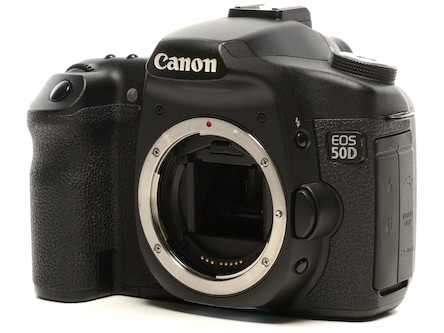