The nanoFlash is a portable HD/SD recorder/player designed to mount on a camcorder, recording higher quality images than the camera itself, using the camera’s uncompressed 4:2:2 HD-SDI or HDMI output recording at bitrates up to 180 Mbits/sec. The nanoFlash records the video/audio as MPEG2 at user selected bit-rates, using Long-GOP or Intraframe recording, in native Quicktime for Final Cut Pro, or MXF for Avid, Sony Vegas, Edius and other non-linear editors.

The nanoFlash includes both HD/SD-SDI In and Out as well as HDMI In and out. The HD/SD-SDI connections are made via a standard BNC connector, while the HDMI I/O uses the new type C mini-HDMI connector. Video and audio are recorded to Compact Flash cards. According to the manufacturer, the included battery pack will last up to 3 hours, depending on load. 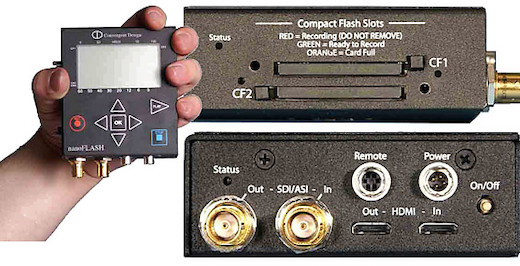